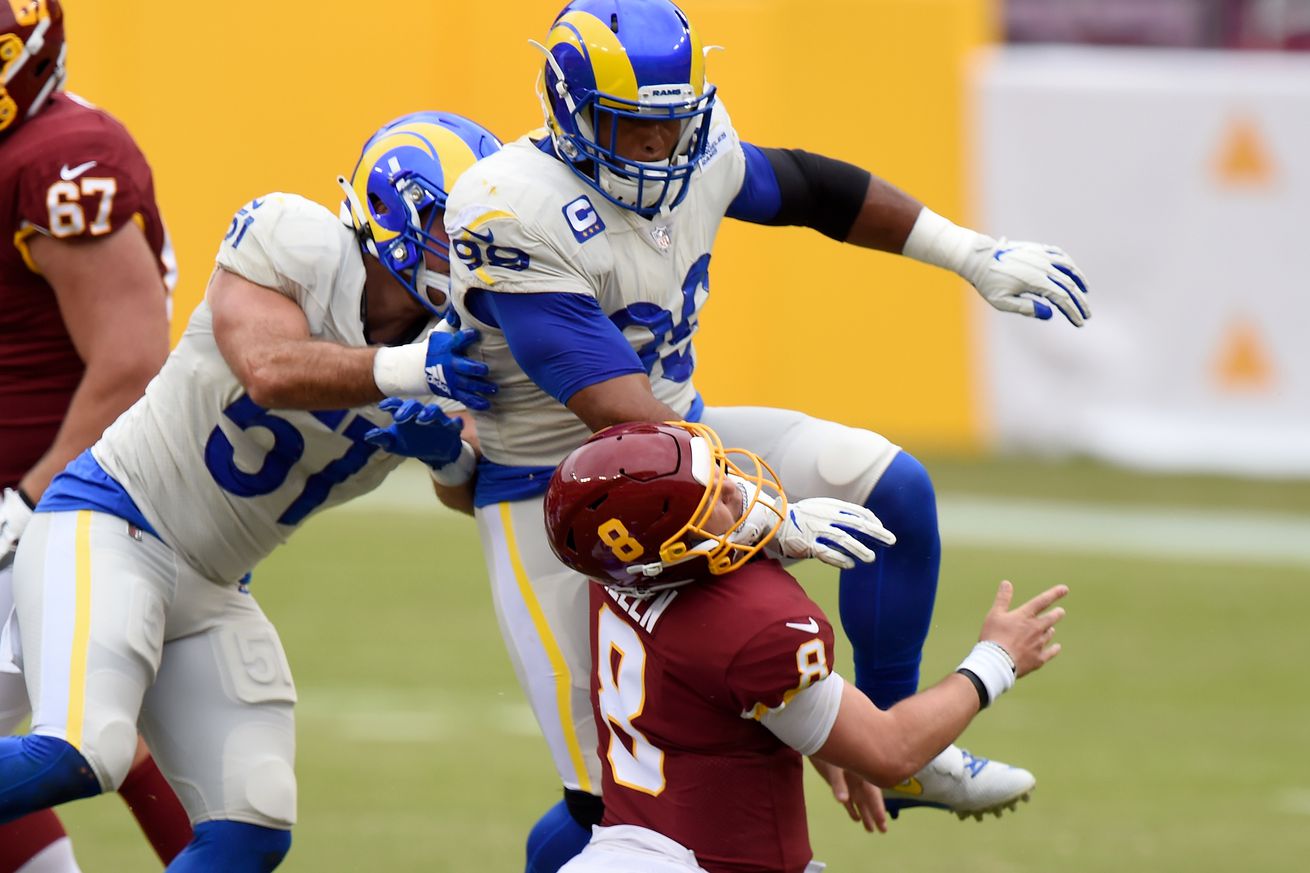 The Pitt alum matched a career high with the four-sack game and now leads the NFL with 7.5 sacks in five games

Pitt alum and Los Angeles Rams star Aaron Donald was already off to one of the best starts to a season in his career in 2020, with 3.5 sacks and 10 quarterback hits in four games. But on Sunday, he found another gear and brought down the Washington Football Team’s signal-callers on four occasions, matching a career high for sacks in a game.

Donald’s first sack of the game came halfway through the second quarter, when he tore through the offensive line and took down Washington quarterback Kyle Allen for a loss of 10. The defensive tackle was double-teamed by Geron Christian Sr. and Wes Martin on the play, but there was ultimately little the two linemen could do to stop him. Washington would make up half the yardage on the next play, but the team would gain nothing on third down, bringing up a punt on 4th-and-15.

Excuse me, @AaronDonald97 coming through

With just under two minutes remaining in the half, Donald sacked Alex Smith, who came in for an injured Allen. The play pushed the team back four yards and forced a punt on 4th-and-8. The sack was also somewhat controversial, as Smith was making his return from a serious leg injury and Donald jumped on his back. Smith’s leg held up fine, and he finished the game for Washington. But he would see more of Donald before the day was done.

Donald once again got to Smith on Washington’s first drive of the second half, costing the team another seven yards and forcing a punt on 4th-and-20. Then, with under seven minutes remaining, Donald forced a fumble while sacking Smith, and while he initially set Washington back eight yards, the team regained six yards after recovering the ball and punted it away on 4th-and-12.

With the four-sack performance, Donald matched his career high for sacks in a single game, which he set in a 39-10 win over the San Francisco 49ers on Oct. 21, 2018. That game stood out in arguably the best season of Donald’s career not only because of the four sacks, but also because of Donald ripping the ball out of 49ers running back Matt Breida’s hands and recovering the fumble in a single motion. In 2018, Donald would lead the NFL with 20.5 sacks and win Defensive Player of the Year for the second year in a row.

While coming up with four sacks in a single game is an outstanding individual achievement, the Rams defense as a whole played phenomenally, holding Washington to 108 total yards of offense. That had a lot to do with the pressure applied by Donald, but he wasn’t alone, as Troy Reeder also had three sacks for the Rams and the team totaled 10 tackles for losses en route to a 30-10 win.

With the win in the books, the Rams now sit at 4-1 and rank second behind the Seattle Seahawks in the NFC West, and Donald leads the league with 7.5 sacks. He also has 13 quarterback hits, 17 tackles, six tackles for losses, two forced fumbles and one fumble recovery in a matter of just five games.