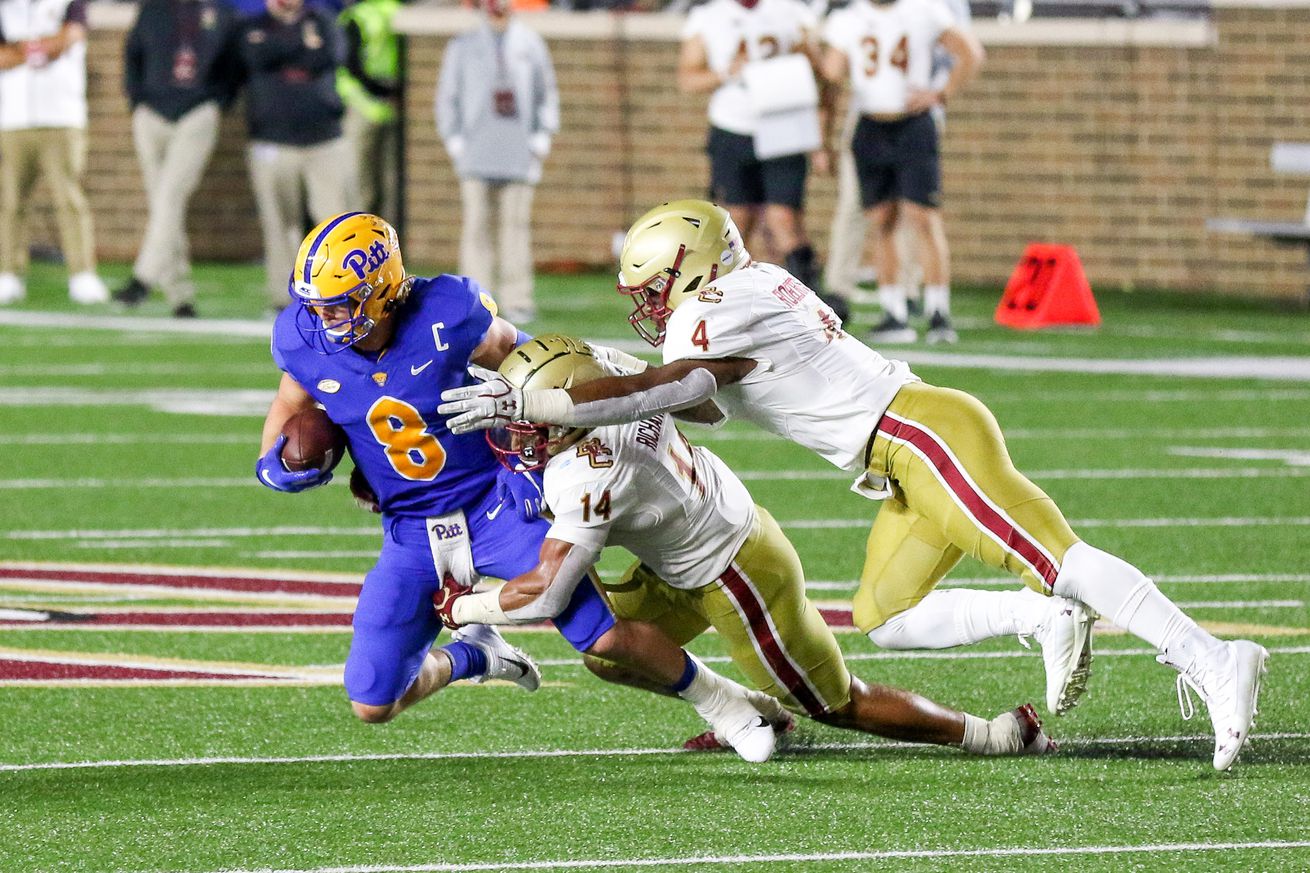 Pitt quarterback Kenny Pickett put on a heroic performance in his team’s 31-30 loss to Boston College, gutting out first-down runs on an injured ankle and keeping Pitt alive with several big overtime plays. But all that came at a cost, as Pickett’s status for Pitt’s game with Miami on Saturday is currently up in the air.

“Kenny, he’s banged up,” Pitt head coach Pat Narduzzi said in a Monday press conference. “But he was a lot better yesterday than I thought he might be. We’ll see what happens at practice this week, but the one thing I know about Kenny is he’s tough as can be. You talk about nails, that guy — that last run he had down on the goal line, he’s tough, and it’s going to be hard to hold him out, that’s for sure.”

Pickett, who was injured late in the Boston College game, is arguably Pitt’s most important player, not only as the team’s quarterback, but as one of the only consistent playmakers on a flawed offense. He currently leads the nation in passing yards, with 1,389 yards, despite the fact that his receivers entered the Boston College matchup averaging four drops per game and were on pace to match Pitt’s FBS-high 44 drops from the 2019 season.

In the event that Pickett is unable to play against Miami, Pitt could quickly find itself in trouble, as the team’s backup quarterbacks remain largely untested at this point. It is also not entirely clear who would get the start.

Behind Pickett on the Pitt two deep, Davis Beville and Joey Yellen are separated by an “or,” meaning neither one has beat out the other to take the reins on the backup role. Beville and Yellen have both seen the field this season, as they completed a combined five passes against Austin Peay, but their arrival on the field coincided with a drop in production.

In fact, Pitt scored just once in five second-half drives against Austin Peay during which its offense was led by its backups, and it primarily opted to run the ball, exposing what has been a lasting weakness of the offense. The lone second-half scoring drive against the Governors was led by Yellen, for what it’s worth, but Vincent Davis scored on a run.

For his part, Narduzzi is also uncertain who he would start if Pickett was held out.

“You know, we’ll find out,” the coach said. “I don’t think you really grow until you get your feet wet. Davis has walked in and taken a couple snaps and been solid. He hasn’t had a chance to get in a rhythm of a football game, and then last week, obviously Joey came in and took a couple snaps and took us in the end zone, but it was a running game. No one has really seen him throw the ball yet. We were lucky that Kenny came right back after a couple snaps and a series on defense.”

“I don’t know who [the No. 2 quarterback] is right now,” Narduzzi added. “But every week we try to figure that out, and it depends on how good of a week every quarterback has, and whichever quarterback has the best week will be that first guy to come in.”

Whoever lines up under center for Pitt will have their work cut out for them this week, as Miami has been among the most productive team’s in the nation this season. Prior to facing Clemson’s elite defense last week, Miami was averaging 43.3 points per game. While that average has fallen to 36.8 and the team dropped from seventh to 13th in the AP poll after losing to the Tigers 42-17, the Hurricanes will be eager to rack up points against a Pitt defense that has been unable to stop weaker offenses over the last two weeks.

As a result, it may well be incumbent upon Pitt’s quarterback to put up more points on Saturday than the team has in any game all year. And while that is at least feasible for Pickett, it would obviously be a taller order for either of his backups. Given that, much will depend on Pickett’s status on Saturday.