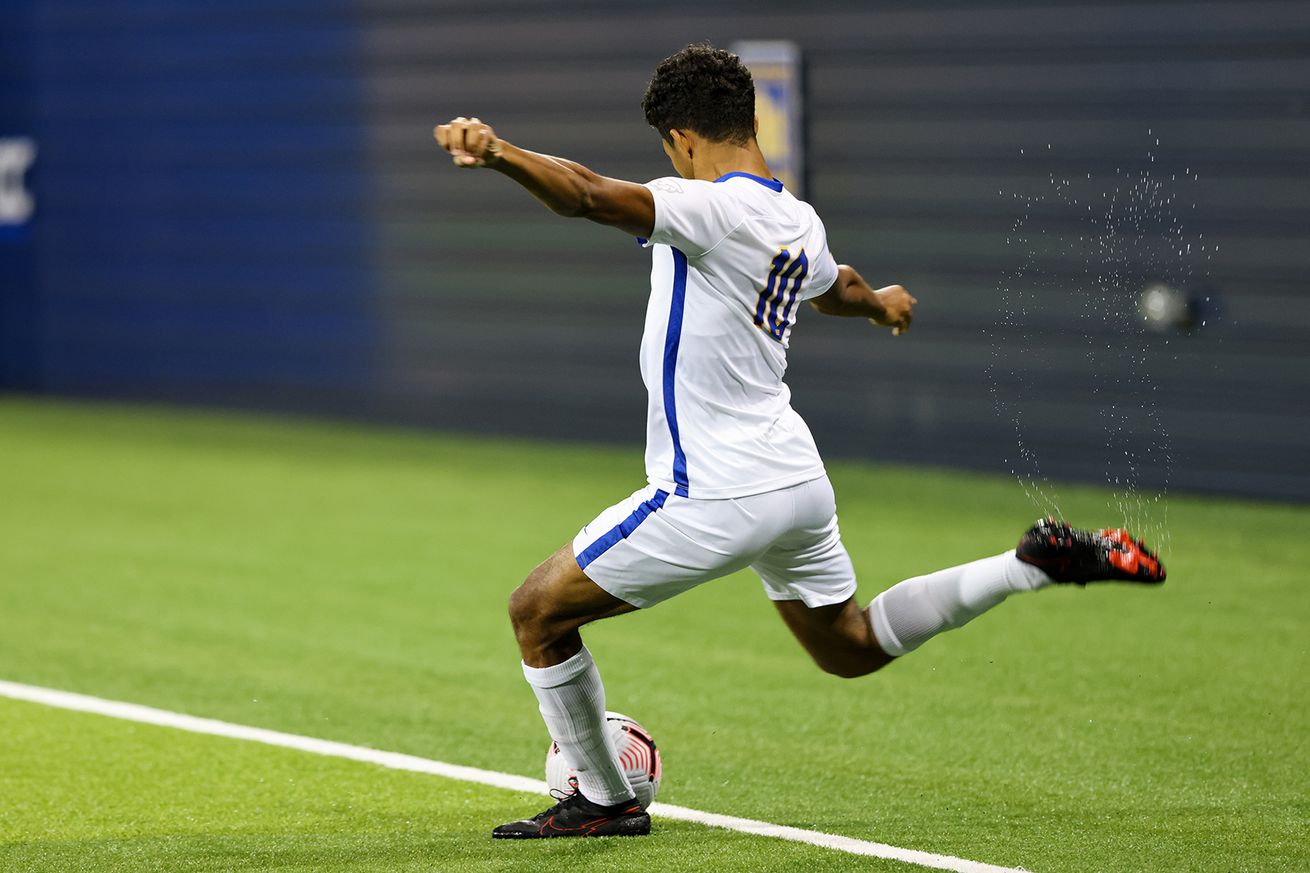 The No. 2 Pitt men’s soccer team traveled to SU Soccer Stadium to face Syracuse in a primetime ACC matchup on Tuesday night, and while the Orange fought the Panthers to the end, Pitt came away with its second win of the season and improved to 2-0-0.

Syracuse played the part of the aggressor early in the game, keeping Pitt on its heels and threatening on multiple occasions in the first half. As a result, Panthers goalkeeper Nico Campuzano was forced to come up with three saves in the first 45 minutes, including an impressive stop of a Deandre Kerr shot that he deflected with his right foot.

However, Syracuse’s early efforts would all come up short, and Pitt would strike first, as freshman star Bertin Jacquesson sent a cross into the box that found the outstretched foot of Veljko Petkovic as he slid toward the goal. The Serbian midfielder sent the ball careening into the back of the net to set the Panthers up with a 1-0 lead in the 39th minute, and Pitt would hold that advantage at halftime.

Cross from Jacquesson, back of the net for Petkovic ⚽

Pitt was the more aggressive team early in the second half, but Syracuse evened the scoreline in the 65th minute on a meek header by Hilli Goldhar, the same Orange forward who scored Syracuse’s lone goal in the 1-1 tie between the two teams in their last meeting in 2019.

In the 71st minute, Petkovic buried his second shot of the night to give Pitt a 2-1 lead. Celebrations were tempered by what appeared to be an injury to Petkovic’s knee, but he was up and moving again quickly, and before the Panthers could even entertain the thought of closing out the game with that scoreline intact, Noah Singelmann sent a shot past Campuzano to tie the game at 2-2 two minutes later.

From there, the second frame descended into chippy play, as neither team was willing to give an inch. The most notable of several incidents occurred in the 82nd minute, as Petkovic and Singelmann were both issued yellow cards after Petkovic wrapped up Singelmann for a takedown in the midst of a late tackle. But nothing was resolved 90 minutes in, and the two rivals headed into overtime tied at 2-2.

The physical play of the second half bled into the extra period and prompted a red card, as Syracuse’s Luther Archimede was sent off less than a minute into overtime after taking down Pitt defender Jasper Löeffelsend. The red card came after Archimede had two previous run-ins with Campuzano, one of which ended with a yellow card. It left Syracuse down a man, and that disadvantage would prove costly.

With the score still knotted at 2-2 100 minutes into the matchup, the two teams would play a second overtime period. However, this time, a decisive goal was in the offing, as Pitt defender Arturo Ordoñez fed the ball to Jacquesson, who sent a game-winning shot skittering to the left of the outstretched hand of Syracuse goalkeeper Christian Miesch.

The freshman scored the game-winner for @Pitt_MSOC in 2OT!! pic.twitter.com/8PuxIGzI3G

“It was a very good result on the road against a very difficult opponent in Syracuse,” Pitt head coach Jay Vidovich said after the game. “Happy we were able to come back once again, and it was a good result. Big team effort there at the end, as Luis [Lara] came in at the end to help us out as we were fatiguing late. But overall, great team win.”

The win was not only Pitt’s second of the year but Pitt’s second over Syracuse since the two teams joined the ACC in 2013. Of course, this time, the stakes were higher for the Panthers, as they had everything to lose as the second-ranked team in the nation, and on Tuesday, they would not allow the Orange to derail them.

With the win, Pitt maintains its perfect record and advances unscathed into its third matchup of the year, its home opener against Virginia Tech at Ambrose Urbanic Field. In Pittsburgh, the Panthers will face another untested team, as the Hokies, like the Orange, will face Pitt in their 2020 season opener. The last time the two teams played, Pitt defeated Virginia Tech — then the No. 22 team in the country — 3-1 in Pittsburgh. The matchup between the two teams will kick off from Ambrose Urbanic Field at 7 p.m. ET on Saturday.