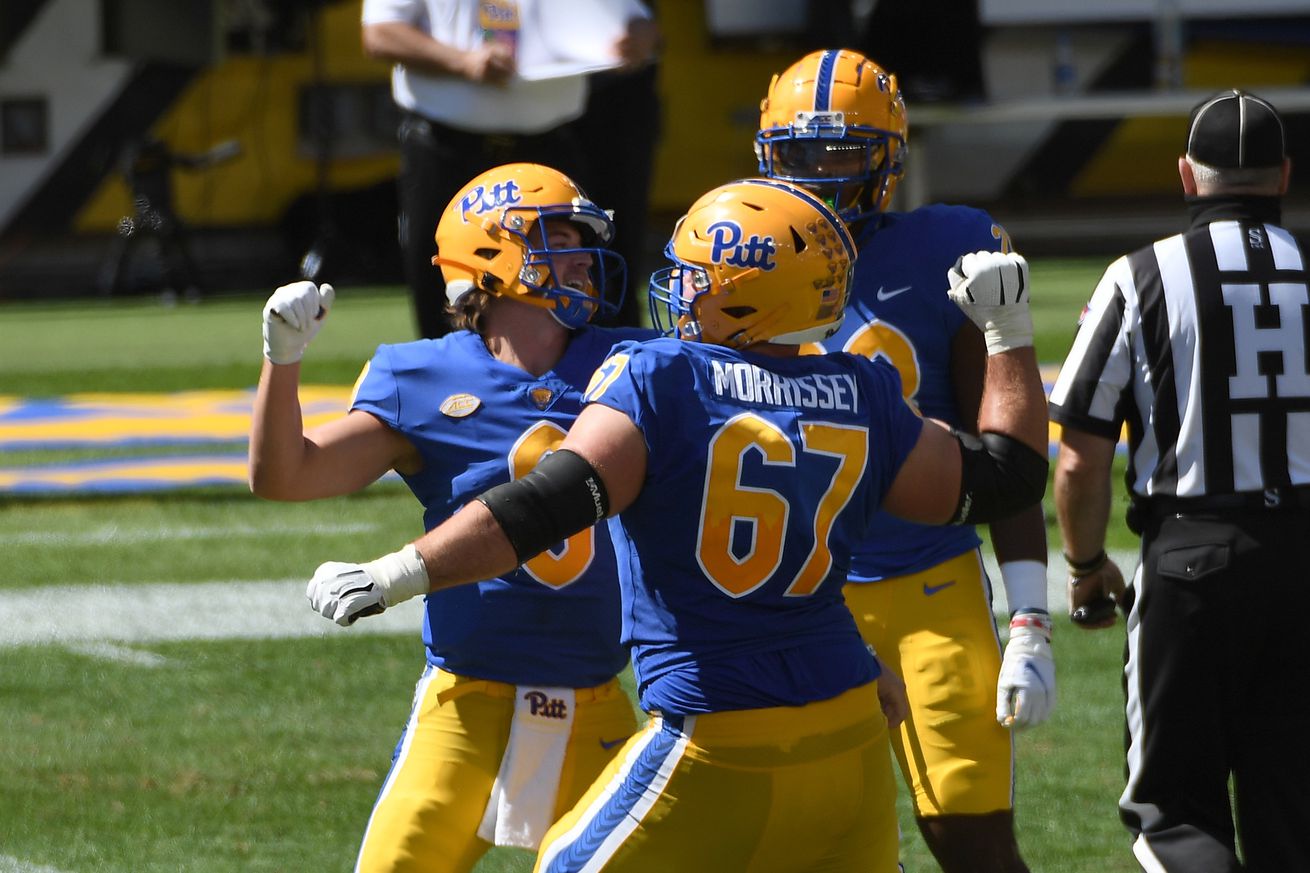 It wasn’t pretty (it’s astonishing how many times I find myself saying that) but Pitt’s football team defeated Syracuse on Saturday, 21-10.

Here’s the thing. Pitt was favored to win the game by about 20 points so many fans will look at the final score and insist that was too high. While the Panthers didn’t technically win by that many, they left nine points on the board due to missed field goals, had a gaggle of really dumb penalties, and gave Syracuse some great field position to play with.

Is Pitt three touchdowns better than Syracuse? Maybe, Maybe not. But this easily could have and, even with just the basic field goal conversions, should have been a 20-point win. Take that for what you will.

Nah, let me expound a bit on that, actually.

Syracuse’s defense did fine, I think. They forced some fumbles and recovered one on a lateral miscue. They got a bad interception out of Pitt quarterback Kenny Pickett. And they also, more importantly, kept the big play away from Pitt. The Panthers made plays but, honestly, I don’t think they looked that comfortable most of the time.

That Pitt didn’t have one long touchdown reception or run surprised me. I certainly didn’t expect another performance like they had against Austin Peay last week for obvious reasons but I did expect one or two guys to get loose for a big play. That mostly didn’t happen. There’s no doubt that Syracuse’s defense played fairly well.

That said, I don’t think they shut Pitt down to the degree that some will suggest. Pitt still scored 21 points and easily could have had 30 if not for the misses and the botched field goal attempt at the end of the first half. The Panthers also finished with 342 total yards — twice as many as what Syracuse had. The reality is that while the Orange defense was okay, it was the Pitt defense that really showed up.

Pitt’s defense held Syracuse to ten total points — all in the first half. Pitt, too, recovered a fumble and Paris Ford had his second interception in as many games. They held Syracuse to under 200 yards, including a meager 51 rushing yards and only 120 passing yards. And for crying out loud, I don’t even remember how many sacks they recorded. Syracuse was also only 2-14 on third down and failed to convert both of their fourth down attempts. Fair is fair here. Syracuse’s defense did an okay job but the Panthers’ defense was incredible. Aside from a busted coverage play again where Taj Harris got loose for another long touchdown grab, the Orange really did little else on offense.

That was even more impressive given that Syracuse squandered some really great field position. After pinning Pitt back, they started one early drive on the Panthers’ 35-yard line and were forced to punt. After the fumble recovery, they started on Pitt’s 14 and managed only a field goal. Then, their final drive of the game started inside of Pitt’s 40 and they went out on downs to basically end the game. To allow only three points under those circumstances was pretty special.

The Pitt offense did alright, I suppose. As stated, they didn’t get any of the big plays they had in the opener against Austin Peay. But they definitely made some plays — particularly when they needed to. Kenny Pickett was 25-36 for 215 yards, two touchdowns, and the pick. And as usual, he suffered from many drops by guys. Fun fact that I didn’t recall or had never even heard before — but Pitt led the nation last year in drops.

Still, the offense did enough today. Pitt has, at the moment, a pretty good group of mostly young receivers that are both getting open and making plays. A couple of times today, a great throw that was on target may have only been bested by just guys making great catches.

True freshman Jordan Addison continues to look like the primary target — seven catches today for 57 yards and a nice 27-yard touchdown catch. Jared Wayne played after missing last week and had five catches for 59 yards and a touchdown. On Pitt’s last touchdown drive, he had three catches including the score. And transfer D.J. Turner continues to pay dividends — five catches for 48 yards for him. And again, Pitt has made gains in the passing game without Taysir Mack, their leading returning receiver, who is apparently still banged up. Pickett didn’t go off today but he’s got some really solid weapons. That doesn’t even mention Shocky Jacques-Louis’ three grabs today and he also hauled in a long 68-yard catch against Austin Peay. Again, there are weapons here.

The running backs were pretty mediocre. They were much better than Syracuse’s backs, as expected. But the team averaged only 2.9 yards per carry and that was factoring in three carries for 24 yards and a gaudy 8.0 ypc average by wide receiver Jordan Addison, who had some sweeps. Even there, though, it’s worth pointing out that Pitt did not play freshman Israel Abanikanda for whatever reason. And Daniel Carter, who had two promising runs (15 yards on two carries) looked like he had to come and was banged up. The running game was certainly not at full strength — just as Syracuse’s is not with the late opt outs by their top two backs before the season started.

I couldn’t find any mention for Abanikanda’s absence yet so no idea if it was injury-related or not (he was dressed). But last week, he looked like arguably Pitt’s best back so not having him definitely hurt a bit. Four backs registered carries and, I just don’t see how that changes until someone really steps up. Vincent Davis got the start and the bulk of the carries with 18. But he had only 53 yards on the ground and hardly looked like a dominant No. 1 guy.

Alright, so two really big things to touch on here as I wrap up — both clear elephants in the room.

First, last week I wrote about how the team played such a clean game, avoided penalties, etc. Today was basically the opposite. There was a laundry list of things that went wrong and Pitt had seven penalties for 70 yards. Syracuse had their share of miscues, too (five penalties for 53 yards) but some of Pitt’s penalties — just really, really unnecessary and head coach Pat Narduzzi touched on them after the game in the brief on-field interview. Pitt’s got to clean that stuff up, no doubt about it. The frustrating thing, of course, is that we’ve been saying this about Narduzzi-led teams for some time now. His players constantly make some really poor on-field decisions. It’s just happened for so long that I don’t know that it ever gets better. I mean ever. It seems like we’ve been dealing with this stuff for a very long time.

The other, obviously, is the kicking game. I know the rush is going to be to, pun intended, boot starter Alex Kessman. He missed two today (a third try was unsuccessful due to a snap/hold issue) and missed his lone attempt in the opener against Austin Peay. But the reality is that most teams have very limited options. The team’s backups are both freshman and, at least in the first depth chart, were both listed as OR options with neither making a true claim to the backup job.

Also, remember this. Slow starts are not unfamiliar to Kessman. He started last year only 3-8 on field goals through the first four games before settling in. And in 2017 as a freshman, he only made two of his first five attempts. Kessman, I suspect, will be fine. The start is obviously troubling. But he’s turned it around before and, I’m guessing, he’s probably still the team’s best option. Time will tell but the good news is that the kicking hasn’t cost any Pitt games yet.

Today’s game could have and probably should have gone better. But at the end of the day, when you beat a conference foe by double digits, like Narduzzi said at the end, you take the win. (Mostly) no complaints here with the clear understanding that Pitt’s got to get better on special teams, has to clean up penalties, and still has to get better in the run game.