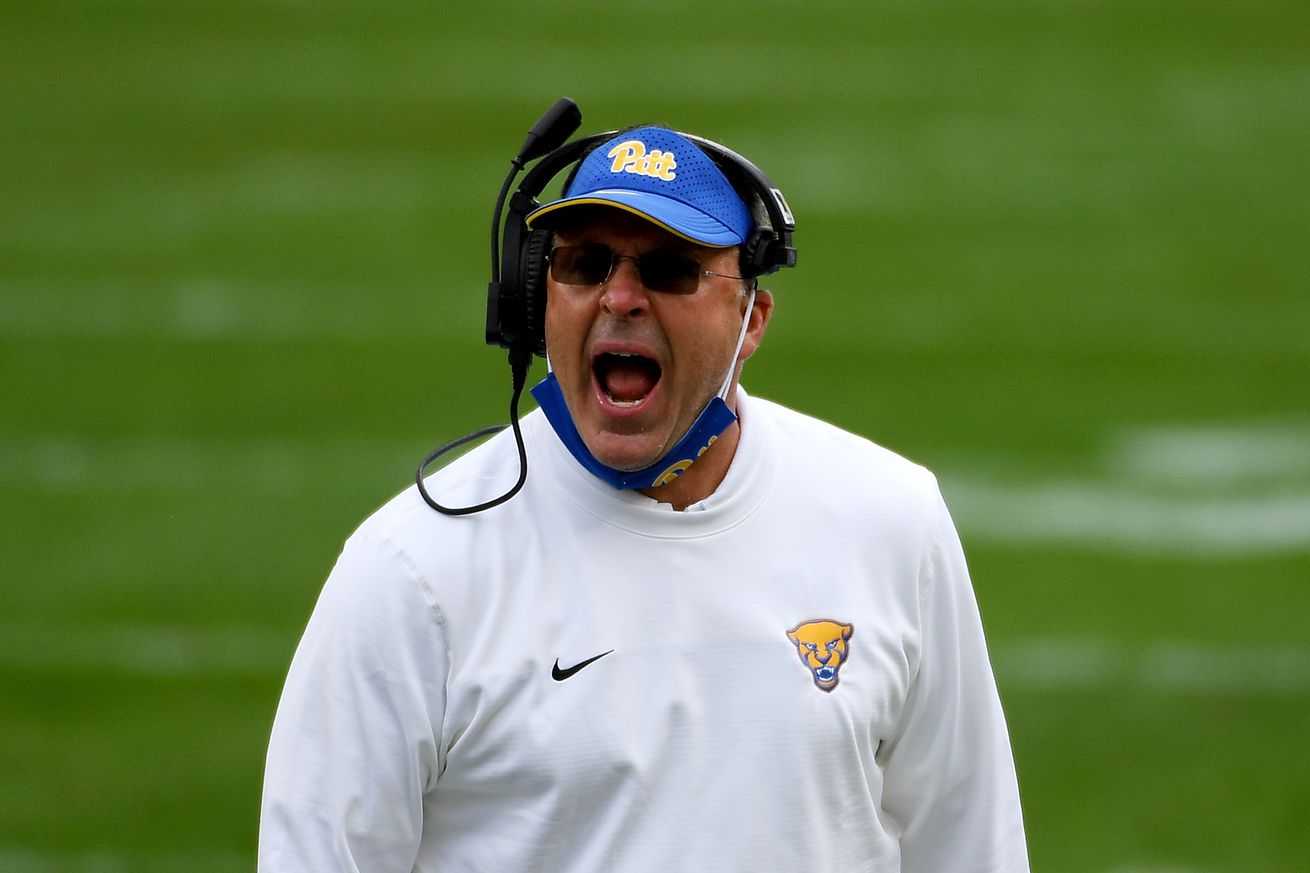 Sometimes you just throw your hands up and say, eh. I’m going that route.

The Pitt football team’s latest foray into disaster was a 31-30 loss to Boston College on Saturday. Anyone recapping this game could easily give you 2,000 words giving you the specifics. It was that back and forth. That — crazy. But, man, I’m not doing that. You can get a recap anywhere if you missed it. Instead, I’ve just got some thoughts that will take a while.

You could argue all kinds of things during this game. At times, Pitt looked like the better team. At others, they looked like they should be down by three scores. And at others, you just scratched your head and had no idea what to expect. I felt that third thought for basically the entire fourth quarter and overtime. I could have seen either team winning at that point and even though Pitt was trailing, they did not look out of it by any means.

By almost anyone’s estimation, Pitt did not play well. The defense settled down but had a terrible first half. The offense had real trouble moving the ball. And, the special teams was a decided mixed bag with some decent work in the return game by D.J. Turner and a school record 58-yard field goal coupled with two big missed field goals and a missed extra point.

The missed extra point is obviously the focal point here. And anyone that remembers Pitt-Cincinnati knows that you don’t take extra points for granted. And, well, it’s the reason the game didn’t continue to another overtime period. I’m a big Alex Kessman supporter but, man, I got nothing. He just blew that one, plain and simple, and it cost the team a chance to win.

That he blew the kick after kicking a 58-yarder (which probably would have been good from another 8-10 yards) will be the focal point of discussion. But why? Kickers are weird, man. Not even weird, just inconsistent as heck. They go through repetition after repetition of nothing but the same thing. Sometimes they just miss. Just like a player in the NBA misses a layup or a hockey player misses an open net. There’s no explanation for it and if you think I’m going to spend three paragraphs trying to come up with one, you’re wrong.

He just missed. That it came after the longest kick of his life is not that ironic.

That play will get all the talk but Pitt was plenty bad elsewhere, too. Five games into the season, we can safely say the Panthers cannot run the ball. Vincent Davis and Israel Ibanikanda had the bulk of the work and those two combined for 22 carries and only 57 yards.

Point blank, if you’re expecting the run game to get better, don’t. I have no doubt that the confidence of those guys is shaken by repeatedly getting stood up in the backfield right now and, while I could see them having a good game going forward, I think there will more bad games than good ones. We’re no longer in the evaluation phase — we’re nearly halfway into the season, folks.

I don’t blame only them, obviously. After all, we’ve seen Davis have more success last year and do I think he just forgot how to run? Nah. I think the line is probably struggling to create opportunities for him. There are times he could do more. On one play today, had he cut back sharply in the other direction, he would have had wide open field ahead of him. He’s missed some holes. But as I said, I have a hard time believing the same guy that made plays last year just forgot how to run all of a sudden. It doesn’t make any sense.

Passing game was okay but unspectacular. The thing that stuck out to me was that quarterback Kenny Pickett was throwing to heavily covered guys quite a bit today. I don’t know if that that was just an anomaly or just those being the best available throws he had. But he only completed a little more than 50% of his throws today and that’s uncharacteristic for him — he’s typically right around 60%.

Of course, some of that wasn’t his fault because my man was out there playing almost entirely on one leg late in the game. So, um, I’ve got some thoughts about that.

Pickett was clearly injured. Not banged up but physically injured. He was hobbling badly, could not throw the ball well, and point blank, aside from those runs, really not effective. So the question I’ve got is, are the backups really that bad?

Now, look, I don’t doubt they are. I’ve got not choice but to concede to the coaches here who, by the way are the only ones seeing these guys on a regular basis. But I suppose that they felt that keeping Pickett in there was the best option is alarming.

The backup job was so up in the air that there’s been no clear No. 2 guy. Frankly, I don’t know that Pitt has a defined backup between Davis Beville and transfer Joey Yellen even now. The latest depth chart, after all, still has Beville and Yellen essentially tied with the ‘OR’ designation. Simply put, neither has been good enough in practice to make them a clear No. 2.

But the reality is that Pickett was barely able to do anything out there after suffering what appeared to be an ankle injury. That neither of the backups could come in even under those circumstances is concerning. Literally, the staff is saying that even heavily compromised and with the potential for a more serious injury, Pickett was still the best guy for the job. That speaks to the gap between him and the backups and, yes, yikes.

The defense is, frankly, less impressive by the week. Now, look — these guys aren’t terrible. They’re still getting some pressure and wreaking havoc up front. Boston College had a harder time running than Pitt did, totaling only 30 yards. Linebacker SirVocea Dennis seemed to be everywhere today and he’s not even a starter on the depth chart. The team is full of talented defenders in the front seven. The Panthers got a bit strip fumble and, could have had two others if not for some questionable replays. But the Pitt secondary was again exposed as being, at best, quite ordinary.

Boston College’s Phil Jurkovec threw for 358 yards with three touchdowns and had a big day against a defense that was once considered possibly among the best in the nation. But the weak spot of this unit is in the passing game, despite two experienced safeties and an experienced corner. Few would argue that Jason Pinnock is the best corner the team has to offer but while he’s played well at times, he’s also really struggled, too. At the other end, there’s Marquis Williams who dropped an easy interception and then watched Pitt give up a touchdown on the same drive.

Better experts than I could more adequately describe the woes in the pass defense. But the tl;dr from my spot on the couch seems to be this. Pitt can try to bring the house and rattle quarterbacks that aren’t very good. That strategy, as it has at times, will work. But against better quarterbacks with more poise, they will be exposed. If the pass rush doesn’t get there, you will see plenty of breakdowns in the secondary.

I’m not just talking about guys getting beat, like Pinnock did on a filthy double move by a receiver today. I’m talking about guys literally having no idea where they should be. There was a play today where Pitt left a receiver wide open in the end zone due to miscommunication. Paris Ford threw his hands up in disgust even as the play was still being completed. We’ve seen that before and I can almost guarantee we’ll see more of that this year. The communication between what the corners and linebackers are supposed to do in conjunction with the safeties seems to break down a few times a game.

We’ve all been saying the Pitt defense is quite good. In reality, that statement should be amended to the Pitt pass rush is quite good. The secondary has plenty of issues.

Do I think this is a terrible team? Of course not. The reality is that Pitt is 3-2 and both of their losses have been by a single point. The Panthers are a couple of field goals away from being at the doorstep of the Top 10 in the rankings, for crying out loud. Instead, we’re all left talking about the season that could have been and many fans will already hit the eject button in terms of interest the rest of the year. There is no coming back from this and any meager hopes Pitt had of competing for the second spot in the ACC Championship game are dead, even if not officially. Reaching even .500 with this schedule will be a challenge.

That’s kind of a shame but it’s the nature of the beast. Keep this in mind.

Pitt has largely thrived in these sorts of games recently. Last year, they won three straight games by a field goal or less before winning another game in OT and winning their bowl game by four points. It’s the law of averages and Pitt was bound to start losing some of those close games just because no one wins them all.

The frustrating thing, of course, is that we thought Pitt was a clear favorite over the likes of NC State and Boston College. Close losses yet but they should have been wins, right? In reality, they are much closer to those teams than we thought. Pitt’s weaknesses in the secondary, running game, and special teams are showing — and that’s all you need to turn games from wins to losses. And, to the larger point, when you’re playing teams that are close enough in talent to you, you win some of these and lose some of them.

Right now, Pitt is losing them.