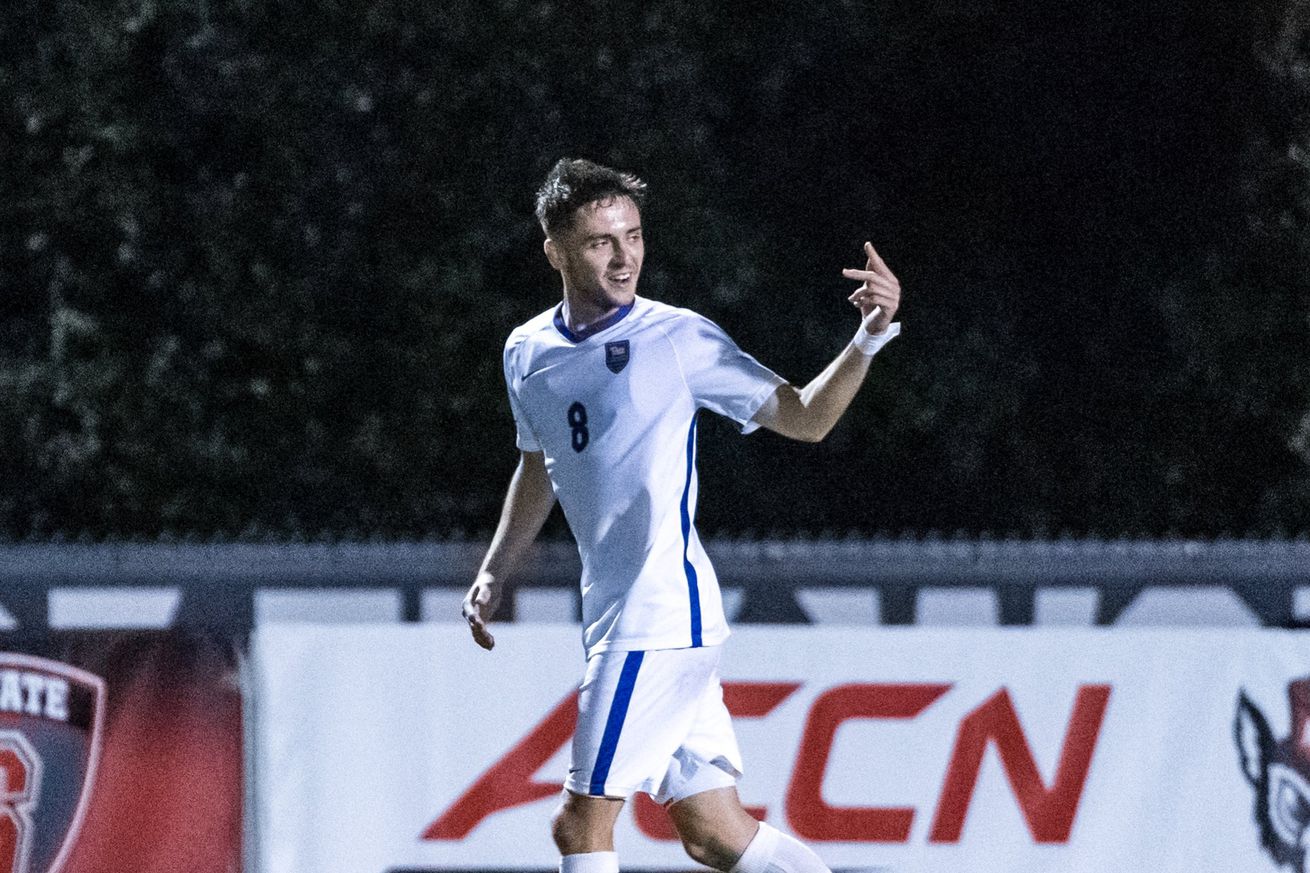 The top-ranked Pitt men’s soccer team faced Duke in a quarterfinal matchup in the ACC tournament on Sunday night, returning from a multi-week pause prompted by the team’s need to comply with COVID-19 protocols. However, the Panthers did not appear to suffer from rust and were able to deal the Blue Devils a 2-1 loss in their own metro area, as the “home game” was played in Raleigh, North Carolina, some 30 minutes from Duke’s campus in Durham.

The Panthers were the first to strike, as Pitt midfielder Valentin Noel found fellow Pitt midfielder Jackson Walti at the top of the box. Walti then wedged a shot into the gap between Duke midfielder Antino Lopez and Duke goalkeeper Will Pulisic that trickled just inside the right post to give Pitt a 1-0 lead in the 34th minute. The team would maintain that one-goal advantage for the remainder of the first half, but the Blue Devils would score an equalizer.

The first goal for the Panthers in the ACC Championship.

That equalizer would come 14 minutes into the second half, when Duke defender Stephen O’Connell managed to beat Pitt goalkeeper Nico Campuzano to tie the contest at one goal apiece in the 59th minute. However, the level scoreline would not last four minutes before the Panthers issued a response, and as it turned out, that response was decisive.

In the 62nd minute, Pitt midfielder Filip Mirkovic sent a long pass forward that found Pitt forward Alexander Dexter streaking into Duke’s box. Dexter then delivered a pass across the box, setting off a blue cascade of Duke defenders who slid in vain one after another to intercept the ball. The pass found the foot of Noel, who tapped the ball into the back of the net to give Pitt a 2-1 lead. The Panthers would then fend off the advances of the Blue Devils for the final 28 minutes and hold onto that advantage until the end.

Mirkovic finds Dexter who finds Noel for the score ⚽

Val is the first player in program history to score a goal in four consecutive contests.

“It was a tremendous game for us considering the situation, coming back and pulling out a win in a big-time game,” Pitt head coach Jay Vidovich said in an interview following the game. “I am proud of the effort our guys showed out there. … We found goals when we needed to, and it was overall a tremendous effort and a big step for the program.”

As the scoreline suggests, the game was hard-fought. Statistically, the Blue Devils got the better of the Panthers in a number of important ways. Specifically, they played a cleaner game in the eyes of the officials, drawing 12 fouls to the Panthers’ 15. Duke was also caught offside just once, while Pitt drew three such calls. And Duke got off three more shots and had one more corner kick than Pitt in the matchup.

However, Pitt played a more efficient game than Duke, as it put seven of its 12 shots on goal, while Duke put just three of 15 on target. The Panthers also showed more poise than the Blue Devils, as they drew just one yellow card compared to five for Duke, including two to Matthias Frick, who was shown a red card at the 90-minute mark. And one notable detail about the outcome was that Pitt managed that efficient game down two players who were ruled out due to COVID-19 protocols.

With that said, the players on the field for Pitt more than sufficed, and Noel, in particular, was outstanding, as he was in on both of Pitt’s goals and made program history with his 62nd-minute game-winner. With that shot, Noel became the first player in program history to score in four straight games, as he also scored against Virginia Tech, Virginia and Louisville.

With the win over Duke, Pitt advances to the semifinals of the ACC tournament, where the team will face Notre Dame. Pitt beat Notre Dame, then the fifth-ranked team in the nation, 3-1 on the road in its season opener on Sept. 26. The Panthers were scheduled to play the Fighting Irish in Pittsburgh on Oct. 30, but that game was canceled due to Pitt’s COVID-19 pause. The two teams will meet Wednesday at 8 p.m. ET in Raleigh with a trip to the ACC championship game on the line. And once again, the game will air on the ACC Network.