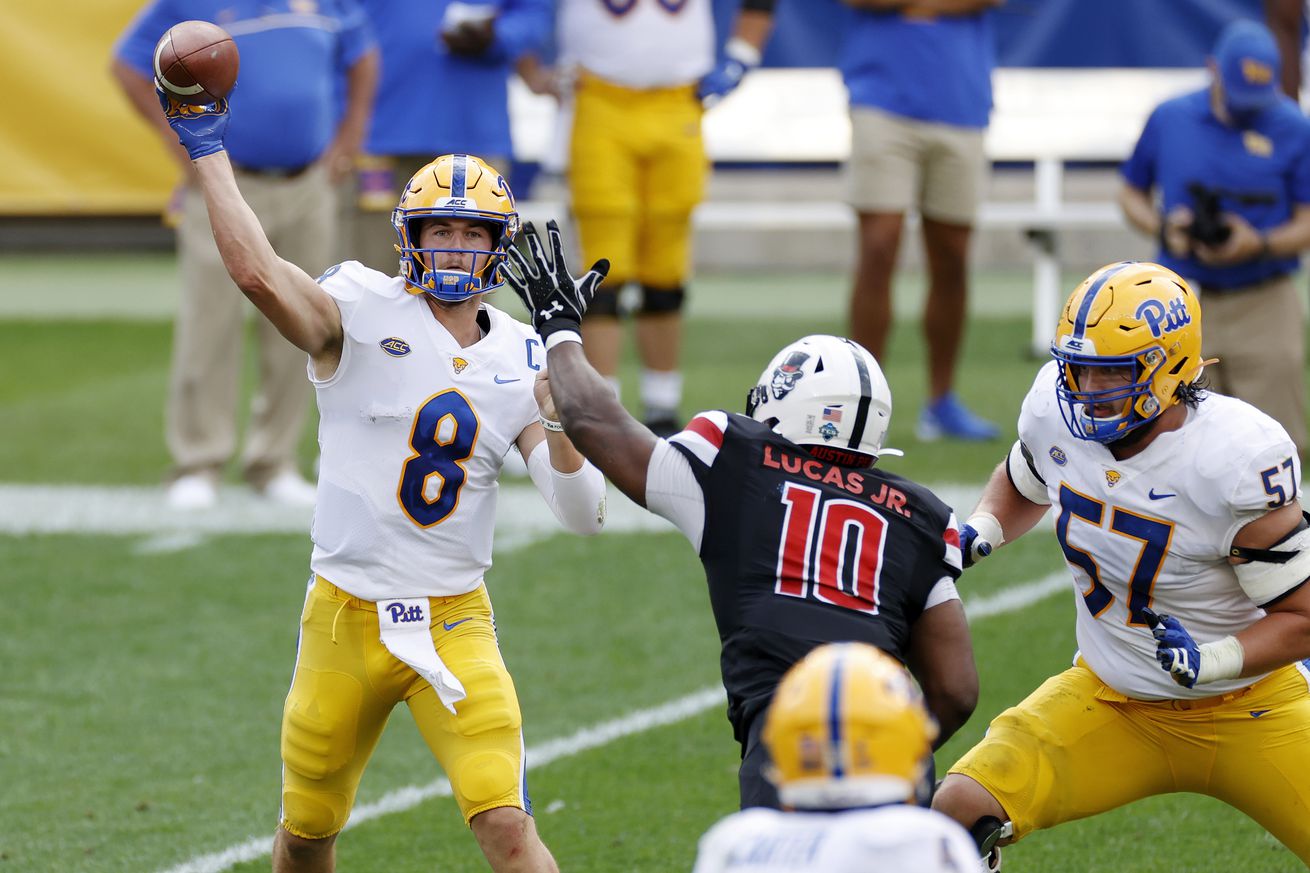 Earlier this week, I mentioned in the comments section of the preview post that Pitt should win this one against Austin Peay quite easily. That proved to be true as Pitt rolled to a stress-free 55-0 victory in the team’s opener on Saturday. Pitt scored touchdowns on their first six drives on their way to a 42-0 start. The Panthers didn’t punt until the third quarter when the backups were starting to get in.

How much did Pitt pile on in this one? Backup running back Todd Sibley got in on special teams, blocked a punt and returned it for a touchdown, and it was mostly an afterthought.

The Panthers just had very little competition today. The game was so out of hand that the teams agreed to play ten minute quarters in the second half. Frankly, I would have preferred to see more backups gain experience. True freshman Dayon Hayes, for example, was not listed on the two deep but got into the game and had a fourth quarter sack. Seeing more of him and others would have been nice. But with COVID especially, you just want to get in and out with as few issues as possible.

There was a point in the broadcast where an announcer mentioned that Pitt just looked very sharp for being in their first game this year. While Pitt did look great on both sides of the ball in the first half, I hadn’t given that specific thing much thought to that point. But he was 100% right. Pitt just looked very polished today (okay, other than guys on the field wearing the same jersey number a few times). There were some bad drops and a few minor issues but that was about as great a result as you could have hoped for. If I’m taking one thing away from this game, it’s just that Pitt was incredibly sharp.

Instinctively, we’ll be inclined to look at the competition. You expect Pitt to win these sorts of games this easily and let’s be clear — Austin Peay was a freaking disaster. But look at how Pitt struggled last year against Delaware. Or how other teams struggle week after week against lesser competition. No. 23 Iowa State went out and lost to Louisiana-Lafayette today. Nah, save that garbage — I’ll take the win without scrutinizing it under a microscope. Pitt looked that sharp and that focused today, and frankly, I’m not nitpicking anything today.

What was impressive? Shoot, what wasn’t?

Offensively, Pitt came out passing and went deep quite a bit and quarterback Kenny Pickett was surprisingly accurate. Pickett was 14-20 for 277 yards and a touchdown in only a half of playing time. True freshman Jordan Addison was his top target with seven catches, but Addison also had only 35 yards total and dropped a catchable deep ball.

Taysir Mack, arguably the No. 1 receiver was out, as was tight end transfer Lucas Krull. I assume those were injuries and not COVID-related issues since they were both at the game. But Pickett still managed quite well and got a lot of guys involved. 68-yard pass to Shocky Jacques-Louis, 68-yard pass to Jaylon Barden, long deep ball to Addison that was dropped, and a long pass to a wide open Kyi Wright who dropped it. Pickett was very, very good. None of that even mentions late transfer D.J. Turner, who had a touchdown and two catches for a team-high 76 yards.

Part of the reason they were able to do that is because the running game was just as good. No one stood out from the rest of the pack, really. But Pitt got over 100 yards and four touchdowns from A.J. Davis, Vincent Davis, Daniel Carter, and true freshman Israel Abanikanda. Vincent Davis got the bulk of the carries with 11 (for a team-high 43 yards and a pair of touchdowns) and Abanikanda was impressive with 5.2 yards per carry to lead the team. The offensive line seemed barely tested today.

I wrote earlier this week that A.J. Davis may have been the starter but that there was no telling if that would hold. And after today, we’ll see. Vincent Davis looked good with and Abanikanda looked good. A.J. looked fine, too. If nothing more, this is at least a three-headed monster with Carter and Sibley also capable of getting carries. I’m not sure anything was solved today at running back.

Also worth pointing out is that I’m not sure what to make of the backup quarterback job. Redshirt freshman Davis Beville was technically the first guy off the bench as he came in at the end of the first half as he got a few snaps to get Pitt in field goal range. But in the third quarter, the first guy getting a full drive, so to speak, was transfer Joey Yellen. The two then sort of rotated in and out so it’s hard to say that one is clearly above the other at this point. Their stats were minimal — Beville was 2/3 for 19 yards and Yellen was 3/5 for 13 yards.

I can’t evaluate these guys too much based on today but Yellen, in particular, didn’t look great. He fumbled a ball early (I think in his first drive). In a later drive in the third quarter, he threw a ball that could have been picked off. Then later, he had a fumbled snap later (though the center’s in on that, too, obviously). Pickett was outstanding so either of those guys threatening him isn’t even on the radar. But as I wrote earlier, with guys missing games due to COVID, backup jobs are more important than ever. I’m still tracking backup quarterbacks like the rest of you.

Defensively, Pitt looked just as good. Things started with a interception by Paris Ford on Austin Peay’s first drive and, even while missing some key guys, the Panthers really were pretty stout. Plenty of pressure and when you pitch a shutout against anyone, it’s notable.

I wasn’t quite sure how much pressure the defensive line would get. They’re down All-American Jaylen Twyman, who opted out of the season. Then they lost Rashad Weaver today, presumably to COVID testing. But the unit looked just fine and, again, a shutout is noteworthy, no matter the opponent. Plenty of pressure, two interceptions, zero points — nothing to add here.

It’s only one game and, yes, the opponent was overmatched. But it is hard to not like what you saw today. Great start to what is going to be a different type of season.