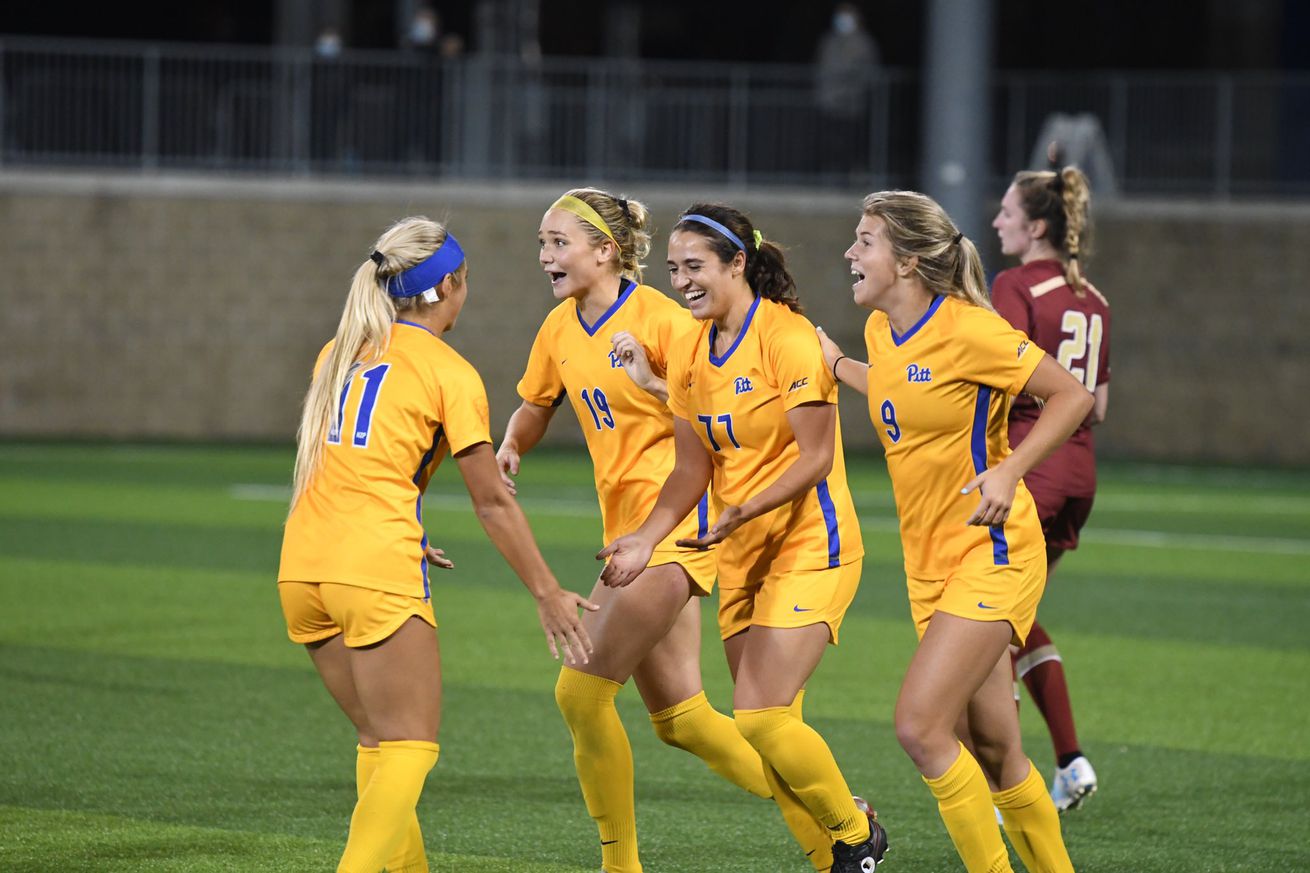 Amanda West came up with a brace, and Anna Rico scored the game-winner

The Pitt women’s soccer team hosted Boston College at Ambrose Urbanic Field on Thursday night looking to right the ship after two straight ACC losses in Virginia, and the Panthers would succeed, topping the visiting Eagles 4-3.

Pitt star Amanda West opened the scoring in the sixth minute after she was taken down by Boston College goalkeeper Allie Augur in the box. West was then awarded a penalty kick, which she buried in the bottom right of the net to give Pitt an early 1-0 advantage.

That advantage would be negated less than five minutes later, as Sam Smith of Boston College gathered a loose ball in the box, caught Pitt goalkeeper Katherine Robinson out of place and slid a shot past her to tie the game at one goal apiece. Mia Karras would then put the Eagles up 2-1 in the 17th minute, capitalizing on a corner kick, and Boston College would hold that lead at halftime.

In the second half, West was once again the first to strike, as she intercepted an errant clearance just outside the box, cut to her left to avoid a cluster of Eagles defenders and then chipped a shot over Augur’s head to score an equalizer in the 55th minute of the game.

What a move & shot by @amanda_westt!

Pitt would take a 3-2 lead on an Emily Yaple goal in the 61st minute, thanks to a well-placed assist by Kate McKay on a set piece. For a moment, it seemed the team could ride out the rest of the game and win by that score. But Boston College would strike again, as Jenna Bike snuck a shot past Robinson to tie the game at 3-3 in the 73rd minute.

Unwilling to let a productive night go down as a draw, Pitt mustered an answer 13 seconds later, as Anna Rico unleashed an absolute missile from several yards outside the box. The shot was perfectly placed, sailing beyond the reach of Augur and into the upper left of the net, and it would go down as the game-winner.

.@anna_rico8 with the shot for Panthers’ 4th goal!

“I wasn’t happy with the way the first half went; I thought defensively we were a little bit too lackadaisical,” Pitt head coach Randy Waldrum said during a postgame interview. “But one thing this team’s been really good about over the last two years is we’ve been very resilient. … I thought the team came out in the second half much better, much more organized, even though we still had to fight back to get on top. I was proud of the second-half effort and the way they responded.”

With the win, Pitt improves to 7-2-0 on the season and 2-2-0 in ACC play, and Boston College falls to 0-3-0 overall. The victory also places unranked Pitt ahead of No. 7 Duke in the ACC standings and ties Pitt with No. 6 Clemson for sixth place in the conference.

The team will look to build on Thursday night’s success with a rematch with Navy on Sunday. Pitt beat Navy 1-0 in Annapolis on Sept. 20 and the Midshipmen have been idle ever since. The second game between the two teams is set to kick off from Pittsburgh at 1:30 p.m. ET.