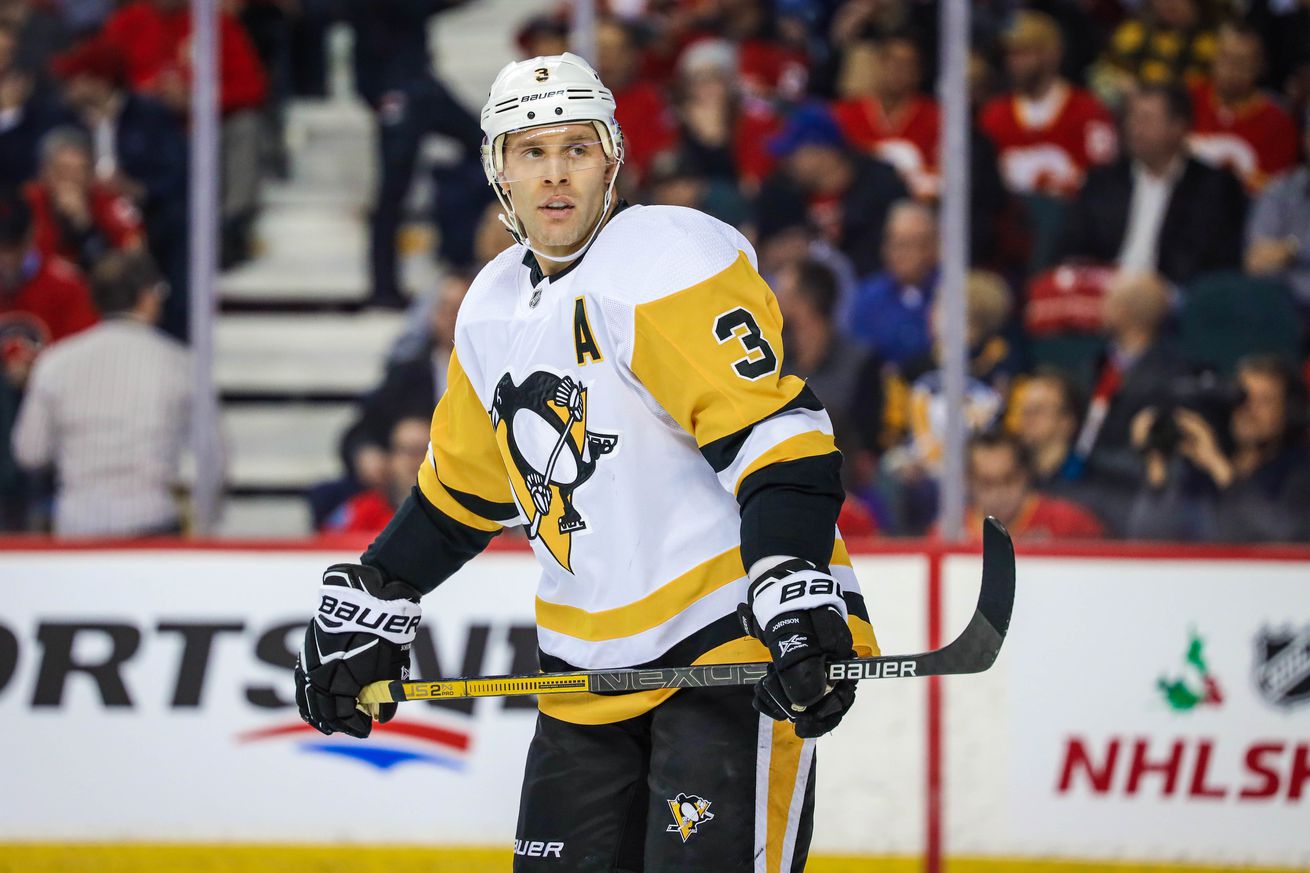 Last season was Jack Johnson’s first in the black-and-gold after he signed a 5-year deal with the Penguins on July 1, 2018.

A lot was made of the deal at the time (and still is). Pensburgh readers were not kind to Johnson in his inaugural season, with the defender earning a majority “F” grade in his 2018-19 season review.

Johnson has obtained a reputation in the advanced stats community of being a bad player who is a hindrance to his team in just about every situation. That reputation has not changed through year two with the Penguins.

—Once upon a time, Jack Johnson could put up some pretty decent offensive numbers as a defenseman. Now? Not so much, as he has aged his offensive contributions have dried up.

I’ve never looked too deeply at point totals by defensemen, and considering the style and role JJ plays, point production isn’t a concern of mine. Johnson did, however, lead the team in blocked shots with 97, and was second only to Brandon Tanev in hits with 183, so… hooray?

—There’s no way to sugarcoat it. If you know how to read advanced stats, you know a sub-50 FF% and CF% show a player who, more often than not, does not positively contribute to a team’s ability to possess the puck. And while many said Johnson “rebounded” in year two with the Penguins, and you can see tiny increases in these possession percentages, Johnson was still a negative player on the ice.

And look all the way on the right side of the row. Outside of the 2009-10 season, this was Johnson’s worst season in terms of team on-ice save percentage while playing 5v5 hockey.

For all the the talk Johnson improved in his second season as a Penguin, or at least “wasn’t as bad” as suggested by some in the media, unfortunately his 2019-20 was just about identically ugly as his 2018-19.

The only areas where Johnson isn’t among the very worst players in the entire league are the things outside of his control: on-ice shooting percentage (and it’s not like HE’S scoring or setting up many goals), quality of teammate and offensive zone start time. The Pens basically try to hide Johnson with offensive zone starts and quality teammates to minimize the damage that he can create. That doesn’t always work though, because Jack Johnson can’t be relied on to consistently perform basics of the position, which can turn into goals against very quickly even with favorable starts. For instance:

Offensive zone draw, drawn up to set Schultz up for the one timer on his off-side. That brought Johnson over to his off-side, forcing him to try to control and keep the puck in on his backhand. He couldn’t, and the Habs broke up ice quickly. 1-0 pic.twitter.com/cWyK2Ethby

In the four-game series against the Canadiens, Johnson recorded no points and was on the ice for five of the nine goals Montreal scored in the entire series, despite playing a defense-low 15:56 per game. That’s a lot of damage in a little amount of time, but it’s nothing new, Jack Johnson has never been on a team in his 14 year NHL career to win even one playoff round. He’s just a third pair defenseman, how much damage can he do? Well, a lot, as it turns out.

Hockey is a team game but also

Penguins 5v5 goals against with Jack Johnson on the ice:

Penguins 5v5 goals against with Jack Johnson not on the ice:

—Johnson’s regular season can be cleanly split in three nice and tidy pieces. There’s October+November where he was playing ~18 minutes a night in what probably was his best stretch of the season with John Marino. Marino is no miracle worker, however, in his 183 minute sample with JJ the Pens were a 48.6% Corsi For%, 46.9% Scoring Chances% team but got covered up with a .921 save%. Still, 5v5 goals were 7-7 with Johnson-Marino so the team found a way to at least tread water, a very rare occurrence.

—Then the second part of Johnson’s season started after Brian Dumoulin’s ankle injury on November 30th. Johnson, inexplicably, had his role shifted from third pair to first pair with Kris Letang for much of December, January and February (until Dumoulin’s return on March 3rd). Johnson played 21+ minutes in this stretch of the season, and it was an abject disaster. In the 36 game run from 12/1- 3/2, Johnson’s Corsi% cratered to 45.5%. He was on ice for 20 goals for to 32 against. His xGF% was 43.9% — and remember that’s primarily playing with the Pens’ best offensive players, and he still found a way to be on ice for almost nothing good offensively, with tons of bad events defensively.

The Pens are competing for a division title, trying to reintegrate Sidney Crosby, and build chemistry with Jason Zucker. And yet they are playing Jack Johnson on the top pairing with Kris Letang, a pairing which kills the top line. #LetsGoPens pic.twitter.com/NNeL096AkL

—The third part of the season was when Dumoulin returned, Johnson was immediately shifted back into the third pair and only played 14 minutes a game in March (to go along with the 16 in playoffs).

But really, it’s worth wondering what in the world Sullivan was thinking from December-March, watching Johnson struggle mightily, but make little adjustment, aside from even some experimentations with a Marino-Letang double right-handed top pair. Did he really fear increasing Marcus Pettersson’s competition or ice time that much?

Getting an offensive zone start 46.2% of the time and proceeding to kill your team’s ability to produce offense in that same zone is impressive, if it wasn’t so painful. Johnson’s 2.18 GF/60 ranked last among the team’s regular defensemen this season.

These “with and without” comparisons may be a bit too on the nose, but I’m only doing it to highlight how much of an impact Johnson can have on his teammates. Simply take Jack Johnson off the ice, and the Pens offense instantly switches from bad to good.

And these two charts highlight the defensive struggles of Johnson at 5v5. For someone who has earned the reputation of being a solid defenseman, opposing offenses are scoring almost at will with Johnson on the ice.

They always say data doesn’t lie. In this chart you can see literally every single player getting dragged down by the big suck that is Jack Johnson on the ice, as opposed to breaking free of the anchor and playing well when he’s not out there.

he’s not even a good penalty killer ffs.

did he drag down the offense a little less this year versus last year? Sure.

was he a little better defensively? also sure.

but being “better” for him is still very, very bad. pic.twitter.com/ga7IQR5oYv

Jack Johnson’s ability to kill penalties is over-rated and over-emphasized by the media and management as well. He’s certainly better at 4v5 than 5v5, but doesn’t draw nearly enough added bonus to justify his spot in the lineup. As in, Dumoulin and Pettersson or anyone else could replicate the results Johnson has gotten on the PK.

Good morning to everyone except Jack Johnson and his RAPM chart. pic.twitter.com/VHug06es1V

It’s tough to get the internet to agree, but anyone with a functioning brain (that won’t look bad to admit because he gave him a five year contract) would come to the conclusion that Jack Johnson is one of the worst players in the NHL.

Johnson has a negative market value. It’s only going to get worse as he ages, and it’s already really, really bad.

Another look at the Bruins’ first goal of the game. Jack Johnson making sure to give Patrice Bergeron all the space he needs. #Pens #DKPS pic.twitter.com/3JG0sObf4d

Jack Johnson helping out Pasta’s run for the Rocket pic.twitter.com/w7ZNYzoxxI

Run the clip back a little, and here’s Jack Johnson taking ZAR out of the play before pushing Kotkaniemi into the net. Incredible sequence. #Pens #DKPS pic.twitter.com/DXDfsTjEHh

An complete snipe from Jack Johnson ties the game at 3-3. pic.twitter.com/q1HY56Hk5u

Two years into his deal, and Jack Johnson has delivered on everything we thought we’d get from him: terrible possession metrics, the ability to make his defense partner worse, and a lot of blocks and hits and watching his team get scored on a lot. An awful lot.

I went into this season review never intending to make a “hit piece” on Johnson, because I see all the criticism he receives from the fan base. And, again, I’m sure he’s a swell guy off the ice. But I’m drawing conclusions from the “eye test” and what these standard and advanced metrics tell me. Simply put, you can pay a bottom-pairing defender much, much less than $3.25M to hit and block shots, and get some kind of tangible “doesn’t also kill the team while he’s on the ice” too.

A broadcasting professor I had in college often gave her students a countdown when the students were about to “go on the air” and the “pressure was on” for an assignment. Before they began, she’d always say: “3-2-1 don’t suck!”

Well, for Johnson, that’s basically where we’re at. We just have to hope he goes out there and doesn’t suck more often than not.

That has been the challenge, he drags down his partner and his forwards, no matter who he plays with. If Johnson remains on this roster, he must remain sheltered in the third defense pair to hide his limitations, which still ends up biting the team more often than not when he finds ways to be on the ice for a ton of goals against (see Montreal series).

The true ideal, would be to not give Jack Johnson the chance to tank another season, and gain an addition by removing him from the roster. Mike Sullivan erred mightily in continuing to play Johnson all season and playoffs, even when it was blatantly clear how much the team struggled with No 3 on the ice. The Pens would be much better off buying out or trading Jack Johnson. Or if he’s really such a great teammate maybe he can come up with an allergy to his pads or some other bogus way to help by staying away.

Will Johnson be playing for the Penguins by opening night 2020-21? Or will be traded to shed salary and allow other, possibly more important moves to be made as GMJR retools the roster?

Jim Rutherford seems more intent now than ever before to prove that Jack Johnson is a solid defenseman, and the deal he signed Johnson to was worth all the money. Every little quote or blurb surrounding Johnson since the Penguins were eliminated on August 7 has showcased Johnson in a very positive light. And I know as a GM you don’t outwardly say: “Well, Player X was terrible throughout the season and in this series” to protect whatever trade value he has, but I truly believe Rutherford thinks the criticism towards Johnson is bogus and he intends to keep Johnson around for 2020-21.

Will Rutherford continue to stick by a person he clearly likes? Does any of this matter?