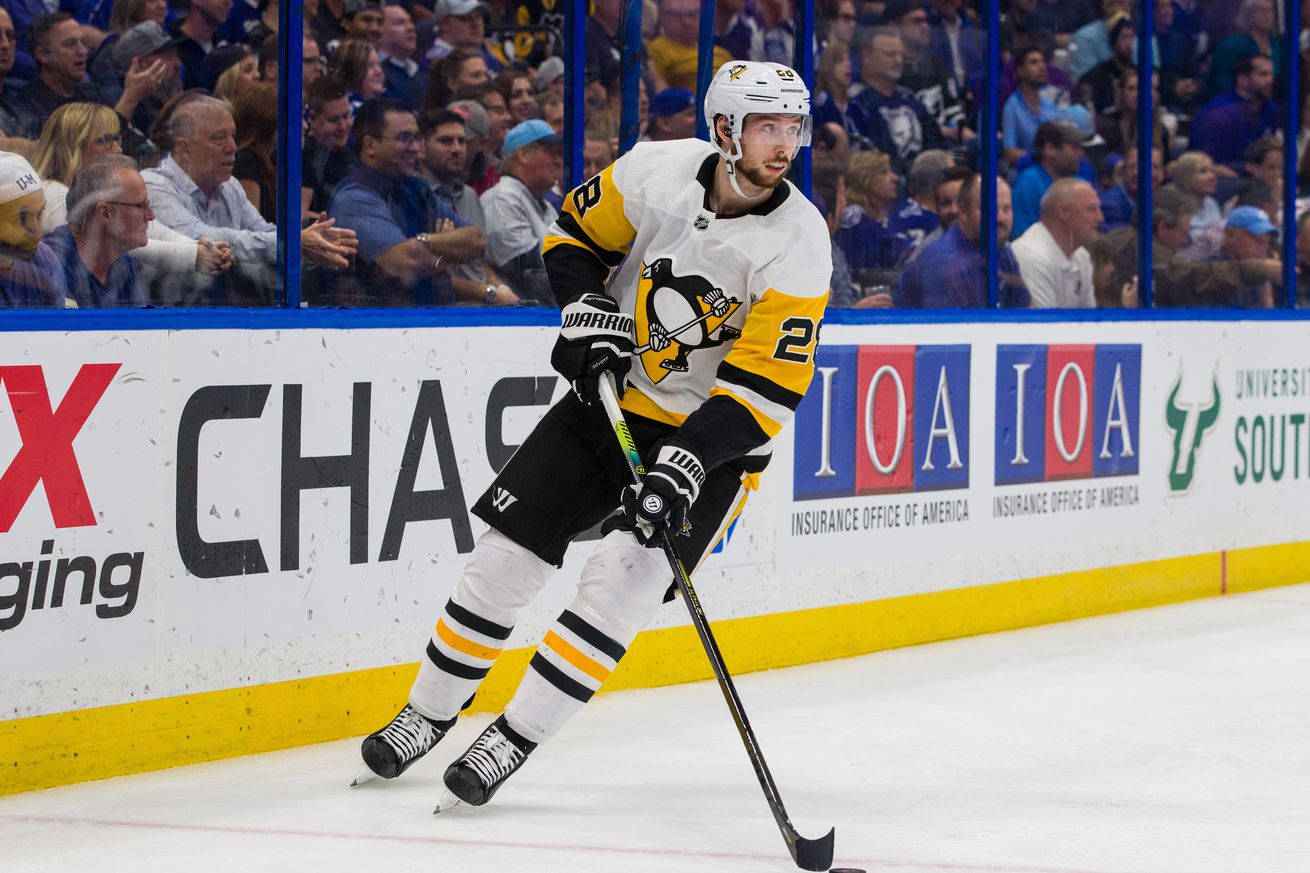 The Swedish defender wrapped up his first full season with Pittsburgh and was rewarded with a five year contract to remain in Pittsburgh for many more seasons.

Contract Status: Next season begins the first year of a five year deal (longest running contract for the Penguins) that extends through the 2024-25 season worth $4.03 million per season. Signed extension on January 28th, which is probably the best thing to happen to the Penguins in 2020.

Pettersson was traded to Pittsburgh last season for Daniel Sprong and what a fantastic trade that has been for the Penguins. That was evidence last year when 95% of voters gave Pettersson a B or better, with 30% giving him an A.

(Ranks are out of the 8 highest TOI defenseman this season at 5v5 with 300 minutes played, thanks to Natural Stat Trick)

Pettersson played the most games by any defender for the Penguins last season, but Kris Letang edged him out in total TOI by just over 11 minutes in eight less games. Even with a much larger sample size than every other defender besides Letang, Pettersson lands right in the middle of nearly every category.

Pettersson’s number’s across the board are definitely what you’d like to see for as big a role as he had last season. He did much more than stay afloat and had positive possession numbers in every category. And as you can see in the possession metrics chart above, he progressed in every category in his second year with the Penguins.

Pettersson definitely stapled himself to the blue line for the Penguins for many more years when he signed his deal, and still has room to grow.

As you can see, Pettersson seemed to have ups and downs in overall play and TOI. We can’t even blame it on Jack Johnson this year, as you’ll see below the two played very sparingly this season.

Pettersson played mostly with Justin Schultz in the beginning of the season and played well together in October before having arguably his worst month statistically in November for the Penguins. He teamed up with John Marino as a result of Schultz getting injured and rebounded with his best month of the season in December.

January was another down month with only one assist in 12 games and a -3 overall, but did average his highest TOI of any month. Once again his next month was the complete opposite as he had six assists in 13 games and a +6 while still averaging over 20 minutes per game. His six games in March weren’t looking that great despite scoring a goal, he averaged barely over 16 minutes in the five games, over two minutes less than any other month.

His season is the definition of up and down.

As mentioned above, he played the first twenty games with Justin Shultz and seemed to be picking up steam before Shultz went down resulting in Pettersson playing with Chad Ruhwedel and Zach Trotman for the next fifteen games.

Once December hit Mike Sullivan paired John Marino and Pettersson together and it worked in December but the two were trending the wrong direction before Schultz returned and the two were getting feasted upon at 5v5 before getting split up in favor of a Pettersson-Marino pair to finish the season into the playoffs.

The Penguins had much higher shot volume when Pettersson was on the ice, but most came from as far away as possible. But it’s always nice to see darker red right in front of the net in the 1,100 minutes Pettersson played than in the 2,200 without him. The Penguins xG/60 was also right on par with a slight bump versus the rest of the team without him, which is a good sign as well. Pettersson isn’t going to light up the scoreboard but he did put up a respectable 22 points in 69 games last season.

Pettersson makes a much bigger impact defensively, which again is what you want from the player who played eleven total minutes less than Letang last season. When Pettersson was on the ice, his entire area is the darkest blue which shows his impact. The darkest red also comes from just above the slot on his side of the ice, which is more of the forwards responsibility, but worth noting. Once again the xG/60 isn’t a drop-off when he’s not playing, but is actually a slight decrease which paints a pretty good all around picture for Pettersson’s body of work last season.

Pettersson isn’t relied upon heavily on the penalty kill, but is still relied upon nonetheless. The xG/60 does have a marginal increase, but the shot volume is much closer to the net when Pettersson was out there. Pettersson is likely never going to be first defenseman over the boards on the PK, but will definitely be called up throughout his career.

Pettersson gave the Penguins some much needed breathing room when he signed an inexpensive one year deal to bridge the gap before being made whole with the contract he signed in January. He played in every game for the Penguins last year (along with only Teddy Blueger) which is almost unheard of for a Penguins blueliner. He had his ups and downs without a doubt, but still finished net positive in the end. He’s never going to chip in a lot of goals but he’s no slouch when it comes to creating offense, either. He only turned 24 in May and is signed for five more years. Year two was definitely another good one for Pettersson with the Penguins. The Penguins should have a pretty solid next group of defenseman as he and John Marino should continue to grow defensively.

The ideal 2019-20 for Pettersson from last year was to see how much he can grow offensively when not attached to Jack Johnson. He barely saw the ice with Johnson yet still put up very similar numbers. An ideal 2020-21 would see him grow on the other end of the ice while not sacrificing defensive play. He’s still young enough to improve in some areas, but Marcus Pettersson seems to be a steady defender with room to grow. Ideally he builds off of a pretty good season this year.

At 24 years old now and listed at 6’3” but ‘only’ 177 pounds, the fewest among the current top eight for Pittsburgh, can Pettersson bulk up and replace Jack Johnson on the penalty kill? That’s one of the biggest upsides management sees in Johnson. Could Pettersson make it more difficult to validate Johnson’s tenure by outplaying him at his only ‘strength’?

Pettersson averaged 19:24 per game last season, four seconds less than Jack Johnson because of the amount of minutes Johnson logged killing penalties. If management gains even more trust in Pettersson and have him locked up for five more seasons, maybe that could be the nail in the coffin for Jack Johnson in Pittsburgh. We can still wish for miracles, right?