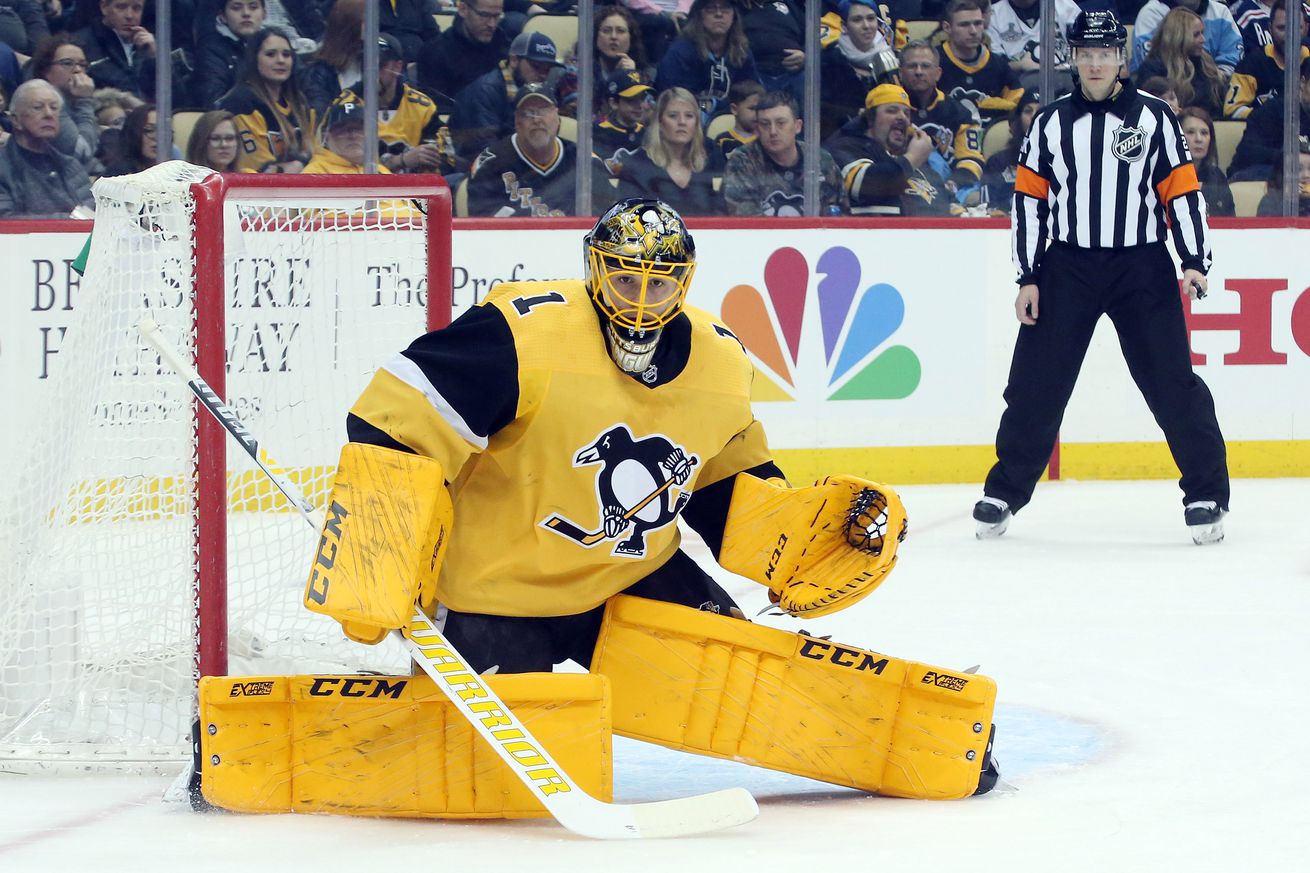 With the Vegas Golden Knights decision to keep Marc-Andre Fleury instead of trading him away for cap relief, it appears any reunion between Fleury and the Penguins has been put on ice, at least for the time being.

Although a Fleury return to Pittsburgh may have always been a long shot proposition despite what the rumor mill was saying, the decision by the Golden Knights to keep him in Las Vegas serves as the nail in the coffin. This means the Penguins will have to look somewhere else for their backup goaltender needs, with a solution likely already under contract.

Before delving into the obvious solution for the Penguins backup goaltender, let’s take a quick peek at the goalie free agent market. Just a warning, it’s bleak.

Note: Cory Schneider is expected to sign with the New York Islanders.

Looking over that list does not inspire much confidence in finding a capable backup to Tristan Jarry at a price that works for the Penguins. There are a few big names currently looking for a new home, but Pittsburgh doesn’t seem like a good fit.

With the goalie free agent market relatively barren, all common sense points to under contract Casey DeSmith serving as Jarry’s backup next season, and that is a reality Penguins fans should be more than comfortable with.

While most of the Penguins lineup was decimated by injuries last season, goaltenders Matt Murray and Tristan Jarry were healthy as a pair of oxen. This meant that Casey DeSmith spent the entirety of 2019-20 in the AHL with the Wilkes-Barre/Scranton Penguins after losing out on the backup job to Jarry in training camp.

All signs now point to DeSmith returning to the NHL in 2020-21 as the backup to Jarry now that Matt Murray has been traded to the Ottawa Senators. For the Penguins and DeSmith, this is the ideal scenario going into next season. For DeSmith, it provides him a return to the NHL, while it gives the Penguins a capable backup at a very reasonable price of $1.25 million against the salary cap.

During his last stint in the NHL during the 2018-19 season, DeSmith appeared in 32 games as the backup to Murray, posting a .917 save% and 2.75 GAA. Those numbers are slightly worse than what he posted in 2017-18, but with a much larger sample size. If DeSmith improves on those 2018-19 numbers even slightly, it will go a long way into solidifying the Penguins goaltending situation.

A few weeks ago, we discussed what a potential goaltender platoon between Jarry and DeSmith could look like. While it remains to be seen just how many games will make up the 2020-21 NHL season, having a veteran like DeSmith sitting behind Jarry provides a safety blanket should plans for Jarry go awyr or injuries occur.

Even though DeSmith has only 50 games of NHL experience under his belt, he’s been around the pro ranks long enough to serve as a more than capable backup to Jarry. His career numbers will not jump off the page to anyone, but the Penguins clearly seem comfortable with riding his as their No. 2 and he’s a well known commodity to the fan base to provide some measure of comfort with them as well.

While it’s always possible the Penguins could dip into the free agent goalie market, and you never know what Jim Rutherford has up his sleeve, all logic points to DeSmith being the perfect backup to Jarry for the 2020-21 season. Not only does he bring NHL experience and success with him, his contract is too good to pass up for a money crunching team like the Penguins.

All in all, going with DeSmith is the best decision for all parties involved in this situation and he should provide the Penguins with more than reliable goaltending when called upon.