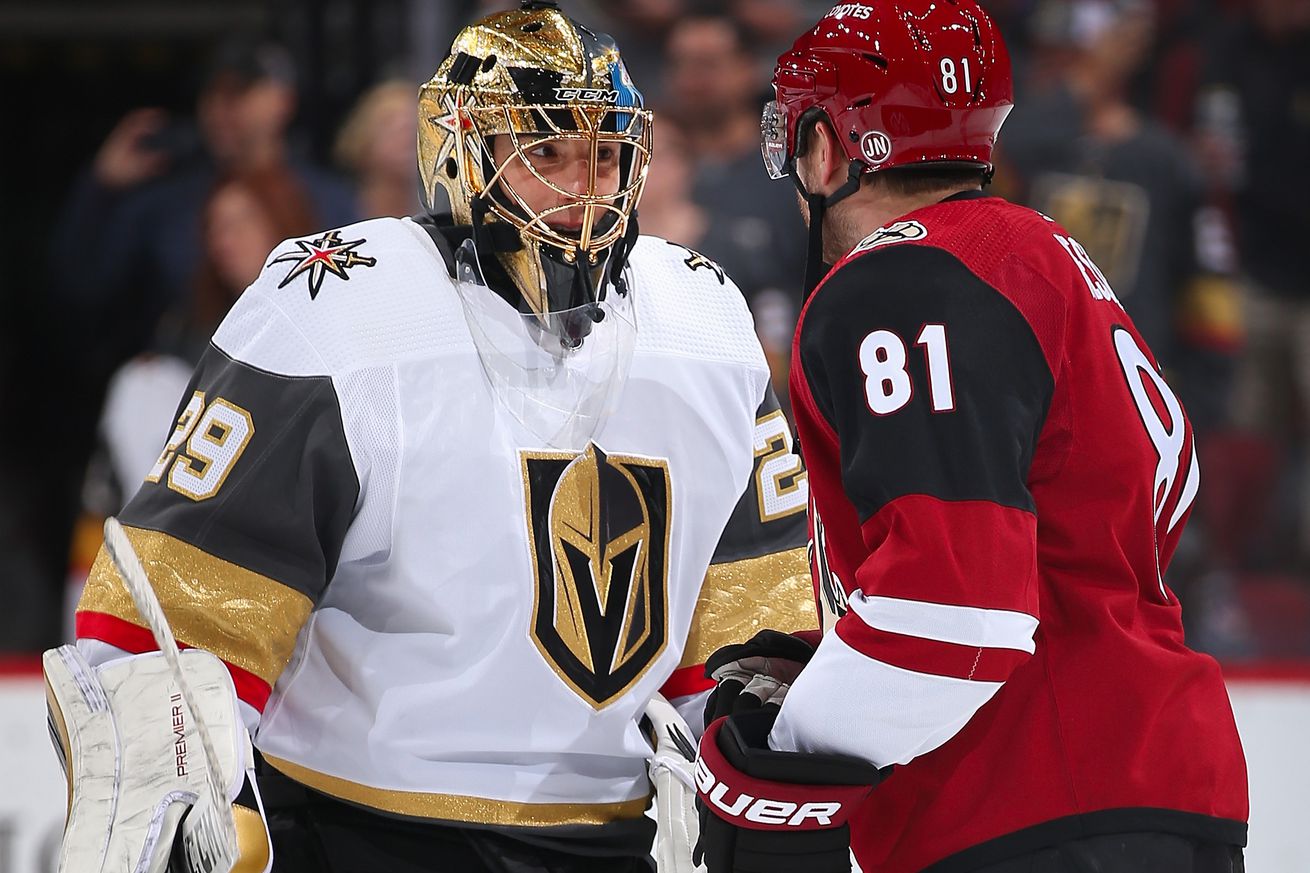 Looking at the division out in the far west

Part two of our series to recap the seasons and stories of former Penguins players who are plying their craft on different NHL teams this season.

13 out of 15 Western conference teams had a player with a connection to Pittsburgh, but these two were the lone teams not to. Seven teams in the East, or almost half the non-Pens portion conference have no ex-Penguins, which really is a function of trades now and players often getting shipped out West and not sticking in the division or conference when possible.

—Might as well start with the most popular active former Penguin. Fleury started the season off red hot, posting a .920 save% in his first 20 starts through early December, but cooled off mightily with just a .892 save% over the course of his last 28 starts, which led to Vegas bringing in a solid backup option in Robin Lehner at the deadline. MAF did well to notch five shutouts, but pretty much was about as league-average as always this year.

Fleury (36 in November) is under contract for the next two seasons at a starter’s salary of $7.0 million, so it figures he’s going to get a lot more starts for the foreseeable future. MAF is up to 466 career wins, good for 5th all-time in NHL history. With 24 more wins he will pass Ed Belfour and Roberto Luongo and level up to third all-time in wins. It would be a big jump up to Patrick Roy in second at 551 (and Martin Brodeur at 691 looks out of reach) but it’s worth pointing out that Fleury will be in rare air in the win column by the end of his career.

—Reaves only had three fights in 2019-20, he’s basically too tough for anyone remaining in the NHL to willingly want to fight (smart move by the rest of the league). Reaves has fit into Vegas better than he did in Pittsburgh (he’s scored 17 goals and 35 points in the last two seasons, after only scoring four goals and four assists in 58 games with the Pens), and might just be a player more suited for the Western Conference. At 33, he’s no spring chicken, but he’s beloved enough in Vegas for them to have extended him for the next two seasons at $1.75 million annually. The last of the dying breed won’t be leaving the NHL anytime soon.

—Now at age 38 after a recent birthday, it’s a surprise and nice feat for Engelland to still be active in the NHL. Just a tough, solid player that’s found a way to keep plugging away and stay reliable enough to stay employed. Not a knock, a heck of an accomplishment!

The end may be here, though. When Vegas made a coaching change on January 15th, Engelland was shuffled mostly to the side. He only dressed for five games under Peter DeBoer, and only one of them came in February (Feb 13th, his last appearance) and was a healthy scratch after that, and seemingly on the outs.

Still, for a guy who grinded his way through the minors, didn’t appear in the NHL until age 27 and was never more than a third pair guy, he’s got 671 career NHL games on the resume and 55 more playoff experiences. A tip o’ the cap for that.

—Neal started the season, and his Oiler career, on an unreal heater. He scored 11 goals in the first 14 games of the year. Was the former 40-goal scorer back? Well, no not really. He ended up with 19 goals, including just three goals in his last 18 games (and he scored a hat trick 12/31 vs NYR, so 17 out of the last 18 games he was held off the scoreboard). Still, a nice bounce-back for him after a dreadful season in Calgary last year where he tallied just seven goals in 63 games. Neal, 33 in September, still has three seasons left with a $5.75 million cap hit for Edmonton, which they’re surely counting down until it expires or they decide to buy him out.

—Sheahan signed a one-year deal with his former GM from Detroit, Ken Holland, up there now in Edmonton, and it went OK for him. He played about as he always does, adding some size up the middle and minimal scoring punch.

—Archibald’s 13 ES points this season ranked 6th among Oiler forwards (nice for him, but highlights the lack of depth and quality that they have). He was able to parlay that into a two year extension that starts next season for a $1.5 million annual salary, so he’s done well to break out and find a niche in the NHL, unlike some of his former Penguin prospect peers like Scott Wilson, J.S. Dea that have floated around more.

—Pens’ fans miss Dominik Kahun, but do they realize they also recently traded another young forward who scores almost twice as much? Pearson doesn’t play an appealing style to the eye, and partially due to playing through a broken hand he didn’t show out in Pittsburgh in his short stint in the ‘Burgh (9G+5A in 44 games in 2018-19) but but 27-year old has done well in other stops to score about 20 goals, north of 40 points and be a productive supporting option on a scoring line.

—Well, Brandon Sutter is still kickin’ around. He’s a third line center in Vancouver with his 14:51 TOI/game ranking 7th among regular forwards. He’s not scoring a ton and his advanced stats remain ugly. The now 31-year old has one more year remaining on his contract ($4.375 million cap hit) and it’ll be interesting to see what the next step of his career will be.

—Dreadful first season in the desert for Phil. Kessel’s on-ice 5v5 shooting%, which lived in the 8% range in his four years in Pittsburgh, took a big hit to 5.7% this season. Kessel’s personal 5v5 shooting percentage went from 10.4% last year with the Pens to 4.6% this year. His chance generation was still decent, but finishing was a major issue all season long. Another issue is defensive coverage was spotty at best again. Kessel’s numbers suggest they might moderately bounce-back next season, but his best individual days are surely behind him.

—Noesen provided a little bit of pop as a waiver pickup for San Jose, as they limped down the stretch with no real aspirations of contending this season.

—Rowney had a seemingly second productive season in a lower line role with the Ducks this year. But there was some smoke and mirrors involved, Rowney had just a 41.2 Corsi For% (second worst among forwards on the team) and benefited heavily from a .937 save% at 5v5 while on the ice. He is in a defensive role so he’s bound to allow chances against, but was pretty fortunate to have the results he did. Rowney is signed next season for a $1.13 million cap hit.

—Gudbranson famously had a strong (but small!) sample with the Pens, and the magic ran out this year. His xGF% was just 46.2% with Anaheim this year, it was 59.2% with Pittsburgh last year (joining 2013-14 with Florida as the only other of Gudbranson’s nine NHL seasons to have a 50% xGF%). Anaheim had to lean on him though, mostly due to some injuries, and still played him 20:02 per game, which is probably a bit too high.

—A waiver claim, Agozzino got a few more days with an NHL paycheck by sticking around with the Ducks. Didn’t do too much, though.

..And no longer, Daniel Sprong

—The mercurial Sprong bombed out of Anaheim, cleared waivers without being claimed, and then pouted his way through AHL San Diego, scoring just 27 points 11G+16A in 39 games. That’s far worse production for him at age-22 in the AHL than he was able to do at age-20 in Wilkes-Barre (65 points [32G+33A] in 65 games).

Finally having enough, The Ducks cut bait and traded Sprong to Washington, making for NHL organization No. 3 for young Mr. Sprong. This might be a last chance, and his attitude has appeared to adjust accordingly being as he scored six points (1G+5A) in six games with AHL Hershey in the games leading up to the shutdown and left a good enough impression there