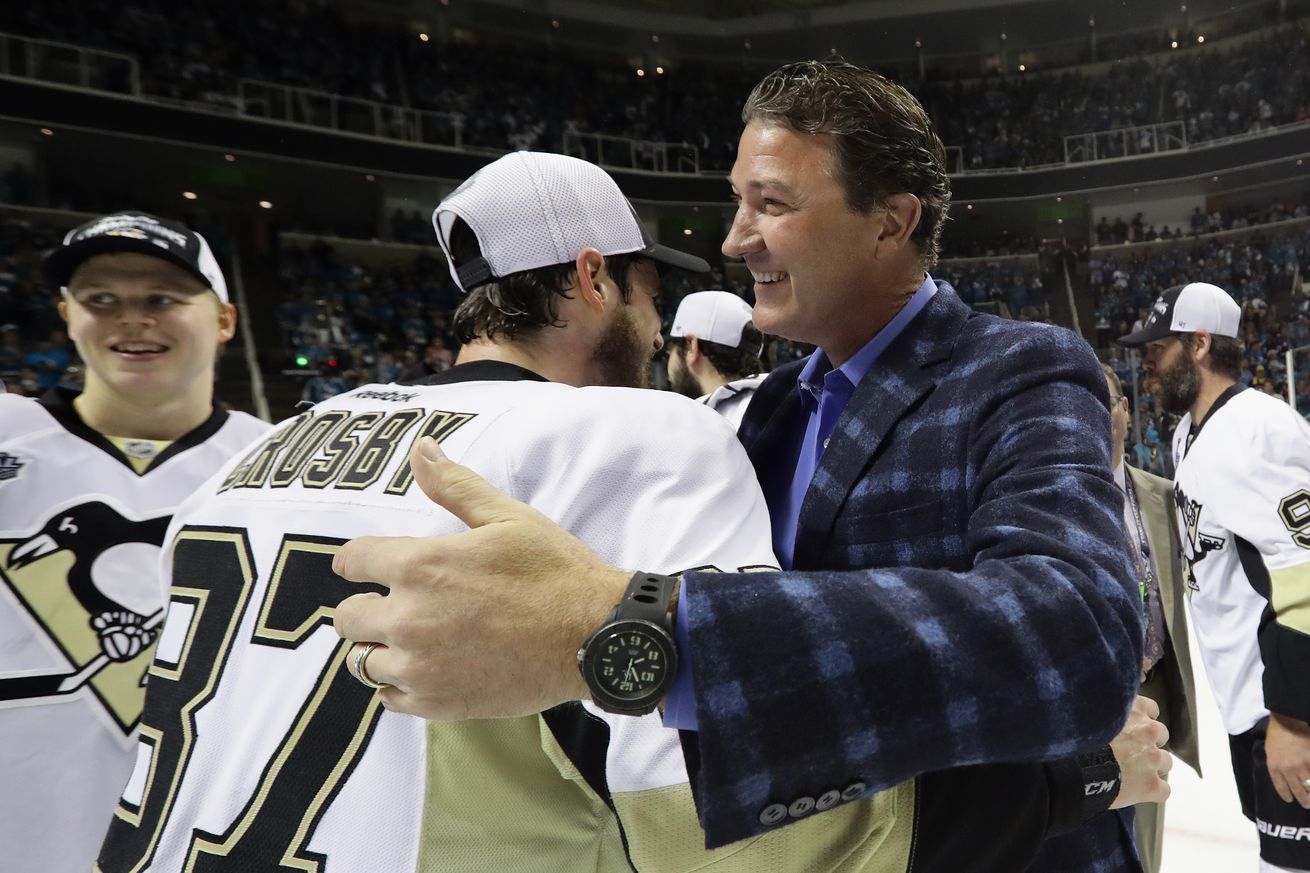 Well now, here we are. The finals of our pandemic-driven exercise to determine who the best team in Pittsburgh Penguins franchise history.

Now, this is very subjective and individualistic decision. It boils down to: can teams from the past hold up to the improved training, speed, size, diet, rest, lifestyle goaltending, and coaching systematic advantages of the modern time?

Well, that’s up to your creative license and how much you’re willing to take some artistic liberty. In a perfect world for the spirit of this exercise, this would be a styles matchup in a very idealistic world. Sure, the modern edges are tough to ignore, but perhaps it’s only fair to just “level the playing field” and imagine the hypothetical world where these teams meet on an even sheet of ice.

After all, 1992 vs. 2016 might have some real differences like wooden sticks versus synthetic weapons but deep down it’s still hockey only separated by 24 years, not what should be a full human lifetime or anything. It’s not like we’re using black and white footage and stories from our grandfathers to imagine players of yore or anything.

So with that out of the way, ladies and gentlemen, your main event!

Path to the championship in this bracket:

The best Mario Lemieux-driven Pens’ team has easily rolled over all competition so far, and for good reason. The mighty 1991-92 squad made mincemeat of their opponents back in the day, to repeat winning 11 straight. Even the cowardly Adam Graves’ slash of Lemieux’s hand in the playoffs couldn’t derail the Pens, and in fact did just the opposite and made the playoff performance of the team even better. Emotionally led by an absolutely dominant and forceful Kevin Stevens (who scored 54 goals and 123 points in the regular season followed by 13G+15A in 21 playoff games), the franchise got it’s first back-to-back taste of Stanley Cup glory. Oh yeah, and Lemieux shrugged off said broken hand to record 34 points (16G+18A) in just 15 playoff games. He also recorded five GWG’s, for an astonishing 1⁄3 ratio of games played/game winning goals in the playoffs.

Ron Francis and Jaromir Jagr were both comfortably above a point/game in the playoffs to provide depth scoring and enable the club to roll almost seemingly effortlessly over everyone who stood in their way as the Pens rallied off 11 straight wins to end the playoffs, including three straight wins over the Rangers, followed by a 4-0 sweep of the Bruins in the Eastern Conference Finals, followed up by a 4-0 sweep on Chicago in the Stanley Cup Finals. In those last 11 games, against the top competition they could find, they scored a whopping 47 goals (4.2 per game) and scored five or more goals in 7/11 of the games.

If they had to play another 11 games that spring, they probably would have won every single one of them too. This team was just an absolute machine in that moment.

Path to the championship in this bracket:

Mike Sullivan’s first Pens’ team has bulled their way to the title game too, with perhaps unmatched speed and determination that caught the NHL by storm. These Pens were also an incredibly deep team that was fueled by absolute star performances by Sidney Crosby, Evgeni Malkin, Kris Letang and Phil Kessel. The depth was there too with Nick Bonino taking a star turn, as well as Carl Hagelin producing like never before (or since) with 43 combined regular season+playoff points in 61 total games since coming over via a mid-season trade to complete the resplendent HBK line that ate up opponent’s lower lines.

This memorable group stuck to an aggressive system, benefited from Matt Murray’s icy calm demeanor and got on a roll as well taking out the Washington Capitals in six games (a team that beat the Pens by 16 points in the regular season standings), before outlasting the Tampa Bay Lighnting in seven games and then fending off the San Jose Sharks in six to capture a very satisfying Stanley Cup for themselves.

Tale of the tape

With credit to hockey-reference for these stats, here’s how the two mighty Pens teams stack up against one another in raw stats. (Click to enlarge if necessary):

It is comparing different eras, as the older Pens’ teams scored more and allowed more goals. Both teams had somewhat slow starts — the ‘92 Pens emotionally affected by a Cup hangover and the heavy blow of losing their leader the season before in Badger Bob Johnson. The latter ‘16 Pens were stymied by Mike Johnston to start the season.

The “SRS” and “SOS” stats above represent some hockey-reference metrics. SRS is “a team rating that takes into account average goal differential and strength of schedule”. SOS is a rating of strength of schedule. 0 is the even point for both. So both are strong, with a slight historical edge to the ‘91-92 Pens in SRS, which is interesting since the 2015-16 squad won more games.

But the more modern-day team benefited with 4 shootout wins that would have been ties for the older club after overtime, so a more true representation of wins would be 44-39 in favor of the ‘16 Pens (who also had two more games in their regular season).

—Beyond elite forward power. Lemieux, Stevens, Jagr and Francis were off-the-charts great in this era. Rick Tocchet also scored 49 combined regular season+playoff points in just 33 games as a Penguin this season coming over in a mid-season trade, he was an absolute force himself.

—Best player on the ice. Mario Lemieux’s ability to completely take over games deserves its own bullet point. He would be the best player out there, no matter how you slice it. That has to count for a lot.

—”Too strong” aura. The high school I went to in Virginia won like 50+ divisional football games back in the day. There was one lone banner hanging from the press box that read TOO STRONG. Simple, bold and completely accurate. Great teams that know they’re great just have that aura of invincibility. They’ve won before, and no matter what they’re facing, they just already know they’re going to find away to win again based on their skill advantage, but also simply knowing they were great and had that extra gear that no one can match. The 1991-92 Pens were really the epitome of this mentality. This special, tough-to-capture intangible feeling just builds and inspires confidence in an already stacked team of alpha males that were champions the year before, and proved it again with authority.

—Depth. Trotting out three lines- one with Crosby, one with Malkin, one with Kessel (and mostly having the support to feed them) is such a weapon, especially in a salary cap world where talent has been more evenly dispersed. The fourth line having hungry players like Tom Kuhnhackl (who was solid that run!) and Bryan Rust to go with wily veteran Matt Cullen (who had enough to score a total season+playoff of 20 goals and 38 points in a lower line role) requires mention too. The ‘16 Pens forward group were fast, skilled and came in waves with no let up.

—Goaltending. It’s really tough to judge past goalies versus how they are now, given how completely different equipment, technique and quality of athlete in the net has evolved over the years. Regardless, Murray was splendid in the spring with 15 playoff wins. Marc-Andre Fleury at a .920 regular season save% had one of his stronger seasons before he lost his job. No matter how you slice it, the ‘16 Pens have a much deeper and better tandem in net, and a better starter.

—Coaching. It’s impossible and would be foolish to say a team has the coaching edge when Scotty Bowman is on the other bench, but the ‘16 team clicked so well with Mike Sullivan’s strategies and decision making that fed into their strengths so well. Isolating just on the ‘16 team, especially after having an ill-fitting coach to start the season, once Sullivan took over the team absolutely took off and that’s no coincidence. The steady hand of coaching for this squad worked beautifully for them.

And now, the vote

These are the two best and most decorated teams in the Pens’ illustrious franchise history. Both are deservedly among the strongest and best groups of talent ever assembled. Both are champions. So, really, I don’t think there’s a loser here or a wrong choice. In fact, I’ve probably changed my mind a few times wondering which one to select. Either would be worthy to win, and it’s very difficult to imagine one coming up short. But, such is life, there must be a winner and now it’s your time to weigh in.

For fun, let’s pretend it’s a seven game series. Regardless of which team came out on top, it’s a hypothetical matchup that would be astoundingly fun hockey to watch.