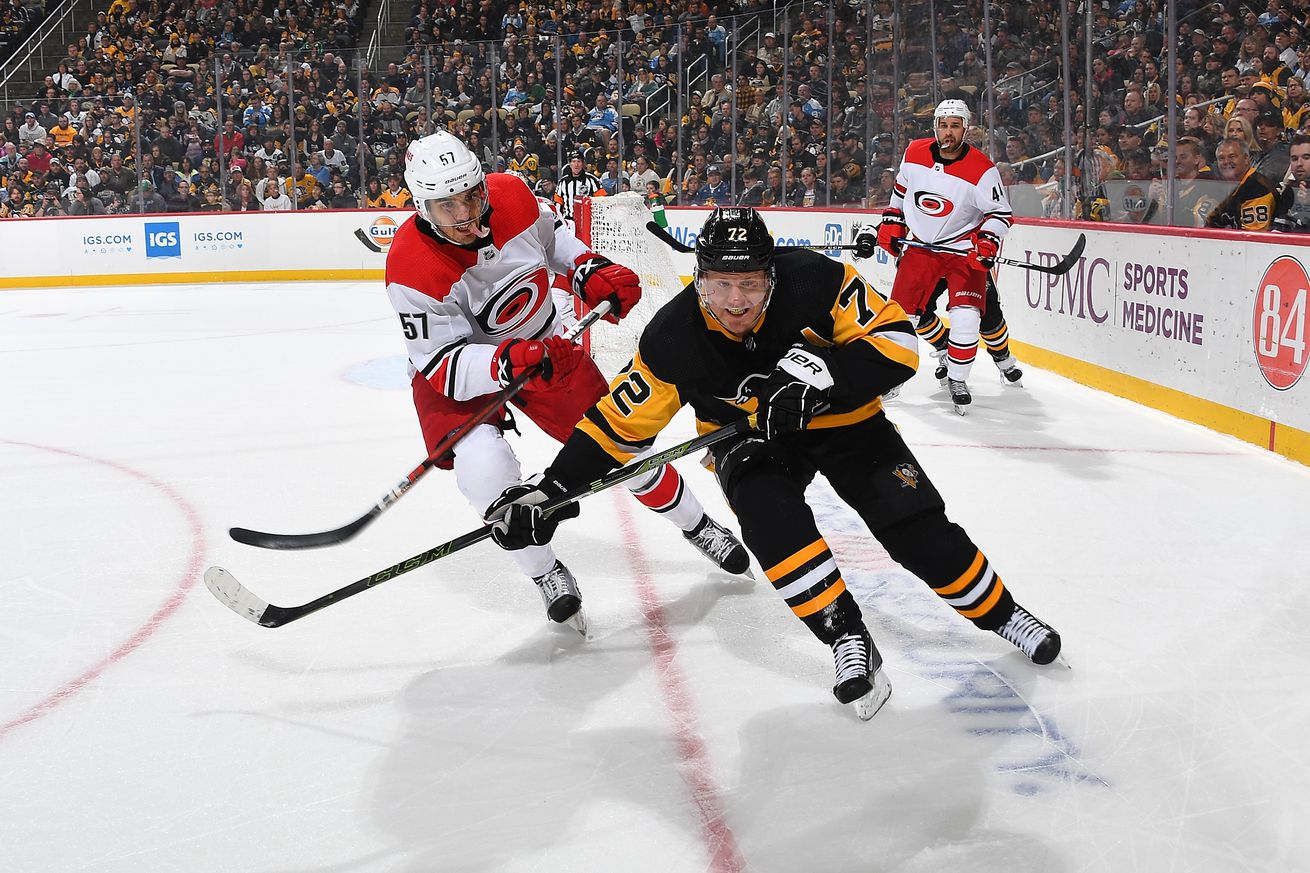 Finally, the Canes and Pens meet for the first time this season

Pens path ahead: The Pens will hit the road next week traveling to Jersey on Tuesday followed by a game @Columbus on Thursday and then they’ll see these Canes in Raleigh next Saturday night.

Season Series: 68 games in and it’s the first PIT/CAR matchup of the season. Which means lots of games coming up — as mentioned Pittsburgh is @CAR on Sat 3/14. The Hurricanes come back to Pittsburgh on Tuesday March 24th and then the Pens go back to NC for an afternoon game on Saturday 3/28 to complete the season series. Yep, after not seeing each other for the first 5 months of the season, they play four times in less than three weeks. NHL scheduling, everybody!

SBN Team Counterpart: Our friends at Canes Country will have you covered from the Carolina perspective

—Poor goaltending (or goaltending unable to overcome defensive mistakes) could be a culprit that sinks the Caps’ season. Rookie Ilya Samsonov started out the year very Tristan Jarry-like with a .927 save% up through the All-Star break (16 starts). But since then he’s not had much success, falling off with a .873 save% in six games since the break.

—Washington in general has been playing pretty poorly as of late in a very wide-open style. And they haven’t been able to outscore their issues as much as in the past. An understandable midseason funk or a troubling sign of things to come? Their cushion in the division has vanished with Philly and the Pens hot on their heels.

Player Stats at a Glance

—All of the top line is nearing a point per game, including Sebastian Aho making a star turn this year as a first line center with 37 goals on the campaign so far. That’s already a career high over his 30 goals in 82 games last season.

—Martin Necas has really emerged too. The 12th overall pick in 2017 only had 8 NHL games coming into the season, this year he’s made a big leap into a scoring role and the 21-year old putting up 16 goals and 35 points projects really well moving into the future as a quality piece of the lineup. Andrei Svechknikov, No. 2 overall pick in 2018, is a step even further with 60 points in 66 games – a huge leap over putting up 37 points in 82 games as a rookie last year.

—Remember when Nino Niederreiter was like the biggest trade steal of all time? He’s fallen back to earth with just 10 goals in 65 games this season, after starting really hot last year with 30 points in 36 games with the Canes after coming over from Minnesota.

—Serious injuries to Dougie Hamilton and Brett Pesce have really hurt Carolina, as to be expected from two very good players.

Possible Lines (based on Saturday game)

—The Canes recalled Geekie after the game, so perhaps they have an injury at the forwards that will force changes to their lines from yesterday.

—Trocheck scored his first goal in a Carolina jersey yesterday, and it was a big one being as it came in overtime.

—A perfect exhibit of weaponizing salary cap space was how Carolina acquired Skjei from NYR last month. The Hurricanes picked up a 2020 first round pick in exchange for Toronto to dump the salary cap hit of Patrick Marleau. Carolina then bought Marleau out. They used that first round pick to grab a 25-year old top-four defenseman. Pretty wily!

—The two goalie injuries loom large right now for a team clawing on the outside of the playoff bubble. Of all the trades the Canes made, they didn’t address the net which feels like a big missed opportunity considering that neither Mrazek nor Reimer have been performing at playoff caliber levels.

And now for the Pens..

Potential Lines (based on Saturday game)

—After three straight games of Matt Murray, it only makes sense to move to Jarry on the back half of the back-to-back. And even more considering Murray surrendered five goals in a loss. It will be interesting to see who is in net from here on out, especially if Jarry makes it tough today for coach Mike Sullivan to go back to Murray on Tuesday.

—The Pens were so bad yesterday, but it looks really tough for them to reinvent the wheel on short notice. They pretty much only have the guys who have brought them to the table so far, unless they’re willing to make major changes on defense…Which, with this coaching staff, remains to be seen.