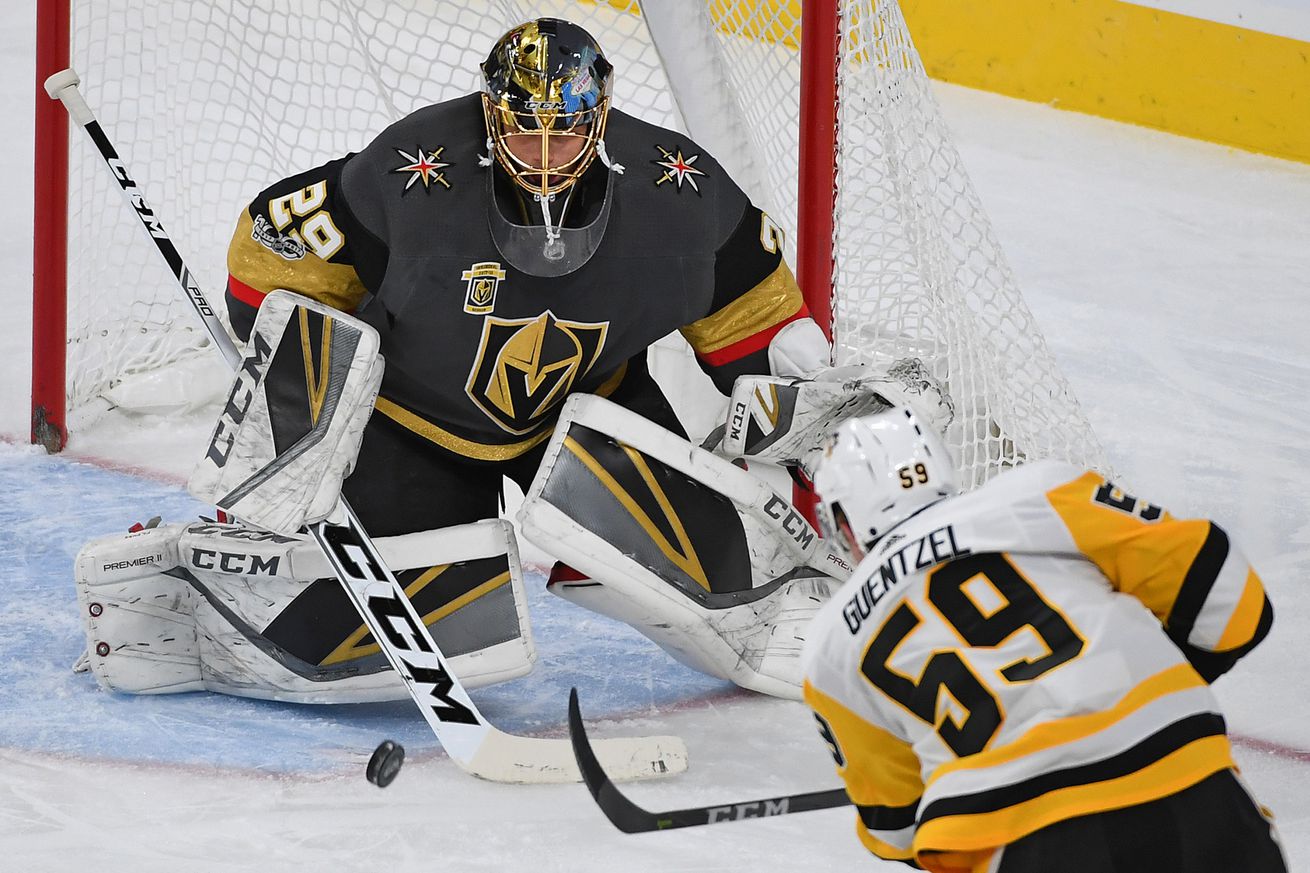 Depending on how desperate Vegas is to move him, there is a way bringing Marc-Andre Fleury back could work for the Penguins.

Over the weekend, the Vegas Golden Knights signed goaltender Robin Lehner to a new five-year contract after his impressive performance since joining the team at the trade deadline. With the deal, Lehner immediately becomes the Golden Knight’s No. 1 in net and likely spells the end for Marc-Andre Fleury in Las Vegas.

This news shouldn’t come as a surprise to those who was following the goings on in Vegas since the NHL restart and throughout their time in the Stanley Cup playoffs. During their run to the Western Conference Finals, Lehner cemented himself as the starter over Fleury and the added drama from Fleury’s agent on social media likely only drove the nail further into the coffin.

Given the upcoming salary cap crunch for many teams, the Golden Knights know they cannot possibly pay both Lehner and Fleury next season so their top priority now becomes finding a trade partner for Fleury.

Moving Fleury is not an easy task given his age and contract along with his step back in performance last season. There will surely be suitors around the league who are interested in acquiring Fleury, but the cost for Vegas may be steep if they hope to get a trade done.

The Golden Knights have reportedly offered a second-round pick for a team to take just half of Fleury’s salary, but teams, including the Hurricanes, are asking for a first and a second. Moving Fleury is the top priority right now https://t.co/gkHBIMGpHD

There are two major pieces of information in the tweet above that could influence whether or not brining Fleury back to Pittsburgh is a worthwhile endeavor. For one, Vegas retaining half of Fleury’s salary ($3.5 million) makes that contract much more tolerable to soak in should they swing a deal.

Secondly, gaining additional assets from the Golden Knights, especially futures, to take Fleury off their hands is not something to scoff at. Fleury may be past his prime, but he should still provide capable backup work behind Tristan Jarry. Getting those services at half the price along with a few other kickbacks could make a reunion worth trying.

In Emerson’s tweet, he mentioned the Carolina Hurricanes asking for a first AND second round pick from Vegas to acquire Fleury. In this year’s draft, Vegas first round pick comes at No. 29, and as you may have seen, they went ahead used that pick themselves meaning it is no longer in play.

Any first round pick Vegas sends away must be either next season or further down the road. The Golden Knights do have a pair second round picks in this year’s draft, but unless a deal is struck before that round begins is unlikely any acquired futures could be for this season.

Talk of a potential Penguins/Fleury reunion surfaced a few weeks ago in Elliotte Friedman’s ‘31 Thoughts’ but any solid rumors of a deal happening never materialized. Even right now, the Penguins don’t seem to be a player in any Fleury sweepstakes, but crazier things have happened and this piece is mostly laying out a best case scenario that needs to play out for the Penguins to bring him back.

Knowing that Tristan Jarry is likely the starter heading into next season, is it fair to saddle him with the extra pressure of knowing one of the most beloved players in franchise history is waiting in the wings?

Even if Jarry is fine with the added pressure, is Fleury worth the extra $2.25 million against the salary cap over presumptive backup Casey DeSmith? Even if Fleury provides a slight upgrade in a backup role, I’m not sure it’s enough of an upgrade to justify the added cost.

It’s hard to say at the moment whether or not a reunion with Fleury is even a good idea for the Penguins to explore, but if an offer like mentioned above is presented from the other side, it may be something that Jim Rutherford simply can’t brush aside, especially if he has plans on building the Penguins for the future.