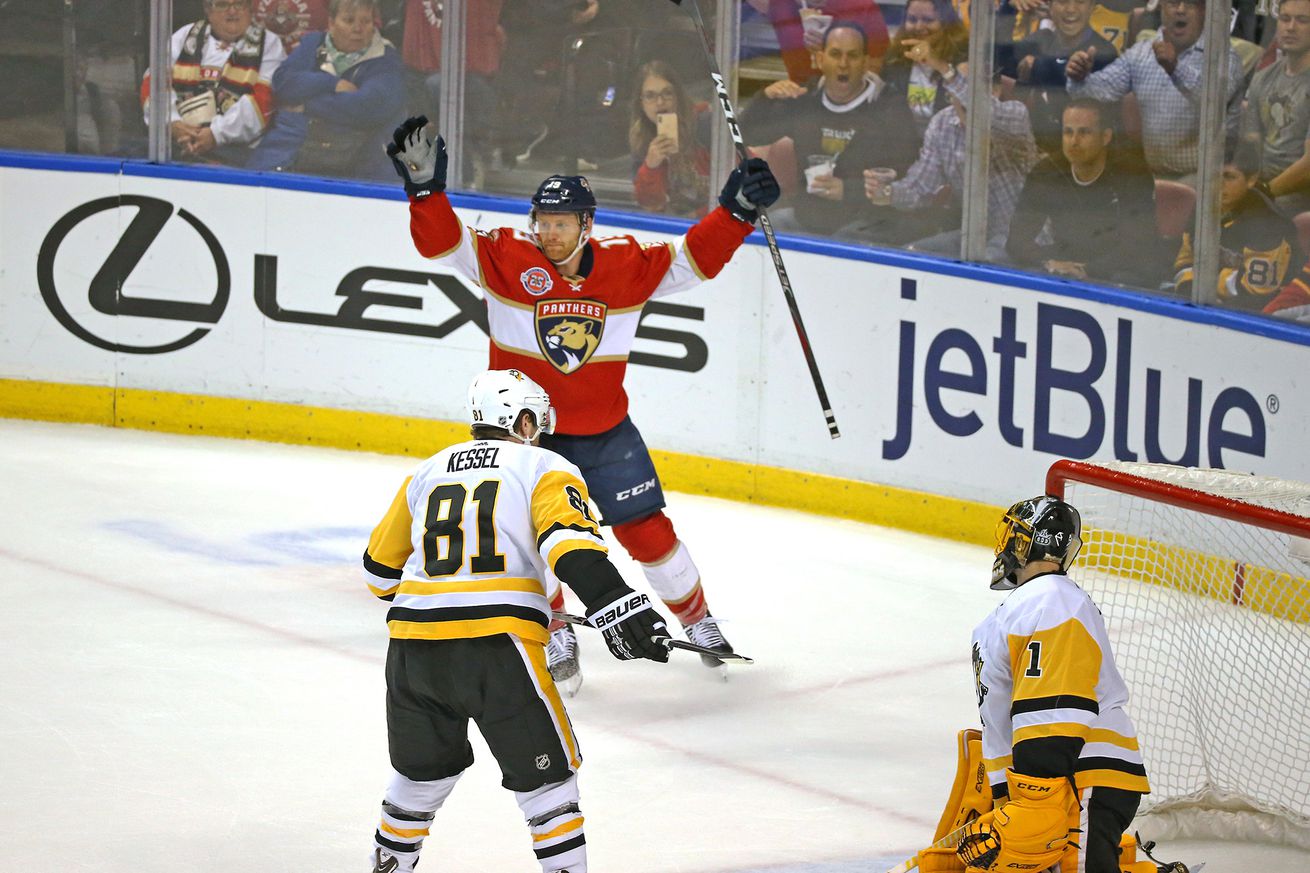 Yeah, yeah, he’s got a terrible contract — but that aside will Mike Matheson help the Penguins on the ice?

Almost every reaction to yesterday’s Patric Hornqvist for Mike Matheson trade doesn’t go too far without addressing Matheson’s grotesque contract with six years left on it at with a $4.875 million cap hit on it. There’s no way around it, that’s brutal. Matheson, somewhat hilariously, is in possession of the second highest annual value contract among Penguins’ defensemen, while probably being their fifth best blueliner.

But let’s put that aside. It’s very difficult to do, trust me I know. In a salary cap league how teams balance and stack contracts can make a big difference in how good a team can be. Decisions are important and team-building is crucial. This is all very true, but I’m still going to ask you to shut that high-level thinking of your brain off for a little bit, ok?

Because really, the future is now for the Penguins. Their championship window is very defined and is 2008-2022. It would be nice if it lasted from 2008-forever, but that isn’t the cycles in which professional sports go. As Sidney Crosby and Evgeni Malkin get to the end of their playing days and their powers eventually wane, so too will Pittsburgh’s run as a dominant team. Trading a soon-to-be 34 year old forward for a defenseman with a long contract or signing a fourth line free agent isn’t going to change this fact of nature and life.

And, that said, the Pens have been managing towards this anyways. The team has traded all first round picks from 2015-2021 (save 2019’s Samuel Poulin). Think about that again — the Pens don’t even have a first round pick for the NEXT two drafts the NHL will hold. The future is now for them. So, in that vein, six years on a contract for a fourth line forward or inconsistent defenseman doesn’t make much of a difference with the goals and position of the team.

They need to win now.

The 2020 playoff debacle showed that the Pens had two chief problems. Their third line forward group was a hodge-podge of random forwards. You had Patrick Marleau’s old self, Jared McCann cast as a center, Hornqvist thrown on there because there was pretty much no where else to put him. It didn’t go well.

The second problem was the third line defense saw half of the goals the team allowed in the fewest (and what should have been the easiest) minutes. And it was no bargain itself at a combined $8.75 million cap hit. But, my apologies, see even I can’t totally shut off any and all financial aspects, but let’s try to push forward, again thinking nothing about yesterday’s transaction with $ or term, just on-ice.

If used correctly, the Matheson for Hornqvist trade begins to address both issues. Hornqvist has aged out of being a top-six winger, at least according to the preference of Mike Sullivan. He never seemed to really fit on a third line, because while he’s probably the best player on a third line, Hornqvist isn’t configured to carry a line. He isn’t going to do heavy lifting with zone exits or entries. His play in the neutral zone isn’t going to carry the puck or make plays. Hornqvist is best as an offensive support piece, not the strong link on a non-scoring line.

Depending on what general manager Jim Rutherford does with a certain other older defenseman in Jack Johnson, the Matheson addition could completely revamp and improve the third pair defense as well.

“I just feel with the skill level that [Matheson] has and the way that Mike Sullivan handles players and the addition of Todd Reirden, how he handled the Penguins defense when we was an assistant coach, is going to be helpful to Mike,” Rutherford said after yesterday’s trade. “He’s got a pretty good package there. He can really skate. He plays the way we like to play.”

Sure, Rutherford talks up every player on the day he acquires him, so this is nothing new or particularly noteworthy. The interesting point made is the last one, “he plays the way we like to play” — which is actually true. While Matheson has a perhaps earned reputation of being inconsistent in his own end, there are several areas and attributes of his game that are strong.

He is not simply a big bad defenseman. He has one of the more well-rounded and versatile skill sets in the league

The contract is risky but the Pens could use him to great effect pic.twitter.com/Og67Q4ybyw

(Bryce didn’t hear us, so don’t read that last sentence of his tweet).

There’s a lot to like about Matheson’s micro-stats. He skates well, he can move the puck exceptionally out of his end and also into the offensive zone. He defends on the rush well. He has a lot of offensive ability and scores goals.

Bryce would also go onto tweet that this could be “potentially high reward” situation for Pittsburgh (with edits by me to omit that nasty contract talk we’re actively not trying to think about):

I get he’s been underwhelming.. but he was almost no weak attribute.

These stats were backed up by @HockeyStatsCZ where they wrote:

Matheson’s reputation is really bad after these playoffs (where he was really terrible),,,But he is not so bad defenseman how some fans think. Even he just wasn’t good for Quenneville’s system it’s not mean he is terrible or something like that

Rutherford IS correct to say Matheson likes to play the way the Penguins like their defensemen to play. He’s mobile and can move the puck up the ice.

Any “the Penguins fix defensemen” or “the Pirates are really great at salvaging pitchers” type of narrative feels very tired, and probably not even accurate or bound to last too long — and we’ve seen several examples of that.

However, another instance is worth mentioning. While the Justin Schultz career rehab is more timely and gets draws more attention, let’s think Todd Reirden here, the Pens’ returning assistant coach. Matheson at 26 years old and 299 career NHL games has a lot in common with Matt Niskanen at 25 years old and 274 career NHL games with the Dallas Stars at the time of his trade to Pittsburgh.

Reirden, a new system, a change of scene or some combination of the three all came together to help grow and establish Niskanen as a solid top-four NHL defenseman for the next decade to come. There’s no guarantee that Matheson will be able to traverse or replicate Niskanen’s mid-career reinvention, but that did seem an interesting parallel of a lot of the same circumstances aligning.

There are some issues for Reirden, Sullivan and Matheson to work through, though. While Matheson does have some positive qualities and abilities, he has a lot of work to be done, especially when it comes to turning the puck over.

The Penguins have traded for Mike Matheson.
Matheson is a great skater who moves the puck well, recovers loose pucks & wins battles at a high rate. Matheson was prone to turnovers last season, turning the puck over on almost 1 of every 5 puck possessions at even-strength. pic.twitter.com/mAhGslnFHU

Again, flush the contract, the cap hit, all of that. The Pens needed to rework their third line forward group and their third pair defense. That work is just beginning, which makes hot takes and knee-jerk reactions a little silly until the final product is seen.

Simply from the narrow view of “on ice possibilities for trading a slowing 34 year old forward for a 26 year old defenseman who can struggle but has a lot of positive qualities” doesn’t feel like a negative. A lot of the initial and instant reaction to Matheson has seemed to center on the negatives and financial ramifications — that are very important but also still to play out. If you can ignore the elephant in the room, you might be able to find that Matheson could have something to contribute in a place where the Penguins needed it.