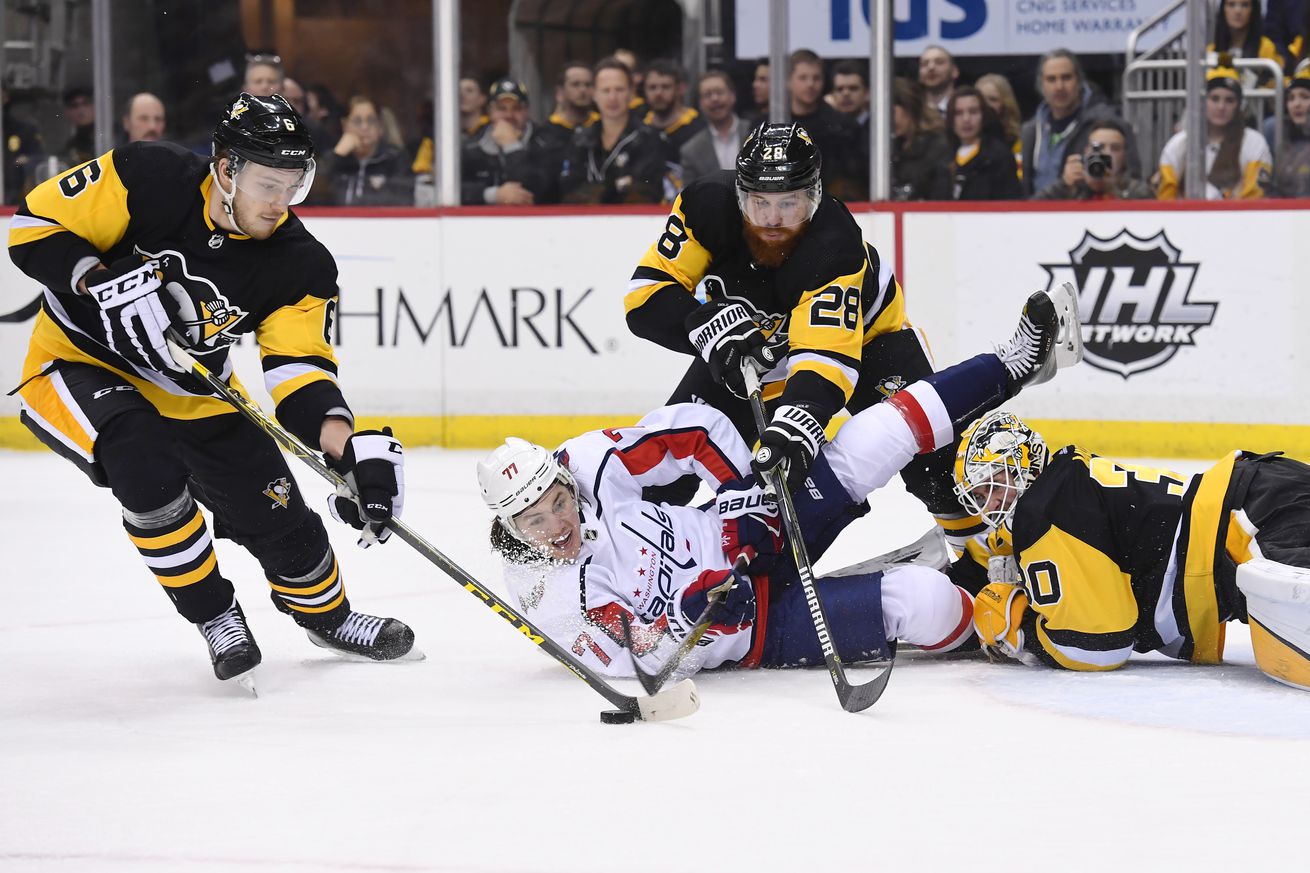 Sometimes we get emails and it’s always interesting to see what different topics and perspectives are on people’s minds. Especially if the email is received late night on a weekend. This one is a good topic and worth looking at.

I’m watching the Stars-Avs game and, along with their prior series, couldn’t help noticing the announcers calling out Jamie Oleksiak and Ian Cole, both former Pens on both teams. They seem be mentioned often and have the puck on their sticks, are making plays, and even scoring, much more than I remember with the Pens. I was wondering if you could provide some perspective on this. Are they really being mentioned a lot and truly making more plays than I remember ?

-maybe couldn’t get ahead of established Letang

Also would the Pens have been better off keeping both or one of them (there may have been cap reasons)? Would that have made a difference this year? If they had stayed in Pit, would they have grown to the potential I’m (maybe) seeing now? To be fair I thought Cole was pretty good when with the Pens but don’t remember either being this aggressive or getting shots quite like I’m seeing this year.

There’s a lot of questions there, but the gist of it all boils into a familiar topic. The Penguins’ third pair defense was dreadful this year. Jack Johnson was one of the worst players in the league, a commonality for him, since oh, well the time he started. Justin Schultz’s spiral wasn’t much prettier as he failed to regain any form or offensive production from his major injury in 2018. By the end, Pittsburgh was paying almost $9 million for two players they tried to hide with zone starts and competition and low time on ice, and those players still ended up for over half the goals Montreal scored.

Two players that Pittsburgh let slip away over the years were Cole and Oleksiak. Either or both surely would have made better third pairing players.

Ian Cole’s stint in Pittsburgh always had an expiration date, and it was when he was facing free agency in 2018. Whether it was Nick Bonino, Trevor Daley, Ron Hainsey, Carter Rowney, Matt Cullen or Tom Kuhnhackl; plenty of players after back-to-back Stanley Cup titles find greener pastures elsewhere in the free agent market. The salary cap is a mechanism to ensure that great teams just can’t retain players forever. Cole was no different, signing a $4.2 million dollar per year contract with Colorado in 2018, though the Pens traded him at the deadline they were never going to be able to be in a position to win a bidding war in free agency for Cole.

A team like Pittsburgh, with all their high-end players locked up to big money contracts, means they will invariably churn through supporting players and even have to wave goodbye to useful players in free agency. This has happened ever since the Pens have been a cap limit team, whether it’s been Ryan Malone, Rob Scuderi (in 2009), Matt Niskanen or Brooks Orpik or Blake Comeau- the Pens have always had to move and accept that the system means losing players they otherwise would have liked to keep. Cole would have been destined to join that list, just as this off-season Justin Schultz will too (though his recent form of play won’t have them shedding too many tears over that).

Could the Pens have held Cole longer? Sure, they didn’t have to trade him. In hindsight, they could have given him a lot of the money they ended up earmarking for Jack Johnson (signed that same summer for $3.25 million per year) but free agency forces often sends players on trajectories away. That’s just how it works.

There’s been some criticism of coach Mike Sullivan for not seeming to favor Cole, but second/third-ish pair defensemen in the NHL tend to bounce around quite a bit.

The Jamie Oleksiak situation was different, and more interesting since he was under team control via the three-year contract for $2.1 million that the Pens signed Oleksiak to in the summer of 2018 at the age of 25. That $2.1m cap hit was, not so coincidentally the same exact salary Cole was making.

In essence, Oleksiak was actually the Cole replacement as third pair left defensemen, with in the Pens’ misguided logic at the time of signing to believe Johnson would contribute as a top four defender (whoops).

Unfortunately, 2018-19 started slow for Oleksiak. His Corsi dipped in 36 games to 48.1% and his SCF% dropped to 49.5%. His Goals% remained high though at 56.6%. Oleksiak’s bigger problem was probably one of perception. At 6’7 and 250 pounds, Oleksiak was seen as a heavy player. But that doesn’t necessarily translate to pugilistic skills. Oleksiak got dropped in a fight with Tom Wilson in December 2018, at the height of the Wilson menace in a year that saw him throw dirty hits on Zach Aston-Reese and Brian Dumoulin.

That fight, for better or worse, was basically the end of times in Pittsburgh for Oleksiak, who only played four more games as a Penguin due to an injury suffered in the Wilson fight and healthy scratches. By then the Pens were more invested in Marcus Pettersson to stay in the lineup on the left side that had Dumoulin, Cole and Johnson as well at the time; leaving Oleksiak the odd man out.

Carrying a $2.1m salary and showing inconsistency on the ice, that was an untenable position for the team, so they traded Oleksiak (ironically for the same exact 2019 fourth round pick he was initially traded for in the first place) to clear his salary and open up more space ahead of the deadline where they would deal Cole as well to be able and fit Derrick Brassard’s salary.

Fast forward two years and Oleksiak has grown into a bigger piece of Dallas’ playoffs (playing 20+ minutes in eight of the first nine real playoff games), but even then he only played 15:49 per game this regular season.

A player like Oleksiak has proven to give variable performances. At times he can string together good games and help a team. At other times he has been inconsistent and been a healthy scratch when his game hasn’t been as mistake-free. It’s not so much that Oleksiak is “better now” than he was with Pittsburgh, he’s just experiencing a run on the top-end of his capabilities, which his career path has shown there will be a probable regression at some point.

In the end, the tracking of Cole and Oleksiak wouldn’t look so bad if the Pens had three quality left side defenders, as a team with contending aspirations should have. But their contract and reluctance to stop playing Johnson, despite his terrible results, does leave a lasting cloud and legacy on the personnel decisions of the past few years.

On its own, either decision to move on from lower-lineup players like Cole or Oleksiak isn’t in itself the big issue. Without term on contracts, those types of players tend to float around the league as a function of the salary cap world. Pittsburgh’s bigger issue that has impacted performance in the past few years was the players they chose to acquire (like Johnson, Brassard and to an extent Ryan Reaves) that didn’t hold up their end of the bargains with their own play.