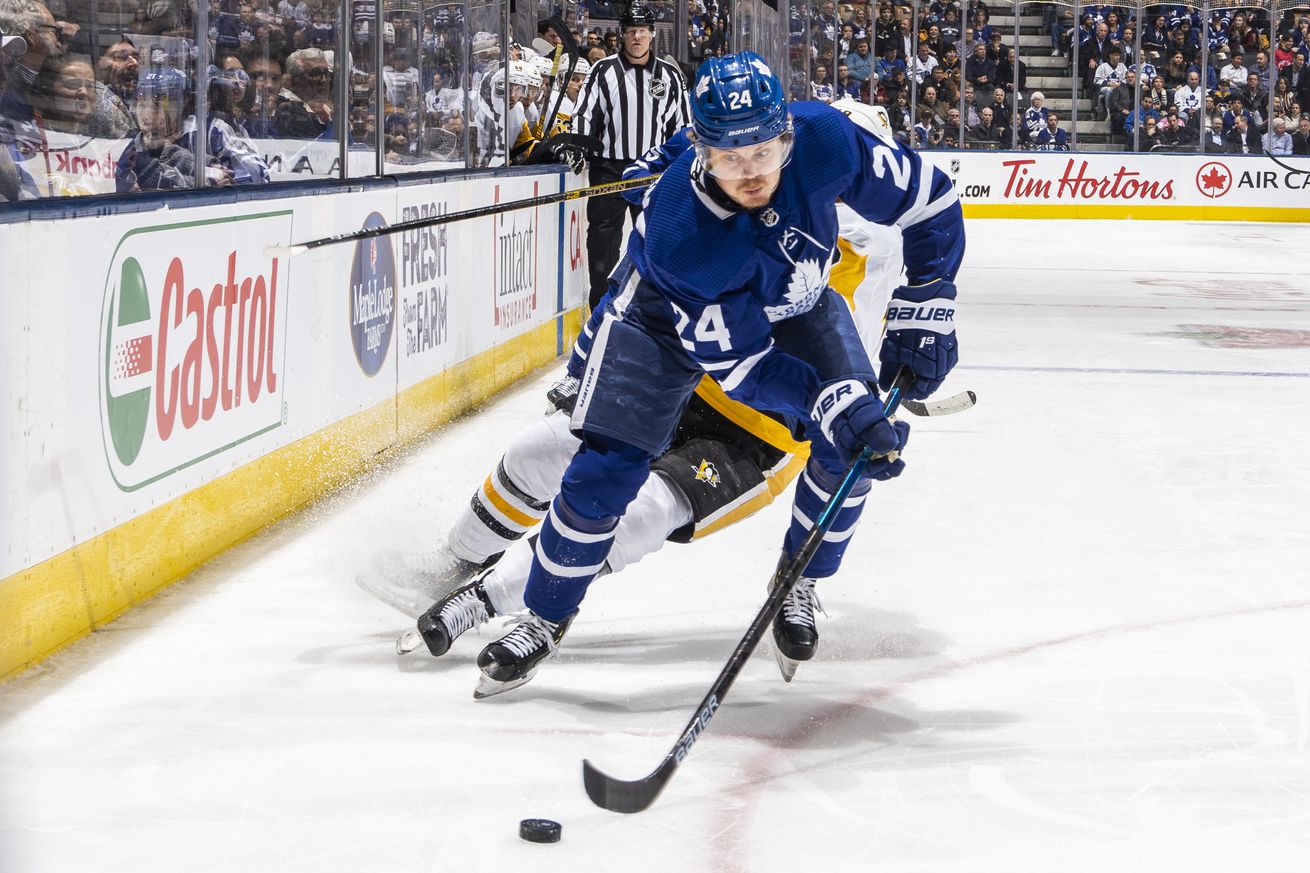 The Penguins’ coach was talking lines, and it’s a big opportunity for one of the newest players in Kasperi Kapanen

Earlier this week on the Penguins official podcast The Scoop, coach Mike Sullivan spoke about initial plans for new acquisition Kasperi Kapanen. Given that the Penguins gave up a first round pick for Kapanen, it’s no surprise that the team is going to hope Kapanen will factor into next season heavily. And that means a starting spot on the top line with Sidney Crosby and Jake Guentzel, according to Sullivan.

“We think he brings that speed dimension that I think is complementary to Sid and Jake’s game,” Sullivan told The Scoop podcast. “And he’s shown the ability to finish. He’s scored 20 goals in this league (2018-19). He has elite speed, he has good size, so he brings a size dimension (6-foot-1, 194 pounds) to that line as well. So when we play in games that tend to be heavy in nature, I think [Kapanen is] a guy who can help us in that capacity. We think his skill set could potentially be very complementary to Sid and Jake.”

“I don’t think it’s any secret that speed has been part of the fabric of the identity of this group,” Sullivan said of Kapanen. “We’re trying to surround our core with as much speed as we can, and he’s going to help us in that capacity. He has some finish, he’s a good penalty killer, he’s got good size, so he makes us a little bit bigger, which is an area we think we could improve. He checks a lot of boxes.

“We think we’ll start [Kapanen] with Sid and Jake.

It’s an interesting line of thought for Sullivan, and it makes sense. Invest a first round pick to bring in a young, fast player who has at times been productive. Playing him with Crosby is as good a place to start as any, especially when the Penguins’ right wing spot has shed Patric Hornqvist from last year’s team.

Our friends at Pension Plan Puppets had a deep-dive on Kapanen as a player, which I found interesting. Here’s one segment:

Getting into the quote a little bit, Sullivan points out Kapanen’s speed, which is definitely his defining quality. Kapanen is a great skater, with blistering transition ability. However, the issue the Leafs (and fans) ran into was the imaginary wall looking like the front of the net that Kapanen would button hook in front of on breakaways. He has the speed, but he needs someone to finish it for him. That was where things fell apart for the Leafs, as they didn’t want him in their top-six and couldn’t help him on a third line that was quickly moving away from a top-nine into a bottom-six role.

This talk again makes the Guentzel+Crosby fit sound like a good match for Kapanen. He needs a finisher at the net? There’s two players with a nose for the net and gift of hands to score from in tight. Maybe it will even rub off a bit on Kapanen. If he has all the tools besides getting or staying at the net, that is an element that can be taught, to an extent. Whether or not the lesson sticks consistently is another matter.

The notes about Kapanen’s transition game sticks out a lot too, and is an important note. It feels like a big segment of the Pens’ fan base saw the sticker shock of giving up a first round pick plus a fairly unimpressive 13 goal + 26 assist (in 69 games) season last year and have been unimpressed. But there are elements on the transition where Kapanen will help.

All the solid transition play and flashy foot speed in the world isn’t going to be worth a lot if Kapanen doesn’t score. He will certainly have to rebound above what he produced in 2019-20. PPP continued:

Speaking of finishing, Sullivan then brought up Kapanen’s finishing ability, noting that he scored 20 goals next to Auston Matthews (and Nazem Kadri). Crosby is definitely someone that will be able to make the most of Kapanen’s raw abilities; throwing him the puck in front of the net and finishing as a secondary attacker off the rush. Guentzel is also a quick player who should be able to keep up with Kapanen when he goes off ahead of the rest.

Another aspect to Kapanen’s offensive ability is his play when possession is settled in the offensive zone. Kapanen tends to disappear and be less effective when he has to cycle around the offensive zone and gets shots off against a set defense. With Crosby, Kapanen will definitely have to go up against the best of the best in this regard every night, this is not something he’s done before in his career.

The note about play style is a red flag. The best Crosby wingers (Chris Kunitz, Pascal Dupuis, Patric Hornqvist, Bryan Rust etc) tend to be strong on the cycle game and willing to work hard in the corners to win pucks back and be successful at puck battles. Crosby’s game is predicated on grinding and out-working defenders down low.

Can Kapanen adjust there? That will be a worthy item to track, and perhaps be a major key on if Kapanen will sink or swim with the first line.

Style-wise, if that doesn’t work, Sullivan still has options.

We’ll see how it goes, and if we have to make adjustments, we’ll make adjustments. But when you look at our top six right now with Sid, Jake and Kapanen and then Geno (Evgeni Malkin), Rust and [Jason] Zucker, it’s a pretty solid top six.”

Rust often ends up on Crosby’s right wing (as he did for the final game of the season vs. Montreal). Sullivan is also known to rotate third members of lines with frequency. It wouldn’t be shocking to see Kapanen and Rust get flipped at some point when the situation calls for a brief shakeup.

Based on his uneven 2019-20, there’s a realistic cause for concern about what the Pens are getting in Kapanen. They clearly are banking on him taking even a small step ahead of his 2018-19 results (20G, 44 points in 78 games). But his most recent season does show a player who got bumped out of the shuffle a bit in Toronto.

If Crosby, and to an extent Guentzel, are able to help Kapanen elevate his play, the Pens are likely to be happy with the immediate boost to their team that a 2020 first round pick wouldn’t have provided. If that doesn’t work, Pittsburgh can try Kapanen with Malkin, but it would be a sign that they didn’t quite get as much as they were hoping for.

Pittsburgh wants to contend again as the sun slowly starts to set on the peak power of Crosby and Malkin’s career. The speed, transition game and amount of production Kapanen can (or can’t) provide will be a very big factor in determining if they really can in 2021.