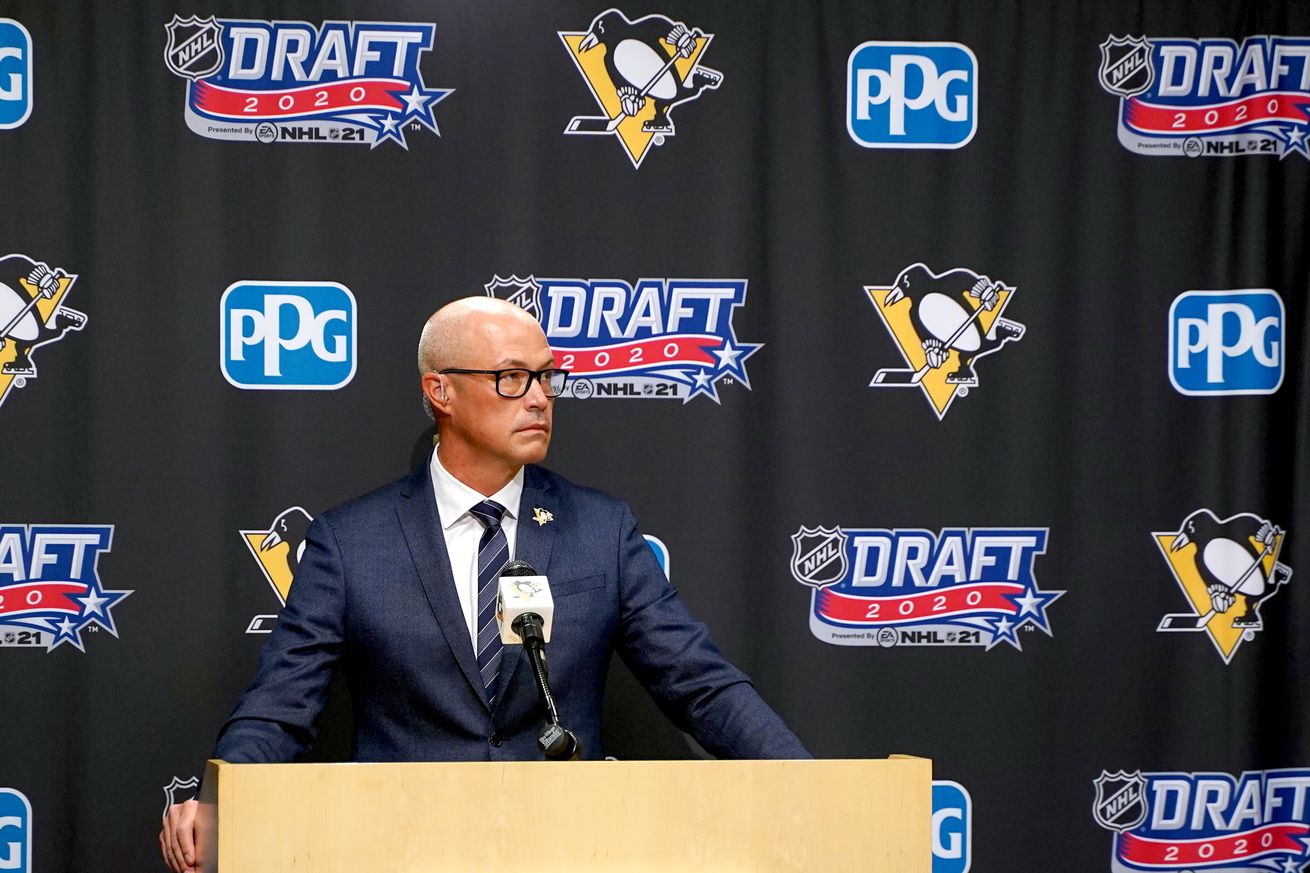 Pittsburgh completes a busy draft day by shipping out a starting goalie, and adding a few prospects

The Penguins 2020 NHL draft will best be remembered around goaltending. The trade of Matt Murray sent out a 2x Stanley Cup winning netminder, and the main piece of the return was the 52nd overall pick from Ottawa. Pittsburgh used that selection on Finnish goalie Joel Blomqvist.

The Blomqvist pick was lauded by The Athletic’s prospect guru Corey Pronman, who in part wrote:

I really like Joel Blomqvist, who the Penguins got at 52 and he was my No. 2 goalie

Blomqvist had a very good season, leading the Finnish junior circuit in save percentage and being the No. 1 goalie for Finland’s U18 team. He has a powerful lower body, allowing him to move across the crease very well and make tough saves. While he is very quick, his movements are often in control as he is rarely way out of position. His puck tracking is fantastic. Blomqvist is rarely fooled by opponents passing plays and stays square even when the puck is bouncing through traffic.

One knock on Blomqvist is that he is only 6’1, which while not a negative is a bit shorter than the direction the size of goalies has been heading in the NHL lately. A positive for Blomqvist is that other injury has thrusted him into the starting role in the SM-liiga for Karpat early in this season. He is 2-0 with a .910 save% early and should have a chance at just age-18 to play a big role in a solid league.

For the Pens third round pick, surprisingly enough they stuck with the goalie position taking 6’2 Swedish product Calle Clang. Clang currently plays for Kristianstads in the second division HockeyAllsvenskan.

“[Clang] might be a little bit further ahead in his body composition [than Joel Blomqvist],” director of amateur scouting Patrik Allvin said. “But the same there – a really good, competitive player. He’s a play-reader as well.”

At the end of the draft, the future in the crease is a lot better stocked for Pittsburgh.

“We ended up taking two top goalies in our minds in Blomqvist and Clang,” general manager Jim Rutherford said. “You just can never seem to have enough. You got to keep developing them, and certainly that’s a system we have.”

To that point, the system definitely needs new goalies. 24-year old Emil Larmi and 21-year old Alex D’Orio are the only two goalies with the Pens currently, and both seem like long-shots to make NHL impacts at this point.

“I think they were both intriguing players,” Allvin said. “Just ended up turning out that both were available there, Blomqvist in the second round and Clang in the third. We talked about it, we felt that both guys are very intriguing moving forward. It just turned out great that way.”

From rounds 4-6, the Pens shifted gears and added three forwards, all of whom play in North America to go along with another young forward prospect in Jonny Gruden.

Lukas Svejkovsky, the fourth round pick, has the most offensive promise, Pronman spoke to his “good speed and puck skills” as well as poise and patience with the puck. Look for Svejkovsky to improve on his point production in juniors over the coming seasons as a sign of what kind of player he could develop into.

“We thought his game took off in Medicine Hat,” Allvin said about a trade last year. “He is an intriguing player because of his hockey sense and skill level – and also a good skater.”

Svejkovsky scored 28 points in 34 games with Medicine Hat, as Allvin referenced, and he should grow into a bigger role with more where that came from.

Lower round picks Raivis Ansons and Chase Yoder are more in the mold of lower-line, checking forwards. If those types of players could be the next wave of players like Tom Kuhnhackl, Scott Wilson, Josh Archibald types that Pittsburgh has developed, the team might not have to go out and sign expensive lower line players for age 27+ when they can have them for younger years.

Fifth round, 149th overall: PIT selects Raivis Ansons. Big, heavy-bodied Latvian forward. Plays a very dilligent defensive game and drives the net hard at the other side of the ice.

Ansons isn’t a bad skater at all for his size. Good edge work and picks up speed quick for his size. Handles the puck poorly though. Great at retrieval’s and support play. Not the kinda guy you want leading the rush. Pretty bullish on his shot as well.

Chase Yoder is heading to Providence College, which is the same place that Brandon Tanev matriculated at. Former Pens’ assistant coach and current Wisconsin coach Tony Granato also made a playing style comparison between Yoder and Tanev.

The other player to remember is Gruden, who is two years older than these draft picks and a little more developed. The Penguins main webpage had a nice writeup on Gruden who offered some thoughts on his game:

“You could plug me in anywhere in the lineup and I’ll be effective,” he said. “I’m pretty versatile and I just like to bring whatever I can to the table, whether it’s hits, scoring goals, making plays – kind of a little bit of everything.”

“So I’m trying to get better every day. And then to get to the next level, I kind of want to work on my speed because it’s a fast game and it’s getting faster every year. So just kind of work on my speed and the rest will take care of itself.”

Rutherford and Allvin also weighed in.

Rutherford on Gruden: “He’s a player we liked when we watched him play in London. He plays a real determined game. Great character. It’s going to take him a little bit to develop, but he’ll have a chance to play for the Penguins at some point.”

Director of Amateur Scouting Patrik Allvin on Jonathan Gruden: “This will be a good path for him, starting in Wilkes-Barre and learning our organization and learning the way we play. He’s a hardworking player, competitive, and has good details to his game.”

In the end, the Pens will hope for development from the forwards from the 2020 draft and see what happens there, but the main factors of success will ride on how their European goalies grow.

Here’s the full litany of additions this week with more detail on each:

—20 year old forward prospect Jonathan Gruden, a 4th round pick in 2018 by Ottawa

—And a 2021 7th round pick next year from Washington, in exchange for the seventh round pick the Pens got by trading down in round 5

2021 is shaping up to be another long-shot type of year, with the Pens already trading away their first, third, fourth and sixth round picks. The team has picks in the 2nd and 5th rounds, as well as three selections in the 7th round (their own, Anaheim’s and the aforemention Washington pick), as well as the potential to add Minnesota’s due to conditions of the Nick Bjugstad trade. Bjugstad must play in at least 70 games or score 35+ points to transfer that pick, so it seems likely, especially in a possible shortened season that this won’t happen.