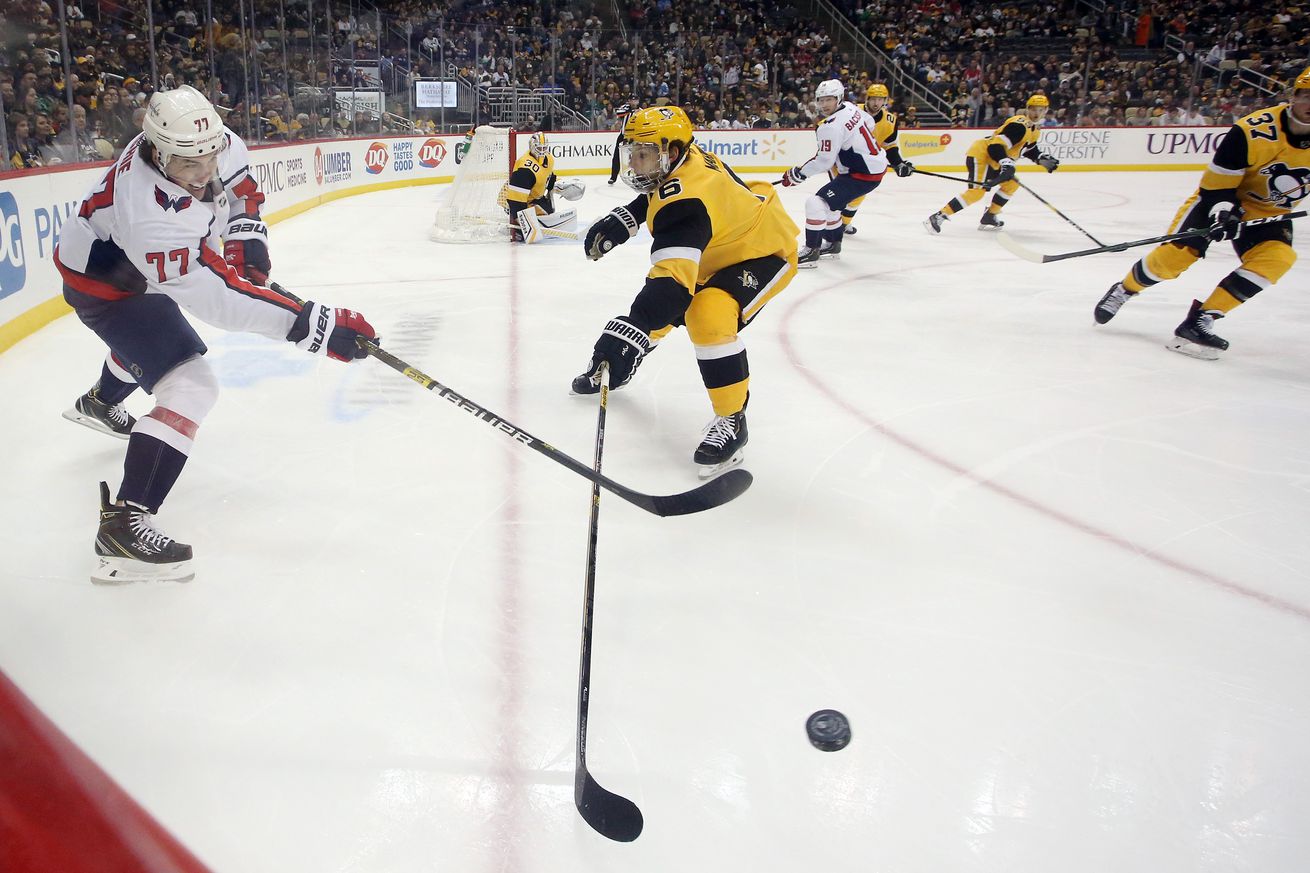 Someone should have told the Pens the game started at 1:00…

Make it three starts in a row for Matt Murray, who has captured the confidence of the coaching staff right now. Also, after scoring in a Penguins/Capitals game earlier this season, Sam Lafferty rotates in for Evan Rodrigues on the fourth line.

The Caps strike first, 1:52 into the game. After a dump in that Murray didn’t play (maybe he thought with the angle it would be wide of the net and icing?). Richard Panik gets the puck in the corner and passes it behind the net. Brian Dumoulin is a step slow and can’t break up the pass to Garnet Hathaway. Hathaway quickly chips a pass out to Nic Dowd who is uncovered in a priming shooting area. Dowd’s quick release foils Murray, it’s 1-0 Washington early thanks to their fourth line.

Dowd opens the scoring for the Caps. Rare moment where Letang and Dumoulin didn’t handle a dump in and no one tracked Dowd into the slot. pic.twitter.com/N4JsXF7KJ7

Six minutes in the Pens get the game’s first power play when Brendon Dillon interfered with Sam Lafferty. The Caps make it 1:25 worth of a 5v3 when Washington gets rung up for a too many men call on an attempted line change. Pittsburgh gets some zone time and a few looks at the net. Sidney Crosby had an empty net but a reaaally tough angle and couldn’t put a bouncing puck in.

The rest of the period, Washington is more in control of the puck, but it’s an unusually quiet, normal type of game. Don’t often see that in Pens/Caps. The Caps get a second goal off the rush, Jakub Vrana feathers a nice pass through Dumoulin to hit Nicklas Backstrom in stride and in all alone. Backstrom calmly lifts the puck back against the grain to score his 12th goal of the season and make this one 2-0.

Before the period ends, Washington makes it 3-0. Another odd-man rush and the Caps make a bunch of nice passes around Jack Johnson and Panik is all alone in front with Murray scrambling to follow the puck. It doesn’t end well.

Panik with the patient placement of the puck *chef’s kiss* pic.twitter.com/ipCF1PSRFr

Shots are 12-6 Washington, Pittsburgh was the team with 1:25 worth of a 5v3. Yikes. The Pens getting run out the building after failing to wake up for this game.

Looking for a push the Pens only get three shots on goal for the first 18 minutes of the period, two of them long range, no traffic efforts.

The game heats up though, the door gets cracked when Jared McCann is awarded the Pens’ first penalty shot of the year and…no dice against Braden Holtby.

The Pens keep pushing and get a goal mouth scramble. Brendon Dillon makes a pretty smart play to remove the net from its moorings to stop the danger. He gets called for a delay of game, but that’s probably worth it in the situation.

Dillon knocked the net off on purpose pic.twitter.com/gD18BUHDA9

The Pens’ carryover power play does not go as they hoped. Carl Hagelin grabs the puck and starts a 2-on-1. They make two passes through Letang (oof) and Nic Dowd pulls the trigger for his second goal of the game to make the score a commanding 4-0 lead for the Caps.

Pittsburgh doesn’t go away though, Conor Sheary makes a nice move circles the net and makes a nice centering pass for Sidney Crosby who is able to tap it into the net. 4-1 game with still almost 15 minutes left in the game.

The Pens’ push continues they get yet another power play and Evgeni Malkin strikes with a wrister from distance to make it 4-2 with 6:48 left.

But the comeback attempt ends on the next shift, more puck watching on defense by Pittsburgh leads to some fancy passing by the Caps and TJ Oshie gets a quick shot off. 5-2

The Pens don’t quit, they call a time-out late and pull Murray for an extra attacker but fail to score and time runs out.

Another slow day start. Day games should just start 1-0 other team. Today was no exception, and I believe that’s like 10 straight games of falling behind, often times not only going into a 1-0 hole but getting in it quickly. And, 3-0 before they knew it.

Chances wasted. The Caps gave up 3+ goals in all of their last 10 games and 16 of the last 19. They did their part to give the Pens a chance at it with six power plays. McCann had an unsuccessful penalty shot. Patrick Marleau upped his post count with the Pens to 3 (in just 6 games). The luck contingent didn’t go the Pens’ way. And they didn’t work hard enough to give themselves a chance otherwise.

The good news (I guess?) is the Pens get a chance to wash this bad taste out of their mouths tomorrow. The bad news — it’s another day game.

Odd man chances against. This game looked a lot like the 2018 playoff series between these teams, and that’s definitely not a good sign. The Pens’ were pinching in and failing to win pucks and the Caps were off to the races the other way. Washington’s shooting talent came through by converting plenty of opportunities that they created. The Pens are going to have to go back to the drawing board on some of their decisions and strategies to avoid this the next time these teams meet.