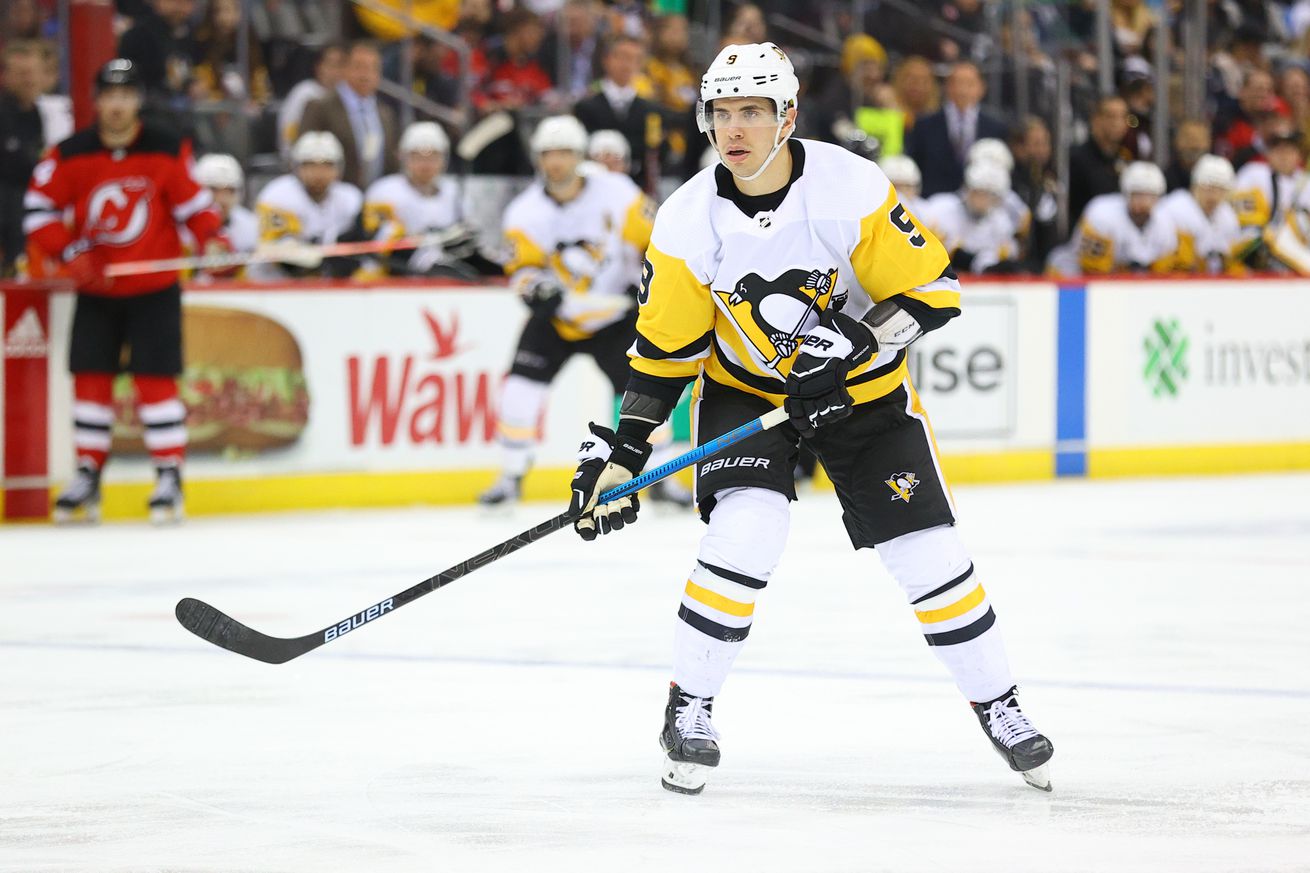 Entering yesterday’s start of free agency, the Pittsburgh Penguins made two signings that they hope will solve their third line questions.

In the playoffs, their third line ended up being a major weakness with Jared McCann centering Patric Hornqvist and Patrick Marleau. McCann was a healthy scratch in Game 3 and had the least amount of minutes of any Penguin in Game 4. Hornqvist scored one power play goal all series. Marleau, well, he dressed all four games and that’s about all you can say there.

The Pens were on a budget, entering the day with less than four million dollars of salary cap space. But they made two signings for league minimum in the form of Evan Rodrigues and Mark Jankowski.

Jankowski is 26 years old. Rodrigues just turned 27. Neither were given qualifying offers by their respective teams. Yet hours into free agency — a free agency day one that saw no forward sign for more than Alexander Wennberg’s $2.25 million with Florida — the Pens signed both players to identical one year, $700,000 league minimum contracts.

The contracts alone suggest not much more than being depth options, but the team has already indicated bigger plans are in mind. The big question entering the day was what would they do with McCann? Was he seen as a center or winger? That has been answered, at least for an initial intention.

“Of course, other players can jump in and get a spot at camp,” general manager Jim Rutherford said yesterday. “But if you look at what we did [Friday], Jared McCann would be the left winger, Jankowski would be in the middle and Rodrigues on right wing.”

And, just like that, Rutherford saw himself making moves to fix his third line.

This mindset also allows the Pens to move forward with their “buzzsaw” line, or at least elements of it since Zach Aston-Reese will start the season on the injured reserve following shoulder surgery. Last season, due to the excellent defensive play of ZAR – Teddy Blueger – Brandon Tanev, all the other regular forwards on the team enjoyed at least a 54% offensive zone start percentage for their shifts. That’s a major advantage, especially for this new look third line.

And whether it’s Sam Lafferty or Colton Sceviour in the lineup to replace Aston-Reese to start the season, the “buzzsaw” building blocks of Blueger and Tanev will remain, sure to again eat a heavy defensive load and free up the other three forward lines.

Which means a major focus will shift to the new-look third line actually driving results.

“That gives us speed on the wings and gives us the defensive center we’re looking for,” Rutherford said. “I don’t want to compare Jankowski to [Nick] Bonino, that’s not what I’m doing, but it’s more along the lines of [getting at] what we had when we were having more success in 2016 and ‘17.”

With due respect to Rutherford, Jankowski is probably more like Nick Bonino than Rodrigues or McCann are to the 2016 versions of Carl Hagelin and Phil Kessel, respectively, but life will move on just the same.

There’s no doubt the Pens are projecting a bit with Jankowski and Rodrigues. You can’t get players on league minimum deals without being willing to accept risk and project better days ahead. Still, that idea comes with a bit of promise.

Pittsburgh loved what Rodrigues brought to the table after acquiring him in February, even if that made for a contradiction when they made him a healthy scratch for all of the playoffs in favor of Marleau. At 42, Marleau was hall of fame level veteran who only disappointed, but was given all the rope in the world to do so — out of a seeming deference to his body of work more than his current ability.

But Marleau is gone now and Rodrigues is a player that tantalizes with more beneath the surface. It’s been a while, but he is a player who once scored 61 points (21G+40A) in 41 games in 2014-15 at Boston University riding shotgun with a guy named Jack Eichel (ever heard of him?) Rodrigues also scored 9G+20A in Buffalo in 2018-19. He has some serious skating ability, is a right-hand shot and can capably play any forward position. He’ll offer some aspects the Pens haven’t had in a while, even if they didn’t step up and use him last year when they had the chance. Now, according to Rutherford, Rodrigues will get that opportunity.

Jankowski is even more intriguing, and since mentioned in the same breath as the lofty Bonino, it’s clear Jankowski the key to the additions at this point. In his first full NHL season in 2017-18, Jankowski notched 17 goals and 25 points with the Calgary Flames in 72 games. He followed that up in 2018-19 with 32 points (14G+18A) in 78 games.

If that feels unsatisfying, remember that Bonino scored just 29 and 37 points in his two regular seasons in Pittsburgh, while adding responsible two-way play and penalty killing that goes unnoticed in the pure boxcar stat line.

The rub comes with Jankowski’s most recent season in 2019-20 where he recorded just 5G+2A in 57 games, a steep drop-off from his early career trajectory. Therein comes the risk and the wart that allowed the Pens to sign Jankowski for league minimum. He’ll need to bounce back and improve off last season’s results. A ridiculously low 4.42 5v5 on-ice shooting% suggests that Jankowski was the victim of bad luck and/or poor teammate execution last season.

“That’s not a good year for a player like that,” Rutherford said. “I’m sure if you asked him and the Flames, they would say they had higher expectations. But I don’t think that having 17 goals and 14 goals in a year and playing as a defensive center is all that bad. What we’re looking for is for him to get back to that, where he was two years ago and three years ago. I would hope that with the players we have, the forwards we have and the defense we have, that we should be able to score enough goals.”

Which is where Jared McCann comes in. McCann’s shooting ability tantalizes the Pens. They even worked him out on the first power play last summer briefly with the idea his wrist shot would hit. That didn’t quite work out, but McCann has scored 14 and 19 goals in the last two seasons, even with a lengthy 25-game goal drought at the end of last year.

McCann is streaky and an unreliable consistent production player, but he has shooting talent and is 24 and can get around the ice well himself. Plus now he has less defensive responsibility being as he’s already being keyed in and identified as a winger.

As Rutherford directly states, the Pens envision a scenario where Jankowski can get back to his 2017-19 form which means that McCann will have to be the skilled component of this line that will hopefully approach 20 goals. Add in a wildcard factor of Rodrigues, a player who has speed, energy and shown limited bursts of skill in his career.

For Jankowski, in Calgary a slump got him shuffled out behind centers Sean Monahan, Mikael Backlund, Sam Bennett and even Derek Ryan. In Pittsburgh, Jankowski is going to get a better chance. What he does with the opportunity is open to all range of possibilities, but the 6’4 former first round pick showed from 2017-19 that he looked the part of a capable third line center. Can he be the part in Pittsburgh?

That’s the bet the Penguins have made.

After day one of free agency, the Pens have a lot more raw material to work with. If everything goes according to plan, they will bank on Jankowski and Rodrigues showing more than they’ve previously put on display at the NHL level to add a better level of play than they got last year.

If they’re right, they’ve fixed the most important question they had lingering. If they’re wrong, they can build on the $2.5 million of cap space they have left which would grow throughout the season and be available to add another option via an in-season trade.