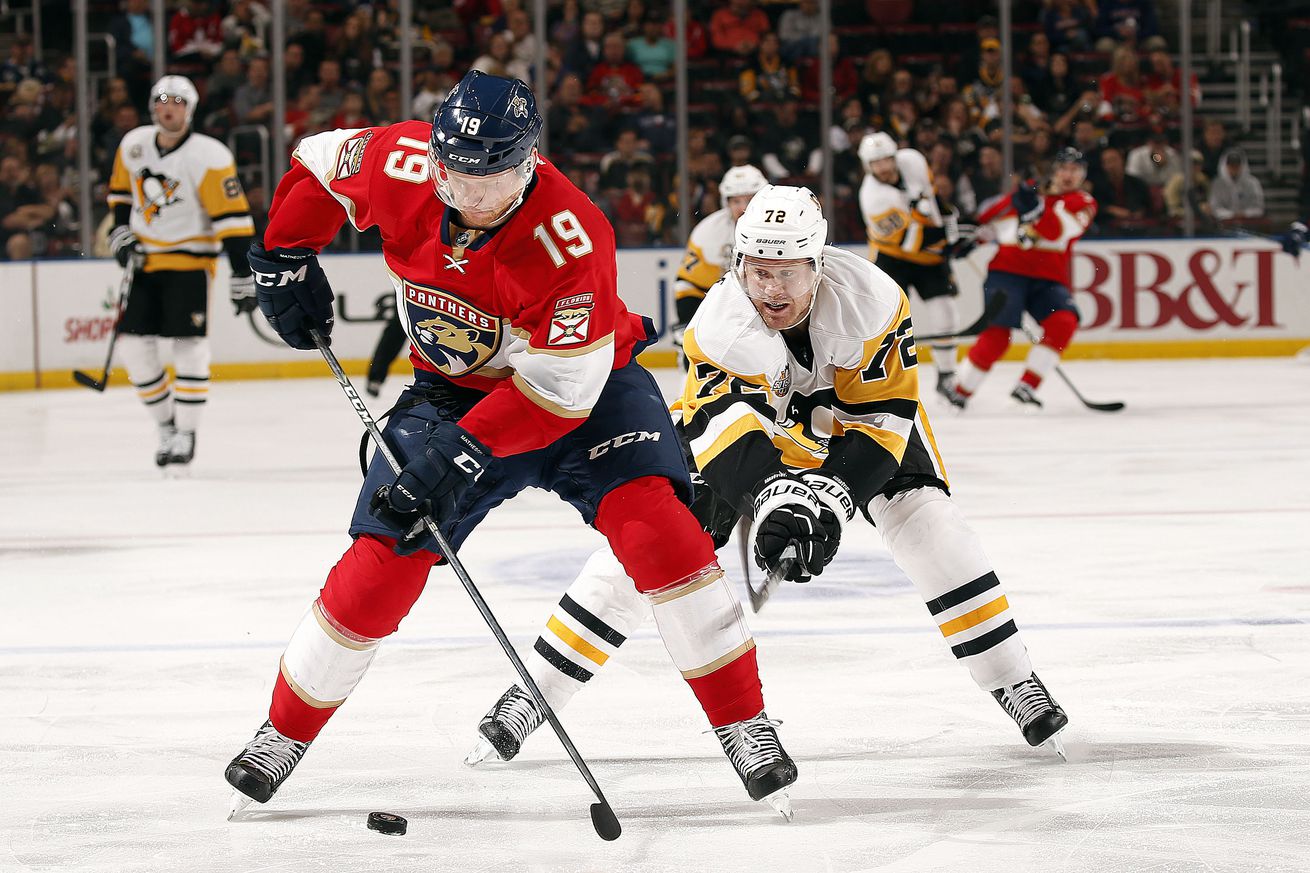 A look at all the twists and turns of a trade that almost happened but hasn’t….Yet. Where Patric Hornqvist to Florida for Mike Matheson stands

It was a quiet day up until 11:17 this morning, when former Pensburgh podcast guest Kevin Weekes broke some news via twitter that shook up the hockey world.

“As per what I’m told – the @penguins are trading F Patric Hornqvist to @FlaPanthers in exchange for D Mike Matheson,” was the tweet.

Before long, the instant reactions were ticking in about the deal itself. After all, almost always when a report that strong from a credible source hits social media, the confirmation from official accounts once the finalization comes through isn’t long to come.

Yet, official world did not come out, and just a half hour after Weekes’ broke the news, fellow in-the-know reporter Elliotte Friedman tweeted there was a “glitch” causing a delay in wrapping up this transaction.

This evening, Friedman published a story on Sportsnet about how the Penguins/Panthers trade was apparently “falling apart” throughout the afternoon.

The two teams were considering it, and, from what I understand, there were two hurdles. The first was Hornqvist’s no-trade. The second is his contract. The Panthers had concerns about insurance in case of injury, and would the winger’s deal be covered?

GM Bill Zito was in Columbus when the Blue Jackets had a similar issue with Nathan Horton. That contract was not insured, and, therefore, a financial headache when he could not play for the final six seasons of it. (Eventually, they traded Horton to Toronto for David Clarkson, a move that allowed the Maple Leafs to use Long-Term Injury relief.)

You could see why Zito would be concerned about that.

Whatever the case, it sounds like the news got out before either issue was settled.

Some instant reaction was negative towards Pittsburgh general manager Jim Rutherford, as if he simply forgot to ask Patric Hornqvist to waive his no trade clause before agreeing to a trade to send him away. That criticism doesn’t look to be very accurate, especially since NHL general managers are often chatting and touching base with each other in loose conversation that can draw out over weeks and months as they explore which teams might have interest in certain players, and what teams are willing to deal away.

As Friedman writes at the end there, a big problem was information got out before a final decision and agreement was made between all parties. Weekes wasn’t wrong to say what he said, as Pittsburgh/Florida was clearly discussing this trade, yet in 2020 sometimes the news of a transaction can actually outpace the actual transaction. And that could be what happened here.

From a Pittsburgh perspective, The Athletic’s Josh Yohe wrote a tweet that taken in context with Friedman’s information adds up into a logical piece of the puzzle as well.

And by the way, while the Penguins and Panthers were obviously close to pulling this off, the trade might not happen at all. Clearly information got out before the teams would have liked. Sounds like things are totally stuck now.
Like I said, the Penguins…never boring.

“Totally stuck now” doesn’t sound very promising. Then again in the world of NHL transaction nothing happens until it happens, and it only takes one change of mind or a new proposal to go from nothing to a completed deal.

As of now, with the trade “stuck”, it might simply take Panthers’ GM Zito to internally debate and decide if he can live with the risk of Hornqvist getting hurt to justify getting his team off the hook for six years of a player who struggled in the 2020 playoffs in Matheson. Then again, with time ticking, the Pens could always pull back and look for a new angle or totally different team or negotiation to try.

This Hornqvist almost-trade is reminiscent of the February 2018 trade that sent Derrick Brassard from Ottawa to Pittsburgh, and involved the Vegas Golden Knights. You might remember, the NHL actually rejected the transaction and forced the teams to re-structure the trade.

If you care about the details, as we wrote back then:

Pensburgh has learned that the main issue the NHL had with this trade involves the reserve list and salary retention. It is believed that the way the deal was initially presented, the Vegas Golden Knights were agreeing to retain salary for Derick Brassard, a necessary step to keep the Pens under the upper limit of the salary cap.

The issue according to the league: Vegas can’t technically retain any of Brassard’s salary due to the fact that Brassard has never been a member of the Vegas organization.

Basically the Penguins were using Vegas to park some of Brassard’s salary cap hit, so that Pittsburgh could afford to get Brassard and stay under the upper limit of the salary cap. But Brassard wasn’t a member of Vegas, and the Golden Knights were giving up no assets, simply using their cap space to get Ryan Reaves and a draft pick. So the parties simply reworked the deal, Vegas sent a low-level AHL player in Tobias Lindberg to Pittsburgh, appeasing the league that VGK gave up an “asset” in exchange for receiving Ryan Reaves plus a 2018 fourth round pick from Pittsburgh, the Pens gift to Vegas for VGK holding 40% of Brassard’s cap hit.

However, this 2020 trade has some meaningful differences from the 2018 train-wreck of a trade attempt that was the three-team deal for Brassard. It has NOT been reported that the Pens and Panthers actually submitted the trade paperwork to the league, a key designation. Today’s “almost trade” doesn’t appear to have ever made it all the way to a trade call to confirm details and get league approval, and stalled before getting to that point.

Ultimately, what Weekes threw out in public light was details of a fast-moving trade negotiation that by good information was rapidly moving towards finalization. Only as Friedman said, “the two teams were considering it”, as in the negotiation wasn’t completely officially signed off on, due to Florida’s concerns about the potential ramifications of a Hornqvist injury.

One other item learned to file away is that the Penguins pretty clearly would like to move on from Hornqvist. This isn’t a shock since his name has been in the national trade rumor mill, and the team’s stated mission was to get “younger and faster” this off-season. Hornqvist is the second oldest forward on the team at 33, and not a very fast player. He’s been bounced down to the third line, and at times not even the first power play. He carries a hefty $5.3 million salary cap hit.

All signs point to him being a player a team would probably like to trade, with the major obstacle being Hornqvist’s full NTC as well as probably taking back a not-so-great contract in return for his own not-so-great contract — which would have been the case with Matheson’s six years remaining on a $4.875m cap hit.

Time will tell if this deal gets “unstuck”, but for one day a major move left the Pens and their fans in limbo as confirmation of a reported trade hung out there but never reached the finish line.