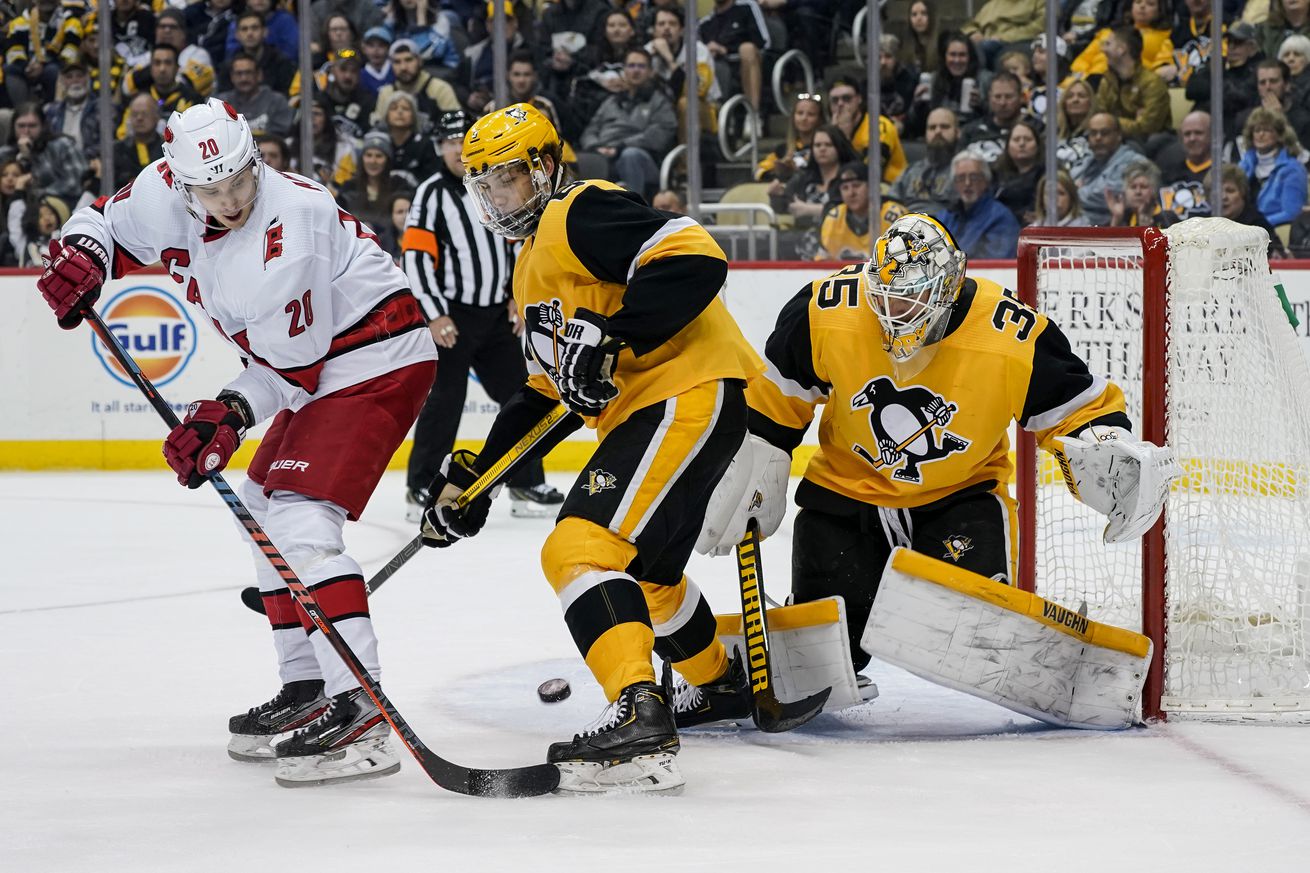 It was not a good weekend for the Pittsburgh Penguins

The Penguins make two changes from yesterday, Evan Rodrigues is back in the lineup at Sam Lafferty’s expense and Tristan Jarry gets the nod in net.

Lined up and ready for action. pic.twitter.com/KHqJGn0RaR

Poor start as Evgeni Malkin takes his eighth minor penalty in the last nine games by slashing the stick out of Brady Skjei’s hands away from the play. Luckily for the Pens, early into the power play Andrei Svechknikov erases the Hurricanes’ advantage by cross-checking Teddy Blueger.

After several close calls of hitting posts in his first handful of games with the Pens, Patrick Marleau finally gets his first goal as a member of the team. It’s a nice one too, Conor Sheary hits Marleau (fresh off the bench) with a nice pass and Carolina’s defense is caught flat-footed. Marleau rips a backhand shot that eludes 2019 AHL goalie of the year Alex Nedeljkovic to give the Pens a rare 1-0 lead in a day game!

The good feeling doesn’t last long, as Carolina strikes just 33 seconds later. Morgan Geekie, making his NHL debut, scores a goal on just his third career shift by getting open in front of the net and redirecting in a shot/pass from Jake Gardiner. 1-1.

Pittsburgh gets their first full power play when Trevor van Riemsdyk is forced to hook Jason Zucker to prevent a tap-in goal. The Pens do little with it and then the next shift Teddy Blueger takes a penalty 200 feet from his own net, holding a player in the offensive zone. Pittsburgh kills it.

The penalty-fest continues when Geekie gets called for interference, and then a high-stick gives the Pens 22 seconds of 5v3 time. 21 seconds in, they strike with Evgeni Malkin blasting a shot from range and Patric Hornqvist totally taking away the eyes of the goalie. 2-1 Pens.

Shots are 10 a side in the first. Pens did well at 5v5, but there was lots of special teams play involved.

Carolina regroups and bounces back for the start of the second, outshooting the Pens 5-0 in the early portion of the period in part because of pinning the Jack Johnson – Justin Schultz pair in deep. Tristan Jarry was very sharp and scrambling to keep the puck out of the net.

The undisciplined Canes continue onto the penalty box, Warren Foegele took a tripping call, Pens couldn’t score. Soon after, Vincent Trocheck boards Jared McCann and temporarily knocks him out of the game on a scary hit. But, again, the Pens can’t make them pay.

And because of that, Carolina is able to tie it up. Jaccob Slavin floats a shot from distance that’s not very hard. But somehow Jarry doesn’t pick it up through a little traffic, seemed to have a path to see the puck but it eludes him. 2-2 game.

Slavin from the point
Geekie at the net pic.twitter.com/98VQMfbn8w

Jarry bounced back though, he stops the dangerous Svechnikov who shoots on a 2-on-1 rush to hold the Pens in.

Bryan Rust gets carried away with a free hand grabbing so he goes for holding. The Pens get the best chance though, Evan Rodrigues takes a shot on the rush that hits the post. Rodrigues follows that up, unfortunately, with a holding call of his own later on to give Carolina 20 seconds of a 5v3. Pittsburgh holds on for a bit but Carolina keeps zone possession for a while and scores on the 5v4. Jake Gardiner blasts from the point and Rust fails to block the shot, so it still blows by Jarry’s glove just the same. 3-2 Carolina for their first lead of the day.

Carolina really tipped the ice back in their favor in the second and the Pens’ power play going ice cold didn’t help things.

Early in the period after Murray oh, Jarry can’t cleanly catch a puck it leads to a turnover and Justin Williams misses shooting at an empty net, which is about the first lucky break the Pens catch in a while.

But Williams gets his goal a little later. Another point shot that has given the Pens’ defense and Jarry so much trouble today gets tipped by Williams in front of the net and it slides through the five-hole of Jarry, who himself wasn’t set and was sliding. 4-2 Carolina.

Williams makes it 5-2, the puck somehow bounces to him and he quickly snaps it in the net before anyone realizes it. Cool, cool.

Then, just for fun, Carolina makes it 6-2 with 3:41 left with Geekie scoring again. Justin Schultz’s attempted clear hits Geekie and he’s able to settle the puck and fire it into the net before Jarry can recover.

Morgan Geekie is a mood pic.twitter.com/Xb3vbKZlRp

Poor Evan Rodrigues draws his third penalty of the game by getting high-sticked late in a blowout. Doesn’t matter, the Pens power play does nothing

Little things. Thought Rodrigues was one of the very few good players today, 5 shot attempts, 3 penalties drawn, a blocked shot, takeaway, flurry of activity. But he hit the post while short-handed with the game tied at 2. Carolina made it 3-2 not long after and were off to the races. Seems like the little things like that aren’t breaking the Pens’ way right now.

Power play struggles continue. Again. Pittsburgh had 12 minutes of 5v4 time today. They scored 0 goals (they did score with a Malkin 5v3 goal). They did generate 10 shots and 10 scoring chances and 5 high danger chances, per Natural Stat Trick, at 5v4 but came up empty. That again proved to be a big turning point and missed opportunity in the course of the game.

Struggles everywhere. All the special teams time meant limited 5v5 time, but the Pens’ defense still struggled up and down. Johnson was on ice for two 5v5 goals against in 10:25 of play, with — get this — the blueline’s worse Corsi% on the day at 33.3%. Schultz two GA in 11:45. The Dumoulin/Letang pair were also on ice for two 5v5 goals in 14-15 minutes, with the Pettersson/Marino pair on ice for only one 5v5 goal against. Pittsburgh’s defense is just begging for a refresh after giving up 11 goals in two games this weekend.

Tough times now for the Pens, losers of six of the last eight, including two ugly ones this weekend. In the very short term, they haven’t been getting good goaltending, their defense is mostly bad and the power play can’t score. It’s all adding up to a bunch of losses and now a three game road trip next week.