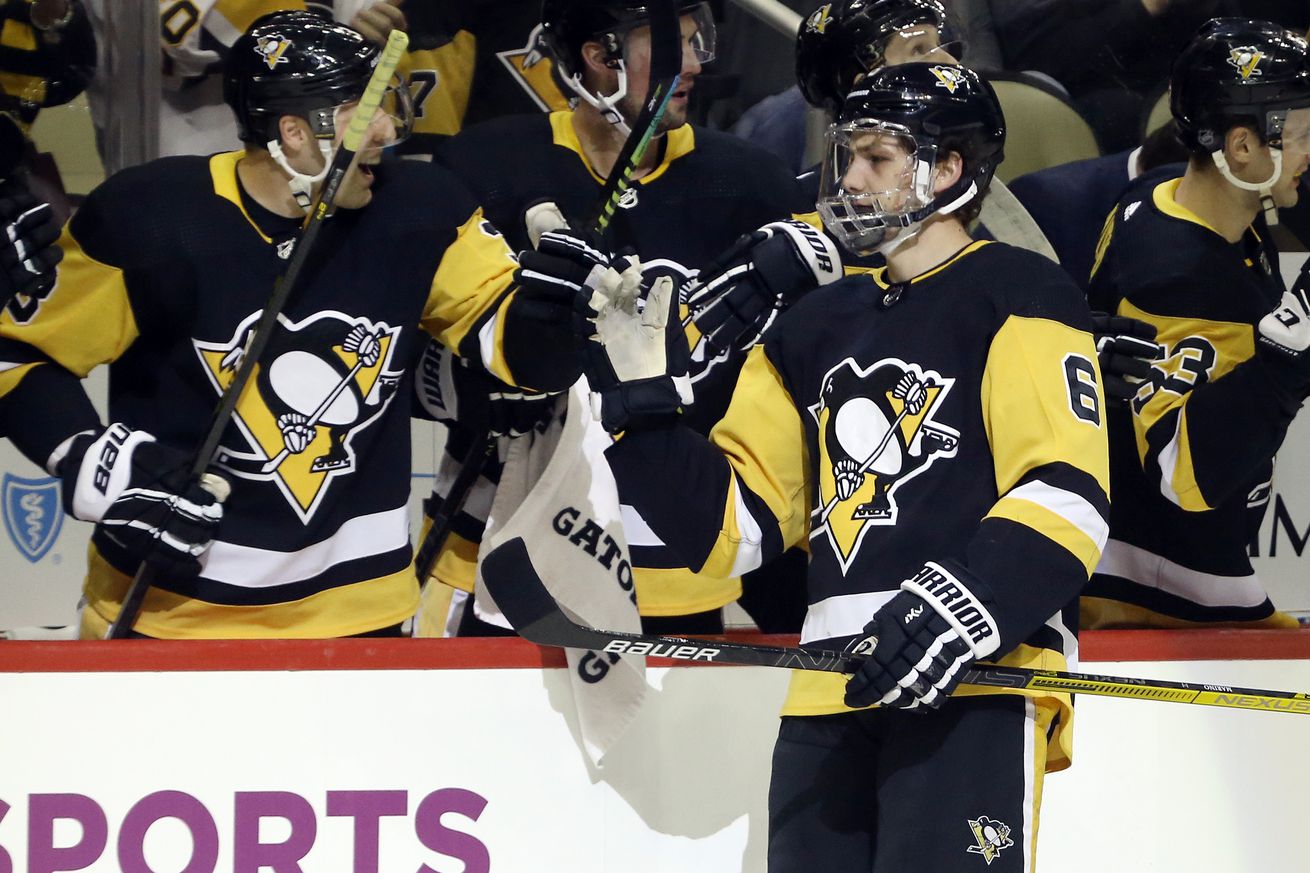 John Marino returned to the lineup and helped the Penguins get back in the win column, while Bryan Rust continued his career year.

It is still probably too early to say the Pittsburgh Penguins are back on track after their six-game losing streak, but they did do exactly what they needed to do this week against the Ottawa Senators and Buffalo Sabres.

Beat two teams they should be expected to beat. Also, beat them convincingly.

It sets the stage for a big weekend against the Washington Capitals and Carolina Hurricanes where they have a chance to gain some ground in the race for the top spot in the Metropolitan Division, as well as distance themselves from the rest of the pack behind them.

Pretty solid spot to be in.

Now, let’s check in with the hot and cold players for this past week.

Jason Zucker — What a pickup he has been. He has three goals and six points this past week and is scoring at close to a point-per-game rate since joining the Penguins. His speed is an asset on the top line, and while he still has the occasional moment where he might defer to Sidney Crosby a little too much, he has been a great fit.

Bryan Rust — He had that brutal turnover on the power play in Buffalo on Thursday, but he snapped out of a little goal funk at the right time to help the Penguins snap their losing streak. He did it with a hat trick, the third of his career, to continue his career year offensively. At this point it looks like he is going to be the team-leader in goals this season, probably scoring close to 35, and that is a developmemt that probably nobody saw happening at the start of the season.

John Marino — He has only been back for two games but you can already see the difference he makes. Heck, you saw the difference he makes when he was not in the lineup, too. He scored a goal in his first shift back on Tuesday night and has been outstanding in every phase of the game in his first two games back. Breaking up odd-man rushes, getting the puck out of the defensive zone and to the forwards, just being in the right place. What a player.

Sidney Crosby — After recording just a single point (a goal) during the six-game losing streak the captain said he needed to do more. You knew he eventually would. Then he did. He had three points against Ottawa then scored a huge goal in Buffalo on Thursday night to take away any momentum the Sabres might have been able to build with their early third period goal. It was a vintage Crosby backhand off the rush that just looks unstoppable when he really gets a hold of it. He also recorded the 800th assist of his career.

Evgeni Malkin — Not sure he played his best hockey these past two games, but six points in a two-game stretch (including a four-point game against Ottawa that was completely overshadowed by the returns of John Marino and Brian Dumoulin, as well as Bryan Rust’s hat trick) is still worth mentioning.

Jared McCann — It seems like I keep mentioning him here, but we are closing in on nearly two months without a goal from him. Even worse, I am starting to notice him less and less. There have also been five games since February 20 where he played 12 minutes or less. I know he was dealing with an injury there for a bit, it’s been a long time since he made a noticeable, tangible impact on a game.

Justin Schultz — He has actually played better over the past couple of games, but for as much as Jack Johnson drives everyone crazy, I think Schultz is player I would bring out of the lineup if it came to it. They are still not getting any meaningful offensive contributions from him, and if he is not producing offensively, there really is not much here to help. In 58 minutes of 5-on-5 ice-time this past week the Penguins were outscored 7-2 with him on the ice.