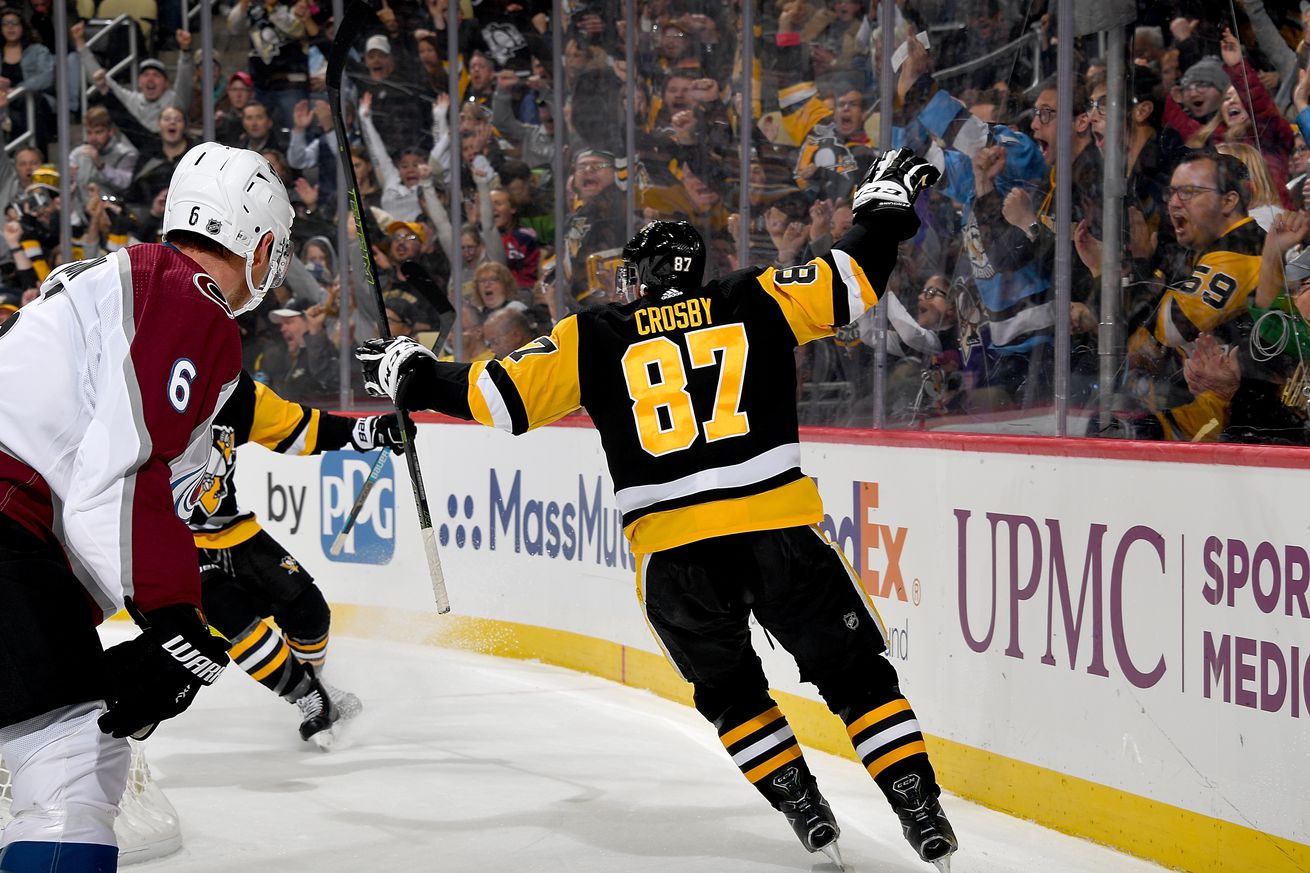 The news stories slowed down some. Let’s revisit Crosby’s goal against the Avs from this time last year. Because why not?

Good morning Pens fans. Since NHL hockey is in hibernation mode usually reserved for the dog days of summer, let’s take a rewind from October 16th last year when Sidney Crosby and Nathan MacKinnon squared off in Pittsburgh in one of the more memorable games from last season with a candidate for best goal of the year for the Penguins. [PensBurgh Recap]

With the league getting a new club beginning next season with Seattle, it’s never too early to talk Expansion Draft! Hooks took a dive down that wormhole yesterday which always seems to spark quite a discussion. [PensBurgh]

Despite the Penguins’ cupboard of prospects currently looking quite barren, Robbie named a few prospects with the potential to make the big leagues next season with Pittsburgh. [PensBurgh]

The link above was a perfect segue for Seth Rorabaugh’s article from Trib Live featuring Jonathan Gruden. He made it perfectly clear that it’s Jonathan Gruden and not that no-talent … clown who became famous and started winning Grammys Super Bowls. Jonathan’s father (John) played 92 games in the NHL. Hopefully Jonathan can make a name for himself and surpass that number with the Penguins. [Trib Live]

Usually this time of year Phil Bourque is busy calling Penguins games on the radio. With the league in the offseason right now, The Old 2-9er was trading one headset for another when he worked the Dunkin Donuts drive-thru window in Avalon on Friday morning. It was all for a good cause as the store will donate 29% of proceeds from the day to the Greater Pittsburgh Community Food Bank. Keep up the great work, Phil! [Trib Live]

Mike Defabo at the PPG was answering questions from readers with the latest PPG Penguins mailbag. The first question was pretty intriguing:

Lisa: Given how there seemed to be a lot of good free agents available this year, probably more so than normal due to the low salary cap, do you think the Pens would have been better off not trading for Kapanen, keeping their high first-round pick and instead getting someone in free agency?

Hindsight is 20/20 of course, but Defabo’s answer was spot on. [Post-Gazette]

The Hockey Writers compiled a list of free agent forwards the Penguins should consider. I’m including it this week just to see what people would think about the Penguins signing his third recommendation. It would be… interesting. [THW}

As the 2010s were beginning, it seemed like the Penguins and Blackhawks were going to be battling it out seemingly year after year for Stanley Cups. That came true as the two teams combined for six out of the last 11 Stanley Cups, but the Penguins shelf life has lasted much longer than Chicago’s. How did that happen? [Blackhawk Up]

Nolan Patrick accepted a one year qualifying offer with the Flyers yesterday. Patrick didn’t play a game last season due to injuries after battling through a migraine disorder for an extended period of time. He appeared to be gearing up for a return before the shutdown in March, but did not play in the playoffs for Philadelphia. Hopefully he can put his injuries behind him and become the player with high expectations after being drafted second overall. [Broad Street Hockey]

Four NHL.com writers gave their opinions on who was the most improved team this offseason. Montreal and Vegas seemed to have taken a big step forward, but they weren’t the only teams bettering themselves for next season. [NHL]

Each year when a team wins the Stanley Cup, others GMs in the NHL take notice of the type of roster that team had and try to duplicate it. This year was no different as many teams seemed to be going after players who make their team “tough to play against” such as the Tampa Bay Lightning team this playoffs. [Yahoo!]

You probably wouldn’t think of Tampa, Florida as a front runner to host a tournament named “The Frozen Four.” But when the NCAA announced that Amalie Arena will be hosting the 2023 Frozen Four, it is the third time Tampa will be hosting the tournament after hosting in 2012 and 2016. Tampa has gone from a headscratcher to a preferred destination to host the NCAA tournament in a relatively short time despite not having a D1 hockey program in the area. [Sports Illustrated]

Pittsburgh will not be a stranger to the Frozen Four as PPG Paints Arena will be hosting a large amount of athletic tournaments in the coming years, including the NCAA Frozen Four in 2021, hosted by Robert Morris University. But that’s not all that will be on the docket, check out the diverse range of sports that will take place at PPG Paints over the next few years. [KDKA]