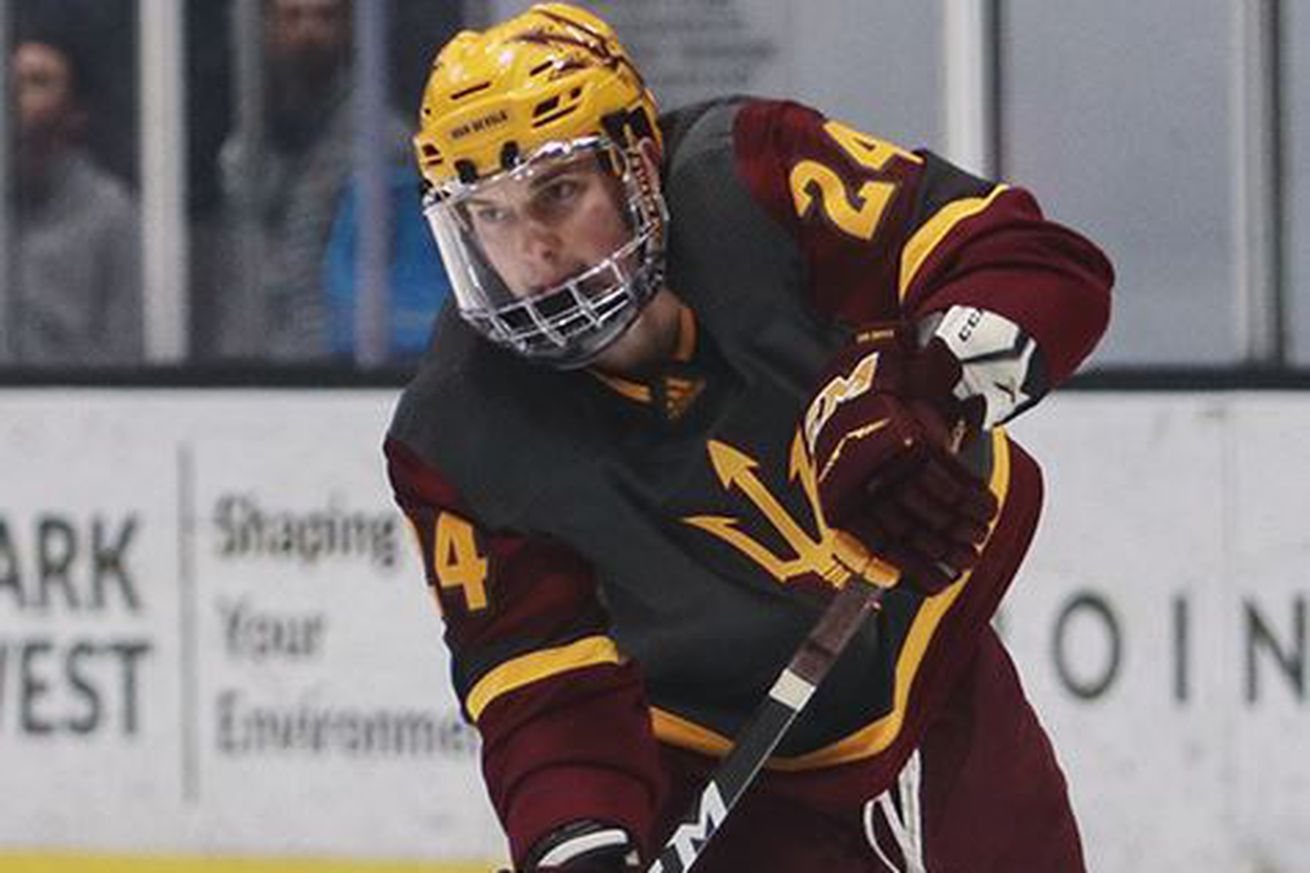 Quite an afternoon for ASU Athletics. Devils overcome a slow start and an early deficit to sweep Brown by a final of 4-3.

Josh Maniscalco put home the OT game-winner. Here was a look at the play: https://t.co/St4AtCI7kw pic.twitter.com/ZuYoxfzj0y

Josh Maniscalco sends a rocket home from the point and @SunDevilHockey wins it, 3-2 in OT. ASU now ties its single-season win total with a 10-4 record.

The Sun Devils battled hard in the series finale against Harvard with a huge boost from the maroon and gold fans. pic.twitter.com/tWKKnAnfeE

Josh Maniscalco’s (@jmani_18) one-timer on the Power Play off an excellent feed from James Sanchez (@KingJames_38 ) for @SunDevilHockey‘s first goal of the game.@DevilsDigest pic.twitter.com/4E0MmmKgvR

And here’s a bonus of Maniscalco scoring a goal during a 2019 Boston Bruins rookie camp that he attended as an undrafted FA invite:

The coronavirus pandemic threw the whole world upside down, and it also likely changed the course of Josh Maniscalco’s career. Maniscalco had made his intentions known in March that he would return to Arizona State for his junior season in 2020-21, after a very successful 2019-20 sophomore campaign that saw him:

But after the pandemic dragged along, Maniscalco re-assessed his path and opted to turn pro now.

“At the end of the day, there’s still uncertainty surrounding what college hockey season looks like for everybody,” ASU head coach Greg Powers said in August shortly after Maniscalco chose to sign with Pittsburgh. “Josh turned down NHL contracts to come back for a normal college hockey season that he was going to be a part of as a captain of our program [in 2020-21] … [But] if you have a max NHL contract, under these circumstances, you gotta go.”

Statepress.com had more on the decision:

“Nobody in the world expected the COVID situation to go on (as long as it did),” Maniscalco said. “For me personally, I just think that now it is time. I just feel that I can’t turn down an opportunity like this given the current situation here at school in regards to the season (being) up in the air.”

Despite having interest from several NHL clubs, Maniscalco chose to sign with the Pittsburgh Penguins, a team that plays just hours away from his hometown of Perkiomenville, Pennsylvania.

As expected, the natural “recruiting” ploy the Penguins have right now is the success of John Marino going from the NCAA and being a somewhat obscure prospect to being an instant NHL regular. This career path and the success of players like Marino was a major factor and drawing point for Maniscalco to choose Pittsburgh.

“The first conversation I had with Pittsburgh after they started to show interest, (Marino) was actually just starting to play games last year,” Maniscalco said. “I was watching him and it was just awesome to see. That’s exactly what you want as a college player, develop in college and hopefully get to step right into the NHL.”

The Pens were thrilled to add Maniscalco.

“Josh is a solid puck-moving, offensive defenseman,” GM Jim Rutherford said in a statement. “He jumps into the rush and plays a style that is complementary to our group. We think highly of his character and are happy to add Josh to the organization.”

Maniscalco’s self-scouting report makes him sound certainly like a complimentary player for the Pens’ system.

“I’m a big believer that being a good skater is the way of the game anymore, so I like to rely on my legs big-time,” Maniscalco said. “I like to jump in the play, that’s for sure. I love the rush of just being up in the play, beating the other team’s forwards up ice and providing that extra offense. I’ve learned the hard way that you’ve got to be able to play defense, too (laughs). So I like call myself a two-way defenseman.”

“He’s a stud,” Powers said early in the 2019-20 season. “We knew what we were getting when we got him. He had a great freshman year, and he has just continued to evolve to the point where now, I think he’s one of the top defenseman in college hockey just as a sophomore.”

“He’s got everything you want,” Powers said. “He’s got poise and he can break it out better than anybody you will see, and now he’s starting to produce offensively.”

In many ways, signing Maniscalco is a direct response into losing Calen Addison in a trade to Minnesota earlier in the year. It refreshes a bit of the prospect pool to give the Pens’ a high-upside puck-rushing right handed defenseman. Addison is younger and has a much bigger pedigree with his success for Team Canada in the WJC’s, but Maniscalco really came into his own last season as one of the best defensemen in the NCAA ranks as only as 20-year old sophomore.

John Marino is and should be the target for any NCAA defender to aspire towards, but Maniscalco doesn’t need to make an immediate impact, nor should he be expected to (Marino had on more year of NCAA and was an older player). Signing a somewhat coveted NCAA player is another good move for the Pens, who basically get a good prospect for the price of his contract. These are the types of moves Pittsburgh badly needs, since they don’t have very many good, high-end prospects — and when they do get those types of players, there is a good chance they’ll get traded for immediate NHL help anyways (as Addison was).

Maniscalco looks to be the ideal modern day defenseman. He has great size, he has showcased well at lower levels, he skates well, he can move the puck and he’s a right handed shot to boost his value all the further.

“I would say, I want to be a pro hockey player,” Maniscalco said. “Now I actually get to say that. It’s honestly surreal.”

Unfortunately the 2020 pandemic has put a brief hold on the start of that professional career, but it won’t be long before Maniscalco is looking to develop into a NHL player.