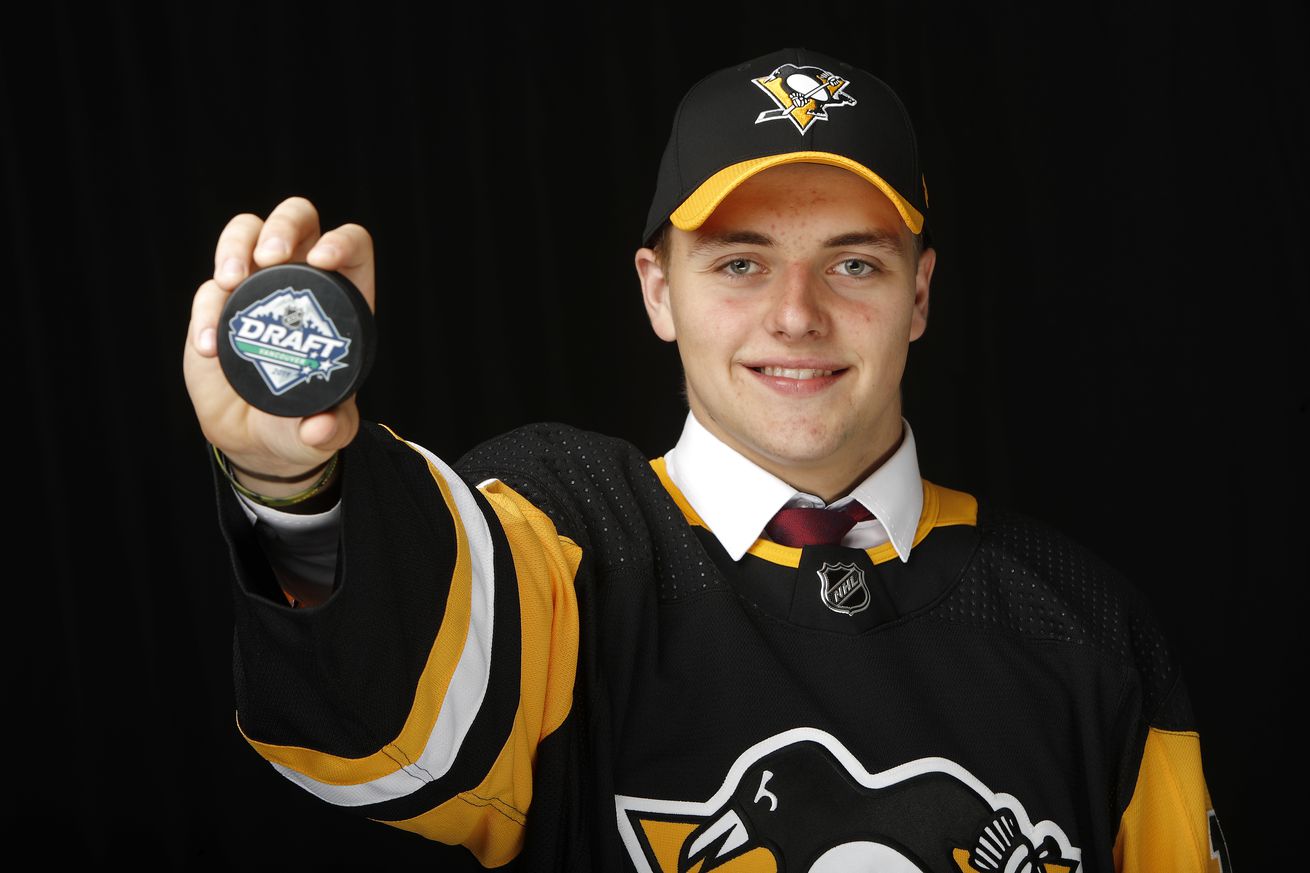 Nathan Legare reacts after being selected 74th overall by the Pittsburgh Penguins during the 2019 NHL Draft. | Photo by Kevin Light/Getty Images

One of the few notable prospects the Penguins took during the 2019 NHL Draft looks to be developing quite well.

A versatile and hard-working winger who blends skill and tenacity, Legare packs a heavy release and uses it without hesitation. Led all QMJHL draft-eligible players in goals with 45 and was second in points with 87. Needs to add quickness to his first few steps, but if he can get to the soft spots, there’s a good chance the puck is going in.

A competitive power forward, he has a quick and powerful stride with great edge work but average speed. He still lacks fluidity in his skating and he needs to improve his agility to keep up with others at the next level. He also needs to work on his stickhandling skills but he is always ready for a rebound in front of the net. He never gives up on the play and puts the effort in everything he does on the ice. Very detailed in that regard. He finishes his checks and is effective in getting in on the forecheck to disrupt breakouts or force turnovers. Sound positioning in the offensive zone, he has a great shot with a lot of power behind it. Isn’t afraid to throw a big hit or crash the net and protects the puck well. Defensively, he backchecks with intensity and has great stick placement and will always show willingness to help his teammates in puck battles. Plays with high-pressure intensity and that style creates a lot of turnovers that his team can capitalize on. Needs to work on some high-end skills, but he plays with heart on his sleeve and character on every shift. He is someone who will get under the skin of his opponents at times, and you can expect him to win most of his puck battles while drawing penalties from time to time. However, his skating skills and work with the puck will need to improve to have a shot to play at the highest level.

If there is a player in this tier of the rankings who has a chance to far outpace our expectations down the line, it might be Legare. There isn’t any one part of his game that makes the careful observer sit up and get excited, but he puts the puck in the net at a stellar clip. The former sixth overall pick of the QMJHL Entry Draft in 2017, he took off in a big way in his draft eligible year, increasing his scoring output from 10 goals as a rookie to a team high 45, narrowly edging out San Jose prospect Ivan Chekhovich and finishing only three goals back of the league lead. A beefy winger, Legare is not the fastest skater, but he is still able to play the game with speed. He keeps his feet moving, takes large strides and changes direction pretty well. His offensive skills project to an above average rate, with solid stickhandling, sharp passing ability and a nice one-timer. For Baie-Comeau, he took it upon himself to be a primary shot generator, with a lot of game practice on both his wrist shot and slap shot. He endears himself to coaches with the way he pressures opponents at both ends as well as how he uses his mature frame to protect the puck and create room for himself down low. It is hard to see his blend of skills settling in above the third line, but it is also hard to see him descending to a level much lower than that.

It seems like since the day he was drafted, everyone could not stop talking about Nathan Legare’s NHL-caliber shot in addition to his impressive offensive instincts.

A good indicator of whether or not a prospect has a shot of making the NHL is by analyzing point totals, and more specifically, points per game.

With 87 points in 68 games during his 2018-19 campaign, Legare finished with a 1.27 PPG. That is a quality mark for the winger while playing in the QMJHL. The more points an offensive-minded player can rack up in the junior leagues and in the AHL, the more likely success will follow him to the bigs.

However, a glance at last year’s point totals tells a bit of a different story. 71 points in 61 games equates to a 1.16 PPG. Some junior league analysts over at DobberProspects believe this drop off could be attributed to Legare playing with a weaker squad when compared to his ‘18-19 totals.

Clare McManus’ Dobber report on Legare also noted that the winger notched 14 power-play goals last year, but may have struggled with his individual defensive play, another factor that may have limited last season’s point totals. Legare’s defensive game has always been a bit of a question mark, even going back to last year’s Top-25 countdown.

Legare is already over point per game for the 2020-21 “Q” season, which is also a positive sign. We’ll be watching to see how Legare finishes out this season, and whether or not the Montreal native gets any sort of invite to Wilkes-Barre/Scranton at some point in the future.