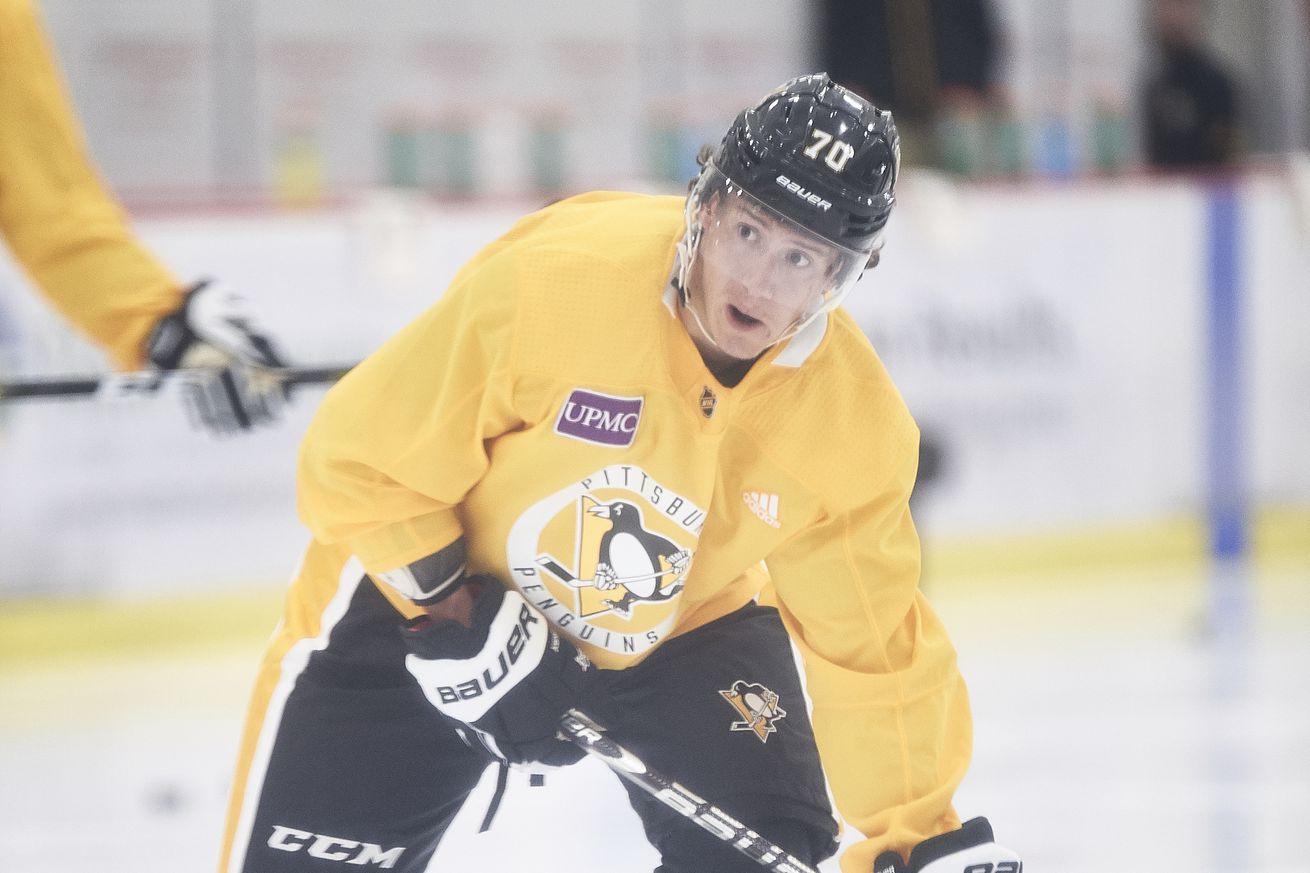 We’re down to single digits in our countdown of the best young players in the Penguins’ system and today undrafted free agent Cam Lee makes his entrance.

There’s not much on the internet, but here’s a still photo of him activating and scoring a goal from in close for Western Michigan:

“Lee has a lot of elements in his game that will translate to the higher levels. He’s very smart, he’s competitive, and he’s quick and agile enough to play at the pro pace. I could see him play NHL games soon.” — Corey Pronman, The Athletic (August, 2020)

“He has always been strong offensively, with a strong shot from the point. Lee understands how to keep his shot low and get it on the net, allowing teammates to get tips and rebounds. He also uses good lateral agility to walk the line and create shooting and passing lanes. Lee has good vision and passing skills. He can quarterback the power play as well as start the transition game. Lee’s strong skating helps him to get up the ice as well as get back defensively.” — Last word on Sports, (March, 2020)

Cam Lee is a smooth-skating defenseman that the Penguins had their eye on for a bit, he participated in Pittsburgh’s summer 2019 prospect camp as an invited undrafted free agent. The Pens and Lee took the relationship to the next level once Western Michigan’s season was over by signing Lee to a two-year entry level contract.

“Cam is a good-skating, offensive-minded defenseman that fits the current style of play in today’s NHL,” said GM Jim Rutherford back in March. “This signing adds more young depth at defense for us. We’re excited to have Cam as a member of the Penguins organization.”

Lee ranks high on this list, because the Pens are fairly enamored and high on his skill set. His NCAA numbers didn’t jump off the page, but he showed an aptitude to move the puck and rack up decent enough assist totals in the last three seasons to suggest he has potential. Lee was also turning it on at the right time — he tied a record with a five assist game in March against Miami (OH) a week before the NCAA season was forced to be cancelled.

Pittsburgh’s strategy to add college level free agents is very pronounced. John Marino was technically a trade-and-signed Edmonton draft pick, but just one year out from UFA he effectively fits in this strategy. Zach Aston-Reese, Casey DeSmith, Brian Gibbons, Jayson Megna, Conor Sheary and Ben Lovejoy are other examples over the years on how the Pens have been very active in recruiting and signing some of the best undrafted collegiate players and given them an opportunity to grow into NHL roles, to varying degrees of success and staying power.

There have also been players along the way like Nate Thompson, Denver Manderson, Eric Hartzell and Ethan Prow that have been signed in similar circumstances that have made little to no NHL impact, but this process was never meant to ensure a sure-fire NHL future so much as to load up on quantity and see what pans out for quality down the line.

But for a team that trades as many draft picks as the Pens do, it’s a good fit for them to be able and add risk-free players that at worst will re-stock their minor league system and potentially grow into something more. It’s a great match for the player, since the opportunity to prove himself is available and the team does have successful history at developing under-the-radar type of players who blossomed too late to be drafted in the NHL.

It might be a while before we see where Lee fits in the big scheme of the system. The Pens have a top LHD prospect in Pierre-Olivier Joseph that as of now is a bit better regarded, but other than that Pittsburgh’s system is very light right now in potential NHL caliber left handed defensemen that have a chance to make NHL games in the near future. Pittsburgh doesn’t have a great need here with Brian Dumoulin, Marcus Pettersson and Michael Matheson as NHL caliber LHD’s all either young and/or signed for a very long time, but no NHL team can have enough depth by way of good defensemen, as the Pens have lived for several seasons with costly injuries.

Lee adds what could be an important piece of the organizational structure, especially if he transitions to the pro game as well as some in the team think that he has the possibility to do so.

As a defenseman if there’s a young player who can skate well, thinks the game at a high level and consistently moves the puck effectively he probably has a chance in today’s game. Lee checks those boxes and has a good bit of experience with four years of NCAA competition and now on loan to a Slovakian team during this delayed season start. He’s a very intriguing player to keep tabs on and see how he adjusts to higher levels of play to see just what he may be able to offer.