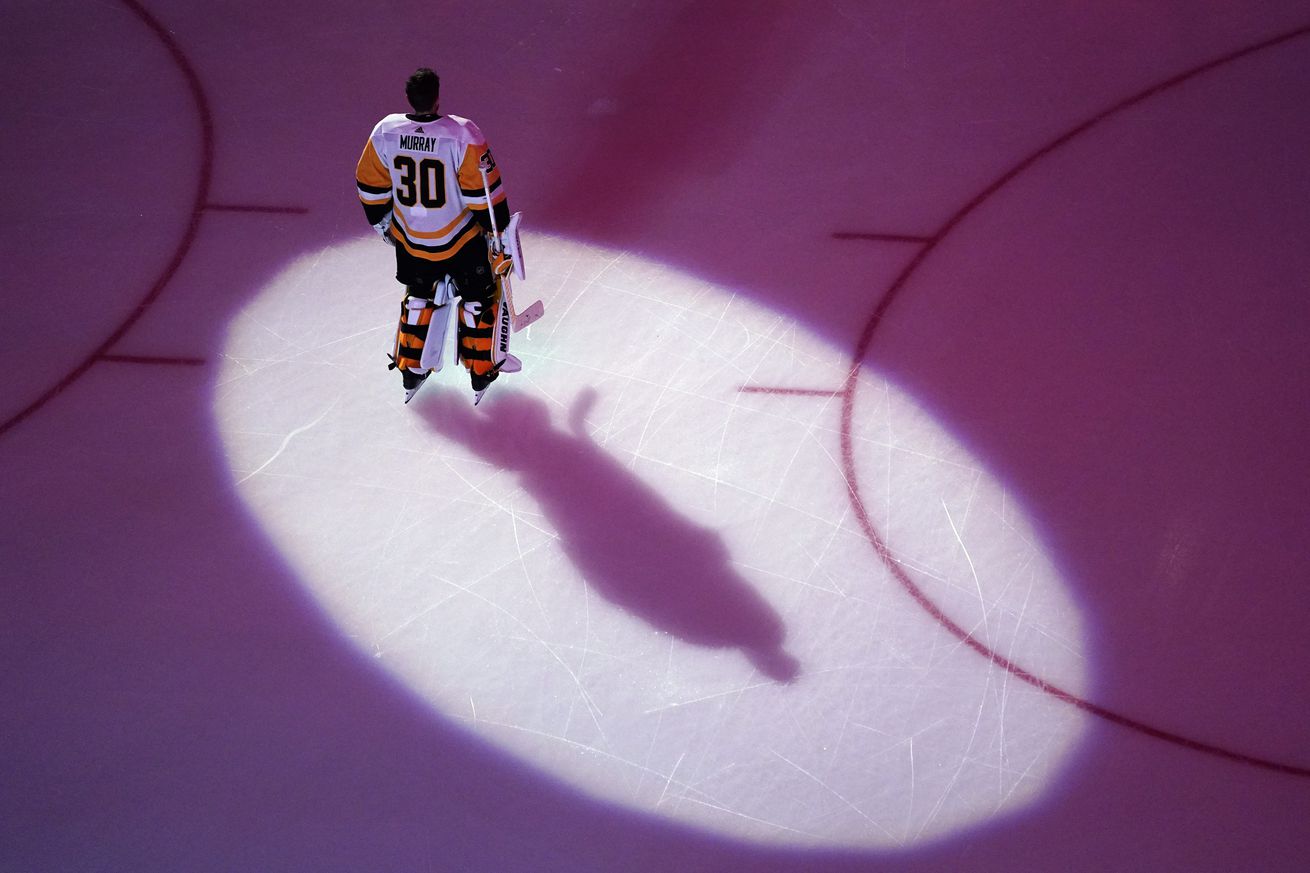 As soon as the dust settled on the Penguins’ season, general manager Jim Rutherford knew he had a log jam coming in net. Both Matt Murray and Tristan Jarry are up for new contracts, and both can utilize arbitration to do so, meaning the economic pressures on a cap-strapped team and a flat salary cap turned the writing on the wall into a loud pitch. Rutherford has managed from the angle of keeping goalie depth as long as he can, but now circumstances are going to dictate a change. We saw that on the TSN list of trade bait, with Murray at the very top.

“It’s going to be difficult to keep both,” Rutherford said on August 11th. “Everybody understands that given the cap.”

Now it’s starting to look like if not the very next trade the Pens make, certainly one in the nar future will involve Murray. From Pierre LeBrun:

In which the Penguins GM says he’s got offers on the table for one of his goalies but not good enough yet to pull the trigger. Give it a listen. https://t.co/KkagI1o1u1

Transcribed above, if you can’t hear the audio Rutherford said:

Watching Washington when they were getting eliminated, to me there were a lot of similarities [to the Penguins]. [The Caps] didn’t have the same juice, they didn’t have the same drive as when they were winnin’, when they were losing that series [to the Islanders]. It reminded me of our team, it looked the same*. And you know you wonder — like guys, and this is not the same for all our guys, because Sid, he’s gonna drive and give it all he’s got right through to win as many Cups as he can. You wonder about guys, like you win two, three Cups, and you have a great legacy already, and you still want to win again but do you have that same drive as when you were trying to win the first one. And the second one and the third one. And I sit there and wonder sometimes.

And with that being said we have a lot of guys who are still really good players and are capable of doing it. But it’s hard to maintain. I mean you can go through every sport and every great athlete and look at how many times they win championships. It’s hard to win one, it’s hard to win multiple. You start gettin’ up in that area tryin’ to win your fourth or fifth Cup and it makes ya wonder.

If you read that again and think about Murray it makes more sense, a player listed as the number one piece of trade bait in the whole league by TSN. Murray couldn’t maintain his hold as the Pens’ starting goalie this season, getting supplanted by Jarry who played better than him. It ended up being the worst season of Murray’s five year NHL career, and a far cry from the first two where he was one of the best goalies in the league and ended the seasons hoisting the Cup.

Talking about complacency among certain individuals after winning some championships has long been a trigger Rutherford has publicly mentioned being concerned about. A lot of what he’s said in LeBrun’s podcast is very similar to the time around a trade in November 2018 to send away locker-room favorite and two-time Cup winner Carl Hagelin in an attempt to shake the team out of a slow start.

As LeBrun teased in his tweet, Rutherford acknowledged he’s received offers for a goalie, and he didn’t say which one, but all the tea leaves in the world are pointing to it being Murray getting shipped out. Pittsburgh doesn’t have an offer worth pulling the trigger on — and goalies are almost always traded for a relatively low price compared to their on-ice value and impact, but that’s just the way it has always been on the trade market.

Usually the NHL is pretty inactive while playoffs are going on, but no one reading this needs a reminder that 2020 is far from a typical year. Pittsburgh has already struck early, trading their first round pick six weeks out from the draft for Kasperi Kapanen, an almost unheard of move in a normal year.

And yet, this isn’t a normal year. Rutherford is fielding calls and wheeling and dealing already to see how the pieces will come together for next season and beyond. At this point that seems to acknowledge what he has been saying for a few weeks now, that the goaltending situation in Pittsburgh is about to change.

Which also seems smart. There are rumors that Arizona might dangle Darcy Kuemper. Minnesota is looking for a change and Devan Dubnyk or Alex Stalock’s status might be up in the air. The free agent market, when it opens, will be flooded with names expected to range from Braden Holtby and Corey Crawford and Robin Lehner to Anton Khudobin and Thomas Greiss.

The Pens under Rutherford don’t stand on ceremony waiting for things to develop. This is a manager who has proven time and again (for better or worse) to move quickly when he feels the need to complete a trade. Given the goalie market, that seems to make logical sense to act early, before teams wait out other options not currently available, when Rutherford already knows he needs to trade a goalie.

Right now, it’s just a matter of waiting (and probably not too long) to figure out what the deal he likes best is to determine which way he is going to go.

*As we pointed out here, recently, discussing how the fortunes of the Capitals and Penguins were basically a mirror image this year losing their first meaningful series, yet their responses to how to move forward with their respective head coaches were different