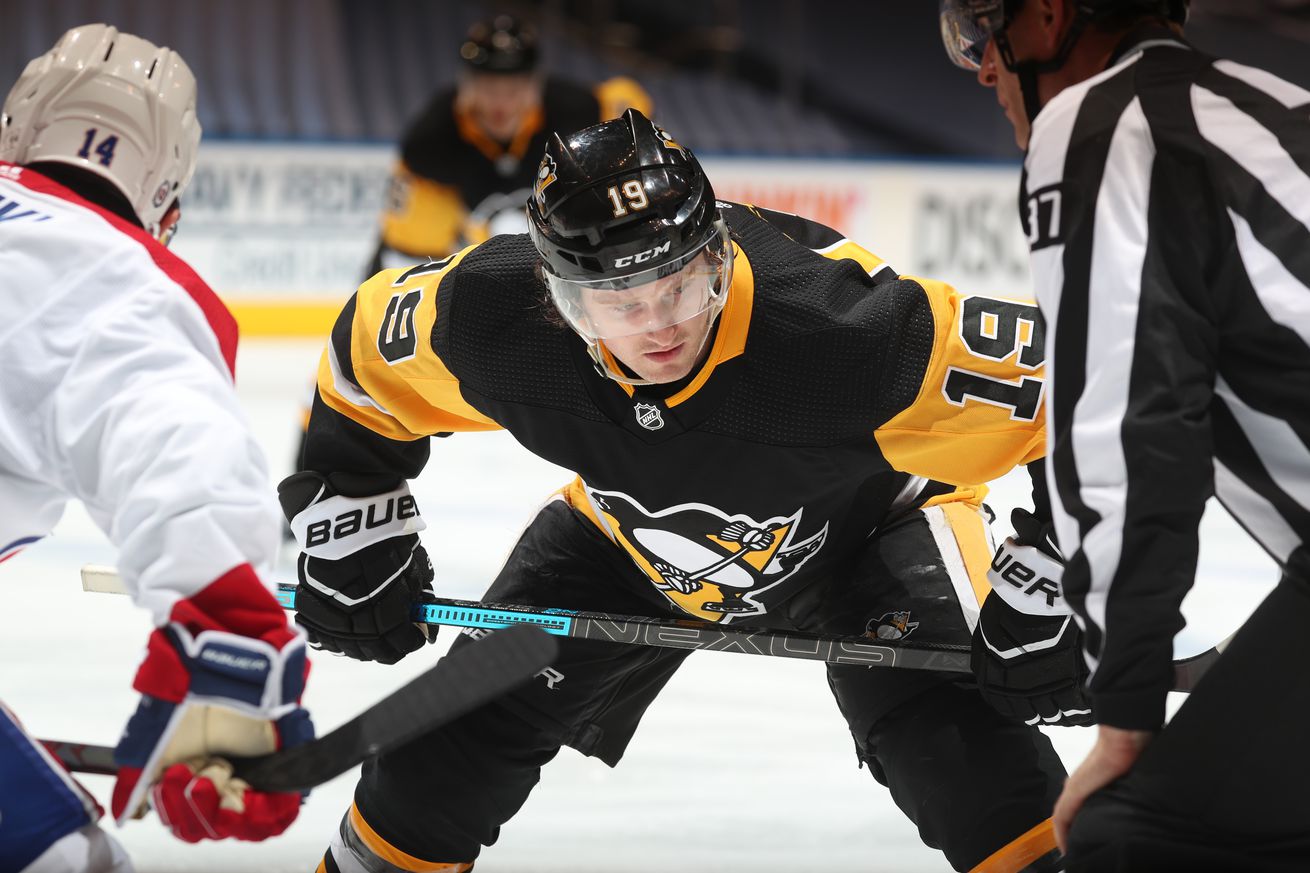 They have spent significant assets with what is currently little to show for it.

The Pittsburgh Penguins traded Nick Bjugstad this past week to the Minnesota Wild for a conditional seventh-round draft pick, while also retaining half of his salary cap hit for the 2020-21 season. It was, in all honesty, an expected move. The Penguins need to shed salary, they need to create some salary cap space, and Bjugstad’s brief time in Pittsburgh just simply did not work out. Mostly due to injuries.

The trade itself is what it is — a salary dump, while Minnesota maybe tries to squeeze whatever quality hockey it can out of a player that is hoping to have a bounce-back season.

What does stand out about this trade to me is that it is another example of the continued collateral damage that has come from the Penguins’ three-year attempt to find a consistent third-line center to replace Nick Bonino.

I want to start by saying this: I do not blame the Penguins for not re-signing Bonino, and I am not going to crush them for it. Finding the salary cap space would have been tight, and there is some certainly some debate as to whether or not he would have been worth it.

But it is still worth acknowledging that the Penguins have not yet replace him on a consistent basis. There is no denying how important that third line was to the Penguins’ two Stanley Cup runs during the 2015-16 and 2016-17 seasons, while each of the Penguins’ past three championship teams all had sensational third lines with a solid-to-great option in the middle of it.

Following Bonino’s free agency departure to Nashville the Penguins opened the 2017-18 season with a revolving door of sub-par options until they made the trade that started their continued chase to find his replacement.

That trade saw them deal Ian Cole, Filip Gustavsson, Ryan Reaves, their 2018 first-round pick, and their 2019 third-round pick away to acquire Derick Brassard (and a couple of spare parts). At the time it SEEMED like a huge move, and one that might be able to power the Penguins to a three-peat. After all, Brassard was not only viewed as a legit third-line center, but also an upgrade over what they had in Bonino.

It did not really work out that way.

I don’t necessarily think that Brassard was bad, or at least not as bad as he was viewed here, but it clearly did not have the desired impact.

So the next season the Penguins traded Brassard, Riley Sheahan, their 2019 second-round pick, and two fourth-round picks to the Florida Panthers for Bjugstad and Jared McCann.

Bjugstad, as we have already established, just simply did not work out as expected, and his $4 million salary was going to be an issue.

McCann on the other hand has been a bit of a mixed bag. He looked really good last year after the trade and got off to a great start this season before going cold in the second half, and then being a complete non-factor in the qualifying round. He started as the third-line center and ended up as a healthy scratch in the decisive Game 3 of the series that saw the Pens lose. McCann drew back into the lineup for Game 4, but only played a total of 10:34, lowest of all Pens players in that game.

He now finds himself as a restricted free agent in line for a pay raise, and would it really be a shock if he ended up being traded somewhere this summer?

In the end, the ultimate price the Penguins have paid in their quest to find a Bonino replacement has been, well … this:

If you are wondering how Hallander and Kapanen fit into that result, the Penguins received a 2018 third-round pick from Ottawa in the original Brassard trade. They traded that pick (and a fifth-round pick) to Nashville for the second-round pick that they used to select Hallander.

I have zero problem with the process or mindset behind trading prospects or draft picks, so I am not going to get angry about that.

I also hate using the term “window” because it is usually followed by a crap hot take, but the Penguins do have a very specific window here with Sidney Crosby and Evgeni Malkin and Kris Letang in which to try and win. Everybody knows things are going to get tough when they retire, and when you have a chance to build a dynasty you have to go for it while you have it. So I have zero problem trading the draft picks (especially the second, third, and fourth round picks because those are basic scratch off lottery tickets) in an effort to add to the team now. There is not a player they were going to select with any of those picks that was going to slow the decline in the post-Crosby/Malkin/Letang era.

So go for it while you can.

The point here, though, is just to illustrate how much trouble they have had finding the right pieces to fill out a third line, especially as it relates to the center position.

A strong third-line is a must if you are going to win a championship or compete for it. We saw it here in Pittsburgh, and I have spent this entire postseason watching Tampa Bay’s third-line of Blake Coleman, Yanni Gourde, and Barclay Goodrow (two thirds of which were acquired at the trade deadline for two first-round picks) completely dominate and help bring them to the front door of the Stanley Cup Final.

I want to believe McCann can be that player, and if he is, his potential is such that he might end up being the best of all the recent options. He is still young-ish, he has a great shot, and he has every tool to be a good, all-around player. But that brings a lot of important questions, ranging from does he remain on the team throughout the offseason, to does he actually pan out the way everyone wants him to pan out?

This has just been a bizarre sequence of events to follow over the past three years.

You can not blame them for letting Bonino go. And again, I am not even sure he would be the answer right now. So I am not lamenting that. It has just been a challenge to find someone to replace him in what is an incredibly important position.