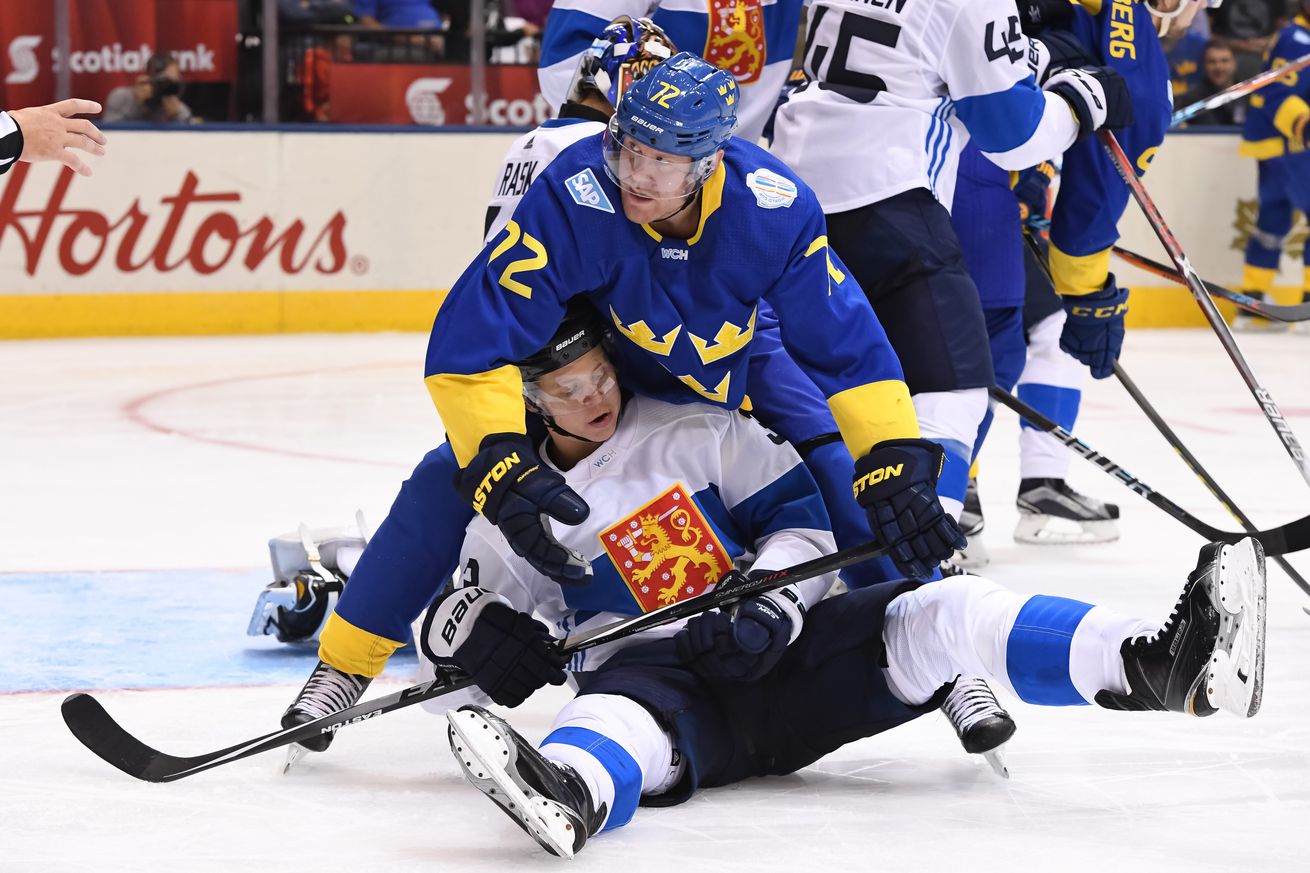 Photo by Minas Panagiotakis/World Cup of Hockey via Getty Images

In part one, we laid out our format and the first team:

We are going to be creating our own World Cup of Hockey type of tournament with players who have played at least a game for the Penguins. Today we’ll move on and name our Team Sweden and Team Finland, two separate teams but condensed into one story today.

The Pens don’t have the greatest Scandinavian history, just 22 Swedish players have played for Pittsburgh over the years, with only eight of those players staying for two full seasons (164+ games) or more worth of career games as a Penguin. Nine of these players have been defensemen, which is proportionately higher than the odds of seeing a Pittsburgh Swedish forward on the ice (though there are two big exceptions to the rule in recent Pens history).

Hedberg is the only Swedish goalie to play for the Penguins so he gets this spot by default, but is also a capable goalie to be “stuck with” not having an option of picking anyone else. Hedberg burst onto the scene in Pittsburgh in 2001

No one was meaner or a big pain in the ass (literally) to play against in his day than Ulf. Team Sweden is going to need that grit and edge and muscle to stand up to some really talented other countries in this fictional tournament and Ulfie is just the guy to anchor this defense.

The great Dick Tarnstrom is the famous answer to the trivia question which player not named Sidney Crosby or Evgeni Malkin last led the Pens in point scoring for a season (Tarnstrom scored 52 points in 80 games for the woeful 2003-04 Pens). And he’ll join this team on his off-hand to play defense for the Swedes. If Tarnstrom was about 10 years younger and joined a different version of the NHL for his hey-day he might well have had a longer and more illustrious career. As a smooth-skating puck moving defenseman he definitely would have fit in a lot better in a later evolution of the sport.

Ahh, the ultimate “one who got away”. For the Pens it was the hall-of-fame Naslund, who they traded for a rugged, big, gritty forward without much of a future (and a bad car accident didn’t hurt). Naslund scored 52 points in 66 games with Pittsburgh in 1995-96, they knew he was good, but he was also a redundant piece on a team over-stocked with skilled wingers. (But I mean, if they knew he was a HOF caliber player, in hindsight maybe trade a different winger..)

Naslund is a no-brainer to include here with a 869 point career in 1,117 total NHL games, the bulk of which came for Vancouver. But in this tournament he’ll get to fictionally reunite with the team that drafted him and try to boost his country.

Sundqvist benefits from positional usage to make this team. Tomas Sandstrom was no doubt a better player, but we needed a center for this Penguin Team Sweden. Sundqvist is almost the only option here, so in he goes. He’s got size and has scored 14 and 12 goals for St. Louis over the last two NHL seasons, so he’ll provide a modest bit of scoring touch.

Ahh, talking and thinking about Patric Hornqvist again, it’s like nothing has to change. Who can’t appreciate and admire all the energy and passion Hornqvist will bring to the ice. He would need to be in his finest form to help this team.

The Pens don’t have a very proud Finnish tradition. In franchise history only 15 Finns have suited up for the Penguins, only one of which played more than 200 career games with the Pens (Olli Maatta’s 362) and none of which have even scored 30 total goals for Pittsburgh. It’s a great hockey country, but just one that Pittsburgh has never really tapped into for one reason or another. As such, Team Finland is going to be facing an uphill battle in this fictional competition, but they’ll no doubt aggressively pursue the game with the famous Finnish determination.

Niemi is the only Finnish goalie in Pens’ history, and unlike Hedberg for the Swedes, well, good luck to the Finns. An important note is that we’re just considering the player in general, and not necessarily saying Niemi would play to the 0-3-0. .797 save%, 7.49 GAA abomination that he displayed in his very brief stint as a Penguin. Niemi’s career was a lot better than that (would be hard to be worse!) and so it’s tough but for the actual games he will be playing in better form than what he showed in Pittsburgh.

The Pens’ longest serving and highest-scoring Finn ever, Maatta is of course well-known and remembered for his flaws and short-comings almost as much as his steady play. Which is a shame, since Maatta is (or was) a perfectly capable second pair defender when given a strong partner. I’m not so sure that will be the case here..

Ville Siren played five NHL seasons from 1985-1990, including three and the start of a fourth with the Pens from 1985-88 before being traded to Minnesota. Siren scored 82 total points in 290 career NHL games, including 56 point with the Pens in 199 games. At 6’2 he had some good size but beyond that I can’t say I know too much about him. His hockey-reference similarity scores like such contemporaries as Brett Lebda, Kevan Miller and Shane O’Brien.

In many ways, I think Nieminen is about the perfect prototypical Finnish forward. Extremely hard-working, gritty, a pain to play against, good two-way. He constantly ran his mouth and often annoyed and irritated opponents. He was a colorful players, who only played 88 total games with the Pens from 2002-03, he had an off-season mishap where he “needed 70 stitches in his arms, legs and face after he fell through the glass door of a sauna”. At his peak, like the 2001 Stanley Cup winner with Colorado he was a very tough player to deal with all over the ice.

A popular player with a lot of positional flexibility, Jokinen will help the Finns up the middle as a center option on this team. Legendary for his smooth hands, and slick dangles, Jokinen is one of the NHL’s best all-time shootout players with a wide variety of shooting options.

This Finnish team doesn’t have a ton of skill, but Jokinen would be the go-to guy to bring that to the table for them.

Another exceptionally “yappy” player, Jarkko Ruutu never met a player he didn’t want to trash talk and/or run over on the ice. And while the stereotype about European players and avoiding fights, Ruutu had 37 fights on his hockey fights card, including not backing down even against players like Milan Lucic. Ruutu played two seasons with the Pens from 2006-08, scoring 16 points in each of his two seasons. Overall he appeared in 658 career NHL games.

Overall, I think I have the Swedes and Finns as about the sixth and seventh ranked teams for this exercise (out of eight). It’s sort of surprising that these countries have produced so many impact players in the NHL, especially over the past 20-30 years, but so few have been on the Pens.