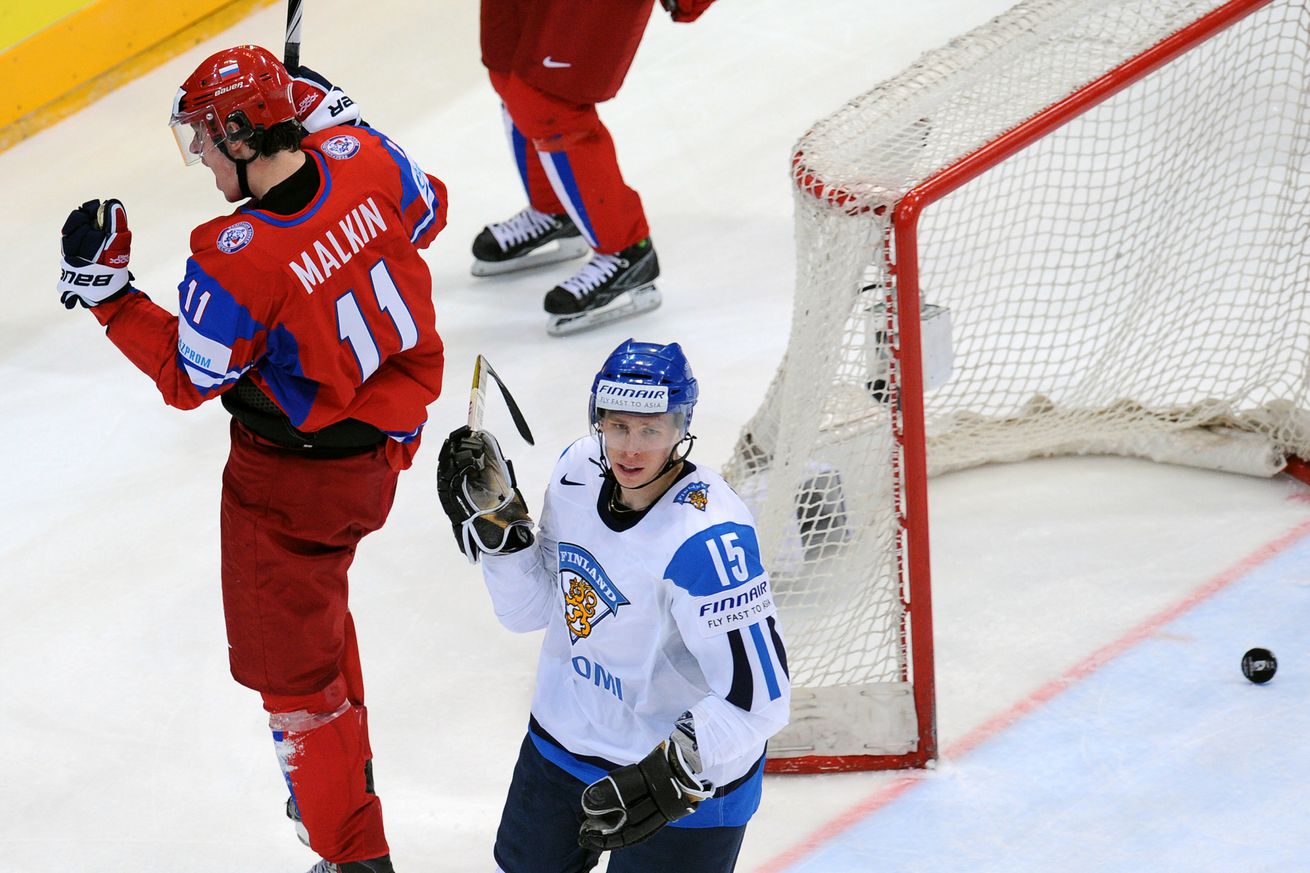 Today our sixth team out of the eight comes with a certain flair and style all of their own, it’s the Russian contingent joining the party. Believe it or not, only 11 Russians have ever played for the Pens, but what they lack in numbers they sure do make up for in quality. Let’s meet them!

Also known as the only Russian goalie to ever play for the Penguins, and only for 35 minutes, but what a memorable game it was. Pechurskiy was drafted in the 5th round of the 2008 draft as a native of Magnitogorsk (a city made famous for Pens’ fans of course by a guy who wears No. 71). Pechurskiy was playing in 2009-10 for the Tri-City Americans of the WHL. The Penguins were on a west coast swing and suffered a few goalie injuries, requiring the ever-rare emergency call-up from the junior ranks. The plan was for John Curry to play the whole game, but just 3:56 into the second period Curry gave up his third goal of the period to put the Pens in a 5-1 hole…So, um, why not take a 19 year old kid who has never played anywhere close to the NHL level and throw him straight into the fire?

It seems a bit harsh now, but it was a message to the team to wake up. It worked. The Pens only allowed 13 more shots for the rest of the game and Pechurskiy made several big saves. he gave up one goal, the team didn’t exactly rally and lost 6-2, but it carved out a unique little niche in franchise history.

Unfortunately, that would be it for Pechurskiy. He didn’t do much in the WHL level and was back in the KHL with Magnitogorsk by the start of the 2011-12 season, where he stayed in the KHL until the 2016-17 team. Hopefully Pechurskiy and his Magnitogorsk magic is ready for this tournament.

I’ve revised an initial ruling about Darius Kasparaitis (a Lithuanian who played on several Russian teams but also did skate with the Lithuanian national team at the tail end of his career), and that’s just as well, because Sergei Gonchar is a better option for the LHD anyways. We’ll get Kaspar for our “Team World” and that should work for everyone.

Gonchar played with the Pens from 2005-10 and was a force. Gonch finished 4th in Norris voting in 2007-08 with Pittsburgh on a 65 point season, coming off a 67 points season in 2006-07. He was an elite puck moving defenseman with excellent playmaking abilities whether it was stretch passes from his own end, or operating as a very, very good power play quarterback walking the blueline for a better angle to fire the puck or find a forward with a pass.

At 6’2, 210, I always thought Gonchar was a better in-zone defender than he was ever given credit for, especially since at his best he was playing 25+ minutes a night against top competition. He had some bobbles and physical miscues for turnovers, but that’s a price to live with for having a very gifted player who always did a lot more good than harm with the puck on his stick.

Hall of famer Sergei Zubov is a legend. There’s stories about him ripping darts in the room during intermissions, certainly a practice that would never happen today. But just all around, Zubov was a star (and, well a Star) over his career with 619 points in 1,068 games. Only one year was spent in Pittsburgh — there’s a long-standing though unconfirmed rumor that Mario Lemieux just didn’t feel Zubov meshed with him and wasn’t a fan of Zubov’s passing and decisions, but nevertheless Zubov was one of the top puck movers and offensive minded players of his age.

Mainly a RW, but with capabilities on both sides, it’s a shame Morozov chose not to come back to Pittsburgh after the 2004-05 lockout. Morozov, the Pens’ first round pick in 1995, grew into his own in the NHL from 1997-2001 but really took off after that. From 2001-04 Morozov scored 125 points in 174 games, including 50 points in 75 games for the woeful 2003-04 Pens that led all forwards. Morozov wasn’t a line-driver, but had good offensive instincts, a nice shot, and was a good playmaker.

Morozov would stay with the KHL and become one of the highest scorers in league history there, and eventually now the league president. Which is hard to imagine for the player once (somewhat derisively) nicknamed “Angelfaced Al” at the beginning of his career. He only stayed in the NHL until age 27, it would have been fun to see what happened with him with Sidney Crosby and Evgeni Malkin, but then again…

One of the most electric players in hockey history, Evgeni Malkin has long been a contradiction in many ways in the sport. He’s tall, yet wiry. Big, but still explosive. Strong on the puck, but with hands and skill that belie a frenetic pace from his legs. An incredibly coordinated center who has the killer instinct and shooting ability to score 50 goals in a season. And also still with the playmaking tendencies to be capable of recording 78 assists in a different season. He’s jovial, kindhearted, charitable with a great sense of humor and with a joie de vivre — yet also is known by even his teammates as “The Bully” when he flips the switch in practice, let alone a game against opponents.

Malkin is a two-time NHL scoring champion. An MVP. A Conn Smythe winner. A three-time Stanley Cup champion. Yet he’s almost always been in the shadows; be it as a No. 2 center on his own team behind Sidney Crosby or for his country and his draft year next to Alex Ovechkin. Though he clearly is one of the best players of all time — with a 1.19 career points/game that ranks tied-12th all-time in NHL history — Malkin was inexplicably snubbed from the NHL 100 year anniversary team.

He is seemingly a simple and straight-forward person. But he also has many layers, a boyish sense of humor and wonderment filtered through learning a new language in a new land. He is, simply, one of the most breath-taking and talented players the sport has ever known. He is Evgeni Malkin. He is score.

Many a former player have instantly said when asked that Alexei Kovalev was the most talented player they ever played with, without thinking twice. And that even includes teammates of (admittedly late age) Mario Lemieux and also Jaromir Jagr.

Kovalev’s skill level really couldn’t be denied, his issue always seemed to be more about dialing in and focusing in and setting out to maximize his gifts and ability. He used a very, very small stick. It allowed him to stick-handle and control the puck as well as any player ever had, especially in tight windows. He could fire the puck with laser-like precision to pick corners of the net, and amaze teammates with pinging the post whenever and wherever he wanted in practice. Kovalev wasn’t always a coach’s favorite (looking at you, Mike Keenan) but the talent level just couldn’t be denied.

Seriously, just watch this video, Kovalev was an absolute magician on the ice. A maestro with a hockey stick in his hands.

I don’t think anyone’s ever really had silky hands like that. And no one has ever made moonwalking on the ice look so cool.

What to make of our comrades? Gonch-Zubov-Malkin-Kovalev add incredible skill, yet they don’t have a very tested or capable goalie too. Yet, depth doesn’t really matter, only sheer talent does for this tournament. The Russians aren’t lacking in that category, which will certainly make them a tough opponent in our Penguins’ World Cup of Hockey.