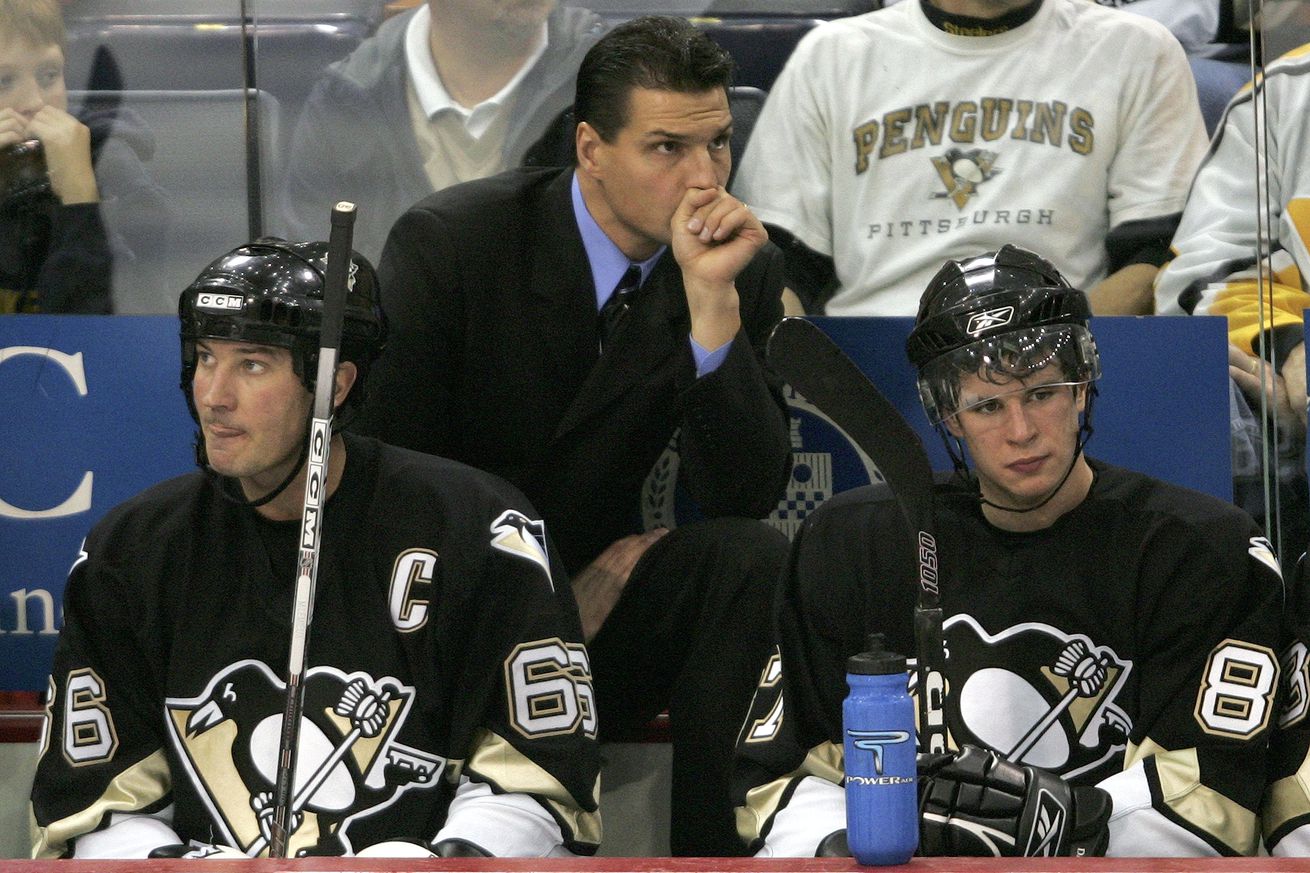 Straight outta the booth, to behind the bench. Sidney Crosby’s first NHL coach. And Edzo also coached his boss…

We keep the walk down memory lane going on Pensburgh today when we rewind to June of 2003 when the Penguins moved Eddie Olczyk from up in the booth to behind the bench. Without any coaching experience and after only retiring from the NHL a few years before. Olczyk just so happened to be coaching his boss and owner of the team, Mario Lemieux. And just to make his tenure completely unforgettable, despite trying to considering how awful the team was, Edzo managed to survive the lockout and had the unbelievable job of molding Sidney Crosby to the NHL.

It was quite a ride.

It was quite a time as a Penguins fan. Lots of uncertainty surrounding the team then. However, the Penguins coaching carousel went from Olyczk to Michel Therrien, who was instrumental to the Penguins ascension to an elite Stanley Cup contender even to this day.

Olczyk wasn’t a good coach. But nobody really expected him to be and he may have even overachieved with the talent he had in front of him.

The 2002-03 Penguins was one of the last remotely enjoyable seasons as a Penguins before years of darkness. That team only won 27 games that year but still had an entertaining roster highlighted by Mario Lemieux, Alexei Kovalev and Martin Straka,

Head coach Rick Kehoe resigned after that season an on June 10, 2003, Eddie Olczyk was hired from calling the game on TV to calling the shots behind the bench when the Penguins signed him as head coach.

It didn’t go well. The team started the season 11–42–5–4 (W-L-T-OTL) and Dick Tarnstrom led the team in points with 52 points, the last player not named Evgeni or Sidney to claim that distinction.

The Penguins gave up the most goals in the NHL with 303, which was 46 more than the next closest team. That team may have been the worst special teams unit in a long time in Pittsburgh, allowing 84 power-play goals and also 15 more short-handed goals.

The offense was obsolete, only totaling 190 goals. That made it a -113 goal difference. The team did finish strong, going 12–5–3 down the stretch which likely saved Olczyk his job as the league went dormant for the 2004-05 lockout.

It was all worth it, however, as the Penguins landed possibly the greatest 2nd overall pick with Geno Malkin in 2004. The Penguins hit the jackpot again the next season landing Sidney Crosby to go along with Marc-Andre Fleury in 2003 and the new generation was born under Eddie Olczyk’s watch. Mercifully.

Olczyk managed to survive the lockout, but the Penguins finally moved on from the Edzo Experiment on December 15, 2005 and replaced him with Michel Therrien. The 2005-06 season was the last season the Penguins would miss the playoffs until… 2020?

So while it wasn’t the best of times, it turns out it wasn’t the worst of times despite feeling like it then. Olczyk was hired to be fired. And that firing turned out to be just at the right time as Therrien would take a team that allowed 300 goals in consecutive seasons to the Stanley Cup Final against Detroit in only three years. Pittsburgh hasn’t looked back yet and Olczyk was fortunate enough to call some of those games once again with NBC.

Olczyk certainly played a big part with the Penguins franchise after playing for several seasons as a player and coaching several more. He was honored by the team many times since retiring as a player in 2000 and is still liked by the majority of Penguins fans.

It’s such a shame that PensBurgh wasn’t around back in those days. Looking back at all the doom and gloom and what it turned into would be quite an interesting turn of events for the Penguins franchise that I wish was chronicled.