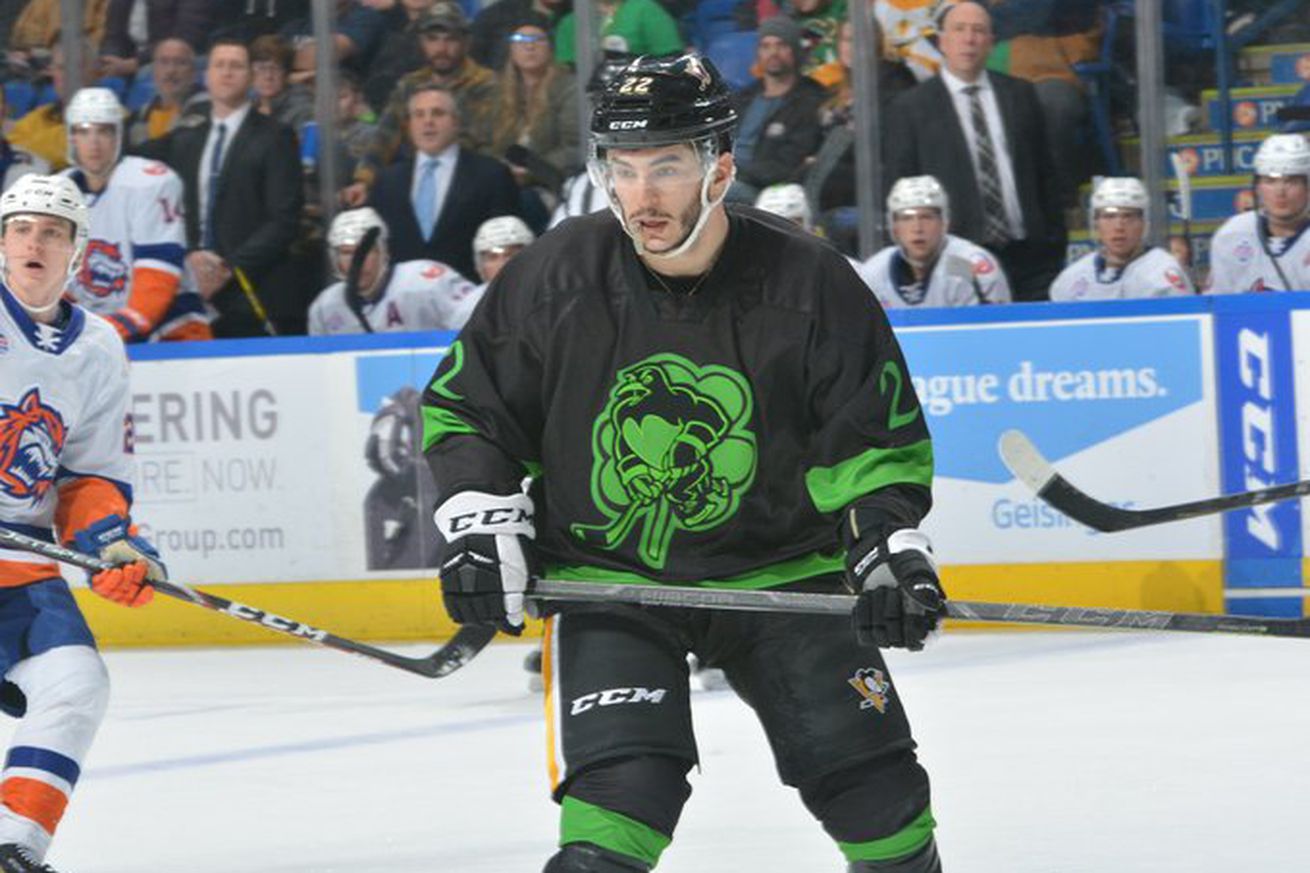 WBS managed to stop their losing streak at 5 this weekend, but they still far further and further behind the playoff line as the injury bug spreads to the farm team as well.

One can certainly argue that one of the primary reasons the WBS Penguins have been struggling so much this season is the seemingly endless string of injuries that have struck the organization all season. It was injuries back in December that eventually led to the short-term recall of Stefan Noesen (along with his torrid start for WBS), and the organization lost Noesen on waivers that month. Same thing for Andrew Agozzino, who rode the recall line between WBS and Pittsburgh several times this season before finally being plucked away on trade deadline day. WBS has also lost Kevin Czuczman, Zach Trotman, Sam Lafferty, and Anthony Angello to injury-related recalls over the course of the season, with Angello himself injured recently.

This past week, the injury bug hit WBS directly, as it was revealed on Thursday that Riley Barber, just acquired in a trade from Laval, would be out six weeks with an injury. Barber scored two goals and three assists in his six games, but that’s a substantial loss, having sent two forwards to Laval for two others, then to have one of the forwards suffer a long-term injury.

But the games wait for no one, and WBS faced three more in 48 hours this weekend as they tried desperately to make up ground in the Atlantic Division.

Don’t let the final score line fool you. The opener of the weekend for WBS was not as close as 6-4 might indicate.

Binghamton opened the scoring at 13:20 of the first through Jesper Boqvist’s sixth goal of the season, a goal which was matched by Adam Johnson’s 10th tally of the year at 18:58 of the first to end the first period 1-1 despite the Devils owning a 14-5 shot advantage.

Kevin Roy attempted to bring some hope for the Penguins with his 12th goal of the season at 9:31 of the third, but it only took 24 seconds for Ryan Schmelzer to restore the three goal lead. Nathan Bastian scored shorthanded at 15:10 to make it 6-2, which would have been a more deserving final to how this game went if not for Jordy Bellerive’s pair of power play goals in the final minutes to bring the final to 6-4.

Final shot advantage for Binghamton was 43-21, leading to a very busy (yet losing) night for Casey DeSmith in goal, who stopped 37 of the 43 shots he faced. For the Devils, starting goaltender Gilles Senn stopped 17 of 21 shots…a performance that on most nights might get him the hook, but on this night got him the victory.

The Devils swept the stars of the game honors on the night with Kuokkanen (1G+1A), Schmelzer (1G+2A), and Boqvist (2G) taking the honors.

Here’s a look at the #WBSPens line combos, defensive pairings and goaltenders tonight against the @TheSoundTigers pic.twitter.com/5w471Q8V7W

With the Penguins on the road this upcoming weekend, they held their annual St. Patrick’s Day celebration on Saturday, bringing Bridgeport to town.

As it usually happens with St. Patrick’s Day, strange and violent things tend to happen (remember the St. Patrick’s Day Massacre?). Saturday was no different, as 11 seconds after the opening face-off, Jamie Devane and Cedric Lacroix engaged in a brawl that left a very significant amount of blood on the ice.

So much so, in fact, that the teams were sent to their locker rooms and the Zamboni machines had to do a full cut and resurfacing of the ice just to clean it all up. I’ve never seen that in 21 years of coming to these games.

Over 25 minutes after the fight, the game resumed, and for a change it was WBS’s night. Kevin Roy started the party at 5:50 of the first period with his 12th goal of the season, a deflection off a David Warsofsky shot.

The Penguins expanded their advantage in the second, as Jordy Bellerive scored his third power play goal in two games off a Zach Trotman assist at 6:49 of the second.

Not to be outdone, Jan Drozg, promoted from Wheeling earlier in the week in the wake of the Barber news, scored also on a power play.

Bridgeport’s Oliver Wahlstrom broke Dustin Tokarski’s shutout bid at 12:03 of the second with his own power play goal, his 10th of the season, but that goal didn’t slow down WBS on this night. The aforementioned Trotman, who was also the subject of a very slick bobblehead giveaway, restored the three-goal lead with his fourth of the season at 15:34.

For Bridgeport, starting goaltender Jakub Skarek stopped 28 of 32 shots in the losing effort, while Tokarski stopped 20 of 22 shots and got himself an assist as well, tallying on Berger’s empty-netter. Drozg (1G), Bellerive (1G+1A), and Trotman (1G+1A) were named stars of the game.

VIDEO HIGHLIGHTS – A raucous crowd was treated to flying fists and full nets, as the #WBSPens downed @TheSoundTigers 5-2 on the team’s annual St. Patrick’s Celebration. pic.twitter.com/AbPP1dnfXm

The Penguins brought the exact same lineup out for their rematch against Binghamton as the one which broke the losing streak, except for changing out Tokarski for DeSmith. Unfortunately, Binghamton also changed up their goalies, and waiting in the wings was none other than Zane McIntyre, long a thorn in WBS sides.

He was a thorn again on Tux’s birthday celebration, stopping all 27 shots he faced for his second shutout of the season, both with Binghamton after being traded to the New Jersey Devils organization by Vancouver in exchange for Louis Domingue. Figure that out…in 24 games for Utica this season, McIntyre posted a 11-10-2 record, a GAA of 3.16, and a save percentage of .894. Vancouver ships him off to New Jersey, he ends up in Binghamton, and in just three appearances, he has two shutouts.

Jesper Boqvist opened the scoring at 8:17 of the second, Brett Seney threw down a dagger shot just 12 seconds into the third for his 19th goal of the season to make it 2-0, and Brandon Baddock hit an empty net late to give Binghamton their second win over WBS on the weekend.

While the shot advantage wasn’t as blatant as Friday (only 29-27 to Binghamton), the goalies were the difference. DeSmith stopped only 26 of the 28 shots he faced. Stars of the game were all Devils, as Seen, Boqvist, and McIntyre swept the honors.

Atlantic Division standings after the games of March 8, sorted by points:

It’s going to be quite the race to the finish between Hershey and Providence, I think. Hershey had itself a very good weekend, with two wins and a shootout loss, but they still lost one point of standings lead over Providence as the Bruins swept their weekend to run their winning streak to 11 games.

Hartford is dropping back towards the playoff line, getting no points from their three games, while Charlotte only got one point from their pair of games, an overtime loss to Utica on Saturday. Springfield, the future new affiliate of the St. Louis Blues, closed to within four of the Checkers with a 1-1-1 week.

WBS ended up closing to within 5 of the line, but notice that Charlotte has games in hand over both the Thunderbirds and the Penguins. It’s two extra games over Springfield and three over WBS. So it’s still quite the climb for both teams if they want to challenge Charlotte for the playoffs.

Going into Sunday’s games, WBS’s magic number to clinch the playoffs dropped to 40. The loss on Sunday won’t change that, as Charlotte was idle.

As if to emphasize the point I made above about injuries, let’s look at the goal leaders for WBS on the season.

The goal scoring leader on the team is now, once again, Kevin Roy, with 13 this season for Springfield and WBS to go with 21 assists for 34 points. Jordy Bellerive’s trifecta of power play goals brought him up to 12 on the season, now second on the team; Bellerive also has 10 assists for 22 points in his rookie season. Adam Johnson is now up to double digits in goals with 10, along with 23 assists. The same point total for captain David Warsofsky.

If nothing else, the special teams for WBS have shown significant improvement as of late. The power play tallied four goals this weekend in 14 chances to bring their conversion percentage up to 18.6% (44 goals in 237 chances), good for 13th in the AHL and second in the Atlantic. The penalty kill, 46 out of 50 in the month of February alone, allowed two goals against in 11 chances to finish the week at 42 goals allowed in 245 chances for a kill rate of 82.9%, unchanged from last week, tied for 11th in the AHL, and fifth in the Atlantic.

It’s starting to slip away for the Penguins, who are 2-6 since Kevin Czuczman’s postgame declaration on February 21 that the Penguins were a playoff team. Only 14 games to go.