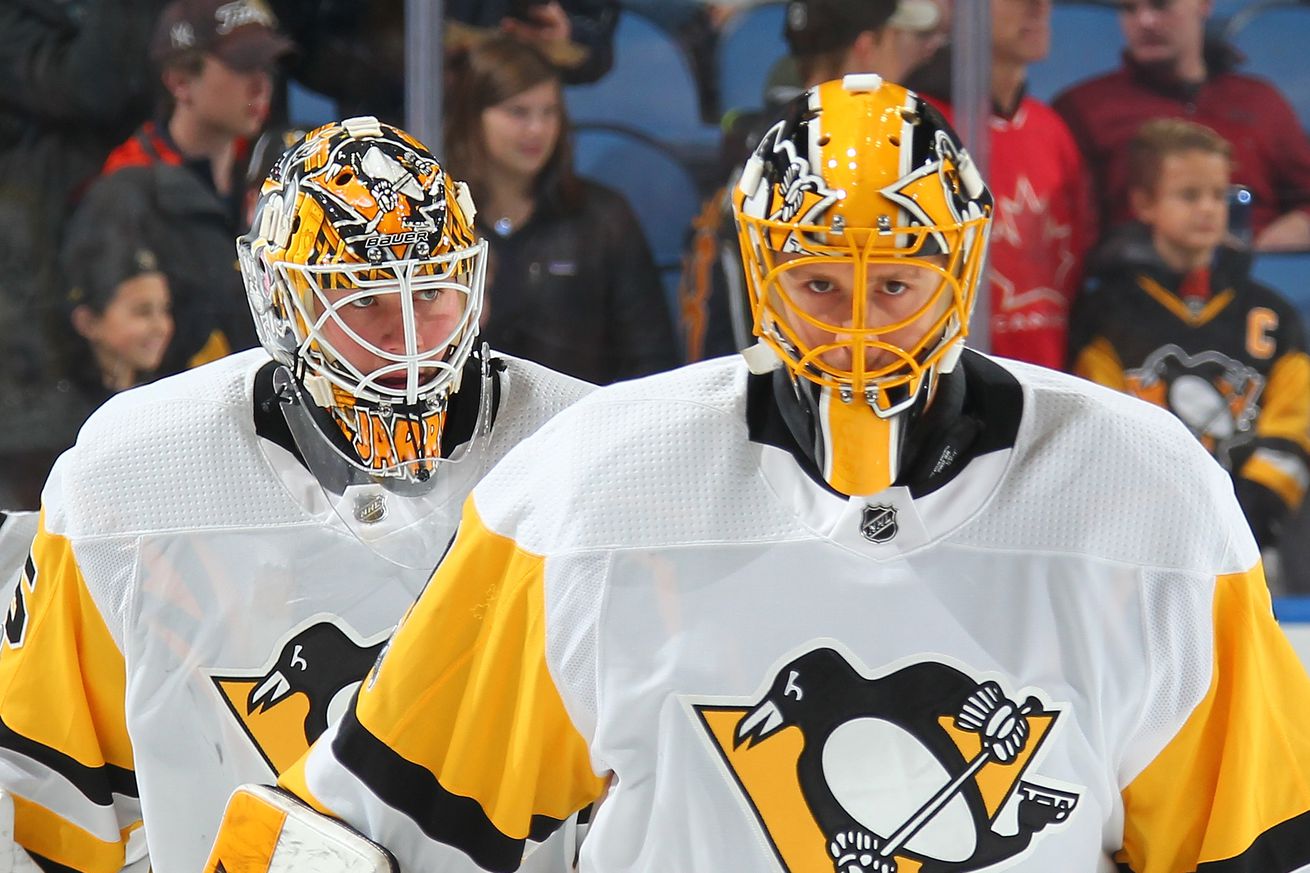 Goaltenders sharing the load is becoming the new trend in the NHL. Could the Penguins deploy a similar system next season?

When talking about a player platoon system in sports, it’s usually in regards to baseball, a sport which utilizes a platoon system more than any other. Depending on what handedness the opposing pitcher is or how the opposing lineup is setup, a team can start one player over another depending on their respective strengths.

Platoons exist in many other sports and can be known by different terms depending on the league. In the NBA, this tactic is known as load management and is something employed by almost every team to limit the wear and tear on their star players. It’s a controversial strategy among fans, but teams continue using it.

One sport that rarely uses that type of strategy is hockey, but that is beginning to change now as many teams are opting for a goalie platoon that splits the workload more evenly between their starter and backup, as opposed to a system that saw the designated starter get the vast majority of game action.

Over the past few seasons, more and more NHL teams are taking some of the load off their starter and giving their backups more starts than in the past. This has provided starters with much needed rest and kept them fresher for when the playoffs roll around. Another benefit of this method is keeping the backups game ready should they be needed at a moments notice.

So today, teams are learning to get around that by adding a second goalie. But now, it seems you add a more experienced goalie that can step in, and not just a kid you throw in on the tail end of a back to back in Canada.

With it looking increasingly likely that Matt Murray is one his way out of Pittsburgh, that will leave Tristan Jarry as the Penguins top goaltender heading into next season. To this point in his pro career, the most amount of games Jarry has played in any season was 47 with the Baby Pens in 2018-19. His NHL high was 33 this season, a year which saw him step into that No. 1 role and become an All-Star in the process.

While it’s clear the Penguins like having Jarry as their top netminder, there will be serious questions to answer as to whether or not he can handle a full NHL workload. What the Penguins define as a “full workload” remains to be seen, but they will surely be asking Jarry for more than 33 starts.

That brings us to the Penguins backup goalie situation heading into 2020-21. Aside from Jarry, the Penguins currently have three other goaltenders under contract. They are Casey DeSmith, Emil Larmi, and Alex D’Orio.

All three goalies saw action in the AHL this season, but it was DeSmith carrying the load and he stands as the only one with NHL experience under his belt. Unless they bring someone in this offseason, it’s a safe bet that DeSmith will be in the NHL next season behind Jarry.

After playing 36 games at the NHL level in 2018-19, DeSmith spent the entire 2019-20 season in the AHL, but having that NHL experience and a team friendly contract in place should seem him back with the big club next season.

A shortened regular season meant no goaltender started 60 games this season, but only Connor Hellebuyck and Carey Price were even close, playing in 58 games each. In total, only seven netminders appeared in 50 games this past season, a far cry from the 18 who reached that mark a season prior, albeit under different circumstances.

If the Penguins were to employ a load management type system for their goaltenders next season, how exactly might it look? Presuming Jarry is the starter, one can assume the Penguins want him making at least 60% of the starts at minimum. While we don’t know the specifics for the 2020-21 season at the moment, over a typical 82 game slate that works out to around 50 games.

If Jarry hits the 50 games played mark, it far exceeds his previous career high but even your above average starters are playing more than that. Bumping the the percent of starts to 75% puts Jarry in goal for roughly 62 games. That number places Jarry in the top-5 of games played a goaltender if you are using 2018-19 as a reference.

That is a heavy workload for a goaltender in his first season as a true No. 1, but the it seems pretty clear right now the Penguins are counting on Jarry to be their guy going forward. It shouldn’t surprise anyone that the Penguins are willing to give Jarry as much action as they feel he is capable of.

Putting Jarry in net for 62 games leaves 20 starts for DeSmith and if he can reproduce some of the quality from his last stint in the NHL then it will go a long way towards helping the team while Jarry rests. Should the Penguins opt to slightly lessen Jarry’s workload, they could easily hand and extra five to seven starts to DeSmith if they are confident with his paly or feel Jarry needs extra rest.

How Mike Sullivan and the Penguins handle their goaltender situation is something that will not be determined in the immediate future and frankly they might not even have an exact answer right as the season starts.

Whether the Penguins decide to goal full steam ahead with Jarry getting 60+ starts or choosing a load management approach that sees a more even balance with DeSmith, it’s clear the NHL as a whole is slowly moving towards a management model, and perhaps now if the right time for the Penguins to get on board.