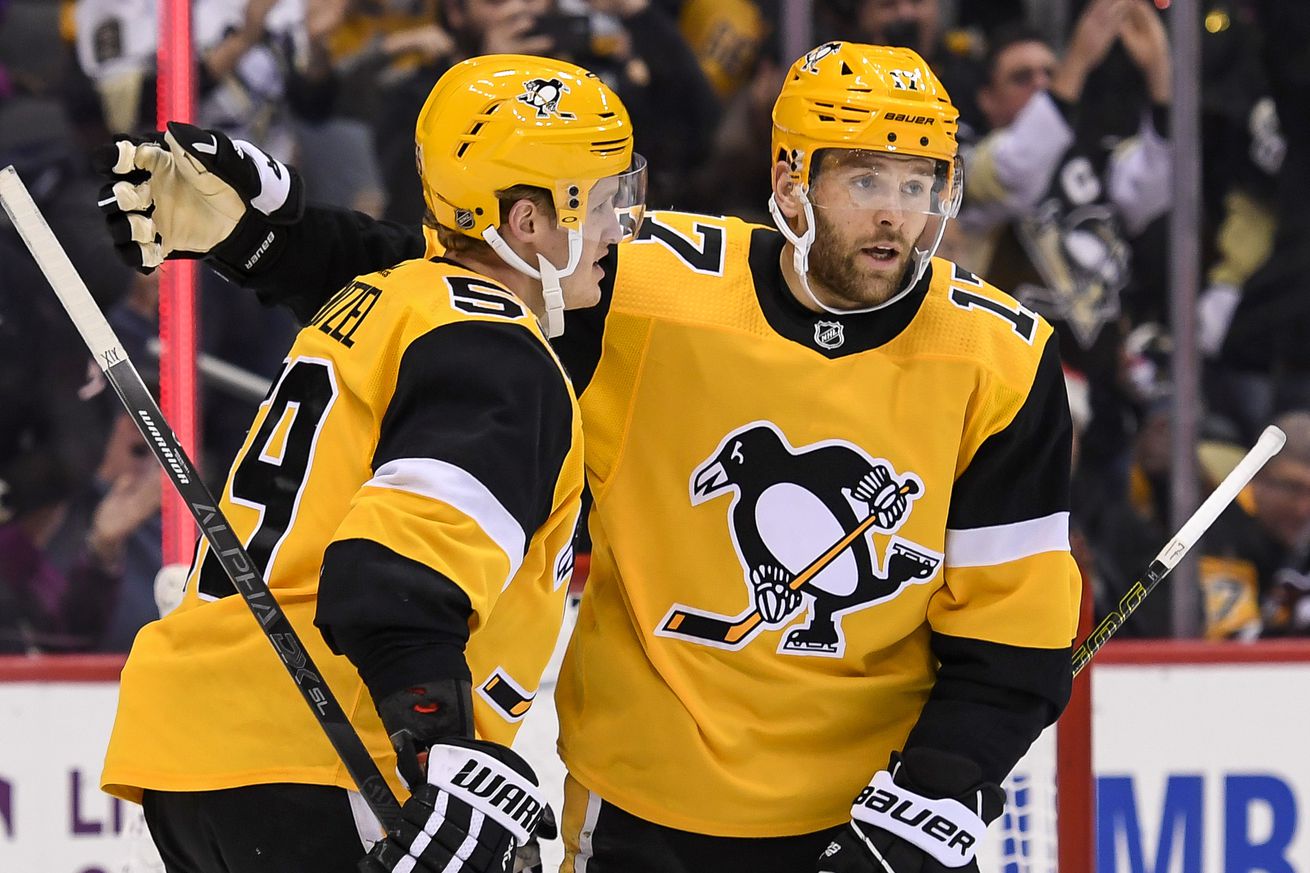 Since we’re going to hold off on putting together the 2020 edition of the Pensburgh Top 25 Under 25 list until after the draft in early October, what better #content for you on a Sunday then to look back at the past?

Last summer we took a look back at the 2015 Pensburgh Top 25 Under 25 list to see how players made moves from being young players into being bigger deals, or maybe not. So let’s move that ahead a year and check out how the 2016 list is looking right now.

—Masonius, now 23, never played a professional game in the Pens’ organization. He split time in the ECHL between Norfolk and Greenville and is on the fringes of pro hockey.

—Almari, 22. came over from Finland to play his first full pro season in North America in 2019-20. He played 51 games in Wilkes-Barre scoring 1 goal and adding 6 assists in 51 games. He’s fairly decent at everything from skating, to defending, to moving the puck but hasn’t really excelled at anything to date.

—Jones finished up a fairly unremarkable career at the University of Nebraska-Omaha in 2019-20. The Penguins elected not to sign him and he is a professional free agent. Pittsburgh pivoted to sign undrafted NCAA defensemen like Josh Maniscalco and Cam Lee this off-season instead of Jones.

—Fittingly and unfortunately enough, the Pens’ got this pick for trading away injury-prone Beau Bennett. Accordingly, Hall’s pro career was over before it began by 2018 due to recurring shoulder injuries.

—Archibald only played 14 total games with NHL Pittsburgh (and 188 more for AHL Wilkes-Barre) from 2014-17 before a trade sent him + a 6th round pick to Arizona for minor league goalie Michael Leighton + a 4th round pick. Archibald hasn’t seen the AHL since, finishing the next 1.5 seasons in Arizona before signing as a free agent with Edmonton for 2019-20. That went pretty well (12G+9A in 62 games) so the Oilers extended him for two years at $1.5 million a pop through 2021-22. Not really sure that’s smart for the team, but good for him! A hard working forward with a bit of finishing ability that has found a way to carve out an NHL niche.

—Bjorkqvist tore his ACL just six games into his North American pro career last October and missed the rest of 2019-20. He’s been loaned to a Finnish team for 2020-21 for his age-23 season and his prospects of making it to the NHL have diminished as time has gone by. Bjorkqvist is scheduled to be a free agent after the 2020-21 season, so we’ll see if the Pens keep him around. Feels like he’s slipping away quietly.

—Made his NHL debut in 2019-20 probably mostly due to the glut of injuries, playing eight games (scoring 1G+0A),

—Ultimately only played 8 total games for the NHL Penguins (doesn’t it feel like more?) over three seasons before bouncing around a bit. Spent most of 2019-20 with AHL Rochester in Buffalo’s organization, with three games in the NHL with the Sabres.

—Blueger spent his first full season in the NHL in 2019-20, being a key penalty killer and defensive center for the Pens, scoring 9G+13A along the way in 69 games and is one of the few on the list who blossomed into being a full-time NHL player for Pittsburgh.

—Simon has developed into a good NHL forward who can’t score and now has a major shoulder surgery to recover from.

—Prow, now 27, hit a ceiling at the AHL level. He had a great year for AHL Wilkes-Barre in 2018-19 (50 points in 74 games) but became a free agent and left the Pens without much fanfare. He signed with Florida’s organization, spending all of 2019-20 with AHL Springfield scoring 32 points in 42 games.

—After miring in the minors for a while, waivers required the Pens to keep Jarry in the NHL for 2019-20 full-time and he more than made the most of the opportunity in becoming an injury replacement for the NHL All-Star team in 2020 and the presumed starting goalie moving forward.

—Kuhnhackl played 2.5 seasons with Pittsburgh leaving in summer 2018 as a free agent signing with the New York Islanders. He’s settled in nicely there as a 12th/13th hard working forward there.

—Bengtsson signed with the Pens in summer 2016 and was ranked high here with the hopes his skill would carry over. Due to injuries it didn’t, he only played 53 total games in two seasons from 2016-18 with AHL Wilkes-Barre and returned to Europe. Bengtsson currently plays for St. Petersburg in the KHL.

—An elite goalie prospect that hasn’t really panned out, Gustavsson, still just 22, finished his third season in Ottawa’s organization after the 2018 Derrick Brassard trade sent him out of Pittsburgh. Gustavsson only had a .889 save% in 24 games with AHL Belleville in 2019-20 (lowest of the three regular goalies on that team) and has yet to make his NHL debut. His star has fallen a bit from his projections.

—Like Dea, Wilson was brought into the Buffalo organization by Jason Botterill for 2019-20, spending most of his time with AHL Rochester. He did play six games with NHL Buffalo (1G+1A) but now at 28 looks on the wrong side of being a fringe NHLer.

—At this point of the rankings in 2016, Guentzel made his mark scoring 14 points in 10 AHL playoff games in 2016. He would, of course, continue to skyrocket, leading the NHL in playoff goals just a season later and then scoring 40 goals in two years later, paving his way to superstardom.

—Likewise, Rust continued his ascent into being a point-per-game player by 2019-20 with the Pens and developing his scoring touch at the NHL level.

—A strange journey since 2016 for Sheary, who scored 53 points in 61 games in 2016-17 and playing a top role in helping the Pens to win a Cup. Then he was traded to Buffalo with Matt Hunwick for cap relief, only to find his way back to Pittsburgh via another trade when the Pens thought Guentzel would be out for the playoffs. Sheary hits free agency again this fall, likely to move on.

—At the time of this ranking Pouliot was floundering and would only play 11 more games for Pittsburgh before being traded to Vancouver for a fourth round pick in 2017. He spent two unremarkable seasons with the Canucks before signing as a free agent with St. Louis, spending most of 2019-20 with AHL San Antonio and getting just two games in the NHL in 2019-20 due to injuries. At 26 it looks like his NHL days are behind him.

—Sprong would only play 24 more games for Pittsburgh after this ranking, scoring just 2 goals before being traded for Marcus Pettersson. Sprong didn’t impress in Anaheim, getting waived and spending time in the AHL before being traded to Washington. The Caps figure to give Sprong, 23, a shot at the NHL next year, but he still hasn’t found a coach or organization that can maximize his strengths compared to his weaknesses that bleed through.

—Dumoulin has developed into a surefire, steady first pair defender for the Penguins and is under contract for three more seasons at $4.1 million per year.

—Maatta had an up and down first season with Chicago in 2019-20, which saw him finish on a high note with six points (3G+3A) in nine playoff games with the Blackhawks in a second pair role.

—It appears Murray’s time in Pittsburgh has come to an end with the conclusion of his latest contract. He started off like a lion steering the Pens to Cup wins in 2016 and 2017 but finished like a lamb with a poor 2019-20 season and unremarkable playoff results in his latter years.