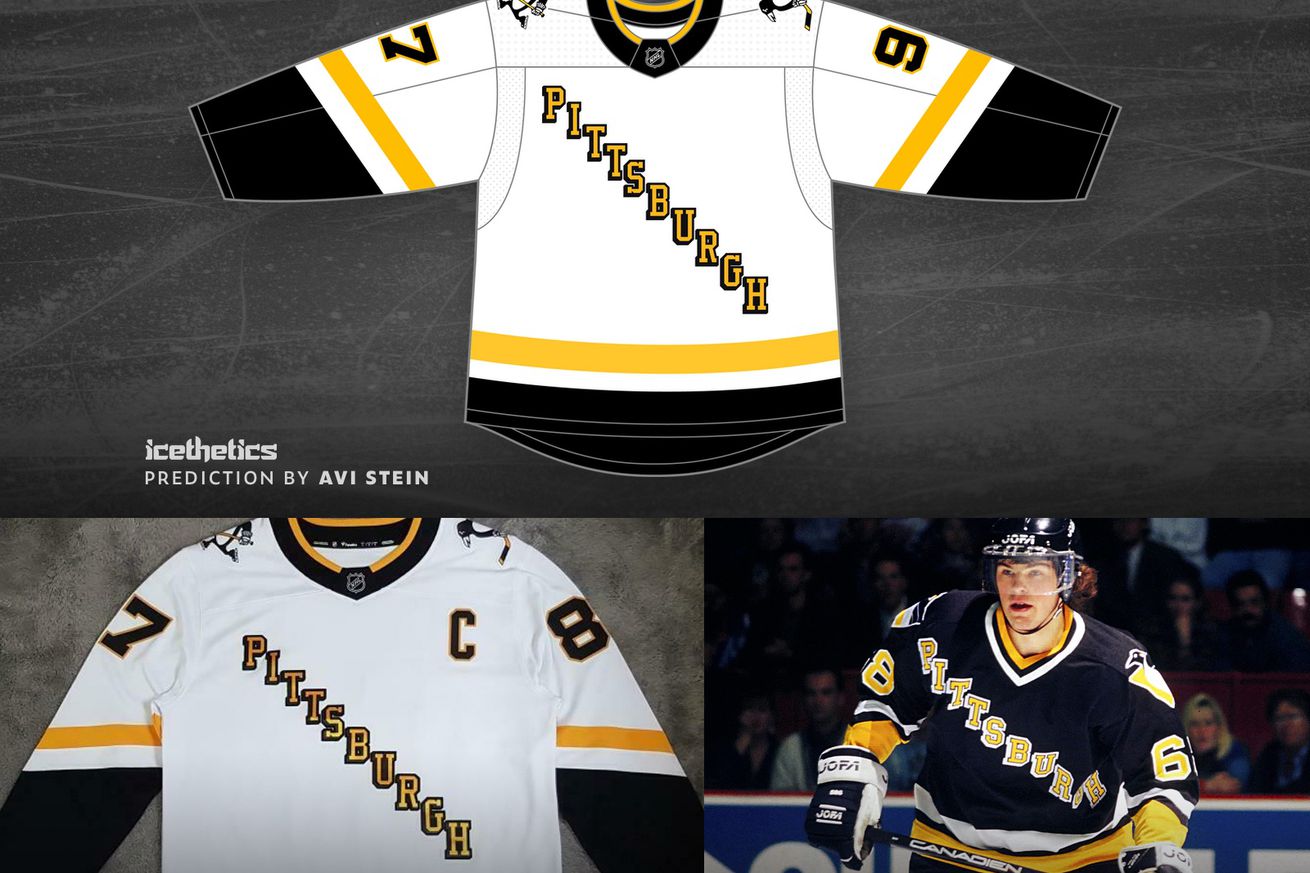 Who has the best new retro jersey? And which jerseys miss the mark

The cat is (almost) out of the bag. As reported in our story almost a month ago, the Penguins are zeroing in on the official release of their new fourth “retro reverse jersey”.

As seen from the hints and tags, the jersey is going to be a take on the uniforms the Penguins wore in 1992-97. The NHL’s concept is a “reverse” retro, so instead of being black like they wore back in the day, it will be white this time around.

Icethetics has been all over this, and is a must follow. Again, I feel this is a big blow to the “Robo Penguin” lovers who pine to see that style coming back. The Pens have already confirmed the shoulders are the skating Penguin in their tweet, replacing the Robo Penguin. (See Jagr’s shoulders above to see how this is a change).

Here are the other jerseys from around the league, with three of the four divisions being out there.

The new #ReverseRetro #NHL jersey reveals are coming soon from @adidashockey. Until then, we have predictions with help from @orionataylor and @Steinosaur19.

Here’s our look at the Pacific Division and the stories behind our predictions!https://t.co/XUTeS17rNv pic.twitter.com/mYr0F1owuF

Another day, another set of #ReverseRetro jersey previews from @adidashockey and the #NHL—this time for the Central Division.

The Metro Division #ReverseRetro jerseys were previewed today by @adidashockey and the #NHL. I have @Steinosaur19 and @orionataylor along to help with predictions.

Here are the designs we expect and the stories behind them!https://t.co/t0rdcBSpgo pic.twitter.com/cF79SUEvr0

What are your favorites? Here’s some takes:

—I love the Pens’ jersey. The “Snoop Dogg” style is awesome. It feels like Jagr and Francis and Lemieux might just take to the ice for warmups and pour it on one more time. I get the “reverse” concept, but I wish it would be a black jersey. Just in the division we see the NYR, NYI, WSH, PHI concepts are all the same primary colors as their usual respective home jersey colors. So why not the Pens too? If this was a black Pens PITTSBURGH diagonal jersey, I think it would be a 10 out of 10. This one is something new, and new is definitely what they’re going for, but it is fair to say that black would have been preferable to white.

—New Jersey: I love the “Christmas” colors. Jersey doesn’t do much right, but this is one thing they do get right! I dig green jerseys as a rule anyways, and this one has historical roots. Two thumbs up there.

—Kings purple: looks awesome. The perfect throwback to the early days of the franchise that are definitely Lakers inspired colors, but also hearkens back to the day of Marcel Dionne and pre-Gretzky Kings, which barely gets any love.

—The Ducks’ crazy ‘90s jersey: looks like straight off of what you could be playing on the beach in a roller hockey tournament. Beautiful and fitting for SoCal and this team and franchise.

—Vegas red: I really like this one and the logo. Might not be everyone’s cup of tea, and they obviously don’t have any history to make a real “retro” concept, but they have that needless red stripe in their normal jersey, so this one at least incorporates that in a major way.

—I dig the NYR “Lady Liberty” design. Doesn’t make for a great every day logo, but it’s a nice look here for a change of pace style.

—I like the Dallas jerseys. Looks like Brett Hull is about to step into the crease and score a Stanley Cup winning goal. Dig that look, and it definitely brings to mind the time the Stars were a pretty solid team in the late ‘90s and early 2000’s, so that’s always a good thing too. Kinda wish there was some yellow in there instead of the gray they have instead for some unknown reason, but what can ya do.

—On the surface the Nordiques jersey for the Avalanche is sweet. No doubt about that. But that’s a Quebec jersey. The Avs play in Colorado now. The colors and scheme is awesome, but the “Northmen” in Denver? Ehhh. I guess. Not that fitting even though there is the franchise ties, that jersey just represents Quebec City to me. It is a very sweet design with the Avalanche colors in there to marry the past to the present, but I don’t know. As nice as it is, something there doesn’t feel right.

—Similarly, a lot of the above applies to me for the famous (and undoubtedly great) Hartford Whaler jersey for Carolina. I think I’d prefer just the full green anyways but it is a “reverse” jersey. Still, feels a little odd to be celebrating Brass Bonanza and the Whale in landlocked Raleigh, the place that stole the Whalers away. I think I would like a gray or black Hurricane flag jersey (similar to their current third jersey) but that’s probably too similar for the retro concept.

—The Vancouver jersey has promise, but I don’t like the green-blue-green changes. Why not just stay all one color? Or even better go back to the classic Vancouver black/yellow/red scheme? This one had promise but is only OK. Could have been great if they dipped back into the franchise’s history. They already wear green/blue normally as it is, why not go back in time to the black/red/yellow?

—I like that the Arizona jersey is funky, but I feel like since they already recently brought back the Kachina jersey last year (which would have been an absolute smash hit here), that kind of steals the thunder for a concept this time around. They already had the right answer but used it for their third jersey, which means the fourth jersey is lesser. No biggie.

—I feel like everyone was like “meh” about that alternate Calgary logo 15-20 years ago, so I don’t really see the need to bring that back now. It’s one thing to bring back logos or color schemes that was universally loved, but these aren’t really that.

Swing and a miss

—The Capitals wear red as their primary color normally. Why do they have a red “retro reverse” jersey? Feels like a missed opportunity to mix it up a bit more and the red bleeding into the logo feels like overload rather than having it stand out. Going back to the roots of the old eagle logo is pretty cool, though. A white/blue jersey from the ‘90s would have been more fitting.

—Similarly, that Islanders jersey looks exactly like what they wear 100% of the time anyways, not sure how this is anything new. Given how fun the Ducks’ and Coyotes’ jerseys are, why not bring back the “Gordon’s Fisherman” jersey? (Full disclosure: I’m one of like 10 total people that unironically don’t hate that design). But still, if they’re only wearing these very occasionally, why not? This current NYI concept is nothing new or exciting.

—A big no to the heavy orange coloring inside the Oilers logo and the shoulders. Just no. Can we not? This looks awful.

—Speaking of bad, that Blackhawks jersey looks like a house league team that ran out of money and had to get a uniform look for everyone and just chose the cheapest and easiest one available. (And invariably that one guy is going to show up, forget their jersey and just wear some random black or dark colored jersey, You all know that guy). Chicago has such great jerseys and looks, like most Original Six teams, but why throw it back to such a bad one? Uninspiring.

—The Blue Jackets wearing red. BLUE Jackets. Red jersey. Umm, ok. I do like that logo, but the scheme of the major color doesn’t make a lot of sense.

—The St. Louis Blues also wearing mostly red looks odd. I do love the accents at the bottom of the jersey and the ‘90s style, but to me this one missed the mark. Close, but not quite there. I get how it’s the flip of the old jersey, but why not make this one white? It would have looked a lot better.

—The Winnipeg Jets jersey is really uninspired. Especially since Minnesota is so good with their nod to their first franchise (and Colorado/Quebec and Carolina/Hartford too), it really feels like the Jets could have gone for some kind of Jets 1.0 type Teemu Selanne/Dale Hawerchuk-era 1980s jersey and really done a lot better. Instead, I can’t imagine this plain gray design, which isn’t retro at all, is going to get anyone excited.

What about you, what do you think are the best and worst of the concepts above? And after a little while longer to have seen the Pens’ jersey are you more or less a fan of the white “Snoop Dogg” look? And for the question the NHL and adidas really want to know — would you consider buying one?