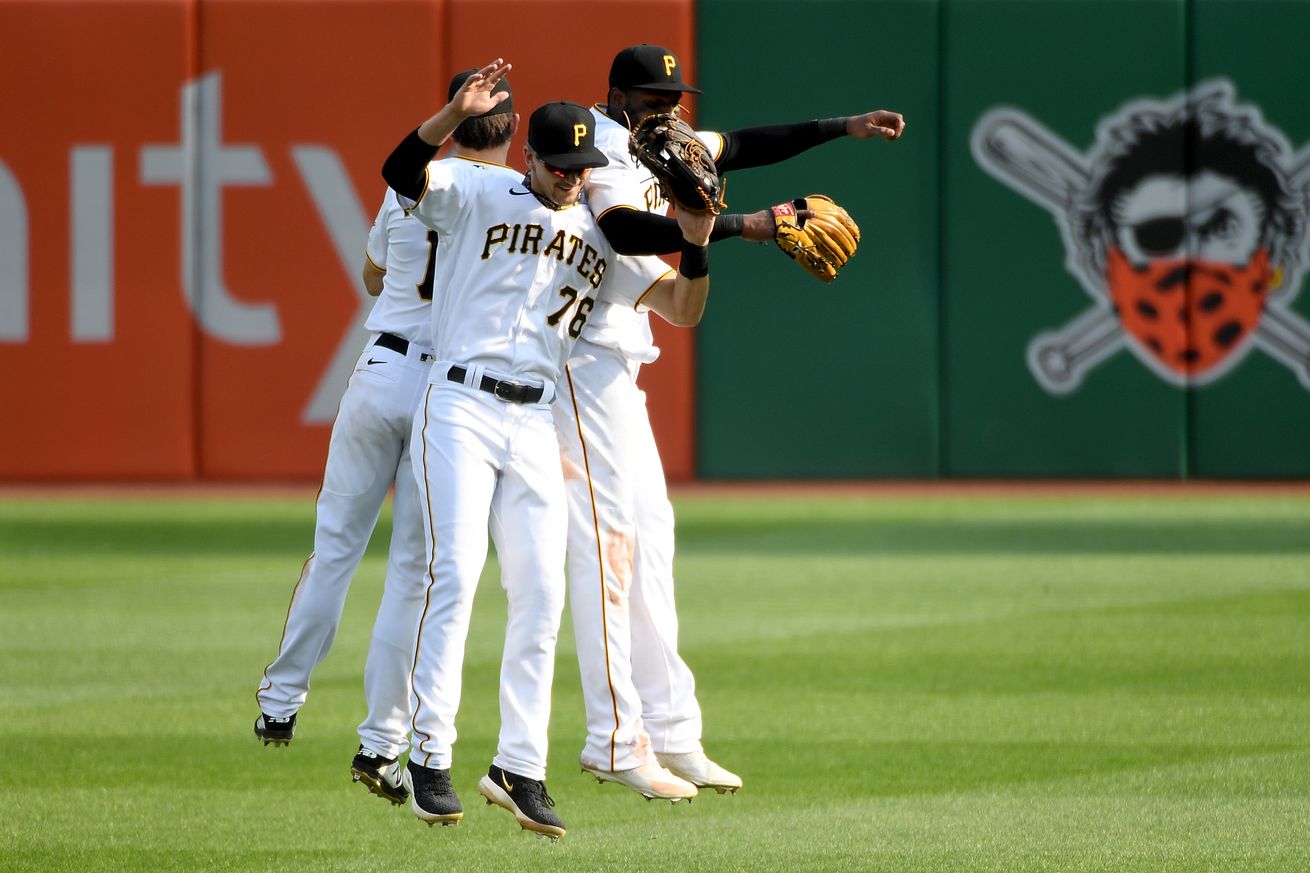 It was indeed three in a row! | Photo by Justin Berl/Getty Images

For the optimists, this game showed a team that, if given more time, might have done some good this season.

For the pessimists, this game meant another blow against possibly obtaining the living lottery ticket known as Kumar Rocker.

Either way, Chad Kuhl took a no-hitter into the sixth inning and the Pirates battery unleashed fourteen hits, including four homers, as they shut out the Cubs 7-0 this afternoon at PNC Park.

Things got started in the bottom of the first inning with a Colin Moran bomb to center field. Bryan Reynolds contributed his own center field tater in the second inning to make it 2-0, and Jared Oliva—or Olivia, according to some in the Bucs Dugout commentariat—got an infield single for his first MLB hit. Welcome to the Show, kid.

One of the biggest problems the Pirates have had this season is not providing run support when the starter/reliever is on a roll. That was not a problem today, as Adam Frazier slammed one over the Clemente Wall in the third inning for the 3-0 Buccos lead. The fun continued in the fourth inning with a Reynolds single, another bobble hit by Oliva/Olivia (unfortunately he got nicked out by an actual JT Riddle hit), and Frazier singling Reynolds home. 4-zip, yes!

Josh Bell hit the fourth Pirates homer in the fifth inning, bringing home Moran after he singled for a six-nothing lead. Redbeard went three-for-three with a walk today, continuing his good bat ways. Gregory Polanco delivered the final Pirate run courtesy of a sac fly that let Ke’Bryan Hayes cross the plate. Geoff Hartlieb and Blake Cederlind had 1-2-3 innings in the eighth and ninth, and the Jolly Roger was raised.

No matter how you feel about the season, you have to feel good about Kuhl’s performance today. Two years after his Tommy John surgery, he was firing on all cylinders. He pitched himself out of trouble not once, but twice. In the fourth inning, he walked Anthony Rizzo and Jason Heyward, but got the next three batters to line out. Rizzo broke up the no-hitter in the sixth inning (boo, but it was after Kuhl struck out the side in the fifth), and in the next inning Jason Kipnis doubled and Kuhl hit Javier Baez, but Kuhl kept his … um … cool and Riddle turned a sharp unassisted double play to keep the shutout going. Yeah, that was our reaction too.

Taking three out of four from the current division-leading team is something that the Pirates should take pride in accomplishing. They know that in this strange season they just ran out of time. If this was late May instead of late September, they’d be getting noticed.