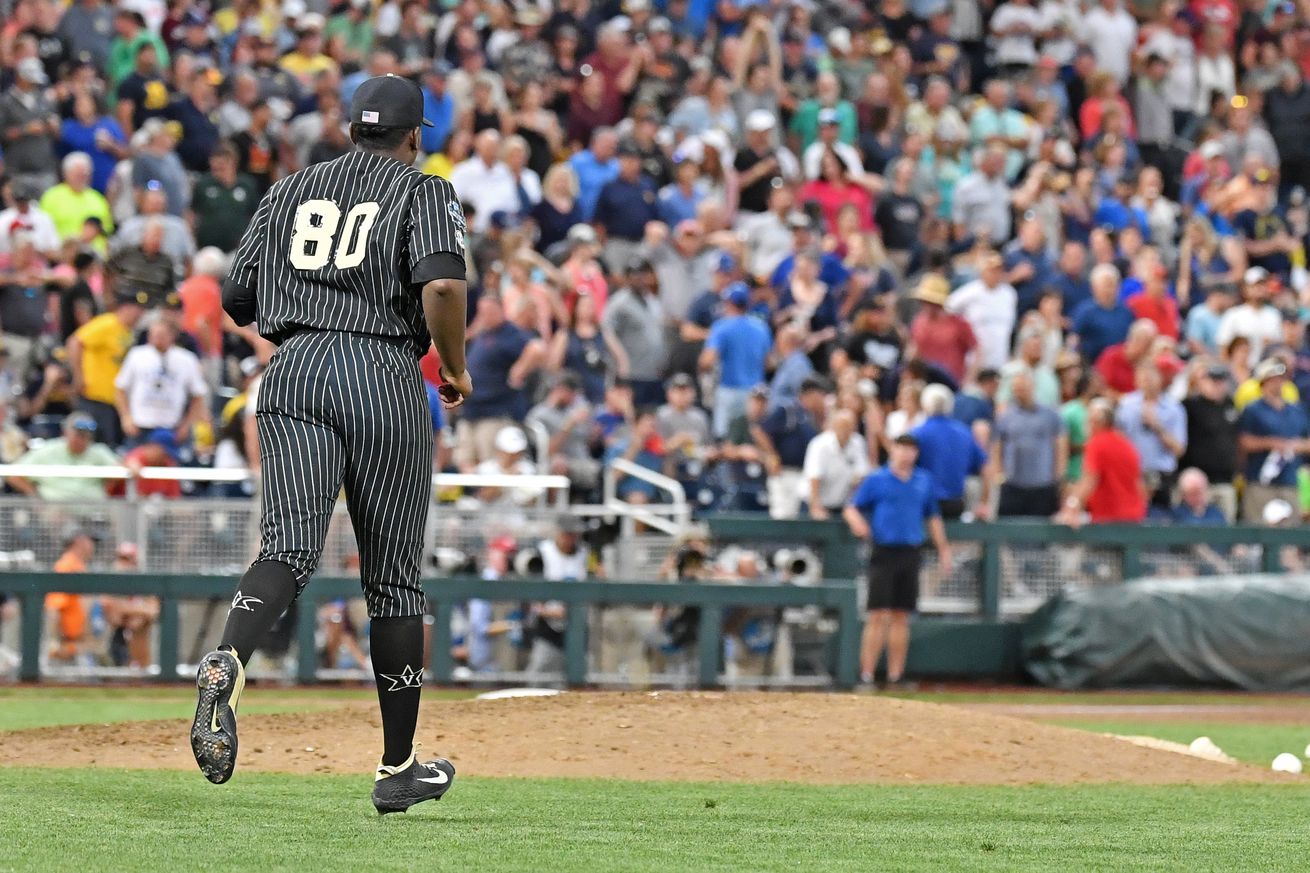 Kumar Rocker is a name all Pittsburgh Pirates’ fans have heard by now. For many, the Vanderbilt pitcher was a shoe-in to go in the top spot of the draft, regardless of who had the pick. I’m under the impression the Pirates will do that very thing, just as all the other 29 teams would do in their shoes.

Perhaps the Pirates days of drafting for signability are over (think Daniel Moskos, Tony Sanchez) and instead player development being the reason for why players like Gerrit Cole are good to average in Pittsburgh — not great.

If that’s the case, I would expect Pittsburgh to take the Commodore. Rocker, a 6’4, 255 pound Sophomore, will begin his season sometime in the spring when college baseball returns to the diamond.

During year two of his time with Vandy, he only got to pitch in three games before COVID-19 shut his — and everybody else’s — plans down. He got three starts and pitched 15 innings to the tune of a 1.80 ERA. Every scout in baseball will likely flock to Charles Hawkins Field in Nashville, tucked delicately beside the Commodores’ football stadium — and for good reason.

The big righty’s fastball sits mid-90s with movement to go along with a hearty slider and a potentially strong changeup. Now, put all that with the night that put him on everyone’s minds: When he struck out 19 Duke hitters and no-hit the whole squad in the NCAA baseball tournament Super Regionals. His stock has been on the rise ever since.

It seems like every writer of every team has done a writeup of Rocker; some had optimism that they’d be able to land him, while others were just performing their due diligence. But now the Pirates have a chance to actually be that team. If they won’t select him, the next organization, the Texas Rangers, very likely will.

So, what are the Pirates to do? First step, draft him. There’s the pesky possibility that Rocker will opt to not sign with the Pirates, which would be a legitimate concern of the front office. After all, teams don’t gain the first overall pick very often, so not squandering it might be a priority.

Rocker would have another year of eligibility at Vanderbilt and could simply return to school and try again the next year. Although I haven’t heard any rumblings that Rocker would be unsatisfied with the Pirates picking him, I wouldn’t be entirely surprised if that were the case. As we know, the Pirates are not revered as a team with a winning tradition. Some might argue they aren’t even on the right track. The former point is true; the latter point is (hopefully) tipping the scales differently now with the introduction of Ben Cherington.

With all that said, it’s therefore feasible Rocker’s agent dials up the Pirates front office and states simply that Rocker is unwilling to sign with the Pirates, which would free Pittsburgh up to a host of different draft options, all of which will be at least mildly disappointing by comparison.

But let’s say they draft Rocker and he signs. Then what? Firstly, the organization should expect to invest around $8.5 million in him immediately. That’s been standard fare the last couple years and it certainly won’t be going down this time around. That’s all well and good for Rocker, and it’s fine for us fans since we don’t foot the bill directly (the argument could obviously be made that we pay for it indirectly: Ticket sales, merchandise, beer, etc.), but the front office might balk at that number. The Pirates do have a history of drafting players under slot value. But I have a feeling those days are over and that fans should still expect Rocker to be the selection.

At that point, odds are he begins his career in Bradenton, the Pirates’ A-Adv. affiliate. Major League Baseball’s minor league contraction doesn’t affect Rocker anyhow, as he was unlikely to spend any time at the former short season locations.

From there, a pick like Rocker could bounce through the system fairly quickly. It wouldn’t be surprising if Rocker began in Brandenton, made a stop in Altoona, and then finished up in Indianapolis on the doorstep of the big leagues. So where does that put his timeline? It means we could theoretically see Rocker in a Pirates’ uniform mid-season 2022 after spending half the year with the Triple-A Indians.

With other moves by Cherington (which are yet to be seen), that would put Rocker in Pittsburgh during their potential contention window, beginning sometime in 2023 to 2024. How Rocker progresses from a developmental standpoint is completely contingent on Pirates’ operations, hopefully a department Cherington can overhaul into peak form. And as we know, Rocker’s tenure in Pittsburgh won’t last forever. Eventually, he’ll be flipped at the deadline for prospects, something we have to accept. But the hope is the Pirates can play three or four years of meaningful baseball with Rocker in the rotation.