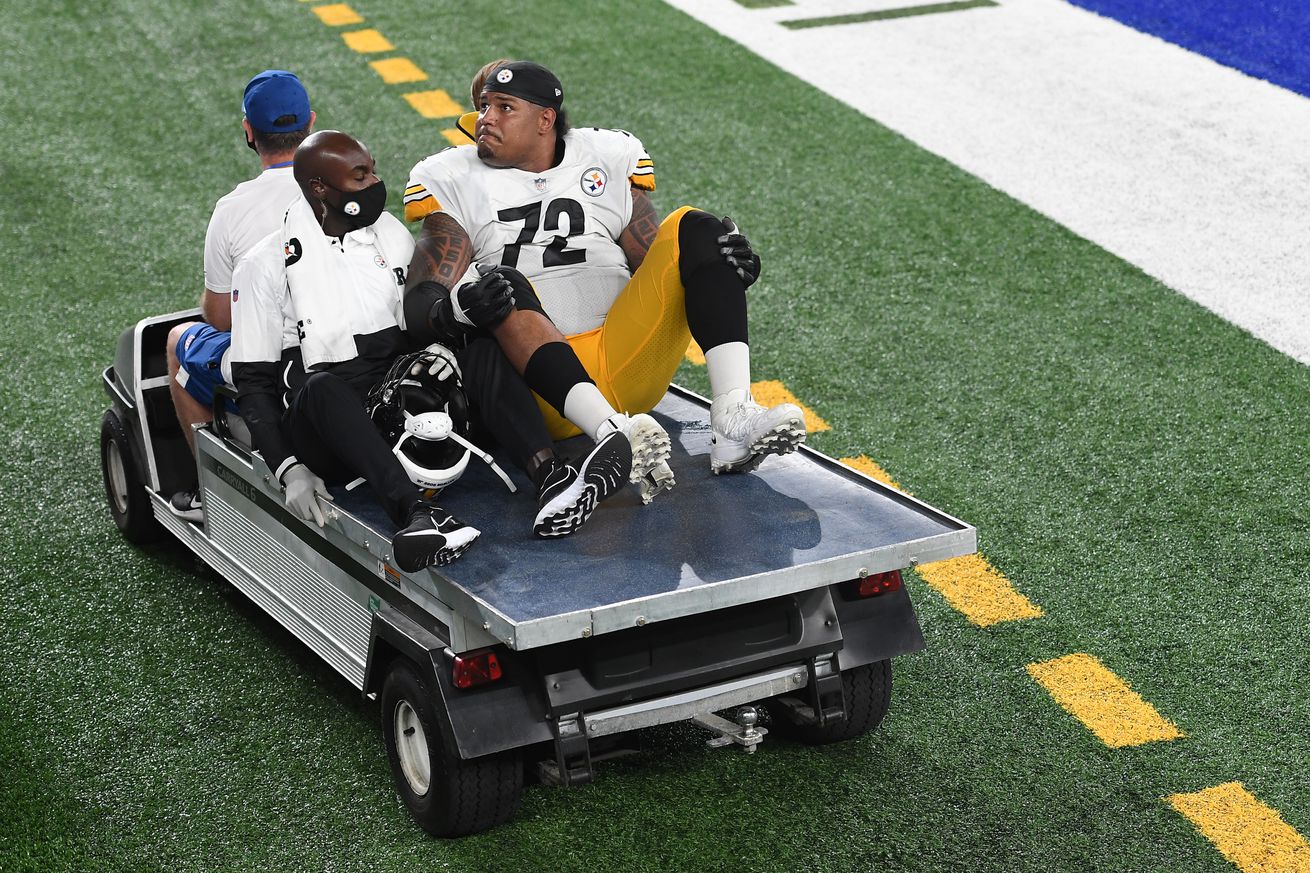 The Steelers head coach was asked lots of questions the day following the Steelers 26-16 win over the Giants.

The Steelers 2020 regular season has officially begun! The only time we can expect to hear from head coach Mike Tomlin is during his regular Tuesday and post game press conferences, although he may sprinkle in some practice interviews along the way. While not always asked about specific players, this week had plenty of questions. Since Coach Tomlin gave us the material, we’ll take a look at the players mentioned in Tomlin’s press conference. Remember these players are ones brought up during the question and answer period.

The Steelers were forced to make a change at running back early in their Week 1 game. Coach Tomlin was asked if it was a schematic issue which kept Conner from getting going early and if it was cleaned up by the time Benny Snell took over.

“A lot of what happened in the early portions of the game can be attributed to that. Like we talked about last week, we didn’t have any video evidence of their personality on offense, defense or special teams. We knew the reputation of the individual coaches, but we didn’t necessarily have an understanding or a definite understanding of what the collective would look like and how they would utilize the talents of the players that they have. Some of that stuff was being discovered at the early portions of the game. There’s consequences for that.”

Tomlin was asked a follow up question if Snell is able to be the “bell cow”?

“I think he displayed that last night.”

In yet another question, Coach Tomlin was asked if Conner was banged up coming into the game and if Conner’s durability concerns him.

“It does not. I lean on the expert advice of the medical staff in terms of availability and things of that nature. He didn’t have anything wrong going into the game. It occurred at the early portions of the game.”

On back-to-back plays, the Steelers had the right side of their offensive line leave the game. Coach Tomlin was asked about the performance of Okorafor and Dotson coming off the bench, and he took the liberty to mention the right tackle competition with Banner in training camp.

“I think those are two different discussions. We’ve talked quite a bit about Chuks along with Banner and the battle that they had for right tackle. And like I’ve said repeatedly, I thought both guys were starter capable and I still feel that way. So, I’m extremely comfortable with Chuks and his ability to play and his overall readiness. Dotson is another story. He’s a young guy who hasn’t had a lot of work throughout this process because of injury and lack of availability. There is some angst there, so if he is called upon this week, it is going to take a tremendous effort by him and by us. And by us, I mean us putting him in the very best position to perform, so there is some dual responsibility there.”

Tomlin was asked another question in regards to Banner and the emotions involved with possibly missing the entire season after winning the job.

“You said it. It can be a cold game, but it is a lot like life. We are not defined by what happens to us, we are defined by how we respond to it. Whenever unfortunate events like that occurs, we talk openly about that. it’s not that he got injured after all that he has been through and the fight he has been through to get where he is, it is about what he does moving forward and responds to it. He is a competitor, he is a professional and I expect him to smile in the face of adversity.”

One of two players who was dressed for Monday’s game was reserve center J.C. Hassenauer. Coach Tomlin was asked what he saw in training camp from Hassenauer

“J.C. has been in our program. He was on our practice squad last year. He’s a very capable backup. A guy that we are comfortable with in terms of knowing what to do and having an understanding of his skillset. He’s an interior backup rotational player that is capable of being called upon if need be.”

It was great to see a strong start to 2020 for JuJu Smith-Schuster as he hauled in two touchdowns on the night. Coach Tomlin was asked if his success was due to his hard work in the offseason or the fact he was healthy.

“That is JuJu. He came in ready to play and he performed well. But we have seen that from him most of the time that he has been here. I don’t know if any of us were surprised by what he delivered last night.”

“Yes, he did discuss that with me. And this is in line with everything we said about participating in elements of social justice this offseason. As an organization and myself as a head coach of an organization, we are going to support our players in however they choose to participate and express themselves or to not participate or not express themselves. As long as they do so thoughtfully and with class. And so that is a blanket approach that we have had. I think it needs no further explanation in terms of our support for Al Villanueva or anyone else in terms of what they do or do not do in terms of social justice as long as they adhere to the outline that I just outlined for you.”

The only Steelers’ player who missed Monday’s game due to injury was All-Pro guard David Decastro. Coach Tomlin was asked about both the short term and long term availability of DeCastro.

“I don’t know. I’m hopeful he is able to work tomorrow. We will see.”

One player on the Steelers offensive line who could be moved around due to injuries is guard Matt Feiler. Coach Tomlin was asked about Feiler’s play on Monday and if moving him to another position is on the table.

“We are making some moves on the offensive line, so I won’t speculate on what that depth or the pecking order will be until we handle that necessary business, but I do like the play of Matt at guard. I do like the play that he had last night. I do know that he is tackle capable and so I’m sure that will be an element of the discussion at the appropriate time.”

The Steelers speed on the outside when it comes to their pass rush has been well noted. Coach Tomlin was asked about the play of Bud Dupree and he took the opportunity to bring up T.J. Watt as well.

“Bud is a dangerous guy. As is T.J. When you have an outside linebacker tandem like that in the 3-4 defense, you have an opportunity to play great defense and we are cognizant of the contributions of those two men and appreciative of it and that is why were are excited about the group that we have.”

#LIVE: Coach Tomlin addresses the media ahead of our Week 2 matchup against the Broncos.@PNCBank https://t.co/8kW2PtVb4z