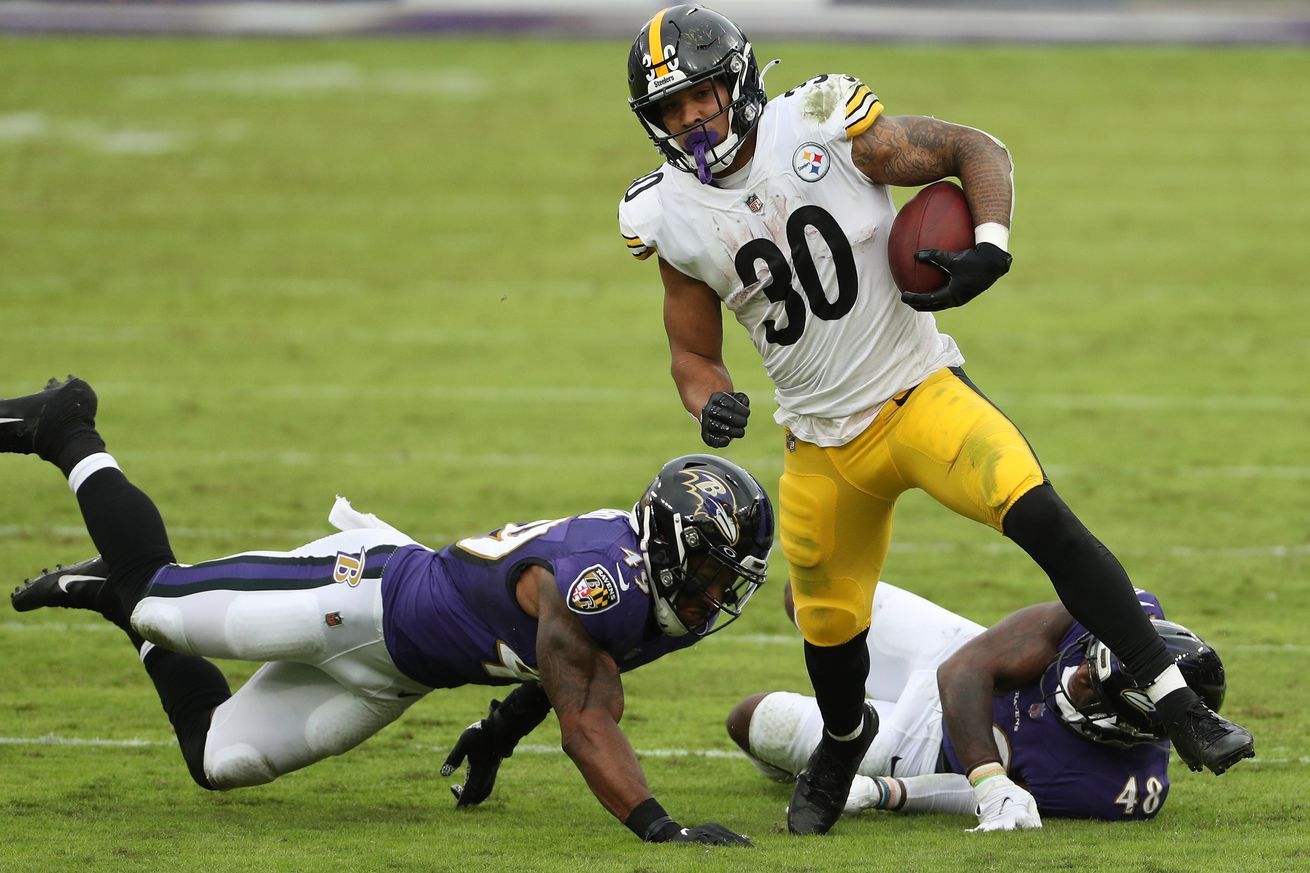 The Steelers head coach was asked lots of questions about their upcoming opponent, but he was more than willing to speak about his own players.

The Steelers are back into the swing of things after their big win in Baltimore on Sunday, and that means hearing from Steelers’ head coach Mike Tomlin on Tuesday. Between injures, trades, and a variety of other topics, there were many players discussed. While not always asked about specific players, this week had several questions about players and Tomlin took liberties to bring up others. Since Coach Tomlin gave us so many names in his responses, I’m going to list them separately as players who he was asked about and ones he mentioned in his answers. Remember these players are ones brought up during the question and answer period.

The Pittsburgh Steelers made a move on Sunday evening to help sure up their inside linebacker position as several players have incurred injuries. Coach Tomlin was asked about the Steelers decision to make a trade with the New York Jets in order to acquire Avery Williamson.

“I met Avery at Bud Dupree’s Pro Day after his rookie year. There was a lot of downtime during the course of that day, and we kind of gravitated toward one another. His passion for football comes through in general conversation. He’s a football lover. He’s a football junkie, if you will. I’ve followed him throughout the course of his career because of that. In the early stages of his career, he played down in Tennessee and played in a system that was very similar to ours not only in terms of how it was constructed but the language itself. He’s a guy that fortifies depth in an area in which we have been challenged recently. We know that we lost Devin Bush and lost Devin Bush for 2020, but additionally to that in recent weeks, Ulysees Gilbert has been less than available with a back. At the trade deadline, we thought it was necessary if we had an opportunity to get a known commodity, one like Avery Williamson that we are somewhat familiar with and is somewhat familiar with our schematics, and put him into the fold, with as much ball that we have that lies ahead, it was a prudent thing for us to do. We’re excited about having him.”

Coach Tomlin was asked a follow up question about Avery Williamson and his role in the Steelers’ defense.

“We don’t have the answer to his availability. A lot will be determined by the process this week, the teaching and learning process, which will be challenged because of the Covid protocol. We will be working with him remotely until Saturday, but also, some of the other things that are going on around at his position will be a factor at whether or not we attempt to do that. From a long-term standpoint, we have a vision of him, being a third inside linebacker, a guy that’s position flexible, a guy that is capable of supporting Robert (Spillane) and Vince (Williams) and being available if anything should happen to either.”

Ben Roethlisberger was able to lead the Steelers’ offense to a come-from-behind win after facing a 10-point halftime deficit on Sunday. Coach Tomlin was asked about Roethlisberger adlibbing in the second half and if it is something they should consider more going forward.

“Adlibbing is a stretch. We run some no huddle. We have protections and within those protections, he has some options in terms of route combinations on either side of the field is a function of how we move in no huddle, if you will, in two-minute and situational ball. We were behind 10 against the Baltimore Ravens, a group that possess the ball and does a really good job of possessing the ball. I don’t know that they have lost a game the entire time Lamar Jackson has been starting when leading at the half, so it required that we pick the pace up and utilize some of that stuff. We weren’t drawing in the dirt, as you suggest.

There were some interesting trends when it came to playing time within the Steelers offense in Week 8. Coach Tomlin was asked about James Washington’s decrease in snaps and if it was more of a better matchup with Ray-Ray McCloud.

“And also, just from a time of possession standpoint, Baltimore possessed the ball in the game, and we didn’t. So, there were less snaps to go around for any offensive player that you could suggest. We had a desire to play Benny Snell. Benny Snell has been a quality, young, supplementary contributor. He played zero snaps of offense in the game, for example. I think Anthony McFarland played one snap. When you’re not possessing the ball and the other team is and you’re not converting third downs, particularly in the first half of the game, there’s going to a snap scarcity. and you can have that discussion about any individual player, particularly some of those that play a support capacity, if you will, relative to our planning”

The Steelers used some different packages on Sunday against the Ravens, one of which involved five linebackers. Coach Tomlin was asked about the effectiveness of the five-linebacker package and if it was due to the loss of Devin Bush.

“I thought it got the job done. It was situation specific, but to be completely honest with you, it probably had to do more with the lack of Mike Hilton than it did anything at the linebacker position. When we get in our sub-package football, Mike is a unique run defender for a guy that plays his position. A lot of things that were going on in that game were in three wide receiver sets. They were in what you would globally refer to as “kings”. The lack of Mike Hilton was significant, so we did some things to try to level the playing field in that regard and that probably speaks more to his value than it does some of the things that were going on at the linebacker position in terms of lack of availability.”

With the injury to Tyson Alualu in the first quarter on Sunday, second-year player Isaiah Buggs was called into action one week after being a healthy scratch. Coach Tomlin was asked about Buggs’ growth since he was drafted in 2019.

“I think first and foremost he is continually gaining an understanding of what professional conditioning is about. I don’t know that he understood that a year ago. That’s often the case for young people. He’s really improved in that area, moving into his second year, and I think that is providing a springboard for an improvement in play. It’s reasonable to expect him to continually get better with more snap exposure. I know he did on Sunday in that game. We’re excited about him getting additional opportunities going forward and expect him to continually get better.”

One player the Steelers are set to get back from the Reserve/Injured List is offensive lineman Stefen Wisniewski. Coach Tomlin was asked if the Steelers had to make a decision with Wisniewski this week.

Another linebacker who may or may not be available for Week 9 is Ulysees Gilbert. Coach Tomlin was asked about if he expects Gilbert to be in the mix this week.

“We will see. It depends on how his back behaves.”

With the exception on Week 1, James Conner has managed to stay healthy for the Steelers so far in 2020. Coach Tomlin was asked if there were specific skills Conner had developed which has helped him to keep from taking direct hits.

“You know, physical confrontation is a part of his play. I don’t think [James Conner] is avoiding that. I know I appreciate that element of his play. He’s really finding his rhythm. He’s utilizing all of the tools and developing skills that are going to make him a complete back down the stretch for us. I like the overall trajectory of his play. He’s a competitor. He’s a combative guy. I don’t think he’s running away from confrontations or fears of consequences of those.”

#LIVE: Coach Tomlin addresses the media ahead of our Week 9 matchup with the Dallas Cowboys. https://t.co/NDfSjiPNFr