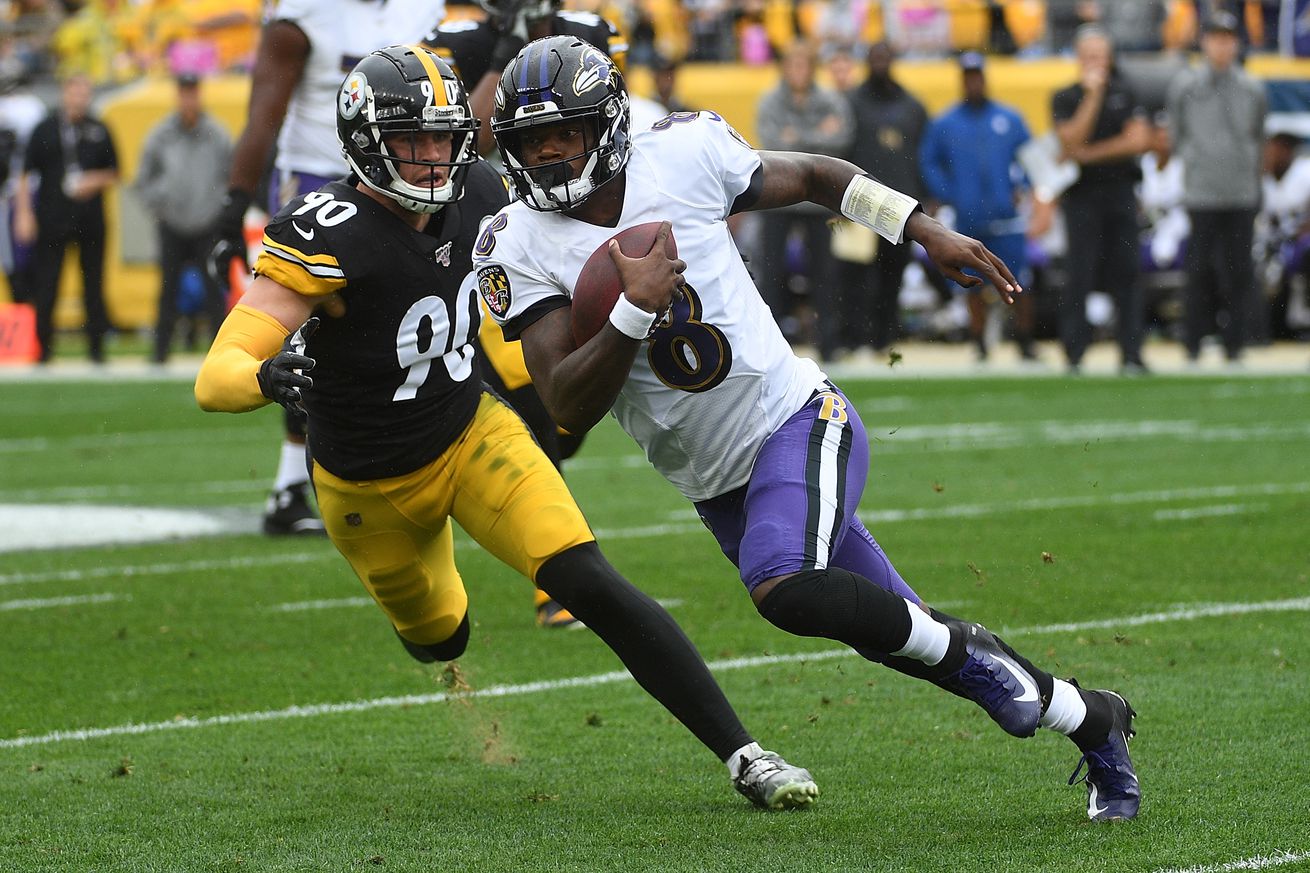 Can the Steelers challenge the Ravens for supremacy? Will the Browns end their playoff drought? One BTSC writer offers his prediction for each team in the AFC North.

The 2020 NFL offseason has undoubtedly been a wild one, both due to league transactions and ancillary events.

In terms of football itself, there appear to be lots of big names still on the trade market, including the Jets’ Jamal Adams and the Jaguars’ Yannick Ngakoue, both of whom are seeking hefty paydays at 25 years old or younger. Further, the 2020 free agency period has had some straggler veterans who would still be splash landings for any team as outside linebacker Jadeveon Clowney, cornerback Logan Ryan and defensive end Everson Griffen are still unsigned.

The other major realm which will definitively shape the 2020 season is the COVID-19 pandemic. Only in recent weeks have coaches and front offices returned to their teams’ headquarters. Players have even been advised by NFLPA Medical Director Dr. Thom Mayer to pump the brakes on group workouts after athletes on multiple squads have tested positive for the virus.

Roger Goodell and his staff still have a plethora of logistics and plans to sort out in advance of September 10th—the league’s inaugural regular season game—but for now, it seems as if an NFL season can and will occur under the guidelines of society’s “new normal.”

As the majority of depth charts have been finalized subsequent to the NFL Draft, I’ll be taking a spin around all 8 divisions in a 9-part series and predicting all teams’ records before the year begins, going game-by-game for all 256 contests and even for postseason play.

These predictions are meant to reflect not just which team is better in a duel of two coteries, but who I feel the likely winner will be based on circumstances and situations.

Feel free to bookmark these articles as the year unfolds; as always, you are welcome to comment your own predictions as I go along, or even ask for justification for specific game outcomes!

Without further ado, the first stop on the itinerary will be the formidable AFC North.

The Ravens have the easiest schedule in terms of their opponents’ 2019 win percentage which will certainly help John Harbaugh’s team, though they definitely don’t need any extra assistance. This unit is absolutely loaded on both sides of the ball and should be viewed as a bonafide AFC contender.

The Ravens have one of the top offenses in the NFL with reigning MVP Lamar Jackson under center in spite of their poor receiving corps, but I expect a big year from Marquise Brown. Expect more of the Ravens’ rushing prowess to continue in 2020. Lamar Jackson’s 1,206 rushing yards paired with Mark Ingram’s 1,018 ground yards helped Baltimore eclipse the all-time single-season team rushing record.

On defense, Baltimore boasts, in my view, the best corner duo in the NFL via Marcus Peters and Marlon Humphrey, not to mention a revamped defensive line after trading for 5-time Pro Bowler Calais Campbell.

There are only a handful of games I can see the Ravens losing, one of which is their clash with the Steelers on Thanksgiving night. This game certainly is reminiscent of the “Immaculate Extension” on Christmas of 2016, and I think the outcome will be the same some 4 years later.

Baltimore should, once again, finish near the top of the AFC and coast through its schedule. The biggest question, however, will be if Jackson can finally garner his first career playoff win.

The Ravens are my 1 seed in the AFC. They’ll be the only team in their conference with a first-round bye under the CBA’s new guidelines.

I personally believe Ben Roethlisberger will come close to his 2018 form, though a large portion of his season depends upon his ability to develop chemistry with young receivers James Washington and Diontae Johnson. Even if Roethlisberger plays below average, which seems unlikely, it will still certainly be an upgrade over the tandem of Mason Rudolph and Devlin Hodges. Plus, Roethlisberger’s overall experience and improvisation ability should help revolutionize Pittsburgh’s offense from one of the worst in the league to around the top 20 mark.

Moreover, it’s hard to envisage JuJu Smith-Schuster continuing his 2019 woes. I think he’ll easily have a better season due to both missing fewer games because of injuries and not having to carry nearly as much weight due to the prominence of Washington and Johnson. However, I worry about James Conner’s durability, though the Steelers have depth at running back.

Turning to the other side of the ball, this is very possibly the number one defense in the NFL. It’s loaded at every single level with Defensive Player of the Year candidates in T.J. Watt and Minkah Fitzpatrick alongside stars Cameron Heyward, Stephon Tuitt, Bud Dupree, Devin Bush, Joe Haden and Steven Nelson.

Some may be surprised I have the Steelers losing to the Eagles at home. This game very much reminds me of when the Cowboys came into Heinz Field and won a thriller, as the Eagles and Steelers are very even in multiple areas. Pittsburgh very well may end up prevailing in this one, but for realism purposes, I’ll chalk it up as a loss to the Steelers.

The same could easily be said about the Steelers’ Week 17 clash in Cleveland’s FirstEnergy Stadium. Consider, though, that Pittsburgh is 0-1-1 in its last 2 dates with the Dawg Pound on the road.

In a conference which only has 2 true leviathans in Kansas City and Baltimore, Mike Tomlin’s team should be viewed as a legitimate threat to reach the AFC Championship game. I have the Steelers as my first Wild Card team and the 5th seed in the AFC.

There is no doubt the Browns are truly stacked on offense with elite players like Nick Chubb, Odell Beckham, Jr., Jarvis Landry and the nascent Austin Hooper. Baker Mayfield, likewise, should rebound from his sophomore slump after the Browns added offensive tackles in draftee Jedrick Wills and free agent acquisition Jack Conklin.

At the same time, new head coach Kevin Stefanski may be challenged by a subpar linebacker group that witnessed the departure of standout Joe Schobert.

Schedule-wise, the Browns have a tough road slate, but they should fare well at home. I anticipate Beckham to flourish in his return to MetLife Stadium against the Giants, but I have a feeling the Jets will get redemption after getting demolished by Cleveland on “Monday Night Football” last year.

The Browns had an outstanding offseason once again, especially after former LSU safety Grant Delpit fell into their lap in the second round of the draft, but I continue to doubt how Stefanski will manage a multitude of intense, explosive personalities during a year which will presumably be topsy-turvy. In the end, I think the Browns will just miss the postseason.

The Bengals, like their in-state rival Browns, had a phenomenal offseason.

It certainly would have been hard to pass up on 2019 Heisman Trophy winner Joe Burrow, and the selection of Tee Higgins could prove to be A.J. Green’s replacement in several years.

For the first time in what seemed like an eon, owner and general manager Mike Brown opened his pocketbooks and splurged on the defensive side of the ball by signing defensive tackle D.J. Reader as well as cornerbacks Mackensie Alexander and Trae Waynes.

The Bengals have a great young nucleus, albeit one which could be tainted if stellar running back Joe Mixon elects to hold out.

A key cog in the group is offensive tackle Jonah Williams, who will see his first moments of NFL action after tearing his labrum in minicamp in 2019. Williams should help to ameliorate an offensive line that permitted a whopping 48 sacks, which tied for 24th in the league.

The Bengals are capable of knocking off solid squads like the Colts, Browns and Titans, as I have them doing in Weeks 6-8, but they likely will earn yet another top 10 pick in next year’s NFL Draft due to playing at least 8 games against teams which are presumable playoff picks.