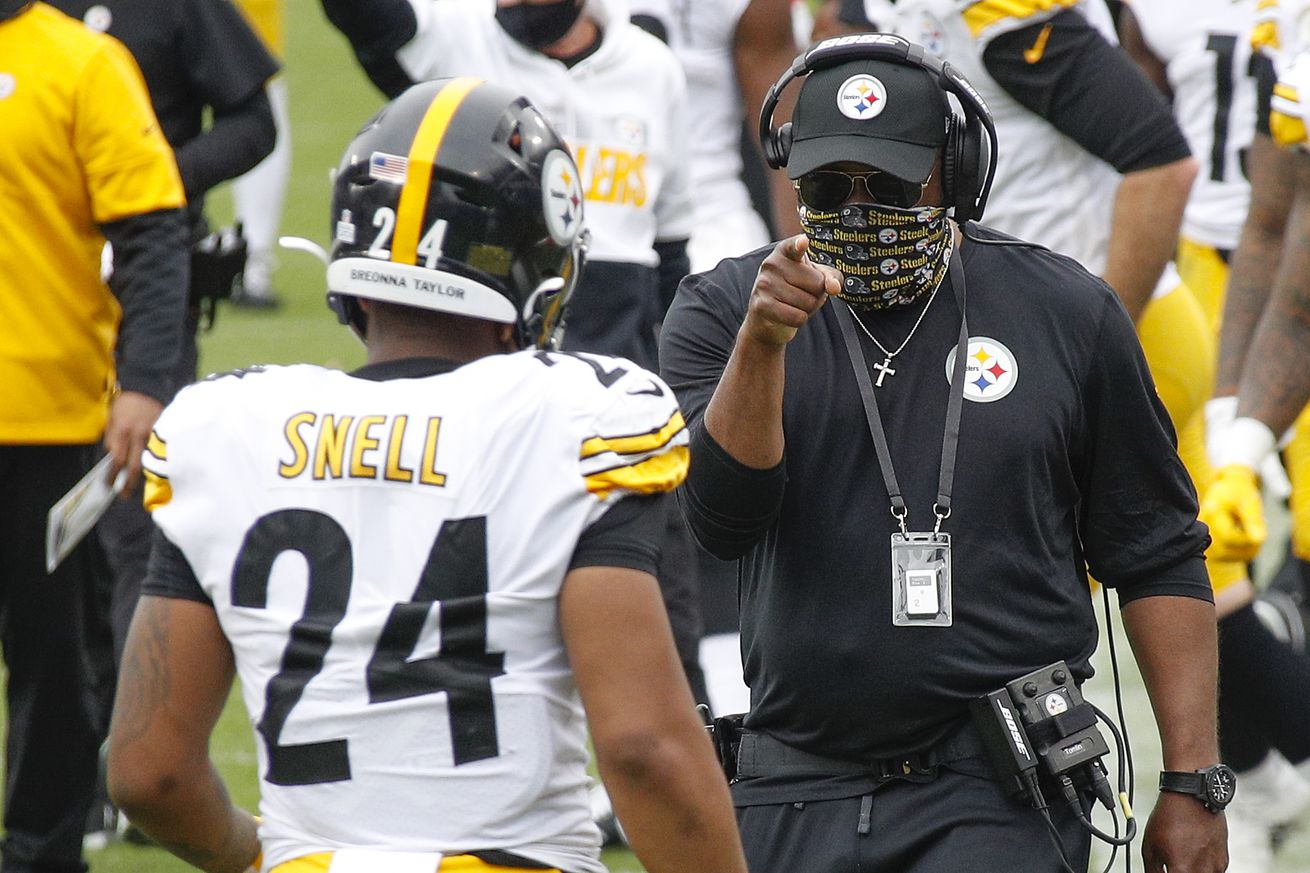 Now that we have officially reached the halfway point of the Steelers season, let’s see how the bold predictions I made in July have aged.

On July 18th, I released a list of my 5 bold predictions for the Steelers this season. I was optimistic that a number of Steelers players would break out and live up to the expectations that Steelers nation has for them and so far, I haven’t been disappointed. Considering that the team is undefeated and two games ahead of the Ravens in the race for the AFC North title, there’s little room for anyone to complain about the team’s performance. That being said, let’s examine how my bold predictions have played out so far, and if any of them have a chance to hit here in the second half of the season.

Prediction 1: James Conner rushes for over 1,300 yards and makes the Pro Bowl

Despite an atrocious Week 1 performance against the Giants, James Conner has been playing very solid football this year. His 4.4 yards per attempt are fairly pedestrian, but his workhorse volume has him currently eleventh in the league in total rushing yards with 520. In addition, he is tied for seventh in rushing touchdowns with five. Perhaps the most promising statistic is that Conner has not yet lost a fumble, something he has struggled with in past seasons.

Unfortunately, even though Conner is playing some of the best football of his career these numbers would be unlikely to earn him a Pro Bowl nod. Just two weeks ago he was on pace for over 1,200 rushing yards but after back to back modest performances, he now looks to finish with just above 1,000. Conner would need to put on an absolute show and average about 100 yards per game throughout the final eight weeks to reach the 1,300 yard mark I set for him back in July. There is almost no chance that this happens, especially considering how much success the Steelers have found when using their five-wide set that involves no running backs at all.

Still, I’ve been impressed with what I’ve seen from the forth-year running back. In a contract season he has stepped up and become the bell-cow back the Steelers have needed.

Like my first prediction, this one seems doomed to fail, but for completely different reasons. I’m still optimistic Smith-Schuster will reach four digits given his increase in workload the past few weeks. He is currently on pace for just under 900 yards but each game he seems to become a more and more integral part of the offense, and I don’t think it will be long until we see him consistently have 100 yard performances.

Diontae Johnson is a different story.

When he has been healthy, he has shown flashes of the talent we saw last year. Unfortunately, injuries have caused him to miss multiple games, leaving him with just 310 receiving yards on the year. There is still time for him to turn things around and have a truly great season, but it seems unlikely that he will reach 1,000 yards due to the real reason this prediction will not hit: Chase Claypool.

No one could’ve predicted the impact that Claypool would have in his first year with the team. Entering an offense that already had three solid receivers and two good tight ends, Claypool has fit in perfectly, earning himself more and more playing time each week. He currently leads the team with 444 receiving yards and has a great shot to get to four digits by the end of the year. At this moment in time, it seems very possible that the Steelers will have two 1,000 yard receivers who “establish themselves as an elite duo” as I said in my article, it just won’t be the two I predicted.

Prediction 3: The offensive line sends 0 players to the Pro Bowl

Unfortunately, the 2021 NFL Pro Bowl was cancelled due to the ongoing pandemic. The NFL decided that hosting the game was unnecessary and posed risks to the health of the players and coaches. Still, we can still imagine who would likely make it and who would not.

As I predicted, Maurkice Pouncey’s play has not lived up to that of past years. While he has been holding up well in protection, too many of his snaps are falling short of the QBs hands to merit a Pro Bowl selection. According to PFF, David DeCastro’s play has also declined and if the season ended today he would have the second lowest grade of his career.

That being said, the offensive line’s play as a whole has been solid to say the least. There hasn’t been the drop off I expected to see coming into the year. The Steelers have allowed just ten sacks, good for second best in the league, and have created solid holes for the running backs in all but one or two games. The impressive play of youngsters Kevin Dotson and Chukwuma Okorafor and the veteran presence of Alejandro Villanueva and Matt Feiler (and the other two I mentioned above) have allowed this unit to remain among the better groups in the league. While I am not certain that any one player has played well enough to earn Pro Bowl honors, it seems likely that DeCastro and maybe Villanueva would make it based on name alone.

Prediction 4: The defense sets a franchise record for sacks in a season

Yet again the Steelers have found themselves among the league leaders in sacks. In fact, they are currently leading the NFL with 32 takedowns of the quarterback. If they continue their current rate, Pittsburgh will finish with 64 sacks, destroying the previous franchise record of 56. While they have slowed down somewhat in recent weeks, it still seems likely that the Steelers will be able to reach the mark they set back in 2017. The combination of T.J. Watt and Bud Dupree at outside linebacker continues to be lethal while Vince Williams and Mike Hilton help bring the heat from the second and third levels respectively.

What has put this unit over the top is the return of Stephon Tuitt, who currently has 6 sacks to go alongside 17 QB hits. With Tuitt and Cam Heyward on the inside and a slew of elite pass rushers around them, the Steelers have been able to wreak havoc in the backfield of almost every team they have played. As long as the defense stays healthy, they should be able to demolish the old franchise record. Heck with two games left against the Bengals, this team could challenge the NFL record of 72 sacks in a season set by the 1984 Chicago Bears.

Despite looking like the most unlikely of my predictions to take place back in July, it now seems like there is at least a decent chance it hits. Ben Roethlisberger’s return has been nothing short of brilliant and the fact that he has this team at 8-0 shows just how crucial he is to their success. By using lots of short and quick passes Ben has eliminated most of the mistakes that plagued his play in the past. His only competition for Comeback Player of the Year now is Alex Smith, but if the Steelers can continue winning at the rate that they are, Roethlisberger should run away with it.

T.J. Watt also has a great chance to take home Defensive Player of the Year. He continues to sack the quarterback at a solid rate and is currently tied for forth in the league with seven. What sets T.J. apart, however, is his ability to disrupt the play even when he can’t record a sack. He leads the league in both pressures and QB hits by a significant margin and is second in tackles for a loss behind only teammate Vince Williams.

According to Odds Shark the youngest Watt brother currently has the second best chance to win DPOY, an award he is sure to be in the running for for years to come. In addition to these two players, a few other Steelers have a shot at taking home awards at NFL Honors. Chase Claypool’s impressive start to his career has him in the running for Offensive Rookie of the Year, and Mike Tomlin seems to be the unanimous favorite for Coach of the Year. As long as Pittsburgh can continue to compete at a high level, there’s a good chance that at least two of these Steelers can win awards come the NFL Honors ceremony.

Overall my predictions haven’t been too bad given they were supposed to be bold and therefore unlikely to be correct. Based on what I’ve seen so far, I expect two out of the five to work out by the end of the season. Do you agree? Let us know in the comments.