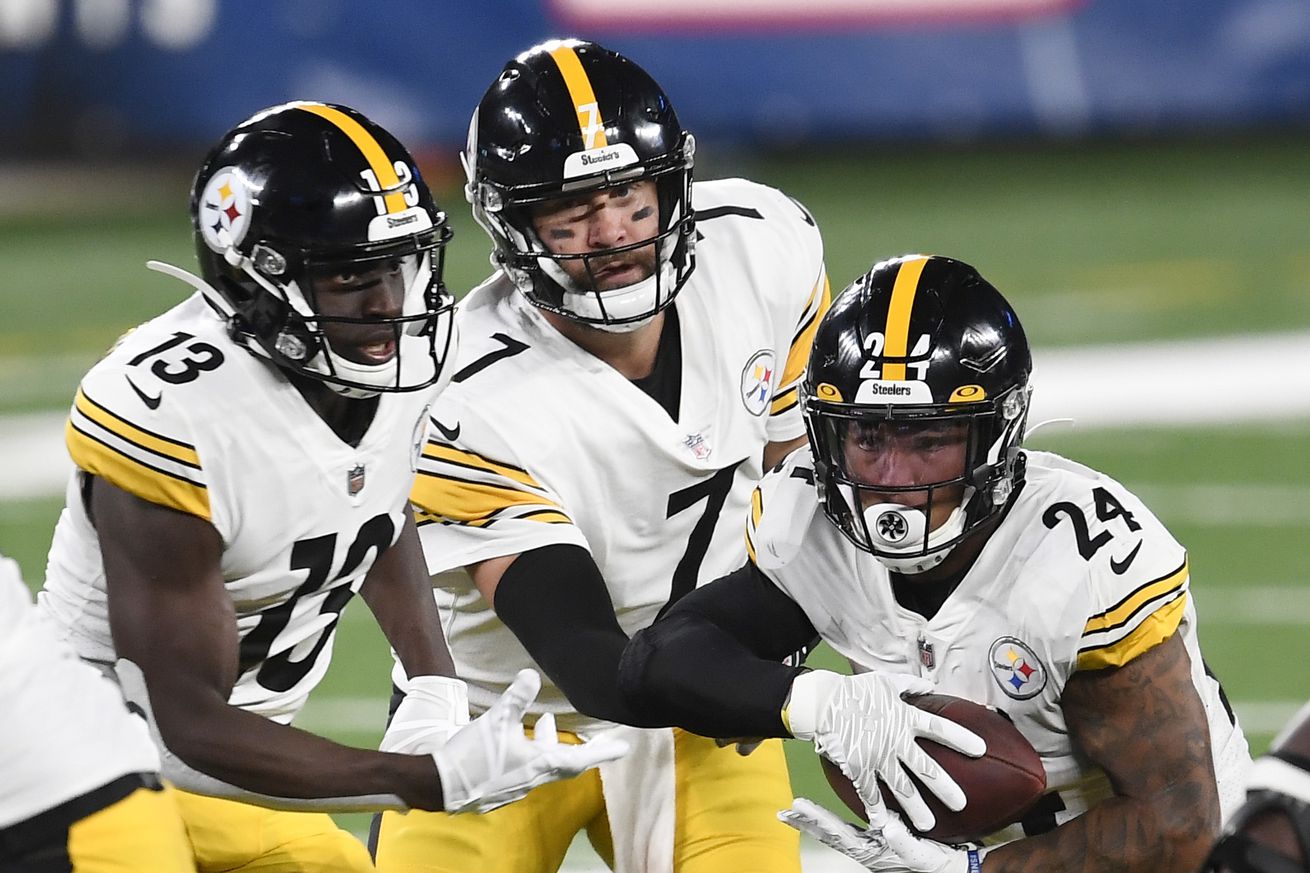 It was a very balanced attack in Ben Roethlisberger’s return.

So here are some of the numbers which helped lead to the Steelers win on Monday night at the Meadowlands.

Pittsburgh Steelers had a very balanced attack on Monday night where they had 30 rushing attempts and 34 pass plays. Of course, these numbers could be tweaked just a little bit as the Steelers attempted 32 passes and quarterback Ben Roethlisberger was sacked twice. Additionally, during the first drive of the game, Ben Roethlisberger dropped back to pass and actually threw the ball backwards to James Conner which made it rushing play.

Regardless, it was the first time the Steelers had 30 official rushing attempts in a game with Ben Roethlisberger as quarterback since Week 10 of 2018 against the Carolina Panthers.

There were several reasons the Steelers rushed the ball so much on Monday night. First, they were winning the game in the second half. Second, Benny Snell Jr. rushed the ball very effectively as he had 113 yards on 19 carries. Yes, Snell did have one fumble after a 21-yard gain, but fortunately teammate JuJu Smith-Schuster pounced on the ball and the Steelers kept possession.

One key play early in the game was the first NFL reception by Steelers 2020 second-round draft pick Chase Claypool. With Roethlisberger throwing the ball to the sidelines, it was a 28-yard completion where Claypool did an excellent job of getting his feet down inbounds and securing the ball. Not only was it impressive as his first catch, it was the Steelers first third down conversion of the game on a 3rd & 9 on their own 33 yard line.

One of the biggest keys to the game for the Steelers was containing running back Saquon Barkley. With Barkley only gaining 6 rushing yards on 15 attempts, saying the Steelers contained the former number two overall draft pick would be an understatement. In fact, if it were not for a pass play where the ball actually travel backwards to Barkley and he gained 7 yards, he would’ve ended the night with a negative rushing total.

The Steelers extended two league-leading strikes on Monday night. The first one is not one they want to be known for which is 24 straignt games with at least one turnover. Ironically, this occurred before the offense even stepped foot on the field when Diontae Johnson muffed the first punt of the game.

The other streak which continued for the Steelers was 58 regular season games with at least one sack. In all, the Steelers had three sacks on the night with one each by Vince Williams, Stephon Tuitt, and Mike Hilton.

The Steelers managed to force two turnovers against the Giants, and both were interceptions by members of the defensive front. The Steelers two defensive captains of T.J. Watt and Cameron Heyward each managed to get an interception in the game. For Heyward, it was the first of his career.

It was expected by most fans for the Steelers to have some sloppy play with no preseason games in order to prepare. But when it came to penalties, the Steelers were only officially flagged 3 times for 21 yards.

Technically there was another penalty against the Steelers when Chris Boswell had a kickoff out of bounds where the Giants were awarded the ball at the 40 yard line, but it officially does not go into the books as a penalty. The only penalty on the offense was a delay of game penalty when the Steelers thought the play clock had reset. Ironically, it went into the books as a 4-yard penalty because they were facing a 3rd & 1 which was really 3rd & inches. Once the 5 yards were marked off, it turned it into a 3rd & 5 so the statistics mark it as a 4-yard penalty.

The other two penalties on the Steelers were a 12-yard pass interference on Joe Haden which should not have been called, and a 5-yard defensive holding against Steven Nelson late in the fourth quarter.

Although this had nothing to do with the Steelers’ win on Monday night, it’s such an encouraging number it needed to be included. After waiting 260 days between games, there is only 6 days until the Steelers face off against the Denver Broncos on Sunday at 1 PM.

So there are some numbers to help evaluate the Steelers’ performance Monday night against the Giants. While it took the Steelers some time to get going and gain the lead, eventually the numbers balanced out and the Steelers cruised to a 10-point victory even after giving up a late garbage-time touchdown.

Were there any other numbers which stood out to you? Please leave your answers in the comments below.