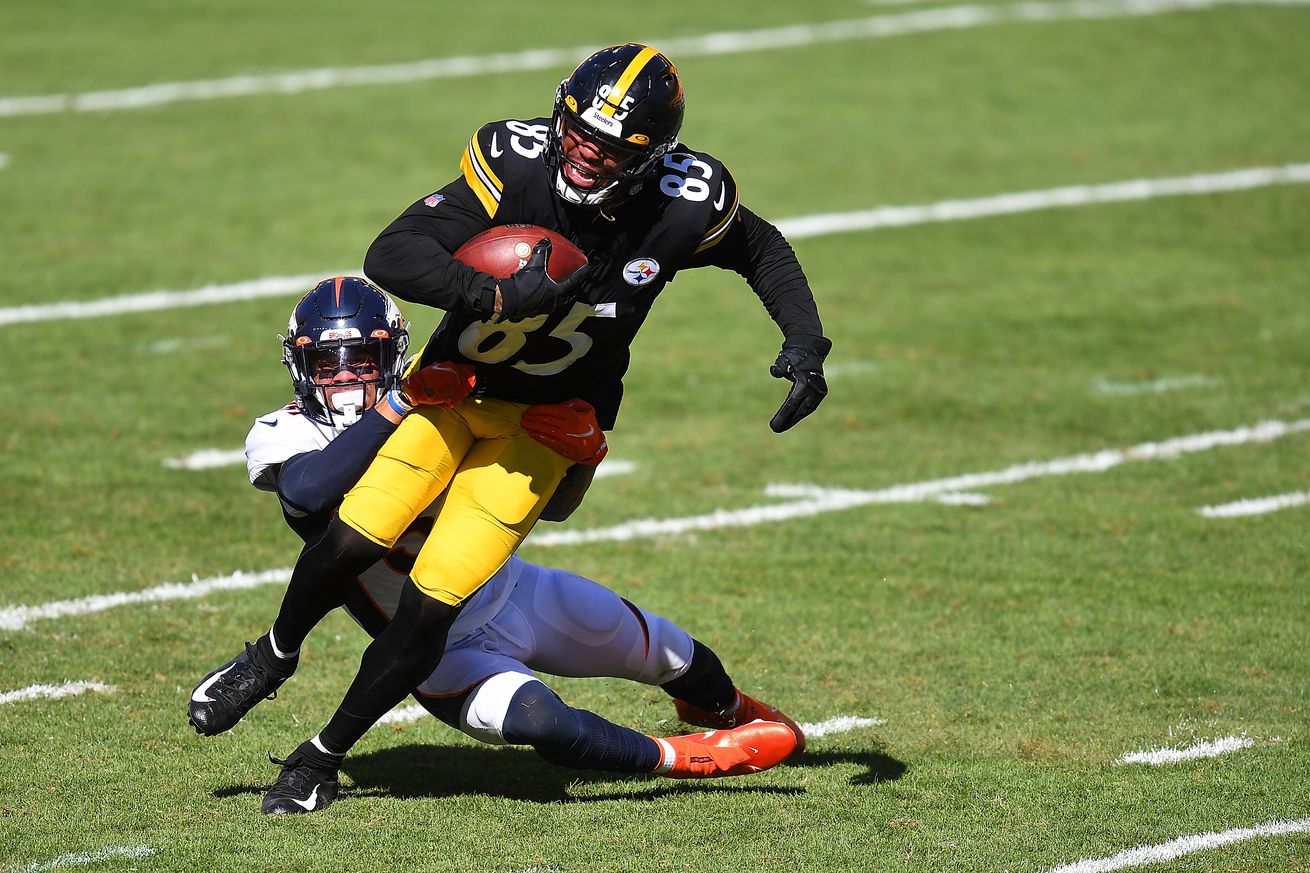 The newly acquired tight end has yet to make a real impact, but Ben Roethlisberger knows the best is on the horizon.

This offseason when the Pittsburgh Steelers acquired free agent tight end Eric Ebron, fans were left in awe wondering how the connection between Ebron and Ben Roethlisberger would develop. After all, the Steelers haven’t had an athletic tight end like Ebron since Ladarius Green’s short stint with the team. And, of course, fans know the connection Roethlisberger had with Heath Miller prior to his retirement.

With that said, after two weeks the Roethlisberger-to-Ebron connection is rather mundane. Thru two games, here is what Ebron’s numbers look like in a black-and-gold uniform:

I don’t think anyone expected Ebron to walk into the door and immediately gel with Roethlisberger, especially with no physical offseason work done, but it is safe to say fans expected to see more from the tight end.

The plain, and simple, truth is Ebron just hasn’t had the ball thrown to him that much, but that might be changing sooner rather than later. During his typical Wednesday press conference, Roethlisberger noted how the offense hasn’t hit their stride yet, and that would include Ebron’s production.

But the team is winning, so no one is complaining about individual statistics or accolades.

In his virtual press conference on Wednesday, Roethlisberger was asked about the use of his tight ends.

“Yeah, I mean, both tight ends we are keeping a close eye on. Like I said, we just haven’t really hit our stride offensively yet where we have done a ton of no huddle. I think they get involved a lot in the no huddle stuff. We haven’t done a ton of that yet. I also think there have been some plays that have been called for those guys that have just been covered. None of us are panicking. We know how special both of our tight ends are. They make the big plays when we need them.” Roethlisberger stated.

Fantasy Football owners who thought Ebron would bring a new dynamic to the Steelers’ offense have been highly disappointed, but Roethlisberger reminded those owners, and Steelers fans around the globe, they shouldn’t be panicking about Ebron’s productivity, or lack thereof.

It is still early.

“I think there’s no reason to panic when it comes to how much E [Eric Ebron]’s involved or not involved.” Roethlisberger said. “They’ve done a good job of keeping a close eye on him, and offensively, we haven’t really hit our stride yet. So that’s OK. As long as we are winning football games, that’s the most important thing.”

So, what should fans expect in the future? They should expect the tight ends to become more of a focal point in the offense, and that means there will be more passes headed to not just Ebron, but also Vance McDonald.

“They’re going to get their balls and their touchdowns I’m sure.” Roethlisberger said.

Specifically in Week 2, it might have seemed as if Roethlisberger was “off” a bit, and not just when targeting the tight ends. After watching the film, Roethlisberger told reporters he was getting lazy with his mechanics, mainly his feet, which then resulted in him not having proper throwing mechanics.

Some of these small factors can be the difference in success and failure when it comes to a quarterback, and something Roethlisberger is determined to fix during practice this week leading up to the Week 3 game vs. the Houston Texans on Sunday.

“I do feel I got a little lazy with my feet, which then, in turn, translated to a lazy arm.” Roethlisberger added. “There were some throws that I kind of dropped my elbow, if you will. I don’t want to get too technical, but it became more of a three-quarter release instead of an over the top when I didn’t need to. There are obviously times you have to change your release point. There were too many throws, I felt looking back, that I just have to get my feet working better, and that will then translate, hopefully, to the rest of the body. Then, I won’t be guiding some of the throws.”

The Steelers are 2-0, and you won’t hear many crying about this simple fact, but improvement is still necessary as they prepare for Week 3. Stay tuned to BTSC for the latest news and notes on the black-and-gold as they continue to roll through the 2020 regular season.