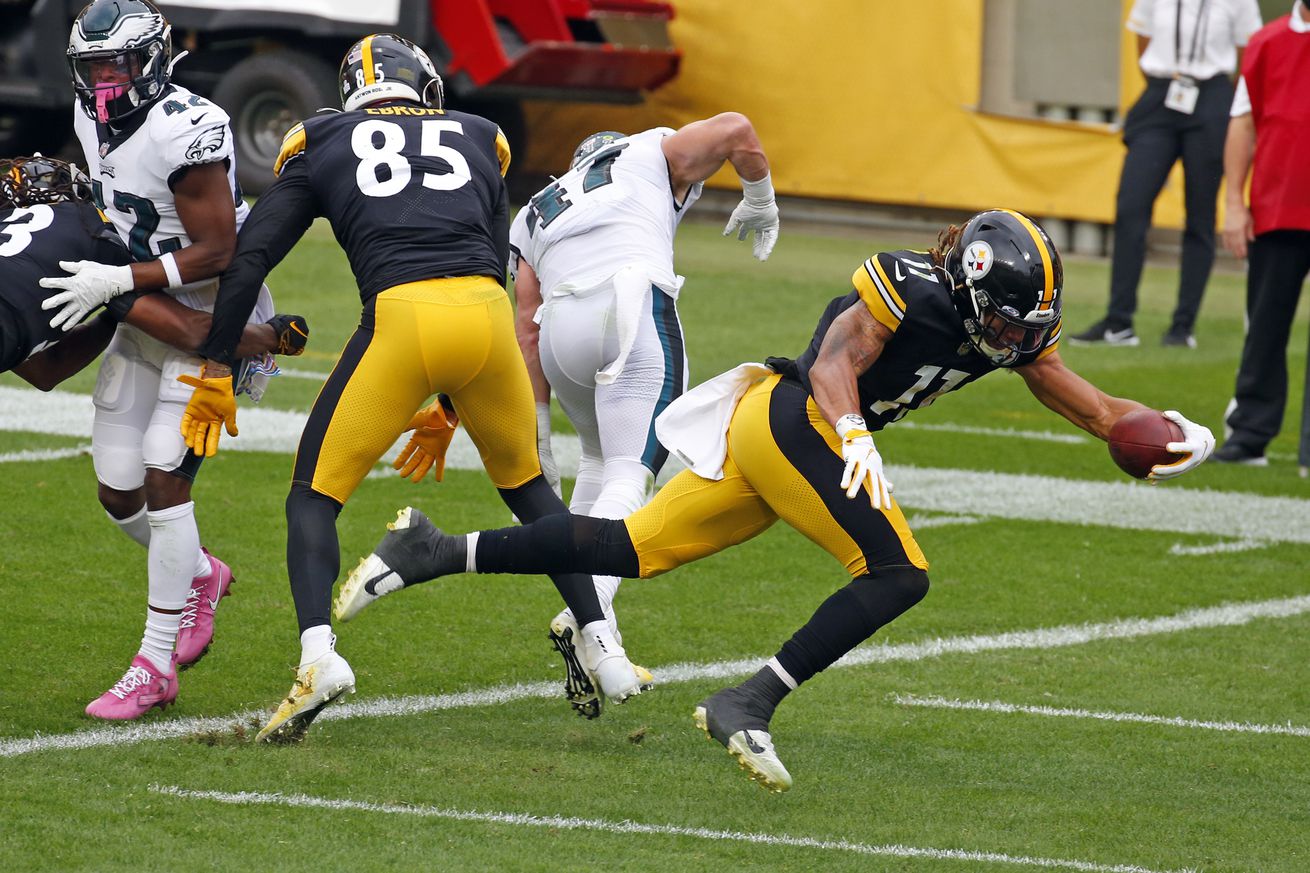 The Steelers were able to gut out a win vs. the Eagles in Week 5, advancing their record to 4-0.

It had been a rough road for the Pittsburgh Steelers since their last game in Week 3, a victory over the Houston Texans. Their schedule dictated they would hit the road in Week 4 and play the Tennessee Titans, but a COVID-19 outbreak changed those plans. In lieu of the game the Steelers saw their bye week bumped from Week 8 to Week 4.

After the extra week, the Steelers hosted the Philadelphia Eagles in Week 5 for their third straight home game, and after winning the coin toss Mike Tomlin elected to kick the ball to the Eagles, deferring their possession to the start of the third quarter.

Carson Wentz and company weren’t able to net a single yard before a T.J. Watt sack on 3rd and 10 forced a punt, and a quick three and out.

After Ben Roethlisberger took the Steelers’ offense near midfield with a completion to Eric Ebron, a second down sack killed the drive in its tracks and Dustin Colquitt was called on for his first action of the game.

Another three and out for the Philadelphia offense gave the Steelers tremendous field position for their second drive of the game. Ben Roethlisberger was able to convert several big third down conversions to get the offense into field goal range, and a defensive pass interference call put the Pittsburgh offense in a first and goal situation.

Malik Jackson was called for a dead ball personal foul penalty, giving the Steelers a fresh set of downs, and on the second play from scrimmage Chase Claypool took the jet sweep handoff and plunged into the end zone for the first score of the game.

What can’t Chase Claypool do?

The Chris Boswell point-after was good, making the score 7-0 with 1:04 left in the first quarter.

The Eagles’ next drive had tremendous success when on third down a draw to Miles Sanders went the distance, 74 yards, for the touchdown. The extra point tied the game 7-7 to end the first quarter.

Needing an answer, the Steelers responded quickly. After a two nice runs by James Conner, Ben Roethlisberger hit Chase Claypool in stride and the rookie sprinted into the end zone for his second touchdown of the game.

Boswell’s point after was good, making the score 14-7 Steelers with 11:49 left in the second quarter.

Carson Wentz and the Eagles’ offense started to wake up in the second quarter, and it didn’t take them long to move into striking distance. Aided by a roughing the passer call on Vince Williams, it was Mile Sanders hitting pay dirt for the second time in the game to tie the game 14-14 with 6:17 left in the first half.

Looking for a time consuming drive which results in points, the Steelers were able to use a defensive pass interference call and some nice James Conner receptions to move into field goal territory. Unfortunately, that is where the drive would end and the team would have to settle for a Boswell 41-yard field goal. The kick put the Steelers up 17-14 with 1:57 left in the half.

The score would stand heading into half.

The Steelers got the football to start the second half, and Ray-Ray McCloud took little time making the next big play for the home team. On a reverse McCloud scampered 58 yards to put the offense in a first and goal situation. Two plays later and it was a hat trick for Chase Claypool. The rookie caught a quick hitting pass and rumbled into the end zone.

With Philadelphia facing their first two score deficit of the game, Wentz made an ill-advised pass on their first series which was intercepted by Steven Nelson.

They started this play wit.
Now they are witout.

Pittsburgh wasted little time adding to their point total. After a defensive pass interference call put the ball on the one yard line, James Conner took care of the rest and punched the ball in for the Steelers’ fourth touchdown of the game. Boswell’s extra point was good, and made the score 31-14 with 10:32 left in the third quarter.

Down 17, Wentz and company took to the air, and saw immediate success. A defensive pass interference call against Joe Haden set up Philadelphia in the red-zone, and Wentz hit Greg Ward for the touchdown. The Eagles elected to go for a two-point conversion, and it was successful making the score 31-22 with 5:58 left in the third quarter.

For just the second time in the game, the Steelers were unable to add points to their total, and Dustin Colquitt had to punt the ball back to the Eagles. Wentz’s offense remained red-hot, and mainly to wide receiver Travis Fulgham. The methodical drive resulted in a Fulgham touchdown making the score 31-29 with 11:27 left in regulation.

Ben Roethlisberger and the Steelers’ offense took over and looked as if they were not going to be stopped from adding to their total, but an offensive pass interference call turned into an Eric Ebron fumble on 3rd down giving the Eagles tremendous field position only down two points.

Philadelphia moved the ball past midfield, but on 3rd and 5 it was Joe Haden who came up with the pass break up and forced a key fourth down decision. The Eagles elected to go with a Jake Elliott 57 yard field goal, which sailed wide right, giving the Steelers great field position with 3:18 left in regulation.

The Steelers moved the ball quickly into field goal range, but on 3rd and 8 Roethlisberger hit Claypool, again, for his fourth touchdown of the game.

The Boswell extra point was good, which made the score 38-29 with 2:59 left in the fourth quarter.

Philadelphia’s offense wasn’t able to muster a first down, and as Wentz went deep on fourth down his pass was intercepted by Steven Nelson, his second of the day, essentially ending the game.

The 38-29 score would hold as Pittsburgh hit the victory formation.

The Steelers’ win moves their record to 4-0 on the season as they now turn their attention to their first division game of the year when the Cleveland Browns visit Heinz Field in Week 6. Stay tuned to BTSC for the latest news and notes surrounding the Steelers as they continue to roll through the 2020 regular season.