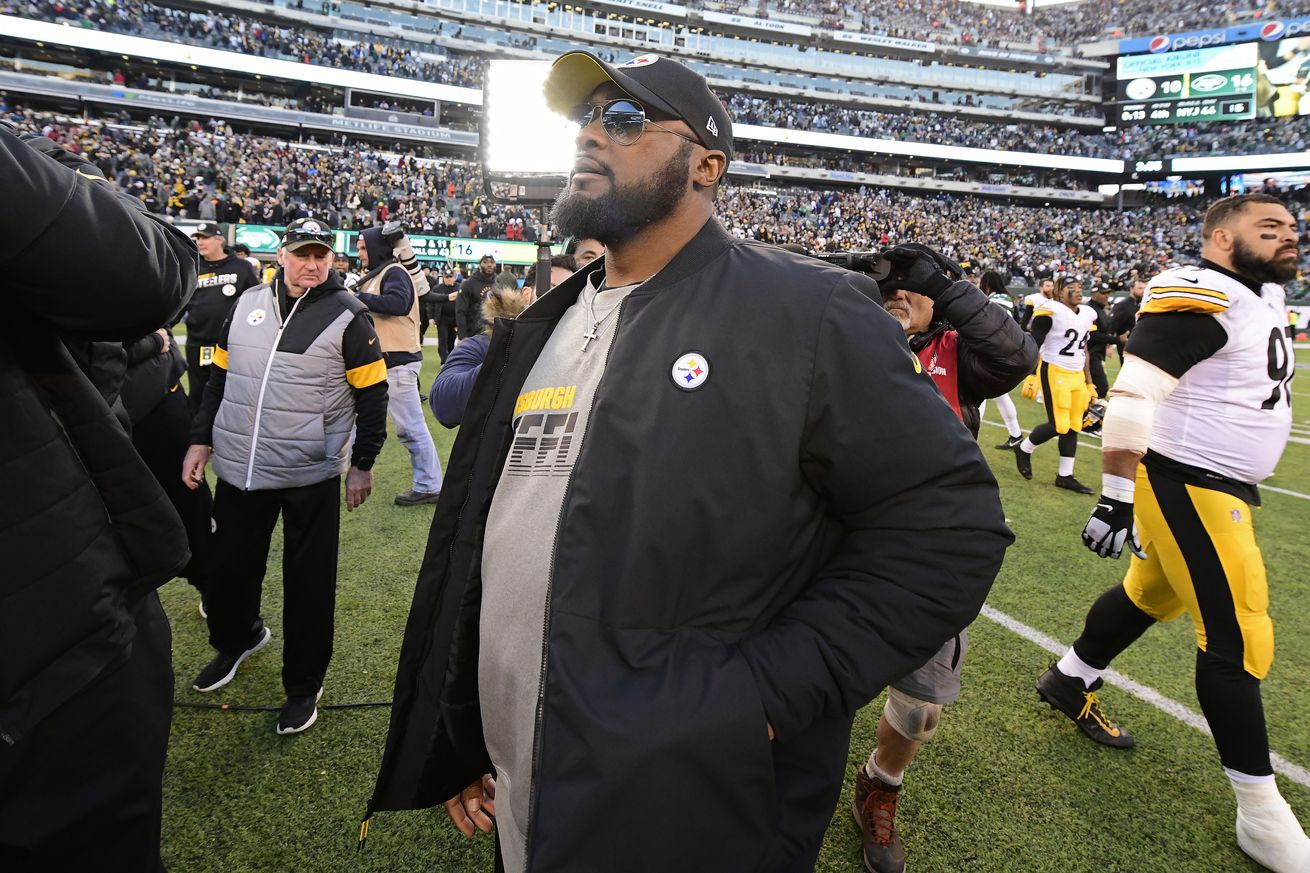 Looking beyond the record for the 2020 Pittsburgh Steelers.

The 2020 Pittsburgh Steelers have already cemented their place in the franchise record books. No Pittsburgh Steeler team had ever gone 8-0 before, and this 2020 team will forever be the new standard for the first half of a season. No team can be better than undefeated, and it is a remarkable feat to pull off.

But how does this team compare to other Steeler teams outside of the win and loss record? Obviously wins and losses are the most important number, but that doesn’t make it any less interesting to see how they compare in other areas. For this article, I’m going to look at statistics, comparing the 2020 Steelers to each team in franchise history since 1940, when the team changed their name to the Steelers. Looking at the statistics through the first 8 games of each season.

The fewest points allowed in the first 8 games of a Steeler season came in the year 2000, when the Steelers allowed 84 points, 10.5 points per game. The 2020 Pittsburgh Steelers have allowed 161 points, which ranks 44th in franchise history. The Steelers rank 5th in the NFL in points allowed in 2020, in 2000 161 points would have ranked 13th.

Obviously scoring has gone up in the NFL over the years, and it may surprise you to know that one of the Steelers teams that made the Super Bowl allowed more than 161 points through the first 8 games of their season. That was in 1995, when the Steelers allowed 174 points and started 4-4 before going 7-1 in the second half of the season on their way to making the Super Bowl.

In comparison the 2019 Steelers gave up more than 20 points 5 times in their first eight games, losing 4 of those while beating the Indianapolis Colts 26-24. The 2020 Steelers have given up 21+ points 4 times this season, and are undefeated in those games.

In fact, the 2020 Steelers are already tied for the most games won when they give up at least 24 points, with 3 wins. Only three Steeler teams have ended a season without losing a game in which they gave up 24 or more points. The 1982 and 1974 teams were 1-0 in those games, while the 1946 team is the only team to not allow 24 points in a game for a whole season, the highest point total reached by a Steeler opponent that year was 17.

The most yards ever allowed by a Steeler defense through 8 games was in 1952, when the Steelers gave up 3031 yards in 8 games. The 2020 Steelers, in comparison, have given up 2539 yards, the 24th highest amount in franchise history, and the 5th lowest in the NFL this season. In the last 10 years only the 2011, 2012 and the 2017 defenses have allowed fewer yards, making this year the 2nd best defense in yards since Casey Hampton was still on the team and before James Harrison went to the Bengals.

The franchise record for most interceptions after 8 games is a tie between the 1973 Steelers and the 1954 Steelers, both with 21. The 1954 Steelers started 4-1 before going 1-6 the rest of the season, and their interception total was boosted significantly in their week 4 win over the Cleveland Browns when they intercepted Otto Graham 5 times (6 interceptions on the day). Wouldn’t it be nice if Joe Burrow could live up to that version of Otto Graham in week 10?

Fumbles are far more random that interceptions, and while the 2019 Steelers recovered 11 fumbles for turnovers in the first 8 games, tied for 11th most in franchise history, the 2020 Steelers have only recovered 4, tied for 8th fewest. The franchise record is 16 fumbles recovered, in a first place tie between the 1976 and 1940 Steelers.

Since the 1976 Steelers, only three Steeler teams have recorded 10 or more turnovers from fumbles, the 1983, 2010, and 2019 Steelers. It stands out that all three of those teams exceeded expectations before ending their season disappointingly.

Passing and rushing yards aren’t as interesting from a defense over time perspective, as it reflects much more the changes in the league than the quality of the defense, even more so than the numbers talked about above.

But I did want to include this chart, comparing three recent Steeler seasons though 8 games. We remember the end of the 2017 season and the disappointment, but it is good to remember just how good that defense was before Ryan Shazier was injured, and also nice to see how this 2020 defense that many consider disappointing stacks up to the juggernaut defense of 2019.

The 2020 Steelers are the highest scoring team in franchise history through 8 games, with an 8 point lead on the 2018 Steelers and a 30 point lead on the 2014 Steelers that were one of the best Steeler offenses we’ve seen. The Steelers have done a lot of that scoring through the air, and this team is tied with the 2016 Steelers for the 2nd most TD passes through 8 games. The number one team on the list is the 2007 Steelers, a team that shows up incredibly well on both the defense and offense lists for one of the most dominant first 8 games of any Steeler team.

The 2020 Steelers have only thrown 4 interceptions, only the 2000 (2) and 2014 (3) Steelers threw fewer over their first 8 games. Combine their high ranking in touchdown passes and low number of interceptions thrown and you get a +14 Touchdowns to Interceptions gap that is tied for the best in franchise history with the 2014 Steelers.

The Steelers don’t rank quite as highly in passing yards, though, falling to 12th, directly behind the 1995 Steelers. Most of the seasons above them also involve Ben Roethlisberger. The 2020 season ranks tenth in passing yards during Ben Roethlisberger’s 17 year career. 2020 ranks 6th in passing attempts during Roethlisberger’s tenure as the Steelers quarterback, and right now his yards per pass attempt is the lowest of any season in which he’s played at least 2 full games (yes, that means it was lower last season before his season ended).

The Steelers passer rating is the 4th highest in franchise history through 8 games, trailing only the 2009, 2014, and the 2007 Steelers who take first place.

You probably expect the Steelers run game to look much worse than the passing game, and you would be right to expect that, but it may not be as bad as you expect.

The 2020 Steelers rank 57th in rushing yards in Steeler history. The 872 yards gained so far, however, is the highest total for this franchise since 2015, and the 9th highest of Ben Roethlisberger’s career, putting it right in the middle for the last 17 years. The highest rushing totals during Roethlisberger’s career came in 2004 (1286 yards) and 2007 (1204 yards).

The franchise record for most rushing yards in the first 8 games was set in 1949 when the three-headed rushing attack of Joe Geri, Jim Finks and Bob Gage accounted for 1558 yards as they carried the Steelers to a 4-3-1 record. Second place goes to Franco Harris and Rocky Bleier in 1976 with 1556 yards, and third place goes to Kordell Stewart and Jerome Bettis in 2001, when Bettis had 886 yards through 8 games before his hip injury that started his decline from one of the best backs in the NFL.

The 2020 Steelers fare better in rushing touchdowns with 9, which puts them in a tie for the 22nd most in franchise history with 10 other seasons. Only the 2004 and 2018 Steelers have had more rushing touchdowns through 8 games in the last 20 years.

In total yards the 2020 Steelers rank 5th worst since the Steelers drafted Ben Roethlisberger. If you remove the 2019 season when he played less than 2 games, only three seasons with Ben Roethlisberger as the primary quarterback have seen fewer offensive yards gained than 2020.

Those seasons are 2005, 2008 and 2010. Those three years should stand out to you as the three years the Steelers and Ben Roethlisberger have played in the Super Bowl.

Compared to franchise history the Steelers rank 25th in total yards gained, with half of the teams ahead of them having Roethlisberger as the quarterback, and the other half without him.

First half lessons of history

As you just read, the worst total yardage years of Ben Roethlisberger’s Steelers career were the three years the Steelers went to the Super Bowl, a pretty clear message that the offensive yardage rankings don’t really mean much when the playoffs hit.

I want to focus more on a single season that stood out throughout the research for this article though, the 2007 Steelers.

Mike Tomlin’s first year started with a coach who was younger than some of his players coming in and asserting his command. They ran harder and hit more in training camp, and when the season started, they were dominant. Through 8 games the Steelers scored 222 points, 4th most in franchise history, 2nd most at the time. Ben Roethlisberger threw 20 touchdowns, the franchise record for most in the first 8 games, the Steelers ran for 1204 yards, 2nd highest total of Roethlisberger’s career and 21st best in franchise history. The Steelers 5.58 yards per play was higher than all but one year of Bill Cowher’s entire coaching career.

The 2007 Steelers rank first in franchise history in point differential through 8 games with a remarkable 124 more points than their opponents. They were 6-2 after 8 weeks. They would finish the season 10-6, going 4-4 in their last 8 games, including dropping 3 of the last 4 before losing in the weld card game to the Jacksonville Jaguars.

Since that season, Mike Tomlin’s teams have started slow. He has spoken about that season, and the lesson he learned when he had his team in mid-season form for week 1, only to see them wear down when the games mattered most.

Teams can look dominant in the first half, but often that only means they will wear out before the playoffs. The only things that matter early on in a season is health and your win/loss record. The Steelers have lost Devin Bush for the season, but they are 8-0, and haven’t played their best football yet.

If the pattern holds true, this team is going to play better as the season comes to an end, and hopefully will be playing their best football after the regular season ends.