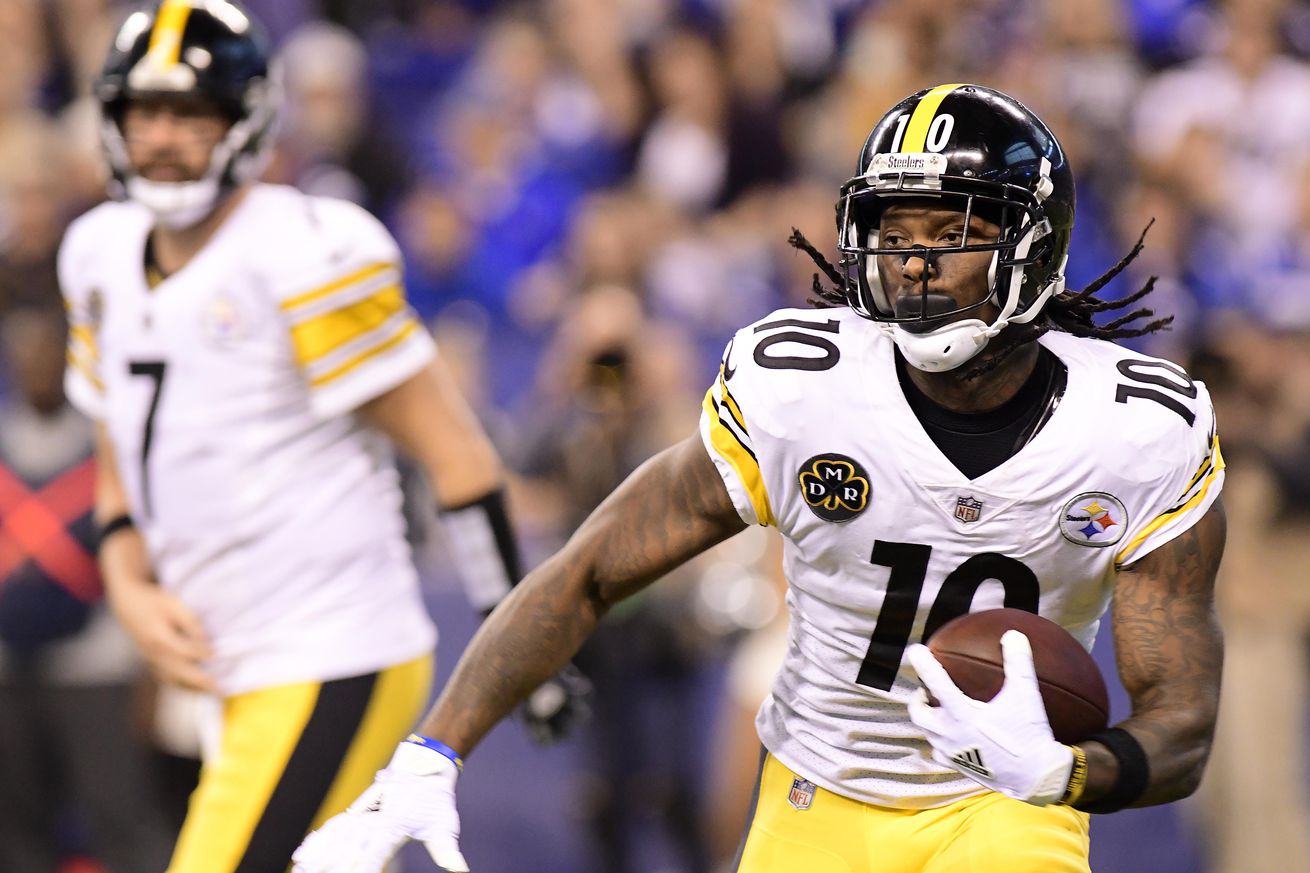 An in-depth look at how Ben Roethlisberger uses deep threats.

Today in the film room we are digging into a painful Steelers loss. In 2015 the Steelers made it to the divisional round of the playoffs to face the Denver Broncos, a team they had beaten four weeks earlier in Pittsburgh. Going on the road wasn’t the biggest difference from their first meeting, as the Steelers entered the game without their leading receiver or running back. Antonio Brown was injured in the Steelers win over the Cincinnati Bengals, and both Le’Veon Bell and DeAngelo Williams were out, leaving Fitzgerald Toussaint and Jordan Todman as the Steeler running backs.

We’re not here to dig into why the Steelers lost that game, I just want to remind everyone of how many players were hurt on that offense. The top 4 receivers for the Steelers in that game were Martavis Bryant, Markus Wheaton, special teams ace Darrius Heyward-Bey and rookie Sammie Coates, who had spent a total of 36 snaps on offense in the regular season, all before week 5, and hadn’t seen the field at all against Cincinnati.

The Steelers had an inconsistent but dynamic deep threat in Bryant, a decent depth receiver in Markus Wheaton, and two big, fast players who weren’t very good receivers at that point in their careers. Those four receivers would combine for 309 yards against a great Denver defense, the 13th best pass defense since 1988 by football Outsiders DVOA, the Steelers themselves have had a number of great pass defenses in that span, and only the 2008 defense ranks higher than the 2015 Broncos.

The Steelers 311 passing yards in that playoff game was the second most the 2015 Broncos would give up, the most they gave up was 354 yards, four weeks earlier to the Steelers when Antonio Brown was healthy. The Broncos gave up an average of 199.6 passing yards a game that season. In fact, outside of the two games they faced Ben Roethlisberger, the Broncos didn’t allow 300 yards passing in 2015, 2016 or 2017.

That’s why this game is significant when we talk about how well Ben Roethlisberger uses deep threats.

There is a certain amount of respect given to fast, effective deep threat receivers, and that respect shows up with defenders backing up farther and faster than they normally do. And that creates space. Space Ben uses well.

1st quarter, 8:50. Martavis Bryant is the receiver to the bottom of the screen.

Bryant throws a good outside release fake on the corner, and cuts inside as the corner turns to run with Bryant, leaving Bryant wide open on the slant. In classic Bryant fashion, he drops the wide open easy catch. But this shows the Broncos were thinking about Bryant’s speed and the threat he and Roethlisberger bring to the field. Notice the Broncos are in cover-1, that corner can’t get beat outside, he’s got no help behind him.

3rd quarter, 1:30. Sammie Coates is the receiver to the top of the screen.

Sammie Coates starts to win this route, and Ben throws the ball as soon as Coates is even with the corner. The Broncos are again in cover-1, and the corner smartly grabs Coates and pushes him out of bounds for a 12 yard pass interference penalty. Coates didn’t make a great move, and he wasn’t a good receiver at this point, but the Broncos would rather take a penalty than risk him and Ben Roethlisberger making a play.

1st quarter, 3:17. Martavis Bryant is the receiver to the bottom of the screen.

This is almost certainly an adjustment made by Ben Roethlisberger and Martavis Bryant. The Broncos were starting to run more defenders in deep zones and showing a lot of respect for Bryant’s speed. This is the kind of adjustment a veteran quarterback brings to the field, the defense is backing off, Roethlisberger throws the ball before Bryant turns and it is an easy chunk of yards. If you look to the top of the formation, Markus Wheaton is facing tight coverage from the outside corner in this modified quarters look.

3rd quarter, 1:25. Markus Wheaton comes in motion and settles in the slot to the bottom of the screen.

The Broncos are backing off the outside receivers, and they are dropping the linebackers deeper, they don’t want to give a big gap between the linebackers and defensive backs like the above play, and it leaves Markus Wheaton room for a quick and easy 5 yards on first down.

The Broncos were struggling to account for the speed and size of both Martavis Bryant and Sammie Coates, and Ben Roethlisberger was able to use their respect for that speed to make plays.

Ben Roethlisberger is running your defense

With the defense worrying about speed, they have to start reacting faster to the ball in order to cut down the space, playing fast and aggressive leaves the defense more susceptible to misdirection, and I don’t mean motion, reverses and scheme trickery. I mean Ben Roethlisberger moving your defenders where he wants them.

3rd quarter, 2:45. Sammie Coates is the third receiver from the bottom, Heath Miller (HEATH!) is lined up just outside him.

Speed kills, but size and strength are also big weapons, and here the Steelers use Coates’ physicality to sell a quick route to Heath Miller. Roethlisberger sells it with a pump fake and Coates rolls into the middle of the field wide open.

1st quarter, 8:02. Markus Wheaton is the receiver to the top of the screen.

This is a 3 tight end set on 4th and 1. The Steelers run a play action fake with two tight ends going short, Ben quickly looks to those tight ends, pulling the safety out of the middle just a few steps, and it is enough to earn the Steelers a 50/50 ball in the end zone. Markus Wheaton can’t pull it in, but i’d take that throw with James Washington or even JuJu Smith-Schuster all day.

2nd quarter, 12:52. Martavis Bryant is the slot receiver to the bottom of the screen, Darrius Heyward-Bey is the receiver outside him.

The Broncos are trying to shut down those easy out routes, and when Ben stares Bryant down and gives a little shoulder fake, the defense crashes to Bryant, and Heyward-Bey is wide open. This play works because Heyward-Bey isn’t nearly the threat that Martavis Bryant is. This isn’t something you could get away with if it was a big time threat, but a depth receiver with speed can be dangerous on plays like this when the defense is desperate to stop the more talented play makers.

4th quarter, 11:33. From the bottom of the screen the Steelers have Martavis Bryant outside, Heath Miller in the slot and Jesse James closest to the line.

Ben Roethlisberger starts with a pump fake to Bryant on a naked screen, once the defense sees that isn’t the play, they drop quick, seeing Heath Miller running deep. But the play is to the middle of the field and Jesse James.

4th quarter, 3:00, Martavis Bryant is the receiver to the bottom of the screen.

The Broncos have Bryant bracketed and shut down. When Ben Roethlisberger starts to leave the pocket he has the awareness to sell a throw to the short route, pulling the corner out of position and giving him space to make a throw to Bryant. The poise and presence to be flushed from the pocket and still be reading multiple levels of the defense is what made Ben Roethlisberger great.

I want to re-iterate how great this defense was. No other team put up 300 net passing yards on the Denver Broncos, and Ben Roethlisberger did it twice, on a team loaded with big deep threats, even if only one of them was really good. When the Steelers had Antonio Brown on the field they threw for the most yards this defense would give up over a three year span, and beat them. With rookie Sammie Coates and special teams ace Darrius Heyward-Bey on the field, Ben still put up more yards than any other team could. The next week the Broncos would hold Tom Brady to a 56.4 passer rating and go on to win the Super Bowl.

The addition of Chase Claypool has gained a lot of coverage and hype this off-season, and I wanted to show why fans should be excited. Whether Chase Claypool is the second coming of Andre Johnson or Sammie Coates, he’s a big, physical deep threat, and he will be playing for a quarterback that uses that exact skill set as well or better than quarterback in the NFL.

Whether Chase Claypool is a star or a role player, this offense is going to benefit, because a decent deep threat in the hands of Ben Roethlisberger is a very dangerous tool. With the depth at wide receiver and the talent at tight end to go with a deep and young running back room, the canvas is set for the Steelers franchise quarterback to create another masterpiece season. All the hype is because of Ben Roethlisberger, the running backs, receivers, tight ends and coaches are just setting up a better workspace for the real star of this offense. After all the mess 2020 has been, it is shaping up to be a potentially great year for the Pittsburgh Steelers.