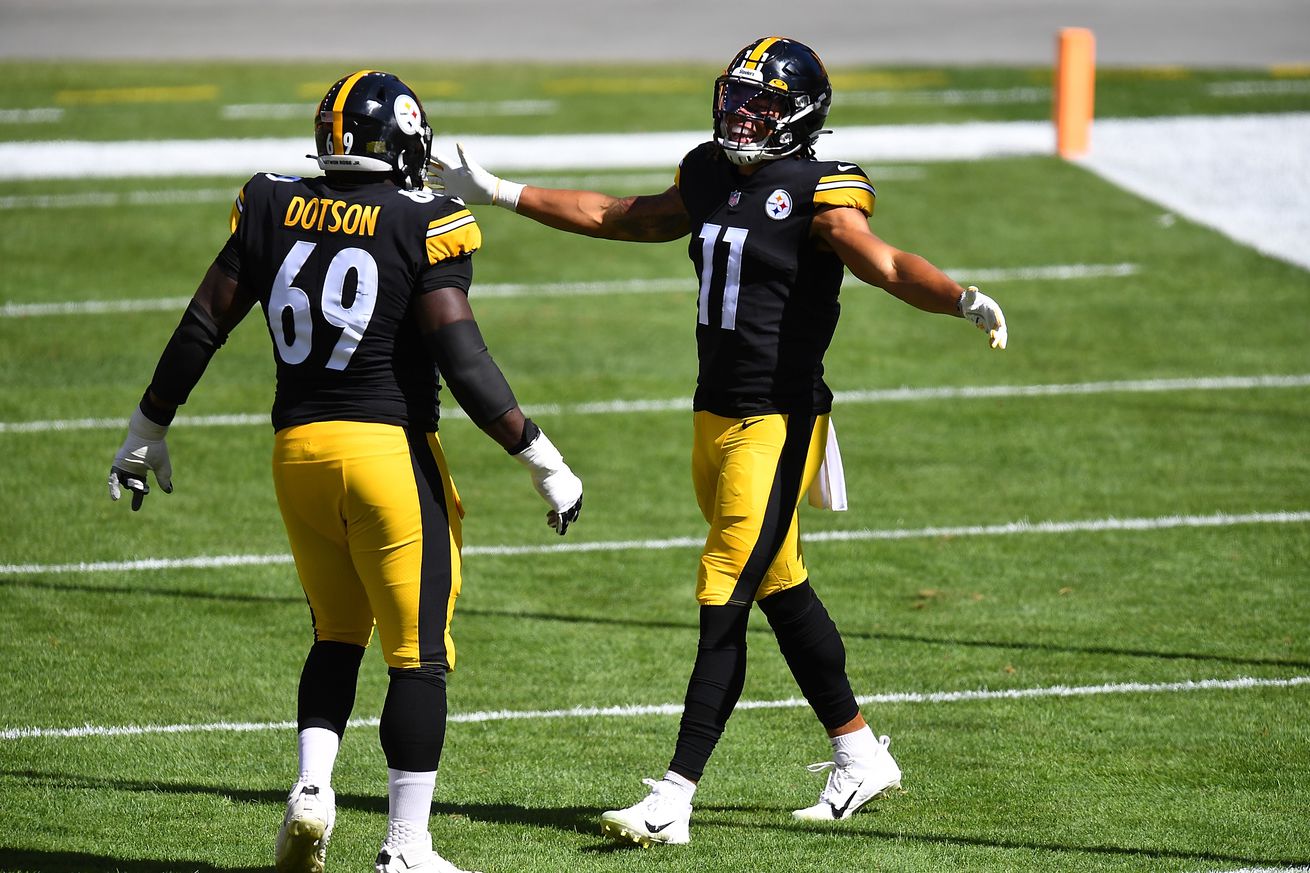 Kevin Dotson’s power and fundamentals showed up well in his run blocking, but the most important job any offensive lineman has is to keep his quarterback from taking hits. This is especially true with the Pittsburgh Steelers and their 38 yr. old star Ben Roethlisberger. As the film will show, he was up to the challenge.

In case you missed the first part of the Dotson Film Room, check out his work in the running game right HERE.

In pass blocking, same as run blocking, the Steelers sent help to Kevin Dotson’s side of the line early in the game. This time Maurkice Pouncey is looking to be of service to the rookie guard, but Dotson has his man blocked, and Pouncey is left doing nothing while the other side of the line allows a pressure that forces a high throw from Roethlisberger.

2nd quarter, 9:38, Kevin Dotson is the right guard, screen right of the center.

As the game went on, the Steelers trusted Dotson more and stopped sending as much help, letting him play to his strengths and simply neutralize a defensive tackle 1v1.

It pays off on this play as Ben Roethlisberger is able to step up out of pressure because Dotson has the front of the pocket secured.

The Steelers quickly learned they didn’t need to babysit their rookie guard, he could handle 1v1 assignments as well or better than the rest of the lineman.

Dotson showed he was very good at blocking the player across from him, but offensive lineman don’t get to just pick a man and block them, there are all kinds of tactics defenses use to attack blocking. Here’s a few the Broncos tried.

2nd quarter, 9:33. Kevin Dotson is the right guard, screen right of the center.

While Dotson excelled at locking down defensive tackles and giving his quarterback a place to step up, on two occasions he allowed an end coming at full speed to drive him back. While the ends didn’t get to Ben Roethlisberger, on this play the rusher is able to deflect the pass for an incompletion. Dotson allows himself to get too high when he absorbs the rush here, and it takes away his ability to anchor against the play, in the same way he allows himself to get too high when moving laterally on outside zone runs.

2nd quarter, 3:47. Kevin Dotson is the right guard, screen right of the center.

This is not a pass play, but I wanted to show it here because he plays this same stunt right later in the game on a pass play. Here Dotson carries the defensive tackle all the way to Chukwuma Okorafor, and it leaves him out of position to do anything against the stunt. If you look at Dotson’s feet, they end up behind Okorafor’s feet, they are almost at the same depth when the outside rusher crashes in.

3rd quarter, 12:51. Kevin Dotson is the right guard, screen left of the center.

This time Dotson pushes the tackle and stays farther up to meet the stunt, and while he gets driven back a bit, he keeps the pocket clean. It says a lot about his ability to be an NFL player that he was able to fix this problem inside of the game.

2nd quarter, 10:50. Kevin Dotson is the right guard, screen right of the center.

This snap really shows off Dotson’s sound fundamentals. While Casey is threatening to cross his face, Dotson stays square to Casey’s front shoulder, so when he reverses course into a swim move Dotson is in position to cut it off and wrap him up.

4th quarter, 14:37. Kevin Dotson is the right guard, screen right of the center.

Later in the game the Broncos would run the same rush they did when they got a batted pass, only this time the Steelers are sliding Maurkice Pouncey to the left side. Dotson does a great job adapting and driving the tackle into Pouncey, getting his arm in the way of any effort to split the two blockers. The rush in the above play and this one both start the same, and whether the tackle came fully across to attack the center, or if he cut back with a swim move, Kevin Dotson was able to handle it and keep the pocket clean.

Over the course of the game, the Broncos started avoiding Dotson entirely in their rush schemes, attacking everyone else and leaving him free. This isn’t a bad strategy, as he showed he wasn’t someone they could attack successfully with power, quickness, stunts or finesse rushes. They tried to attack his lack of experience, put him in the position of choosing what team mate to help, and which ones to trust to finish their blocks. While there were times he seemed indecisive, there were also a lot of plays where he made good decisions.

3rd quarter, 1:07. Kevin Dotson is the right guard, screen left of the center.

Dotson gives one hand of help to Maurkice Pouncey, but doesn’t commit enough that he can’t get back and help with the edge rusher, and his help buys his quarterback more time to try and make a play.

This play he saves Ben Roethlisberger from taking a big hit. He stays in-between Pouncey and Chukwuma Okorafor, and when the edge beats Okorafor with a nice spin move, Dotson is there to deliver a hit and Ben Roethlisberger is able to complete the pass and end the play both on his feet and untouched.

Kevin Dotson has played at a high level in both run and pass blocking so far in his NFL career, allowing no pressures, leading the way for a lot of good runs, and receiving the game ball in week 2 for his efforts.

He’s also most likely going to end up on the bench in week 3. It is a tough call for the Steelers coaches to sit anyone on this line, but one thing is for sure, if David DeCastro is healthy, he’s a better option to face J.J. Watt than Kevin Dotson. Matt Feiler would also seem to be safe at left guard. Kevin Dotson hasn’t played left guard, and while that isn’t a prohibitive issue, he simply doesn’t have the muscle memory to support his fundamentals on that side of the line, and while he played well, he’s still a rookie learning under fire, you don’t want to ask him to reverse his footwork as well.

I expect the Steelers are spending a lot of effort getting him ready to play whatever they may need him to do in the future, but it won’t be starting week 3 if DeCastro is able to play. It is heartening to know that the Steelers have a talented young guard they can plug into the line in case of injury, and as they budget the money for future rosters. While I am resigned to Dotson not following his college career when he took over at right guard in his second game and never relinquished it, I do expect the Steelers will find a way to get him back on the field again this season. He makes the run game better and he’s no slouch in the passing game. It’s not wise to keep a difference maker on the bench simply because he hasn’t played long enough to do everything in the playbook.