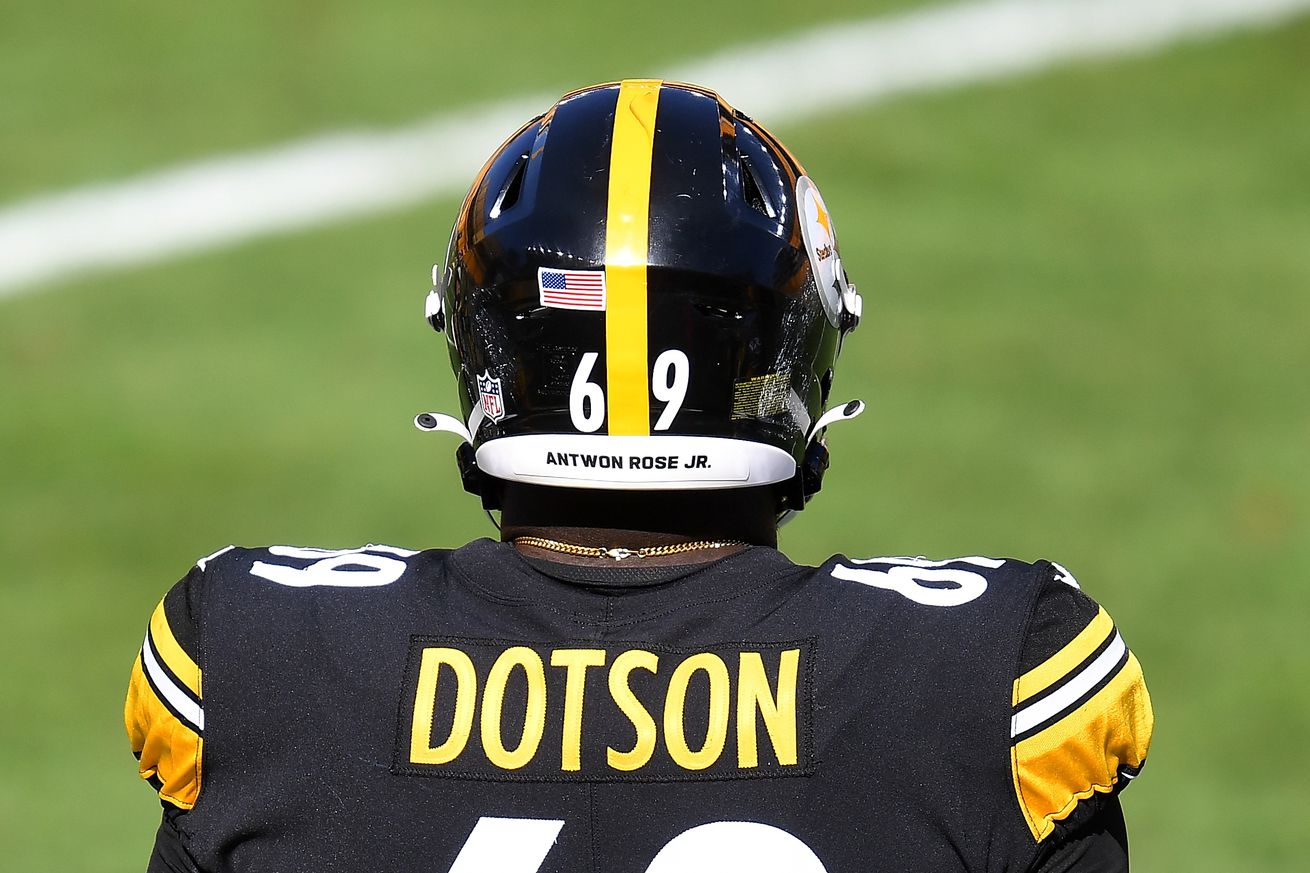 The Steelers 4th round pick made immediate impact in the ground game.

Kevin Dotson looked good in the five snaps he was forced into action at the end of Week 1. In Week 2, with David DeCastro still out and Stefen Wisniewski on injured reserve, Kevin Dotson received his first start.

That really stood out to me, because Kevin Dotson as a redshirt freshman in college was on the bench for his first game, but was pushed into action due to injury. He started Week 2 and every game after that until he left as a 5th year senior after the 2019 season. Every single one of those games he played right guard.

When he joined the Steelers the road wasn’t going to be easy for Dotson, With DeCastro entrenched at right guard, Matt Feiler and Stefen Wisniewski in front of him at left guard, a position he hasn’t played, it was unlikely Dotson would see the field. And yet, there he was, playing right guard at the end of his first NFL game, and starting there week two. You could see his experience at that position show up immediately, as Dotson looked comfortable and confident all day. He also lived up to his reputation as a road grader, moving defenders out of run lanes for James Conner.

1st quarter, 5:54. Kevin Dotson (#69) is the right guard, to the left of center Maurkice Pouncey on the screen.

Early on in this game, the Steelers were making sure they had help for Kevin Dotson, here you see Pouncey looking to help before getting up field to block a linebacker. Jurrell Casey’s outside move leads to Pouncey moving on, and Dotson does a good job keeping Casey from getting back into the play. Jurrell Casey has made the Pro-Bowl for the last 5 seasons, and is known for his agility, quickness and skill at defeating solo blocks, while possessing the power to hold up against double teams. Dotson is able to keep Casey from getting back into the play and Casey ends up on the ground.

This is pure dominance. Kevin Dotson goes full on Clark Kent here and turns into Superman in a phone booth. Not only does he get into the end zone while driving two linebackers backwards, his help on the block Chukwuma Okorafor throws on veteran Shelby Harris (#96) was immensely impactful, take a closer look:

Watch #96’s right leg, Harris wins the initial contact and is starting to drive Okorafor back. When Dotson makes contact Harris’s right leg comes down almost at the goal line, and with the advantage the help gives him, Okorafor drives him back further, so that when Conner hits the goal line, Harris’s right foot is in the end zone, Harris can’t do anything to stop the score, and neither can the linebackers Dotson is driving back. Matt Felier and Maurkice Pouncey win their double team block, but the two of them don’t move Mike Purcell as far as Harris is moved.

BTSC’s own Kevin Smith remarked about the play “That’s beautiful. He’s just playing lower and with a wider base than everyone else.”

Kevin Dotson gets his shot at Broncos nose tackle Mike Purcell on this run, and moves him several yards out of position. At the same time Matt Feiler struggles to control Jurrell Casey and Casey limits the run to a 2-yard gain. This play shows one of the problems the Steelers offense had early against Denver. Watch Maurkice Pouncey, he is sent to help Kevin Dotson with a chip before moving to the second level to engage a linebacker. Dotson didn’t need the help. If Pouncey is putting a chip on Jurrell Casey, Feiler likely contains Casey and Conner would have had a beautiful lane and the chance for a big gain. The Steelers were sending help to the rookie, but he didn’t need it. Both Matt Feiler and Allejandro Villanueva could have used help a number of times in the first half, and didn’t get it.

As a side note, look at the jet sweep action from Chase Claypool with Eric Ebron coming with him. Ebron’s cut block on the backside pursuit was a good one. The Steelers are setting up multiple threats on these runs, and on this play the Steelers take the backside end and linebacker out of the play and delay the safety’s reaction to the run with just Ebron and Claypool.

3rd quarter, 1453. Kevin Dotson is the right guard, to the left of center Maurkice Pouncey on screen.

Another big win by Kevin Dotson, this time in a 1v1 block against Jurrell Casey. The problem on this play is Conner misses the lane created by Dotson along with a great combo block from Pouncey and Matt Feiler. Conner heads to his left (screen right) where three defenders wait for him. If Conner runs right at Dotson on this play the defense has one defender and two lanes for him to defend. Take a look at the moment Conner is handed the ball.

Dotson is blocking #99 Casey, Pouncey is peeling off the combo block to reach #47, and off-screen JuJu Smith-Schuster has the CB. Safety Justin Simmons (#31) is the only defender Conner needs to worry about, and he’s 7 yards beyond the line of scrimmage. There’s yards there if Conner reads the blocks and runs toward Kevin Dotson. You can even see Dotson deny Casey when Casey tries to shed his block later in the play. That is a guy you run to.

Again notice the jet sweep pulling the defensive end out of the play, and stalling the linebacker (#45) as well as the strong safety. When Conner cuts into the middle the linebacker that was pulled out of position by the sweep motion is back in the play.

Kevin Dotson gives Pouncey help and then walls off other defenders for Conner to gain 5 yards on first down when the Steelers were trying to run out the clock and end the game.

As a run blocker Kevin Dotson proved he was one of the more reliable lineman the Steelers have, at least in the role he played in week 2. The Steelers limited what they asked the rookie guard to do, and sent help his way a lot early on in the game. But Dotson showed he didn’t need that help, while well-regarded veterans showed they did.

Kevin Dotson had a few plays that didn’t go well, the ones that stand out were on outside zone runs, something Joe Rowles, our guest on last weeks Know your Enemy podcast, remarked that the Broncos were very good defending. Here’s two examples:

The Broncos read Conner well here, and trap him inside for a short gain, Dotson spends the play unable to find a player to block.

Dotson is trying to move laterally and gets driven back by the Broncos defensive tackle, forcing James Conner up and into the pile, where he is able to grind out a few yards.

This is the one weakness that really stood out in Dotson’s run blocking, he’s not as good when he is moving laterally, he gets a little higher in his stance, and can be driven back. But when he is in a phone booth and it’s a game of power, Dotson is the best blocker on this team. He’s a lot like Ramon Foster in that regard.

Stay tuned for Part 2 of this film room, it will cover Dotson’s play in pass protection, and discuss his role on the Steelers going forward.